With the development of winter hardy canola varieties, Oklahoma producers have the option of rotating canola with wheat to break the weed and disease cycle, while potentially increasing wheat yields.  Production of canola also provides an income source outside of the typical grain market for Oklahoma producers. The interest in canola production has prompted many questions about storage methods for Oklahoma conditions.

Ripe canola varies in moisture and oil content. When placed in storage, moisture content and seed temperature determine the amount of drying and cooling necessary to prevent spoilage. Canola undergoes a period of extended respiration or “sweat,” producing heat and moisture for six to eight weeks after harvest. Aeration and intensive monitoring are required to prevent quality loss. 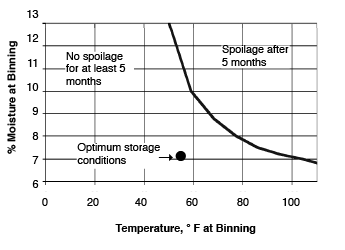 Figure 1. Safe and spoilage conditions for canola adapted from Mills (1996).

Broken seeds, pods, dirt, and other debris (also known as “dockage”) make aeration more difficult by reducing airflow through the seed and can effect seed moisture content. Surface debris in storage also attracts insects. Insect development and activity cause excess heat and moisture which encourage mold growth. Broken seeds provide additional opportunity for mold growth, which increases respiration rate. Therefore, seed should be cleaned to less than 2.5 percent foreign material before storage. Canola can be cleaned by a number of different methods, including air aspiration, indent cylinder cleaning, sieve screening, or a combination of these methods.

Equilibrium relative humidity (ERH) is the point at which there is no exchange of moisture between the seed and the surrounding air.  Mold begins to grow when the ERH is above 60 percent. Temperature and seed oil content determine the ERH of the stored canola. Canola varieties available for Oklahoma usually contain oil between 35 percent and 45 percent. Table 1 shows the ERH for canola with 40 percent seed oil content at various temperatures and seed moistures.  The shaded area shows the seed moisture content percentage for optimum conditions to prevent mold growth and seed damage due to handling.  For example, a seed temperature of 80° F must have a moisture content of 7.6 percent or less to have an ERH less than 60 percent.

Lower seed moisture and lower oil content allow storage at higher temperatures. However, at temperatures greater than 77° F for longer than a year, excessive free fatty acid may form.

Other factors that reduce the quality of stored canola include free fatty acid (FFA) production and oil color changes. FFAs cause oil to go rancid quickly. FFA levels increase as a result of the hydrolysis of triglycerides and cause off flavors in the oil. Even when the conditions provide little risk of mold growth, these oil quality changes can occur. High temperature is the cause of FFA production and oil color change. Freshly harvested canola seed typically has FFA levels less than 0.5 percent. However, storage above 77° F for extended periods of time (longer than one year) may cause levels to rise above 2 percent. These high levels of FFA can be reduced during refining but the process is expensive. This makes canola seed with FFA levels above 1 percent less desirable to buyers. Therefore, it is important to cool canola seed to below 77° F as soon as possible after harvest.

Aeration systems properly designed to provide adequate uniform airflow provide a cost effective way to cool and store canola in Oklahoma. Round steel grain bins are well suited for storing canola. They are easy to maintain and to seal against weather and pests.  The floor should accommodate an aeration system, preferably with full perforation. Extension Fact Sheets BAE-1102 and BAE-1103 provide information for the design of aeration systems for flat-bottom and cone-bottom round bins, respectively. Because canola seed is much smaller than wheat and other cereal grain, fine mesh screen (such as window screen) may be placed over the floor perforations to prevent seed leaking through the perforations.  Bins should be equipped with temperature and relative humidity monitoring equipment.  If this equipment is not available, weekly testing with a grain probe is essential.  Extension Fact Sheet BAE-1101 gives aeration and grain cooling information for Oklahoma.

Air flow may be positive pressure (upward) or negative pressure (downward).  Positive pressure is generally preferred for canola storage because operating the fan as the bin begins filling helps keep the floor perforations open. However, condensation may occur on the underside of the roof during cool weather in an upward flow system if adequate roof ventilation is not provided. Cross-ventilation in the headspace can remove this moisture. In a negative pressure system, warm summer air is pulled down into the grain.  If new seed is added to the bin, the heat from the new seed is pulled down into the previously cooled seed requiring it to be cooled again. In addition, negative pressure systems can cause more packing with canola seed and increase the static pressure. Figure 2 shows the two different air flow directions.

Being able to reduce seed moisture content in the bin provides producers more options for harvesting.  Canola can be harvested above 10.1 percent moisture content.  Harvest can be started earlier with higher moisture levels to reduce mechanical losses from pod shattering (Thomas 1984).  Bin aeration can be used to dry the seed to the proper storage moisture content but increased airflow rates are required.  Typical airflow rates for drying range from 0.4 to 2 cfm/bu.  These higher airflow rates increase the static air pressure.  Table 2 shows the static pressure for canola with fan airflow rates of 0.75 and 1.0 cfm/bu at several grain depths.  Canola that has been in a negative pressure storage system may become packed.  Static pressure can double for packed seed.  Static pressure due to canola seed plus the static pressure due to duct work must be considered when selecting fans.   Extension Fact Sheets BAE-1101, BAE-1102, and BAE-1103 provide additional aeration system design information. The static pressure of canola is up to two to three times that of wheat.  Therefore, if an existing aeration system designed for wheat is used for canola, check the velocity and pressure ratings of the system to ensure adequate airflow.

Two types of fans are available for grain bin aeration.  Axial type fans are adequate for static pressures less than about 5 inches of water.  Centrifugal type fans are more expensive but give more consistent air delivery over a wider range of pressures.

The airflow pattern in a bin with a fully perforated floor and a leveled grain surface will provide even air distribution unless debris and packed grain have gathered under the filling spout.  If this is the case, coring the bin or pulling seed from the center of the bin will help to reduce the problem.  Uneven airflow patterns will leave moisture pockets that can cause mold and hot spots resulting in spoilage of the surrounding seeds.  Stirring or moving the seed will help reduce these problems.

When drying canola, the fans should be run continuously until the desired moisture level is achieved even if the relative humidity occasionally spikes.  This ensures the drying front will continue to move through the stored seed.  The moisture will redistribute through the seed and spoilage should not occur.

Heated air drying can be used if available. It is much faster but more expensive than natural air drying. Care must be taken to control temperatures. Canola seed to be used for future plantings should not be subjected to temperatures over 113° F. Seed used for oil extraction can be dried at temperatures up to 180° F. Over drying can cause cracking of the seed coats plus increase free fatty acids. If high-temperature batch and continuous flow dryers are used, two passes may be required if initial seed moisture content is above 17 percent. The drying process will be quicker and more consistent through the grain bed if the grain depth is less than 10 ft (Mills 1996). For seed moisture contents below 15 percent, natural air and low temperature drying should be adequate.

The surface of stored canola is the primary area of attack.  Insects are attracted by trash, broken seeds, and fine material that accumulate on the surface.  Cleaning seed before storage will reduce infestations.

A good plan for controlling insects and mites in canola includes the following:

Equipment used for cereal crop production may be used to handle canola.  Since the seed is small, holes in truck beds, grain carts, and combines must be plugged with tape or caulk to prevent seed loss.

Canola has an angle of repose of 22°, compared to 28° for wheat.  This difference causes seed to flow more readily and may cause additional force on the sides of carts and bins.  Care must be taken to load canola evenly throughout the bin to prevent buckling.

CR-1726 Grain Bin Entrapment:  What If It Happens To You?

The 2018-2019 canola performance results can be determined by factors like asield, shatter rating and oil content to name a few.

The reasons canola and wheat are different include things like increased sensitivity to drought, cold stress and soil acidity.

The history, properties and applications of canola oil used worldwide.