Grain Bin Entrapment: What If It Happens to You? A Case Study from an Oklahoma County Elevator

A man unloading wheat from a grain bin was trapped for nearly five hours when his foot became caught under the side of a sweep auger motor and he was buried in grain above his waist. The following information was collected from elevator personnel and rescuers involved in this grain entrapment incident. The names and location of the elevator are not listed to protect the privacy of the people involved. This report illustrates how this type of incident could occur at other grain handling facilities, and provides safety guidelines that could help other elevators avoid this type of situation or react more positively if a grain entrapment should occur.

On January 25, 1994, an Oklahoma country elevator was unloading wheat from a 200,000-bushel, corrugated steel bin. The wheat had drained to a level that exposed the sweep auger and motor installed at the bottom of the bin. Three drain sumps underneath the conveyor from the center to the bin wall near the side entry door were open, leaving an irregular cone of wheat sloping up from the center of the bin on three of the four sides.

At about 11:30 a.m., a worker entered the bin to plug in the sweep auger motor. The worker stood on top of the motor while unwrapping the cord from around the motor in order to plug it in. While unwrapping the cord, his foot slipped off the motor into the grain and slid under the side of the motor. When his foot slipped off the motor it triggered a grain slide. Instantly, grain began to flow around his leg. His foot wedged under the motor, and he could not pull his leg out of the grain. As he struggled to remove his foot, more grain began to flow which buried him deeper in the wheat. Within a few seconds, the worker was trapped in the sitting position with grain above his waist.

Two co-workers were observing the victim as he became entrapped. Immediately all electrical power to the unloading equipment was shut off and secured so that it could not be restarted (locked out and tagged out). One worker went to notify the elevator manager who called the local fire department. The other remained at the grain bin and kept in communication with the entrapped worker. The local fire department notified other surrounding fire departments and emergency rescue teams. Because of the remote location of the elevator, the first fire department rescue team arrived on site about 30 minutes after notification. Area farmers and workers were also notified. Several farmers were already at the elevator.

Elevator employees and farmers at the site tried to decide what to do. They began collecting material to build a retaining wall around the victim to prevent grain flow that would submerse the victim further under the grain. One farmer brought an acetylene torch to cut a hole in the bin.

Fire and rescue teams and a highway patrolman arrived on the site. The patrolman eventually took control of the assembled personnel outside the bin, while a fireman took control of the operation inside the bin. The decision was made not to cut a hole in the bin with a torch for fear of triggering a grain dust explosion or igniting a fire. Eventually, a tractor front-end loader was used to puncture the side of the bin to drain the grain out on the ground.

None of the rescue teams had formal training in grain bin rescue operations, but some had practiced trench rescue operations. They applied the trench rescue techniques to this bin rescue. Paramedics stayed close to the victim. They informed him of what was going on, provided high flow oxygen through a non-rebreather mask, and gave him an I.V. of a saline plasma to maintain body temperature when the victim complained of being cold. The victim remained calm and in good condition throughout the rescue.
A retaining wall was built on the high sides of the grain out of lumber ranging from 1-inch by-12-inch boards to 4feet by 8 feet sheets of plywood. When the hole was ripped in the bin wall on the “high” side of the grain with the front-end loader, grain began to flow out of the bin; but more grain also began to flow down around the victim. This was caused by both the vibration from the impact of the front-end loader against the bin and the flow of grain out of the side of the bin. Workers scooped grain away from the victim and out of the bin. A portable grain vacuum conveyor brought to the elevator was used to speed up the grain removal process next to the victim, reducing the manpower needed for hand scooping.

Three sets of retaining walls were finally established at spaced intervals away from the victim (Figure 1). The vacuum conveyor removed grain from inside the wall closest to the victim until wheat began to flow underneath the wall. Then, grain was removed from inside the next retaining wall. This process was repeated until the walls could be pushed further into the grain, and grain removed again from the wall closest to the victim. Several people were used to hold the retaining walls against the pressure of the grain on the back side of the walls. The rescuers attempted to use a round bale hay gate as a retaining wall, but half of it turned up on end because of the unequal pressure from the grain. 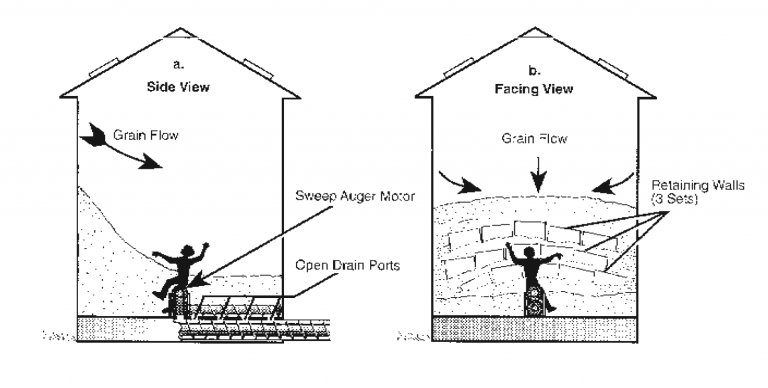 Figure 1. The initial grain flow trapped the victim’s foot against the sweep auger motor, then proceeded to bury him above the waist (a). Three sets of retaining walls were established to prevent further grain flow around the victim and aid in grain removal with a vacuum conveyor (b).

Rescuer protection was maintained by rotating workers in and out of the bin to give them a rest. Dust masks were worn and changed out periodically to protect against dust inhalation.

The victim was finally freed when all of the grain around his foot was removed, allowing him to move his foot sideways and pull it out from under the sweep auger motor. The victim was carried out on a stokes basket and taken to a hospital. The victim suffered minor tissue damage from the pressure of the grain on his leg and foot, but has no apparent permanent injury. It took approximately five hours to remove the victim from the grain bin.

The elevator workers, emergency rescue team members, and other personnel involved in this rescue are to be commended for their success in rescuing a healthy worker from a grain bin entrapment incident. Many things were done which aided in the success of the operation:

The grain elevator where this incident occurred is taking action to prevent similar occurrences. Managers are having a stand made for workers to use when they are in the bin. This will keep them out of the grain while plugging in the sweep auger. This stand will straddle the sweep auger and provide protection for workers by keeping them above both the grain and auger.

Knowing that a grain dust explosion was not a threat when using a cutting torch to cut steel covered with grain would have assisted the rescuers. A confined space with specific dust concentrations, as might be found in an operating grain leg or grain dump pit, is required for combustion of grain dust. This is not the case along the side of a filled grain bin. Hard red winter wheat typically contains a maximum of 0.6 pounds of dust per ton of grain. Concentrations of dust required for explosions with wheat dust are at least 50 grams of entrained dust per cubic meter of space. For explosions to occur, the dust must be entrained or uniformly suspended in the space. Most loose dust in stored wheat settles under the fill point and sifts to the bottom. Wheat against a bin or tank sidewall has very little grain dust and the dust is not entrained in the air, so there is no threat of a dust explosion.

Even though a dust explosion is not a risk when using a cutting torch, grain could catch fire and smolder or burn slowly under the right conditions (high temperature and relatively low moisture). The grain in this bin was in good condition and cool, so a fire was unlikely. However, a fire extinguisher or water hose should be on hand to put out any fires that could occur when a cutting torch is used to cut bin wall openings. Knowing that a dust explosion could not occur would have allowed a hole to be cut quickly in the side of the bin with a cutting torch or saw. The speed with which grain can be removed is more important the deeper the victim is buried in the grain.

A second factor which could have expedited the rescue was previous training on grain bin rescue operations. Grain elevators and local fire departments need to work together to practice on-site rescue operations and educate employees and rescuers about proper actions and techniques to use in case a grain entrapment occurs. Elapsed time is vital. Knowing the proper course of action can reduce rescue time and give workers and rescuers confidence in the difficult decisions they must make during a bin rescue emergency. Grain elevator workers should have needed rescue
equipment on hand or know where it is located and how to acquire it quickly.

Establishing effective command and control is essential in minimizing rescue time and conducting a successful rescue operation. Lack of a well-defined authority can hinder the efforts of rescue workers. Information on the status of the victim, resources available, and current activities taking place must be quickly and accurately conveyed to the rescue team upon arrival. The rescue team should then establish an
incident command post and assign an incident commander.

Emergency rescue teams should be familiar with the Incident Command System, a standardized emergency management system developed to organize and manage all the functions required to deal with an emergency situation.1 This system is designed to allow the leader to command the incident and to prevent the incident from commanding the leader. An incident commander should be assigned quickly to establish a final authority for all decisions. Specialists and those familiar with the site should act as advisors to the incident commander to assist in making decisions about the rescue operation.

Failing to establish leadership and command roles is a common problem with rural rescue operations and occurs when more than one jurisdiction or agency is involved in an incident. Mutual aid agreements between rescue teams in the same response area can define roles and responsibilities to reduce the potential for disagreements and problems and minimize response time.

Elevator managers should check with local emergency rescue teams and assist them in pre-incident planning. A pre-incident plan involves developing and maintaining a
written plan for response to and management of a rescue.1 It allows information to be gathered and for as many decisions as possible to be made before an incident occurs. This will help the rescue team in managing the incident, rather than simply reacting to it. Once again, practicing a rescue operation on site with multiple rescue teams is invaluable training for both the elevator and rescue personnel, and it enhances total
community preparation for when an incident does occur.