Mechanical dockage testers are used in the grain grading process to remove dockage from wheat, corn, grain sorghum, rye, barley, flax, and other grains.  In wheat, the Kicker® also separates the shrunken and broken kernels (SBK). Dockage machines produce more accurate and consistent results and save time compared to hand sieving.  As the machine removes the dockage, the grader may complete other grading tasks.

The purpose of this fact sheet is to describe the set-up procedures for the MCi-Kicker® 3-screen and 4-screen machines for use in grading wheat, grain sorghum, soybeans, and corn.

Dockage is seeds, weed stems, chaff, straw, sand, dirt, and any material other than the predominant grain which can be removed readily from the grain by use of sieves and cleaning devices.  Elevators that do not accurately measure dockage lose money by paying grain price for non-grain material. In addition, the grading procedures for many grains, including wheat, triticale, sunflower seed, rye, flaxseed, and barley, specify that dockage must be removed before determining test weight.  Elevator operators handling these grains that do not effectively remove dockage underestimate test weight and may assign incorrect grades.

The net effect of failing to correctly remove dockage depends on the grain price, grade premiums and discounts, and dockage discounts.  In most cases, elevators that underestimate dockage are losing money even if the numerical grade is lowered due to test weight.  Research indicates a dockage machine will pay for itself with 25 loads of 15 percent or higher dockage.  The same research indicates that producers delivering high dockage grain are overpaid and producers delivering clean grain are underpaid.

Material other than corn in corn and sorghum in sorghum is classified as FM.  FM is counted in both the broken corn and foreign material (BC (BN) & FM) category and the FM categories.

There is no dockage category in soybeans.  Material other than soybeans is counted as FM.  The MCi-Kicker® may be used to assist in the determination of FM in sorghum, soybeans, and corn.

The Kicker® uses an aspirator, a riddle, and two screens to separate the wheat from the dockage and SBK (Figure 1). 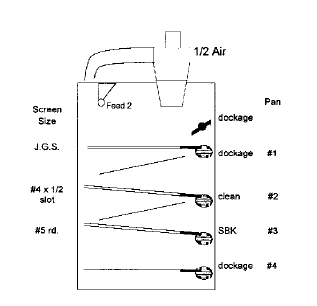 The Standard setup for wheat is:

To help keep the screens clean, rubber balls have been placed under the screens.  Machine movement causes the balls to bounce against the screens to keep them relatively clean.

The J.G.S. riddle is used to remove large stems and other none wheat material.  Additional dockage and the SBK are removed with the #4 slotted and #5 round-hole sieves.

The following are the steps for grading a wheat sample using the MCi-Kicker®:

The most common mistake is forgetting to dump the dockage removed by the aspirator into the top pan (#1).  Turn off the machine before emptying the aspirator.

The next step most often missed is not pouring the SBK from pan #3 into the good wheat pan (#2).  If the SBK is not added to and mixed with the good wheat, test weight will be overestimated.

There are no special settings for the MCi-Kicker®. However, if the sample contains excessive amounts of cheat (dockage) there may be more dockage in the SBK pan than wheat.  In this case, the contents may be poured into the dockage pan (#1) rather than the good wheat (pan #2).

If the sample contains an excessive amount of dockage (cheat), the air setting may need to be increased.

The Federal Grain Inspection Service has only approved the Carter-Day® Dockage machine for use in determining “official” grades.  Experiments with the MCi-Kicker® indicate that the dockage and SBK levels determined with both machines are comparable.  Commercial elevators may use any mechanical dockage tester that produces comparable results with “official” grades.

The Kicker® set-up for grain sorghum is nearly identical to wheat (Figure 2). Some elevators use the same screens. But to get grades that will come closer to official, the JGS riddle is replaced with a # 12 round-hole sieve. 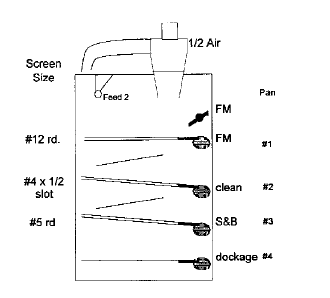 The Standard setup for grain sorghum wheat is:

The steps for grading a sorghum sample using the MCi-Kicker® are:

There are no special settings.  If the sorghum has excessive amounts of FM, the air may be increased to remove more via aspiration.  Care must be taken that whole kernels of sorghum are not removed. 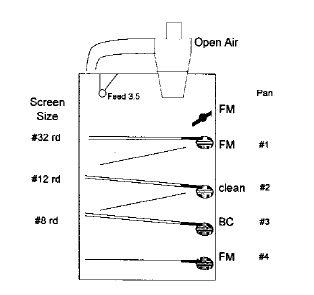 The standard setup for corn is:

Note that the # 12 round-hole sieve used for corn is a fine (short) sieve and is different from the # 12 used with sorghum.  As with the wheat and sorghum MCi_Kicker® screen placement, the #2 slot is blank.

Test weight is determined before removing FM and dockage. 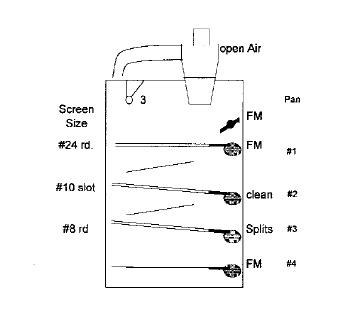 The suggested screens and settings for the MCi-Kicker® and soybeans are:

Both the 3-screen and 4-screen models have four pans.  From the top, the pans contain FM (empty aspirator), clean beans, splits, and FM.

MCi-Industries modified the air setting control in 1999.  Kickers manufactured after 1998 have the air control setting at the back of the airflow tube.  The settings are from 1 to 10.  Open air is 1 and closed air is 10.  Refer to the owners or operators manual for air settings.