This publication provides practical procedures which can be used by producers, warehouse managers, and elevator managers for sampling and grading soybeans. The procedures and portion sizes are based on the USDA Practical Procedures for Grain Handlers. The portions and hand-sieving methods presented in this Current Report are not used by official grain inspectors licensed by the Federal Grain Inspection Service. Licensed graders should use larger portions and precision mechanical equipment that will provide the most accurate and most uniform results.

Obtaining a representative grain sample is an essential part of grain inspection. Without a representative sample, the final grade will not reflect the true grade or value of the grain. In order for a sample to be considered representative, it should:

The following pages explain the proper way to do probe sampling. Some of this information was taken from: Inspecting Grain-Practical Procedures for Grain Handlers, Sec. 1, Sampling Grain.

Before learning the sampling procedure, the sampler should be familiar with the equipment used.

Hand Probe: This standard piece of equipment, sometimes referred to as a trier, is constructed of brass or aluminum. Probes come in various sizes with standard lengths of 5, 6, 8, 10, and 12 feet. The type of carrier dictates which probe length shall be used. There are two types of hand probes: compartmented probes in which slots in the outer tube match compartments in the inner tube and open throat probes in which the inner tube is open. Open-throat probes tend to draw more of their sample from the top portion of the grain while compartmented probes draw a representative sample from each layer. All official grain probes are compartmented probes with a 1-3/8 inches in diameter (outer tube). Make sure the probe reaches the bottom of the carrier. A 5 or 6 feet probe will be sufficient for most farm trucks while hopper-bottom carriers may require a longer (6, 8, or 10 feet) probe.

There are two types of mechanical probes which are recommended for sampling stationary lots of grain in trucks, railcars, or other open-top carriers. The gravity-fill probe function is similar to compartmented hand probes except that after the compartment is filled it rotates to an inner tube where it is forced up by air. The core probe functions by forcing the sample up into the core as the probe is pushed down and then using air to transport the sample to the output point. A third type, the in-load suction probe which uses negative air pressure to suck the sample into the bottom of the probe, is not recommended since it tends to overestimate foreign material.

Heavy canvas cloth or similar material can be used to display the sample from the compartmented probe.  Another alternative is a short section of rain gutter, half section of pipe.  The sampling canvas or other material should be at least 6 inches longer than the probe used to draw the sample.  This size is necessary so that the grain from the entire length of each probe will not spill off the ends of the canvas.  Sampling canvases must always be kept clean, dry, and free of holes.

Sampling Containers such as heavy cloth or canvas bags and metal buckets or plastic cans may be used to transport the sample to the inspection station.  Sample containers should be free of all old grain, insects, and other waste material prior  to use.  Air-tight containers or bags lined with a polyethylene liner should be used to store grain to prevent loss of moisture and to protect the sample from adverse environmental conditions such as rain or humid weather.

There are several ways to insert the probe into the grain. Regardless of which technique you use, the general rules are:

Draw at least two samples from any truck or trailer that are 600 bushels or less. Larger lots of grain should be probed in 3 to 5 places. Recommended probe sites, which are shown in Figure 1, are anywhere in the carrier except the corners and the center of the load (which was directly underneath the loading spout). The probe sites should be varied between loads in a random manner. Elevators which routinely sample in the same location have found that bad grain seems to migrate to the areas in the load which are not sampled. Hopper-bottomed carriers should be probed in the center of each hopper (Figure 2). 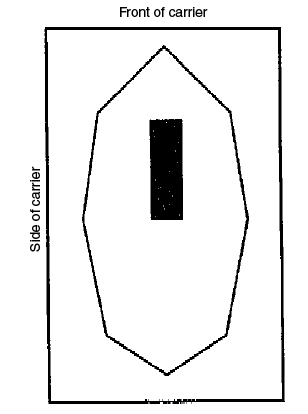 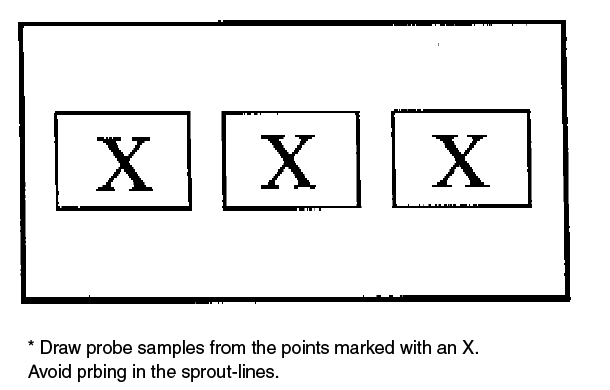 The process of inspecting soybeans begins when the sample is drawn and follows a prescribed path:

Use the probing procedures described above, or a tailgate sampler or other method, to obtain a representative sample of approximately 1,000 grams.

Except for smut or garlic odors, soybeans which have a musty sour or commercially objectionable foreign odor (COFO) is “U.S. Sample grade.” Use the entire sample to determine odor. Fumigant or insecticide odors are not considered COFO if they dissipate after aerating the sample for up to 4 hours. The presence of two or more live insects injurious to stored grain causes the grain to be designated “infested,” but does not affect the numerical grade. Heating is a condition common to grain which is spoiling and also causes the grain to be designated “U.S. Sample grade.” Be careful not to confuse heating with sound grain which is warm due to storage in bins, railcars or other containers during hot weather. Other harmful substances which can cause the grain to be considered U.S. Sample grade include: rodent pellets, castor beans, crotalaria seeds, glass, stones, and unknown foreign substances such as rock salt, or fertilizer.

Moisture is an essential measure of soybean storability and value and should be determined prior to removing dockage. Moisture can be determined with any device which has been tested and approved by the Oklahoma Department of Agriculture. Moisture meters should be certified once a season and maintained in adherence with the manufacturer’s recommendation. Many moisture meters (such as the Montomco) require that a specific weight sample be used. The use of an inexact sample weight will result in an inaccurate measure of moisture content. Additionally, some of the newer moisture meters also display an estimate of test weight. This test weight estimate cannot be legally used in determining grade since it is based on a small sample size (often 100 grams or less).

Test weight is a measure of the weight of grain required to fill a specific volume (pint, quart, or bushel). To determine test weight, pour the entire dockage free sample through a funnel into a kettle until the grain overflows the kettle. Level off the kettle making three, full-length, zigzag motions with a stroker. The test weight is determined by weighing the filled kettle on either a special beam scale, an electronic scale programmed to convert gram weight to test weight, or a standard laboratory scale. If a standard scale is used, the gram weight must be converted to test weight per bushel (multiple the grams in a one quart kettle by .0705 to obtain the test weight in pounds per bushel).

Step 5 – Determination of Foreign Material in Soybeans by Hand Sieves

Repeat the operation five times. The foreign material will consist of: 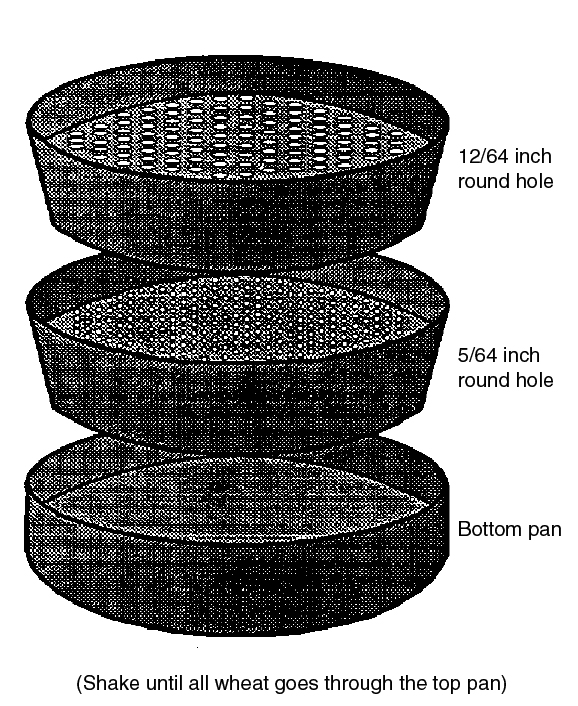 The percentage of split soybeans also affect the USDA grade; thus, the value of the beans. The maximum percentage splits for determining grade are 10% for #1, 20% for #2, 30% for #4 and 40% for #5. A split is any sound soybean that has more than one-fourth broken off.

The most common types of kernel damage are drier damage, germ, frost, heat, mold, scab, sprout, and insect damage. The percentage of damaged kernels is determined by handpicking a 125-gram sample. Stinkbug stung damaged kernels are kernels which, when cross sectioned, show damage caused by stinkbugs. Consider stinkbug stung-damaged kernels at the rate of one-fourth of the actual percentage.

Soybeans that are discolored by the growth of a fungus, dirt, dirt like substances including nontoxic inoculants or other substances are designated purple mottled and stained and can be graded no higher than U.S. No. 3. The percentage of purple-mottled and stained soybeans is determined by handpicking a 125-gram portion.

Step 6 – Soybeans of Other Colors

Soybeans are divided into two classes based on color: yellow soybeans and mixed soybeans. There are no subclasses in soybeans. Class is determined by handpicking a 125-gram portion.

CropsGrains & OilseedsSoybeans
Fact Sheet
What if Engenia®, FeXapan® or Xtendimax® are Not an Option for Soybean Weed Control?

A summary explaining the purpose of various herbicide products used in soybeans.