Recent analysis of soil samples submitted to the Soil, Water and Forage Analytical Laboratory (SWAFAL) at Oklahoma State University indicates approximately 24 percent of Oklahoma wheat fields have soil pH lower than 5.5. Low soil pH in wheat fields is often caused by long-term use of ammonium-based fertilizers, which releases hydrogen ions and decreases surface soil pH. Soil pH levels below 5.5 increases the solubility of toxic aluminum in the soil solution, which has detrimental effects on wheat growth. The main effect of active aluminum is decreased root growth, which reduces the capacity of roots to explore the soil for water and nutrients. As a consequence, wheat becomes stunted, resulting in reduced forage production and grain yield. Early-season wheat growth and forage production is generally more affected by soil pH than grain yield, so the penalty for low soil pH is often greater for dual-purpose or forage-only wheat farmers than for grain-only producers.

The recommended practice to correct low soil pH is to apply agricultural lime based on soil test recommendations (Zhang and Raun, 2006). However, lime application does not always result in increased wheat grain yield and the cost of liming can sometimes be a limiting factor in the budget of a wheat farm. Changing soil pH is not always a rapid process. It sometimes take a year or more to fully realize the effects of agricultural lime, so the economics of broadcast lime on rented ground can be greatly influenced by the lease duration. Banding of phosphorus (P) fertilizer in-furrow at planting is an alternative strategy often implemented by farmers to reduce the negative effects of low soil pH. In-furrow P fertilizer can result in increased wheat growth and forage production in low pH soils by reducing aluminum toxicity and increasing the amount of readily available P to the crop.

An on-farm study was conducted for three wheat growing seasons near Waukomis to compare the effectiveness of in-furrow pelletized lime with other common practices to ameliorate low soil pH problems. Initial soil pH was 4.9, and treatments were in-furrow pelletized lime at planting at 200 lbs/A/yr or 400 lbs/A/yr, in furrow triple super-phosphate (TSP, 0-46-0) at 25 lbs/A/yr or 50 lbs/A/yr, and agricultural lime broadcast and incorporated at 2,000 lbs or 4,000 lbs of effective calcium carbonate equivalent (ECCE) per acre. Broadcast lime treatments were applied prior to planting the first year of the study and were not repeated in subsequent years. All the treatments were replicated four times and compared to a non-treated control. Nitrogen fertilizer, insecticide, herbicide and fungicide were managed to ensure optimal conditions for wheat growth and development and avoid confounding effects other than the treatments.

The spatial extent which pelletized lime effectively increased soil pH was evaluated by opening vertical trenches perpendicular to wheat rows after wheat harvest, taking pH measurements at constant distances from the application band using a hand probe pH meter. The constant distance was ensured by a plexiglass template (Figure 1). The pellets of lime applied in-furrow remained intact even after several months from their application and were still visible to the naked eye for both years (Figure 2). This indicates that the lime pellets have very little or no dissociation within the winter wheat growing season, and consequently will induce limited changes in soil pH. 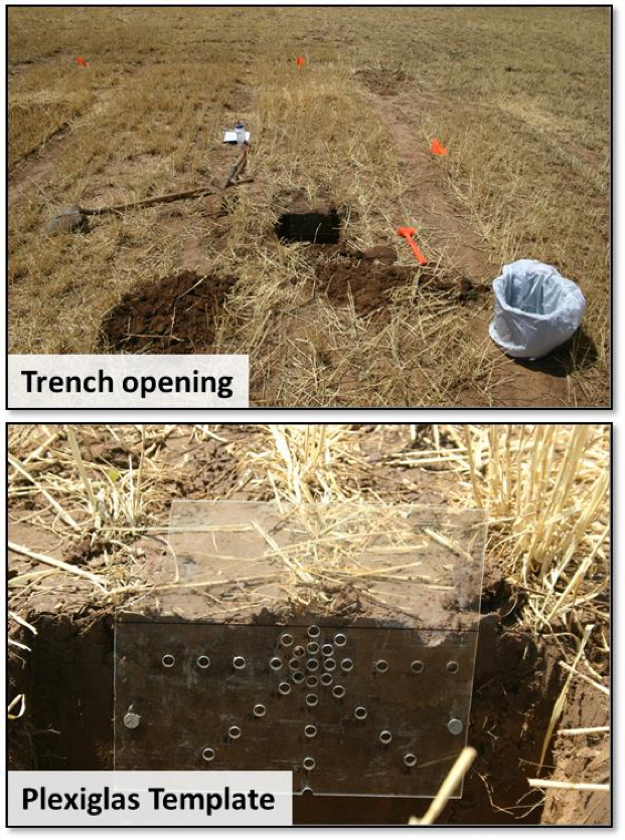 Figure 1. Upper photo illustrates the trench opening procedure adopted in field, perpendicular to wheat rows, with the objective to evaluate the pH distribution in the soil profile. Bottom photo shows a plexiglass template used to ensure all pH measurements were taken centered at the furrow and at constant distances from the original pelletized lime application placement. 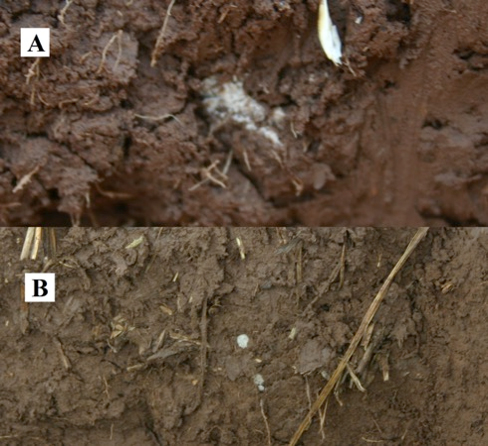 Figure 2. Trenches opened in (A) June 2011 and (B) June 2012 showing little or no diffusion of the pelletized lime across the soil profile. Pellets were visible and practically unmodified approximately 220 days after pelletized lime banding. 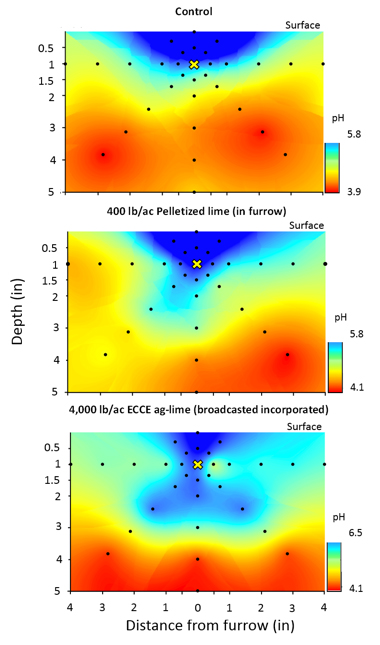 Figure 3. Distribution of pH measured following wheat harvest in June 2011 across the soil profile (depth vs. distance from furrow) as a function of acidity correction strategy at Waukomis, OK. Treatments shown are the control (upper panel), the 400 lbs/A/yr pelletized lime (middle panel), and the 4,000 lbs ECCE/A (bottom panel).

With such a limited soil area affected by banded pelletized lime, very little contribution could be expected from pelletized lime to wheat biomass (aboveground growth) or grain yield. Indeed, wheat normalized difference vegetative index (NDVI) measured early in the spring, which is a good indicator of crop biomass, was not statistically different in the plots treated with in-furrow pelletized lime at 200 lbs/A/yr or 400 lbs/A/yr, when compared to NDVI observed in the control plots, indicating no positive effect of in-furrow pelletized lime on wheat vegetative development (Figure 4). Although TSP did not increase soil pH, it provided readily-available P to the wheat crop and significantly increased biomass production, with similar or even greater NDVI than those measured in the plots treated with broadcast incorporated agricultural lime. The better stand establishment and tilling of the wheat crop as function of readily-available P or increased soil pH from the broadcast agricultural lime is also clear in Figure 5. Banded pelletized lime resulted in much poorer stand establishment and vegetative growth as compared to banded P fertilizer or broadcast agricultural lime. 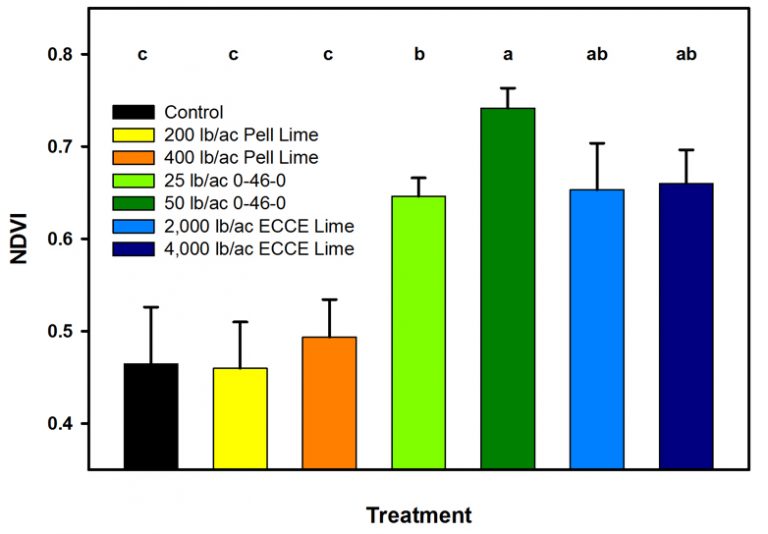 Despite the effect treatments had on wheat growth, no differences were observed in wheat grain yield (Table 2). The lack of wheat yield response to treatments may have been caused by a combined effect of weather conditions and low aluminum saturation levels (percent aluminum over total soil exchangeable cations). The negative effects of soil pH on crop growth and yield are increased with dry weather conditions, as a decreased root growth explores less soil volume. Likewise, a season marked by regular, consistent rainfall events can reduce the effects of low soil pH on crop grain yield. The 2009-10 and 2011-12 growing seasons were characterized by relatively high rainfall totals during the spring (March through May precipitation: 13.2 and 16.5 inches, respectively). This compares to the 30-year average of 10.5 inches, which allowed yields to range from 49 bu/A to 54 bu/A in 2009-10 and from 60 bu/A to 66 bu/A in 2011-12. Thus, the lack of response to lime in these growing seasons was most likely due to abundant spring rainfall. The 2010-11 growing season was characterized by a severe drought during the spring. Although this dry condition increased differences in vegetative development among treatments, a freeze on April 16, 2011 reduced wheat productivity in all treatments, and grain yields ranged from 19 bu/A to 24 bu/A in the 2010-11 growing season. Additionally, percent aluminum saturation was consistently below 12 percent, regardless of the liming treatment. Percent aluminum saturation below 12 percent might be too low to be detrimental to wheat grain yields.

This study shows that banding pelletized lime at 200 lbs/A/yr or 400 lbs/A/yr is not a suitable strategy to overcome low soil pH problems, as the change in soil pH will be restricted to a small region surrounding the pellet. In-furrow pelletized lime granules do not dissolve in the soil within the wheat growing season. Broadcast and incorporated agricultural lime was the most effective treatment in increasing soil pH. This study also confirmed that banded TSP fertilizer can be used to increase wheat biomass production in acid soils, although it did not increase soil pH. This indicates that banding P fertilizer is especially attractive in situations where the farm is being rented and long-term correction of soil pH is not an economical alternative to the producer. Results also show wheat forage yield is more sensitive to soil acidity than wheat grain yield. Increased vegetative growth associated with broadcast and incorporated agricultural lime or banded phosphate fertilizer used to offset the effects of low soil pH soils may not result in increased grain yields under conditions where aluminum saturation levels are lower than about 12 percent. This raises a red-flag for dual-purpose wheat producers in Oklahoma, who may be losing much more than wheat grain yield if they are part of the 24 percent of Oklahoma farms with soil pH lower than 5.5.

For more information on this study and soil pH

Thanks to Rodney and Karen Jones for donating the land, time and resources necessary to make this research project possible.

At the time of writing this report, 2021 Oklahoma wheat production is estimated to be approximately 108 million bushels, which is about 4% higher than 2020 production and 2% lower than 2019 production