Mechanical properties of wood play an important role when used for different design applications. Wood is widely used for structural purposes. This fact sheet summarizes some of the basic concepts related to mechanical characteristics of wood, including viscoelasticity, compression, shear, bending strength properties and how such characteristics should be taken into consideration for an efficient practical design.

In contrast to metals and plastics, wood is an orthotropic material, meaning its properties will be independent in three directions – longitudinal, tangential and radial, as illustrated in Figure 1. Another unique property of wood is its viscoelasticity, which can be described as having both plastic and elastic characteristics when exposed to a certain deformation.

A bookshelf example can be used to illustrate the viscoelasticity of wood: A number of books are put on a shelf and, in time, it will have a limited amount of sagging deformation. When all books are removed from the shelf, it will never return to its original flat condition. Thus, there will be a residual deformation left because of its viscoelasticity. Figure 2 illustrates the viscoelastic behavior of wood, as in the bookshelf example. 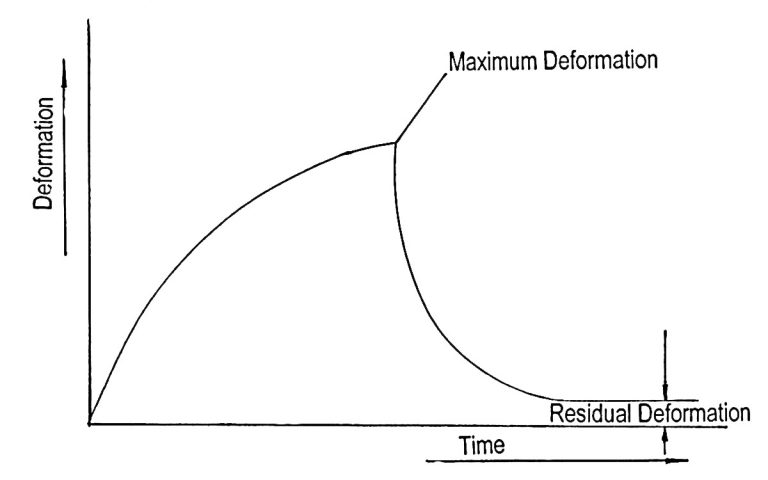 Compression of wood and wood-based materials plays an important role in almost any construction projects. If the compression strength or bending strength of a 2-inch by 4-inch beam is not known, deflection due to bearing a load may cause significant deformation, which could even lead to its failure during service life. Therefore, most softwood construction lumber is graded based on allowable load resistance, which can be determined from a stress test. However, strength properties of hardwood lumber are not that critical because a majority of it is used for furniture manufacturing and is not exposed to substantial loads.

Compression or shear strength of a wood beam or truss used extensively for construction can be calculated based on the following equation:

In general, stress is the load per unit area and is expressed in pound per square inch (psi), kilogram per square centimeter (kg/cm2) or any other units. Figures 3 and 4 show compression and shear stress developed by a perpendicularly applied load on small wood blocks.

Figure 4. Sheer stress of a sample.

In the case of bending a beam, we are dealing with modulus of elasticity (MOE) and modulus of rupture (MOR) to evaluate its load resistance. While MOE is a measure of the stiffness of a body, MOR is related to maximum strength that can be resisted by a member. Both are expressed as stress similar to most of the other mechanical properties of wood. The following two equations are used to calculate MOE and MOR of wood with a rectangular cross section:

I = moment of inertia, which is the inertia of a rigid body with respect to its rotation and, in the case of a rectangular cross section, is expressed as in4.

Both MOE and MOR values of different species can be obtained from various references for a particular design. Table 1 displays some of the mechanical properties, including MOE and MOR, of several species. Figure 5 also illustrates a typical beam bending with deflection as a result of a central load.

Table 1. Some of the mechanical properties of various species at 12 percent moisture content. (From Wood Handbook, 1999)

Figure 5. Bending of a wood beam.

Mp = moisture content at which property is changed   (Mp is assumed 25 percent for most species, based on USDA Forest Service, 1999).

Detailed information about mechanical properties of wood and wood products also can be found in the following literature: