Groundwater aquifers are important sources of water for agricultural, municipal and household use across the world, sustaining one-fourth of the human population (Ford and Williams, 1989). It is estimated that there are more than 390 million acre-feet of groundwater in Oklahoma, most of which is held in the state’s 22 major aquifers (see Extension Fact Sheet WREC-104, “Introduction to Groundwater Hydrology and Management.”). These aquifers supply nearly half of all water used in Oklahoma and more than 70 percent of water used for agricultural irrigation (Oklahoma Water Resources Board, 2014).

To sustainably manage groundwater resources, it is necessary to know an aquifer’s recharge rate, or the rate at which water is being returned to the aquifer. Understanding an aquifer’s recharge rate allows water managers to know whether more water is being returned to or lost from the aquifer, either by pumping or by natural discharge. Rates of groundwater loss often exceed the rate of recharge due to excessive pumping or drought, which causes water levels in aquifers to drop. This disparity between recharge rates and groundwater losses led to water level declines during 2001-2006, ranging from 0.6 to more than 21 feet in many major Oklahoma aquifers, as shown in Figure 1. 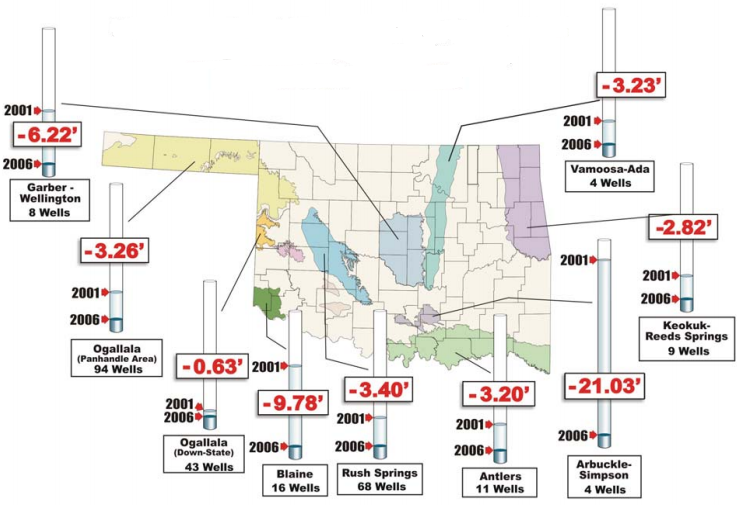 Many prior studies have estimated recharge rates for individual Oklahoma aquifers (Table 1). However, factors such as data availability, climate during the study period (i.e., wet vs. dry conditions) and the duration of the study (i.e., short vs. long-term) can impact study results and can make comparing recharge rates between studies difficult. In contrast to aquifer-specific studies, very few state-wide estimates of groundwater recharge have been made. The most recent state-wide recharge rates were published nearly 40 years ago (Pettyjohn et al., 1983) (Figure 4). Because of the importance of groundwater in the state, accurate and up-to-date recharge rates are essential for the sustainable management and longevity of groundwater resources.

Groundwater recharge is often limited by the amount of water that drains from a soil profile, and the drainage rate is strongly influenced by soil moisture conditions. Because drainage limits the amount of recharge an aquifer may receive, it is helpful to think of the drainage rate as a potential recharge rate, or as an upper limit on actual recharge. Assuming water flow in soil is gravity-driven, it is possible to estimate the amount of drainage from the soil profile using soil moisture data from monitoring stations and soil property data. The Oklahoma Mesonet has provided daily soil moisture data at three depths (2 inches, 10 inches and 24 inches) for more than 100 stations since 1996 (Figure 2). These data were used to estimate annual drainage at 78 locations from 1998-2014 (Figure 3).

Using soil moisture data to estimate drainage rates has three distinct advantages over previous methods: 1) it incorporates long-term meteorological and soil moisture data that have been collected since 1996, including the effects of several extreme climatic events, 2) results can be updated any time as long as the soil moisture monitoring system is intact and 3) in addition to site-specific estimates of drainage, the large number of point measurements available may be used to indicate the spatial distribution of recharge across the entire state of Oklahoma, as opposed to single-aquifer studies that have been done in the past.

Figure 2. Mesonet site name abbreviations and locations for sites where drainage estimates were made. Labels for three sites (Stillwater, Marena and Oklahoma City East) were excluded for clarity. Adapted from Wyatt et al. (2017).

Figure 3. Statewide mean annual soil moisture-based drainage rates for the years 1998-2014. Drainage rate labels for the Stillwater, Oklahoma City East, Porter, and Marena sites were excluded for clarity, but were 8.4, 3.2, 6.5 and 2.6 inches per year, respectively. 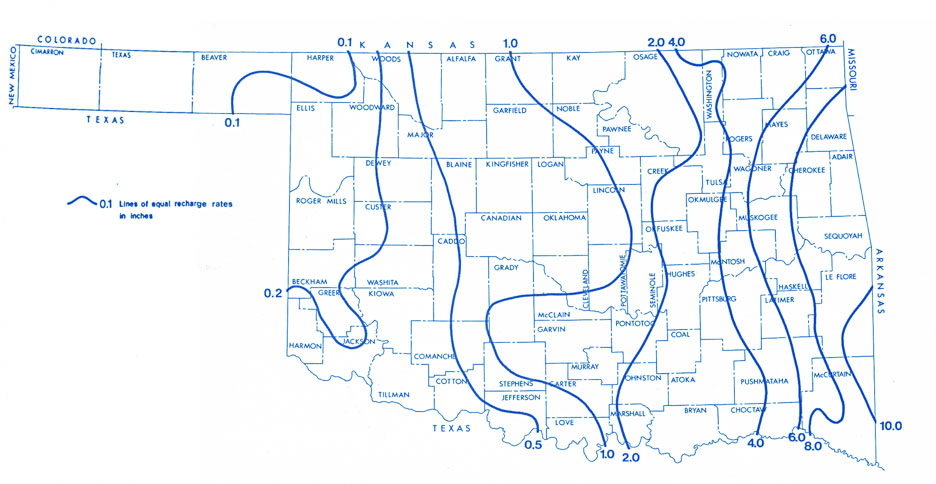 Long-term mean annual drainage (potential recharge) estimates found using soil moisture data from the Oklahoma Mesonet are shown in Figure 3. Soil moisture-based drainage rates generally followed the precipitation gradient of the state, as expected, decreasing from east to west. Mean drainage estimates for the period from 1998-2014 agreed well with prior recharge estimates, with drainage rates ranging from 0.2 inch per year at Boise City in the Oklahoma Panhandle to 10.5 inches per year at Bristow in northeast Oklahoma. This is similar to the range of recharge values found by prior studies in Oklahoma, with reported recharge rates ranging from 0.03 to 10.5 inches per
year. The median drainage rate for the study period was 2.64 inches per year, which is approximately 7.7 percent of the median state-wide rainfall of 34.3 inches per year for the same period. This means, on average, approximately 8 percent of rainfall falling in Oklahoma became drainage from 1998-2014.

Soil moisture-based drainage estimates can be made by applying a simple unit-gradient assumption to daily soil moisture data from long-term in situ monitoring stations. The primary weaknesses of this approach in the present study were: 1) the relatively shallow measurement depth used (i.e., 24 inches) and 2) the increased uncertainty in the drainage estimates for wetter sites. Despite these weaknesses, the results provide evidence that, in many cases, the drainage rates at 24 inches are estimated with reasonable accuracy and that these drainage rates are indicative of potential groundwater recharge rates. Spatial patterns of the estimated drainage rates tend to follow the state’s precipitation gradient, decreasing from east to west. Additionally, aquifer-scale drainage rates compared well with previous estimates of recharge in all available cases. The maps of mean annual drainage rates across the state of Oklahoma, yearly drainage and other maps related to soil moisture conditions in Oklahoma, are available online at http://soilmoisture.okstate.edu under the “Projects” tab.

The following major points are discussed in this Fact Sheet:

Morton, R. B. 1992. Simulation of ground-water flow in the Antlers aquifer in southeastern Oklahoma and northeastern Texas. US Department of the Interior, U.S. Geological Survey Water Resources Investigation.