Introduction to Groundwater Hydrology and Management

Most of the fresh water in the continental U.S. is groundwater, including approximately half of all water used in Oklahoma. According to the Oklahoma Water Resources Board (OWRB, 2014), Oklahoma contains more than 390 million acre-feet (AF) of groundwater. More than 80 percent of the total water used for crop irrigation is extracted from groundwater resources and this number could be above 90 percent in drier years. With such an important resource available to the state, the objective of this fact sheet is to review the fundamentals of groundwater flow and hydrology, and introduce key terms necessary for adequately understanding groundwater use and management. A key factor influencing groundwater retrieval and use is its value to the user. Investment in recovery, distribution and maintenance can range from minimal to relatively expensive. The economics of such investments will be elaborated upon in other fact sheets.

Aquifers are underground layers of permeable rock or unconsolidated material that contain water in the pore spaces. To be considered an aquifer, the layer must contain and transmit useable quantities to wells and/or springs. Oklahoma is underlain by 22 major groundwater aquifers (Figure 1). 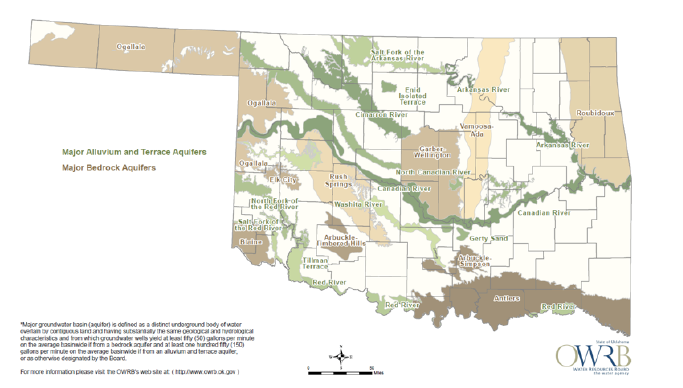 The exact depth at which the saturated zone occurs varies by location (spatially) and through time (temporally). The depth to the saturated zone can vary from zero at the soil surface to several hundred feet. In some areas, it is difficult to locate the saturated zone because of rock formations or the extreme depths at which groundwater is located. Typically, there is a region above the saturated zone that contains some water in smaller pores, but larger pore spaces are not filled with water. The water in this zone is typically not available for pumping because it generally is held more tightly by the soil (under tension) and the practical yield is very low. However, water can move through this unsaturated zone by gravity drainage and become part of the saturated zone in a process called recharge. 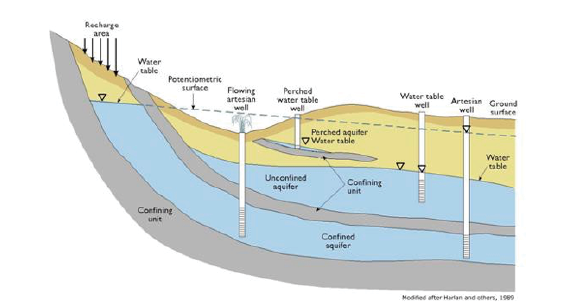 In a confined aquifer, water is held under pressure from recharge areas that may be long distances away. Water levels can be checked using an observation well that penetrates and is screened in a confined aquifer. The water level in an observation well will rise because the water is held under pressure. The water level in this observation well is referred to as the piezometric surface. If the piezometric surface rises to a level above the ground surface, then a flowing artesian well is created, which discharges water to the surface without the need for a groundwater pump (Figure 2).

Many unconfined aquifers are alluvium or terrace aquifers, meaning they were formed in alluvial deposits and interact closely with adjacent streams and rivers. Examples in Oklahoma include alluvium or terrace aquifers adjacent to the Cimarron, North Canadian and Arkansas rivers. A stream may be classified as “gaining” if water from the alluvial aquifer is discharging to the stream (Figure 3), “losing” if stream water is recharging the alluvial groundwater or “disconnected” when the groundwater table has dropped below the streambed. Groundwater pumping wells, especially those that are screened in alluvial aquifers and positioned near streams, not only extract water from the groundwater, but also deplete adjacent stream flow in what is called stream depletion (Fox et al., 2011; Fox, 2015). 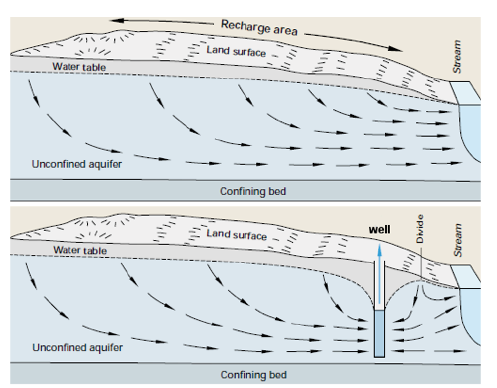 Figure 3. Depiction of flow between an aquifer and stream and the cone of depression formed by a groundwater pumping well.

A perched aquifer is an unconfined aquifer of limited aerial extent that retains water against gravity because of an underlying restrictive layer, such as clay. Perched aquifers may be seasonal or permanent.

Water movement in all types of aquifers is characterized through the hydraulic conductivity, which depends on the size, shape and connectivity of pores in the aquifer. Groundwater flow velocities are typically small (less than 1 foot per day), except near wells and springs, and almost always much smaller than stream velocities. However, groundwater flow in locations that contain limestone caverns or rock fractures may be very fast.

Groundwater pumping wells can provide a range of available water flow rates, called the well yield. For example, many of the formations in western Oklahoma in the Ogallala or Rush Springs aquifers can provide as much as 250 to 1,000 gallons per minute. Average well yields in central Oklahoma aquifers are typically around 200 gallons per minute, and in eastern Oklahoma approximately 100 gallons per minute. Well yields can vary substantially even within an aquifer as a function of the aquifer’s saturated thickness, hydraulic conductivity, the extent of the well screen throughout the aquifer thickness and the efficiency of the pump.

As a well removes water from the aquifer, a drawdown or cone of depression is formed (Figure 3), where drawdown is the difference between the initial height of the piezometric surface in a confined aquifer or water table in an unconfined aquifer and the height of the piezometric surface or water table at a certain location around the well (Winter et al., 1998). Pumping a groundwater well may influence nearby wells in what is called “pumping influence.” In Oklahoma, groundwater permits only consider pumping influence in basins, where the maximum annual yield (MAY) has been determined. The pumping influence depends on numerous factors, such as the distance between the pumping wells, the well characteristics (depth of the well and screened section), aquifer properties and pumping rates (Figure 3). Equations are available for determining influence.

Groundwater becomes surface water when it emerges as a spring or seep or when it directly enters a stream, pond or lake. Groundwater discharge to streams, springs and seeps generally forms the baseflow for many streams between precipitation events. The pathway taken by water, as it infiltrates and percolates to recharge the saturated zone and emerge as baseflow to become surface water, has a major impact on the quality of the water. The interchange between groundwater, water stored in the soil profile and surface water points to the need to consider the integration of the hydrologic system (Winter et al., 1998). 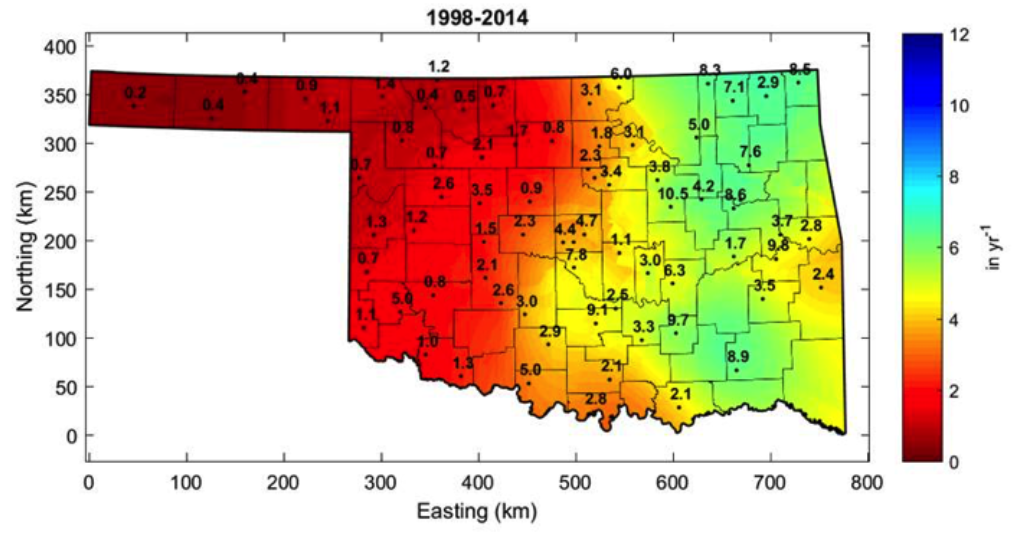 Figure 4. Statewide mean annual soil moisture-based drainage rates for the years 1998-2014 in inches per year. Drainage rate labels for the Stillwater, Oklahoma City East, Porter, and Marena sites were excluded for clarity, but were 8.4, 3.2, 6.5, and 2.6 in yr-1, respectively.

When water tables exhibit long-term declines, this is commonly referred to as “mining the resource.” This is not a trivial point with respect to the economics of recovery. When water tables are relatively stable, normal maintenance and upgrading of the infrastructure is the primary expense to consider (assuming no quality degradation). However, when water tables decline steadily over time, managers must make new decisions on the efficiency and net benefits of drilling deeper and investing in more expensive infrastructure. The decision to drill deeper or add additional wells because ‘that’s where the water is’ may be a fast path to economic losses. Also, basing decisions on outlays that may be very expensive up front in return for anticipated gain at a later time requires careful consideration of the associated markets. For example, a decision to drill a new well or dig deeper to provide water for agriculture or the oil and gas industry needs to consider the likely future downturns in those markets.

In Oklahoma, groundwater rights are private property rights: landowners or lessees can obtain a permit for uses other than domestic use (which does not require a permit), to use groundwater based on the number of acres that overly a groundwater basin, typically and by default 2.0 AF per acre of land each year (Fox, 2015). Sometimes this amount is adjusted to an equal proportionate share (EPS) when a study has indicated a specific water volume for a minimum 20-year basin life. For example, in 2014, the EPS was reduced by OWRB from 2.0 to 0.2 AF per acre per year in the Arbuckle-Simpson aquifer. More than 4.7 million acre-feet of groundwater were used in Oklahoma through permits in 2014, and about 2 percent of that water was used by the oil and gas activity. Most of that oil and natural gas water use occurred in the central and western parts of Oklahoma (Peek et al., 2016). In general, groundwater pumping is not metered in Oklahoma. The groundwater policy in Oklahoma authorizes the OWRB to require meters be placed on pumping wells to monitor extraction rates, but only in cases where a majority of the landowners request the meter.

Groundwater is currently and will continue to be a critical resource for the state of Oklahoma. It is important research continues to assess the current and future status of our groundwater resources. Appropriate policy decisions regarding groundwater use and management can only occur when supported by sound, scientific information regarding our groundwater supplies.