Blackberries are among the easiest of all fruits to grow. Few fruits produce more dependably than blackberries. Properly maintained, irrigated plantings of good varieties may produce crops for 10 years or more. Blackberry fruit has a range of distinctive flavors that vary from sweet to tart. The fruit may be sold “U-pick”, fresh market, or frozen. It may also be sold to processors for freezing or canning. Well-established plants can produce up to 20,000 pounds per acre. All these features make blackberries an attractive crop for commercial fruit and vegetable growers.

Before deciding to grow blackberries, one should consider several points:

These points are discussed below.

Cultivated blackberries do best on sandy loam soils with organic matter. However, they will tolerate a wider range of soil types than most other fruits. Good soil drainage and 2.5-3 feet of unrestricted rooting area are necessary for best plant performance. A site with a slight north-facing slope is preferred. This helps prevent spring frost injury and protects plants from southwest winds in summer. Additional wind protection may be necessary, because succulent first year canes exposed to strong winds may be blown over and broken from the root system.

Blackberries have an erect, semi-erect, or a trailing growth habit. Erect blackberries are recommended for commercial production because they require less labor than trellised brambles (blackberries, raspberries, etc.). Several good varieties of erect blackberries have been released by scientists in Arkansas. These varieties should be well adapted to Oklahoma conditions. Ripening dates may vary based on location. The varieties include:

Apache: ‘Apache’ is the latest ripening thornless Arkansas variety (~June 25). It is high yielding and has large berry size. It has excellent postharvest potential and is good for shipping. Flavor for ‘Apache’ is considered good (sweet), between ‘Navaho’ and ‘Arapaho.’ The chilling requirement for ‘Apache’ is about 800 hours, one of the higher totals among these varieties along with ‘Navaho’

Arapaho – ‘Arapaho’ is the earliest ripening thornless variety (~June 7). It yields lower than ‘Navaho,’ ‘Apache,’ or ‘Ouachita.’ Fruit storage and handling is good. ‘Arapaho’ has a sweet flavor. The chilling requirement for ‘Arapaho’ is around 500 hours.

Chickasaw  – ‘Chickasaw’ ripens slightly later than several of the other thorny Arkansas varieties, about 2 or 3 days after ‘Shawnee’ (-June 11). It produces high yields, among the best of the Arkansas varieties, and has a very large berry. Flavor sweetness is near to that of ‘Shawnee’ and ‘Kiowa.’ The postharvest potential is not as good as the thornless varieties, but has been shipped in the United States and Mexico. It also has a moderate chilling requirement of 500-700 hours, which is equal to or slightly more than ‘Shawnee.’

Kiowa – ‘Kiowa’ ripens with ‘Chickasaw’ and about four days after ‘Shawnee’ (~June 12). ‘Kiowa’ is thorny, has large fruit size, up to 50% larger than ‘Shawnee’. It also has improved postharvest handling capability and quality over ‘Shawnee.’ The ripening season can be quite long for ‘Kiowa’ (6 weeks or more). It has a lower chilling requirement (200 hours), which is lower than ‘Shawnee’ and ‘Chickasaw’.

Natchez – ‘Natchez’ is an early thornless, semi-erect blackberry that ripens around the same time as ‘Arapaho’ (~June 3).  It has large berries (8 to 9 grams), comparable to ‘Apache.’ Yields are comparable to ‘Ouachita’ and ‘Apache,’ and twice that of ‘Arapaho.’  Flavor is good, similar to ‘Arapaho.’ Fruit stores well, so shipping is a possibility.  Chilling requirement is likely around 500 hours.

Navaho – an erect, thornless blackberry. The fruit are large and firm, and are less tart than other thornless varieties. They ripen late in the season (~June 20). Only about 65% of root cuttings produce plants, so they are more expensive than most thorned varieties. This variety is moderately resistant to anthracnose, and is known hardy to -14 F in Arkansas.

Ouachita–‘Ouachita’ ripens between ‘Arapaho’ and ‘Navaho’ and produces very high yields, among the highest for any Arkansas thornless variety (~June 12). Berry size is larger than ‘Arapaho’ and ‘Navaho,’ but not as large as ‘Apache.’ Postharvest handling is excellent, comparable to ‘Navaho.’ ‘Ouachita’ also has very erect canes. It may have a lower chilling requirement than other Arkansas thornless cultivars, possibly 200-300 hours.

Prime-Jan™ – It is thorny. The primocane crop of  ‘Prime-JanTM begins to ripen in mid-July. Berry size and yield have been problematic in high heat areas, but in more moderate climates such as Oregon, size and yield have been exceptional. In Oregon, yields up to 15,000 lb/ac have been achieved and berry size up to 15 g on primocanes was measured in Fayetteville, Ark. Floricane berry size is about 5 g. ‘Prime-Jan’TM also has a low floricane chilling requirement, likely 100-300 hours, among the lowest for the Arkansas thorny varieties. Not currently recommended for commercial production in Oklahoma.

Shawnee – an erect, thorned blackberry. The fruit are large and of medium firmness, ripening with other thorny varieties (~June 8). The seeds are medium in size. This variety has more years of good yields than many varieties. Propagation by root cuttings is readily successful. This variety is moderately tolerant to anthracnose.

A soil test is necessary to determine the need for fertilizer and lime (see Fact Sheet PSS-2207). The soil should be deeply cultivated, and organic matter such as compost should be incorporated into the rows. If the soil needs additional drainage, the row areas should be built up into raised beds. The beds should be from 6 to 10 inches high and 2 to 3 feet wide. Optimal pH for blackberries is around 6.5.

Please note that all University of Arkansas-developed varieties mentioned here are patented, and may not be legally propagated for sale or for personal use. Non-patented blackberries may be propagated freely. Ask your plant supplier if you are in doubt.

Erect Blackberries – Most nurseries produce plants from root cuttings. The root cuttings, 2 to 3 inches long and 1/8 inch diameter or larger (about the size of a pencil), are planted in the early spring (March). The rows of cuttings should be from ½-1 inch deep, with cuttings 3 to 6 inches apart in the row. Plants will be ready for transplanting into the permanent row during the following winter.

Another method for increasing erect blackberries is from naturally occurring sucker plants. One year old suckers are dug from established rows and set into new permanent rows (Figure 1). More sucker plants can be produced by tilling near existing plants, which breaks the roots and results in a generation of new plants from these “cuttings”.

Planting may be done at any time during the dormant season, but most planting is done during February or early March. Space plants 3 to 4 feet apart in rows that are 6 to 9 feet apart. Plants should be set at the same depth they grew in the nursery row. Unless rain is likely, water the newly set plants.  Actively growing plants should be planted only after the chance of frost has passed. 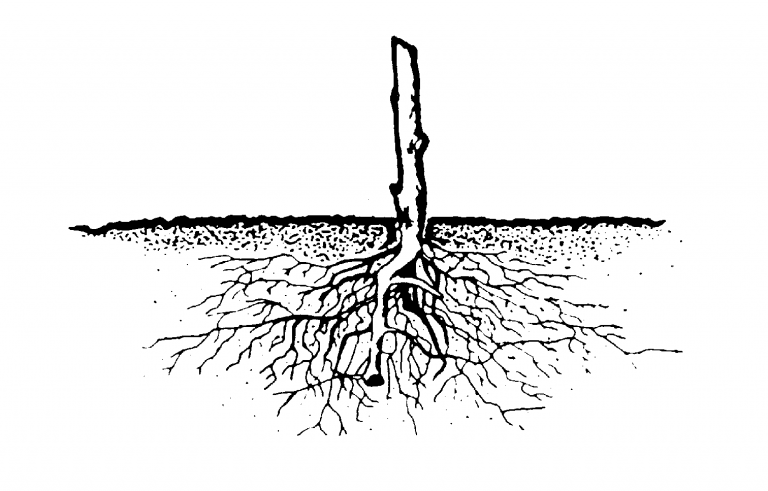 Trailing Blackberries – usually produce suckers or develop from cuttings. An easy, successful method of propagation is by means of tip layers. To tip layer blackberries, place the tip end of the cane into the soil about 2 inches deep and cover it with soil. This should be done in September or October. Roots will develop during the late fall and winter. Dig the rooted tips during February or early March. Cut the tips from the original canes, leaving a 3 to 4 inch section of the cane attached to it. Once established, one plant may produce from 10 to 20 tip layered plants each year without seriously affecting its fruit production. Space the new plants the same as for erect blackberries.

The crowns and root systems of blackberries live for many years. New canes arise from the crown each year and live for only two years. In the first growing season after planting, erect blackberry plants often produce prostrate to semi-erect canes. Erect canes will be produced in subsequent years. During the first year, the canes grow to their full height (“primocane”). The second season, these canes bear fruit and die (“floricane”). Primocane-fruiting varieties have been developed, but are not currently recommended for commercial production in Oklahoma. Unlike most blackberries, these plants will flower and fruit on first year growth.