“HYDROPONICS” is the growing of plants in a liquid nutrient solution with or without the use of artificial media. Commonly used mediums include expanded clay, coir, perlite, vermiculite, brick shards, polystyrene packing peanuts and wood fiber.
Hydroponics has been recognized as a viable method of producing vegetables (tomatoes, lettuce, cucumbers and peppers) as well as ornamental crops such as herbs, roses, freesia and foliage plants. Due to the ban on methyl bromide in soil culture, the demand for hydroponically grown produce has rapidly increased in the last few years.

The word hydroponics comes from two Greek words ‘hydro’ meaning water and ‘ponos’ meaning labor. This word was first used in 1929 by Dr. Gericke, a California professor who began to develop what previously had been a laboratory technique into a commercial means of growing plants. The U.S. Army used hydroponic culture to grow fresh food for troops stationed on infertile Pacific islands during World War II. By the 1950s, there were viable commercial farms in America, Europe, Africa and Asia.

Hydroponic systems can either be liquid or aggregate. Liquid systems have no supporting medium for the plant roots; whereas, aggregate systems have a solid medium of support. Hydroponic systems are further categorized as open (once the nutrient solution is delivered to the plant roots, it is not reused) or closed (surplus solution is recovered, replenished, and recycled).

They are closed systems.

These system are further categorized into:

1. Passive systems use a wick and growing media with very high capillary action. This allows water to be drawn to the plant roots. The Wick System is by far the simplest type of hydroponic system (Figure 1.) 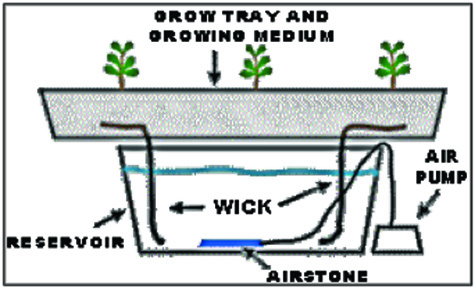 2. Active systems work by actively passing a nutrient solution over your plants roots. Examples include: 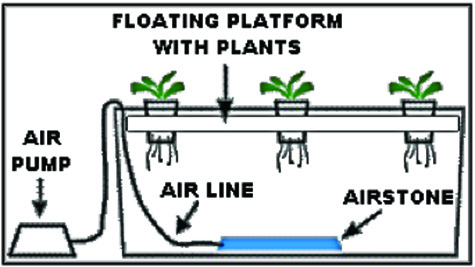 The Ebb and Flow System works by temporarily flooding the grow tray with nutrient solution and then draining the solution back into the reservoir. This action is normally done with a submerged pump that is connected to a timer. The timer is set to come on several times a day, depending on the size and type of plants, temperature, humidity and the type of growing medium used (Figure 3). 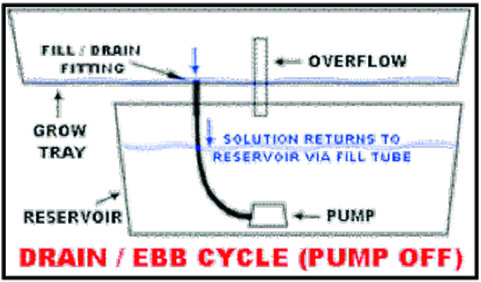 Figure 3. The Ebb and Flow System.

Drip Systems are probably the most widely used type of hydroponic system in the world. A timer controls a submersed pump. The timer turns the pump on and nutrient solution is dripped onto the base of each plant by a small drip line (Figure 4). 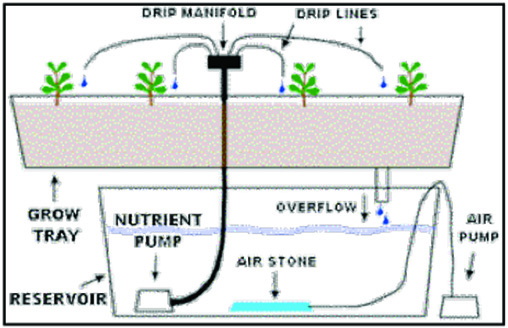 NFT Systems have a constant flow of nutrient solution, so no timer is required for the submersible pump (Figure 5). 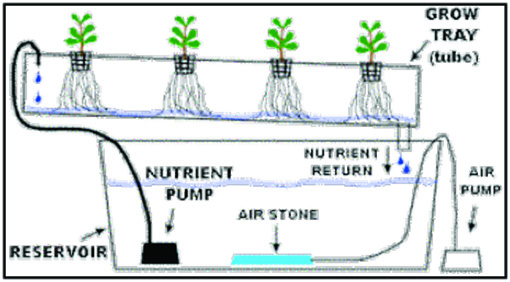 The Aeroponic System is probably the most high-tech type of hydroponic gardening. A timer controls the nutrient pump much like other types of hydroponic systems, except the aeroponic system needs a short cycle timer that runs the pump for a few seconds every couple of minutes (Figure 6). 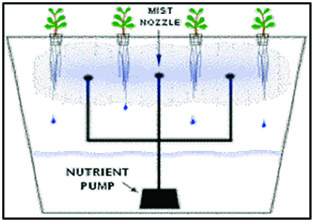 The major disadvantage of a closed system is the difficulty of nutrient management. Four main techniques are commonly utilized.

Water addition, pH and electrical conductivity (EC) control are all automatic. The pH is a measure of the acidity of the substrate and controls the availability of mineral nutrients; whereas, the EC gives an estimate of the nutrient content.
The recommended pH for hydroponic culture is between 5.0 and 6.0 because overall availability of nutrients is optimized at a slightly acidic pH, and the EC level should be 1.5 to 3 dS m-1

The water makeup of the holding tank is automatic, usually by float valve, i.e. the tank level is held steady. Here both water and nutrients are being taken, but only water is being replaced. Therefore, the EC will fall until the tank solution is brought up to strength by nutrient addition. The EC is periodically checked and adjusted to the required value by adding nutrient to the tank by hand. The pH is adjusted if necessary by adding acid (dilute sulfuric acid) to lower the pH or an alkali (dilute sodium hydroxide (NaOH) solution) to raise the pH.

The holding tank is partly or completely run down then refilled as a batch by adding water and/or nutrient. The important aspect of this technique is that the effects of the addition are checked.

The holding tank is partly or completely run down then refilled using a standard strength nutrient solution. However, the resultant EC in the system is not checked or adjusted. This technique can lead to disaster.

Commercial hydroponic growers need a more accurate control of the components in a nutrient solution to achieve commercial success. Numerous ‘recipes’ for hydroponic solutions are available. Many use different combinations of chemicals to reach similar total final compositions (Table 1).

There is no physiological difference between plants grown hydroponically and those grown in soil. In soil, both the organic and inorganic components must be decomposed into inorganic elements before they are available to the plant. These elements adhere to the soil particles and are exchanged into the soil solution where they are absorbed by plants. In hydroponics, the plant roots are moistened with a nutrient solution containing the elements. The subsequent processes of mineral uptake by the plant are the same (Figure 7). 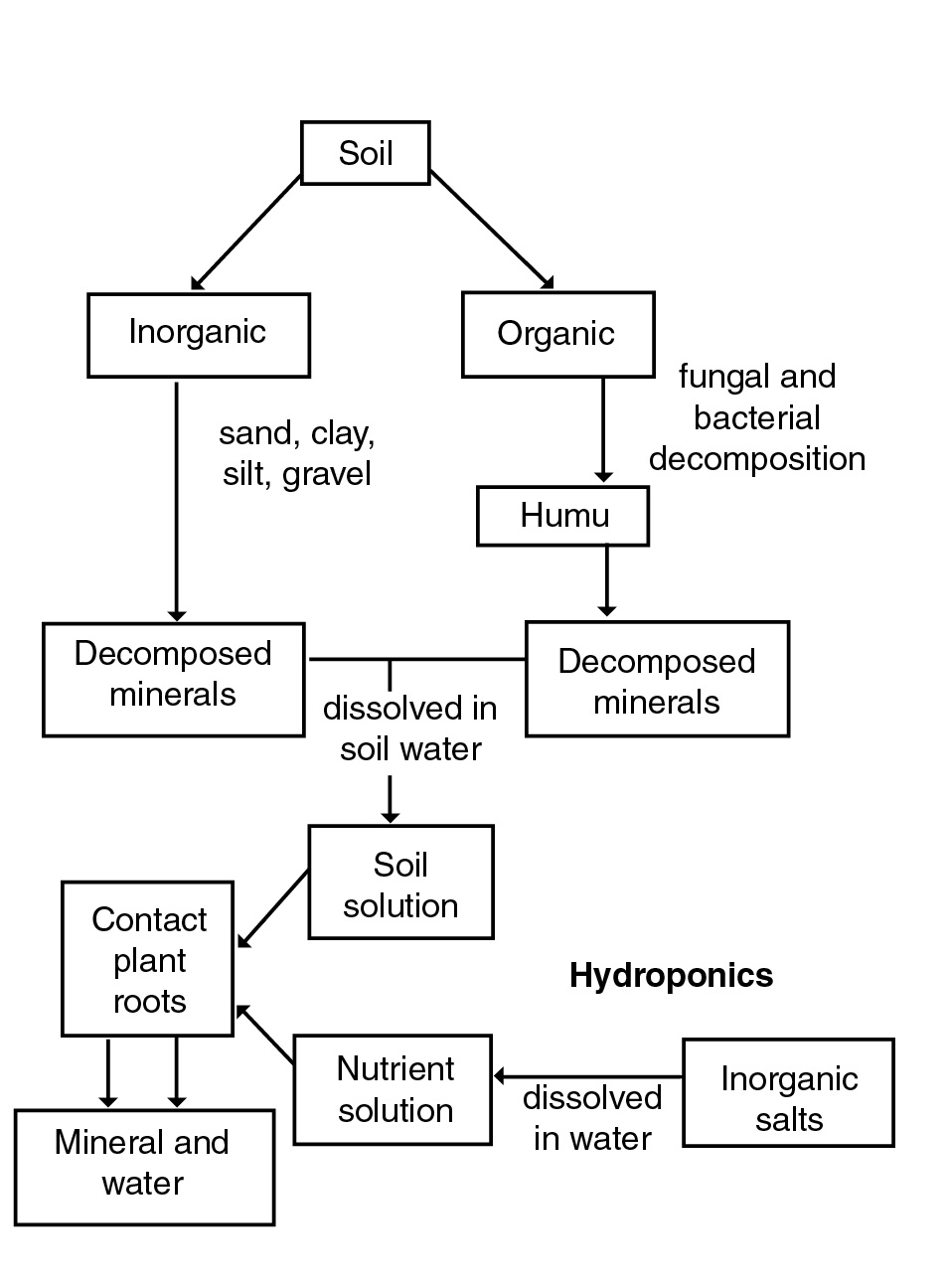 Figure 7. Origin of essential elements in soil and hydroponics.

There is no conclusive evidence that produce grown hydroponically are more nutritious or healthier than produce grown by any other method, although some small studies indicate that it may be possible. Many countries, such as Holland, do not differentiate whether the produce has been grown by hydroponics or by any other methods; they just concentrate on the quality of the produce. Produce quality is more likely to remain consistent in hydroponic systems, as plants are often less stressed than in other systems.

Hydroponics in the Home Garden

For the hobbyist, hydroponics is a highly technical specialized form of agriculture that has an ever expanding application to everyday use. At the same time, home hydroponic gardens have become so simple that people without a green thumb can be successful in growing flowers and vegetables in their homes. Many of the advantages of commercial hydroponics also apply to the home and hobby gardeners. In many industries, small systems are developed, then expanded for large scale use. Conversely, in hydroponics, large scale commercial production is becoming more common, while it is more of a challenge to make smaller systems economically feasible.

Hydroponic systems are only one of the options available when you are considering whether to grow a crop. Planning for a commercial business should, therefore, follow the normal sequence for considering any horticultural enterprise. Don’t overlook soil growing. You need a worthwhile reason to use a hydroponic system instead of soil.

If you do choose to go with hydroponics, you should evaluate the advantages and disadvantages of each type of production system for your crop of interest. For short term crops such as lettuce, the common choice is recirculating NFT or flood and drain gravel channels. For longer term crops or those very vulnerable to root disease, the common choice is nonrecirculating, media-based systems.

During recent years, there have been an increasing number of companies offering a range of turn-key packages. They sell a total package of protected structure, hydroponic and support systems, and often include consulting and marketing agreements.

Hydroponics may be used in underdeveloped countries for food production in limited space. It is even feasible to grow hydroponically in areas of poor soil conditions such as deserts. The desert sand serves as a good growing medium and seawater can be used to mix nutrient solution once the salts have been removed. The popularity of hydroponics has increased dramatically in a short period of time leading to an increase in experimentation and research in the area of indoor and outdoor hydroponic gardening.

The pruning processes for the common greenhouse hydroponics crop production.

A guide to optimal water alkalinity, pH levels for certain plants in hydroponics and the difference between soil and soilless culture.

An explanation of the care, elements, design, complexities and maintenance of a water garden.

A low intensity approach to creating a water garden and debunking misconceptions to create a thriving addition to an aquatic ecosystem.