All anaerobic digesters perform the same basic function.  They hold manure in the absence of oxygen and maintain the proper conditions for methane forming microorganisms (methanogens) to grow.  There are a wide variety of anaerobic digesters, each performing this basic function in a subtly different way.  Eight of the most common digesters are described in this document. Construction and material handling techniques can vary greatly within the main categories.   For clarity, digesters are divided into three categories:

Covered lagoon:  This system takes advantage of the low maintenance requirement of a lagoon while capturing biogas under an impermeable cover (Figure 1). The first cell of a two-cell lagoon is covered, and the second cell is uncovered (Figure 2).  Both cells are needed for the system to operate properly.  A lagoon provides storage, as well as treatment. The liquid level of the second cell must rise and fall to create storage. The level of the first cell remains constant to promote efficient manure breakdown.   If lagoon effluent is recycled to remove manure from buildings, HRT of the covered cell is usually 30 to 60 days.  Sludge is stored in lagoons up to 20 years, so SRT of a covered lagoon is very long.  Storing sludge in the first cell also means much of the fertilizer nutrients, particularly phosphorus, remain trapped in the covered lagoon for a long time. 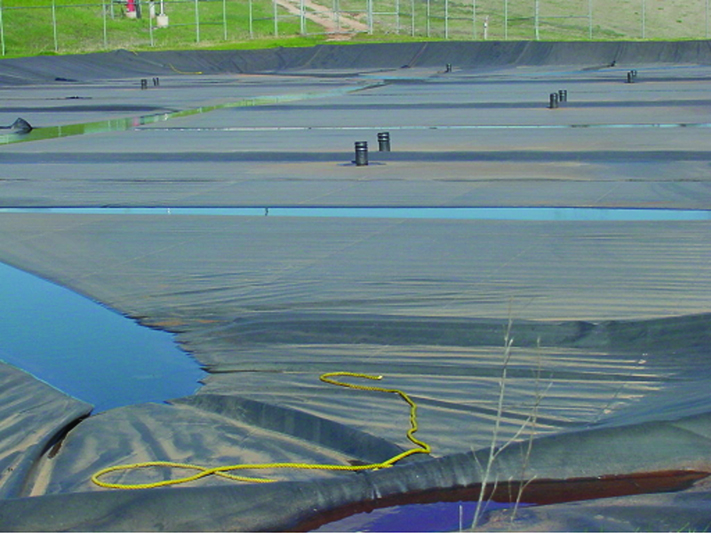 Complete Mix Digester:  A complete mix digester (Figure 3) is basically a tank in which manure is heated and mixed with an active mass of microorganisms (Figure 4).  Incoming liquid displaces volume in the digester, and an equal amount of liquid flows out.  Methanogens flow out of the digester with the displaced liquid.  Biogas production is maintained by adjusting volume so that liquids remain in the digester for 20 days to 30 days.  Retention times can be shorter  for thermophilic systems.  The digester can be continuously mixed or intermittently mixed.  Intermittent mixing means the tank is stirred during feeding and only occasionally between feedings.  Sometimes digestion takes place in more than one tank. For instance, acid formers break down manure in one tank, and methanogens convert organic acids to biogas in a second tank. Complete mix digesters work best when manure contains 3 percent to 6 percent solids. Digester size can be an issue at lower solids concentrations. Lower solids mean greater volume, which means you need a larger digester to retain the microbes in the digester for 20 days to 30 days. 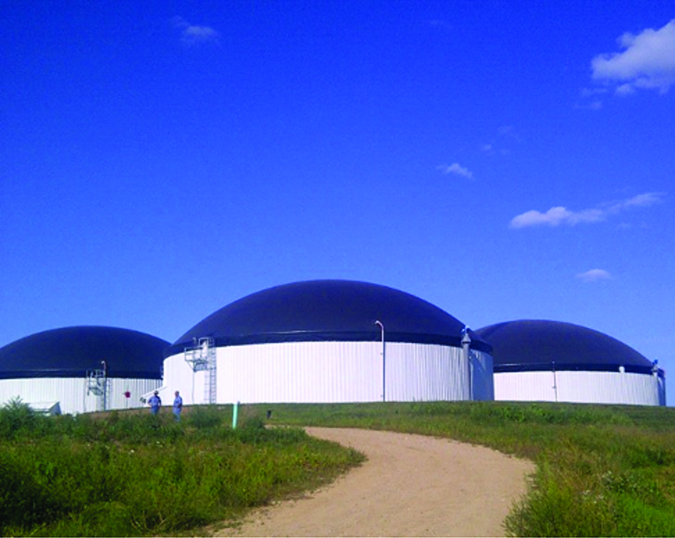 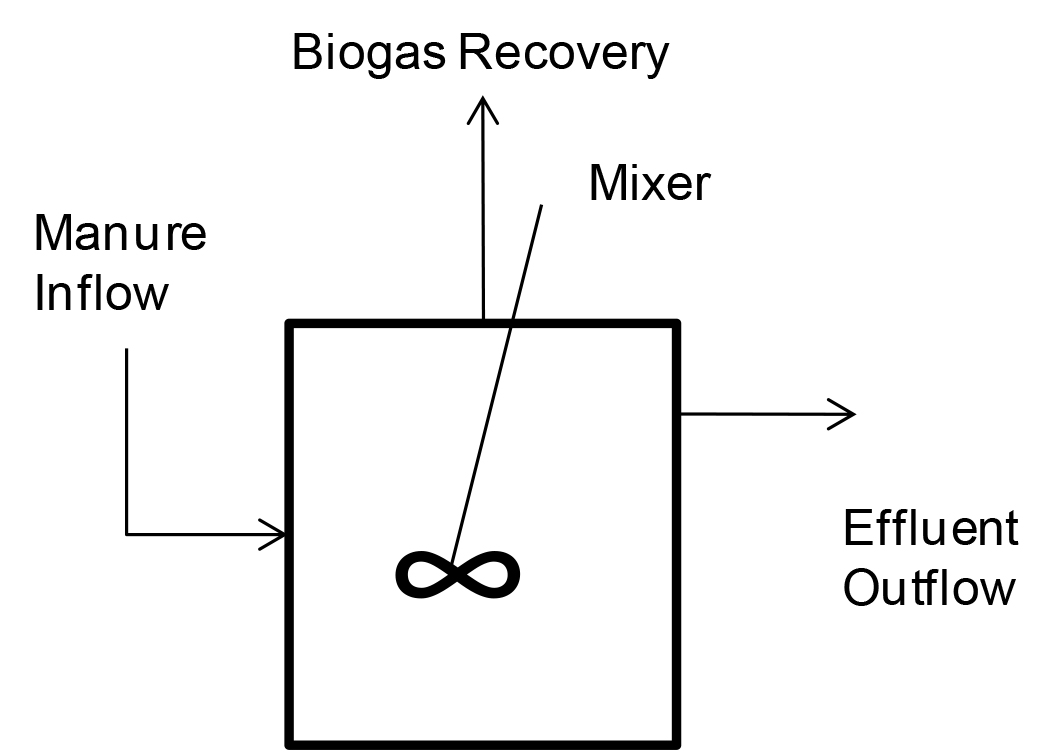 Plug Flow Digester: The idea behind a plug flow digester (Figure 5) is the same as a complete mix digester – manure flowing into the digester displaces digester volume, and an equal amount of material flows out.  However, the contents of a plug flow digester are thick enough to keep particles from settling.  Manure moves through the digester as a plug, hence the name “plug flow.”  Plug flow digesters do not require mechanical mixing. Total solids content of manure should be at least 15 percent, and some operators recommend feeding manure with solids as high as 20 percent.  This means you may need to add extra material to manure to use a plug flow digester.  This is not always a bad thing if you consider the added material may also be biodegradable.  More degradable material means more biogas.  Plug flow digesters are usually five times longer than they are wide.  Recommended retention time is 15 days to 20 days. 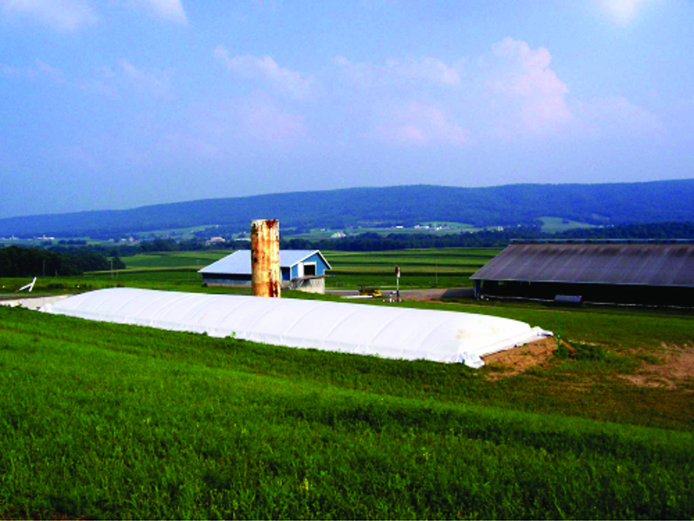 Mixed Plug Flow Digester: This is a patented variation on a plug flow digester in which manure flows down a hairpin raceway (Figure 6).  The contents are heated along the central divider so that the manure mixes in a corkscrew pattern.

Fixed Film Digester:  In this digester, methane forming microorganisms grow on supporting media such as wood chips or small plastic rings filling a digestion column (Figures 8 and 9).  These digesters are also called Attached Growth Digesters or Anaerobic Filters.  The slimy growth coating the media is called a biofilm.  Hydraulic retention times of fixed film reactors can be shorter than five days, making for relatively small digesters. Usually, effluent is recycled to maintain a constant upward flow.  One drawback to fixed film digesters is that manure solids can plug the voids between the supporting media.  A solid separator is needed to remove particles from the manure before feeding it to the digester.   Some potential biogas is lost due to removing manure solids. 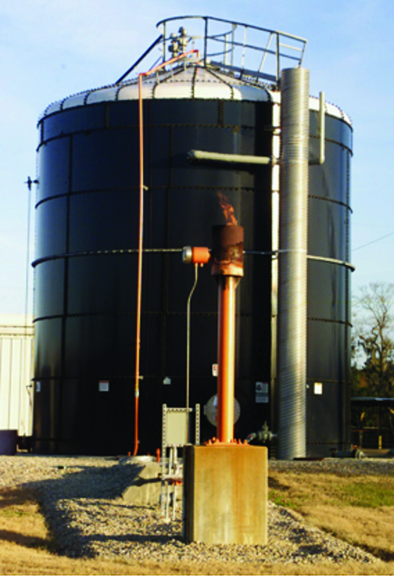 Suspended Media Digesters: In these digesters, microbes are suspended in a constant upward flow of liquid.  Flow is adjusted to allow smaller particles to wash out, while allowing larger ones to remain in the digester.  Microorganisms form biofilms around the larger particles, and methanogens stay in the digester.   Effluent is sometimes recycled to provide steady upward flow.  Some designs incorporate artificial supporting media, such as sand, for microbes to form a biofilm; these are called Fluidized Bed Digesters.  Suspended media digesters that rely on manure particles to provide attachment surfaces come in many variations. Two common types of suspended media digesters are the Upflow Anaerobic Sludge Blanket Digester or UASB Digester (Figure 10) and the Induced Blanket Reactor or IBR Digester (Figure 11).   UASB digesters work best with low solids influent.  IBR digesters require high solids manure to function properly.

Sequencing Batch Reactor:  An Anaerobic Sequencing Batch Reactor or ASBR (Figure 12) is a variation on an intermittently mixed digester.  Methanogens are kept in the digester by settling solids and decanting liquid. An ASBR operates in a cycle of four phases (Figure 13).  The digester is fed during the fill phase, manure and microbes are mixed during the react phase, solids are settled during the settle phase, and effluent is drawn off during the decant phase. The cycle is repeated up to four times a day for nearly constant gas production.  Hydraulic retention times can be as short as five days.  These digesters work well with very dilute manures, and if filled with active microbes during start-up, can even produce biogas with completely soluble organic liquids.  Sludge must be removed from the ASBR digester periodically.  Concentrated nutrients are harvested during sludge removal. 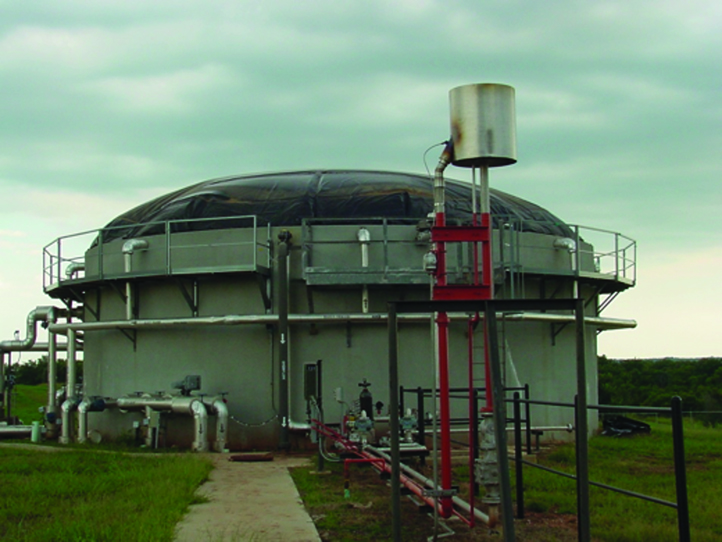 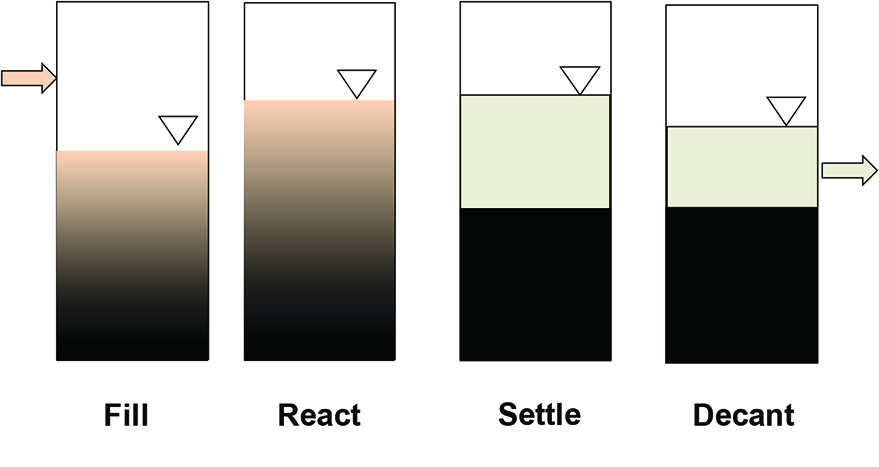