Traditionally, anaerobic digestion has been limited to liquid, slurry and semi-solid materials.  Recent engineering advances have opened the door for conversion of dry, stackable materials such as municipal solid waste, food waste and yard waste to biogas. These new systems are called solid state digesters.

Fermentation takes place as nutrient rich, neutral pH effluent trickles through stacked solids.  Liquid is not allowed to accumulate during fermentation, so solid state anaerobic digestion is sometimes called dry fermentation. But, this is only half of the process.  Biogas is formed from the low pH, high VFA liquid leached from the stack in wet methanogenesis.  Fermentation and methanogenesis can take place in the same reactor, or they may occur in separate reactors.  Removing leachate from the fermenting stack is important.  If acid accumulates during dry fermentation, the stack will “pickle.”  The result is silage.

These reactors are essentially boxes with false bottoms (Figure 2).  Dry fermentation takes place in material stacked on top of a perforated floor.  Leachate passes through the pile and is collected below the floor.   The bin shown in Figure 2 is a single phase reactor, because leachate undergoes methanogenesis as it is collected in the bottom of the bin.  In a two phase system, leachate would be pumped to a separate reactor for methanogenesis.  In either system, effluent from methanogenesis is sprinkled on top of the stacked organic matter.

Bin reactors are usually very large; therefore, they are sometimes called Bay Reactors. Bay reactors are large enough for trucks and loaders to drive into and stack material inside the box. They are sealed with large air-tight doors (Figure 3). Once the stacked material has been thoroughly fermented, it is either removed as is or composted in place by blowing air through the false bottom. After the stack has been processed, it is removed by the same equipment used for stacking. 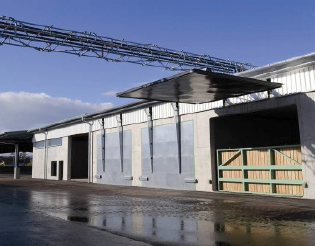 A silo reactor is a large, upright cylinder. Stackable organic material is augered to the top of the silo, and digested material is removed from the bottom. The cylindrical shape of silo reactors allows for efficient leaching through the length of the pile. A two phase silo reactor system is shown in Figure 4. In this arrangement, methanogenesis takes place in a separate reactor and effluent is sprinkled on top of the pile stacked in the silo. Digested solids may be composted by blowing air upwards through the silo. Silo reactors also exist in single phase configurations. The particular system shown in Figure 5 mixes incoming dry material with leachate before pumping to the top of the silo. 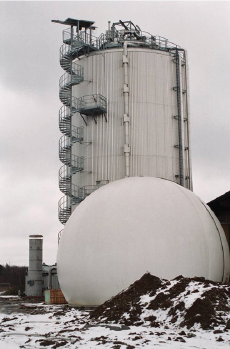 Almost any type of anaerobic digester can be used to convert leachate to biogas in wet methanogenesis.  However, high-rate, low-solids reactors, such as Fixed Film, Upflow Sludge Blanket (UASB) , and Anaerobic Sequencing Batch (ASBR) reactors, are generally employed due to their high efficiency.  More information on types of anaerobic digesters can be found in OSU Fact Sheet BAE 1750, Anaerobic Digestion of Animal Manures: Types of Digesters.