Fire is a naturally occurring process in all of the native ecosystems throughout Oklahoma and a recent study found that 74 percent of the residents of our state believe fire is necessary to manage the land1, but don’t want fire in their backyard.  Oklahoma does experience frequent wildfires, with 3,519 wildfires burning around 70,000 acres in 2007 and 5,572 wildfires burning more than 196,000 acres across the state in 20082. It is interesting to note that while wildfires get almost all of the publicity, there are more than 1,000,000 acres burned annually by Oklahoma landowners using prescribed fires to manage their land. From 2000 to 2007, more than 680,000 acres were burned by wildfires in the state. During the same time, more than 8,000,000 acres were burned by prescribed fires.

If unprepared, wildfire can become a threat to human life and personal property. During 2009, property damaged by wildfires in Oklahoma was estimated at nearly $30 million3. Suppression of these wildfires also cost the state taxpayers millions of dollars each year.  For example, in 2011, it was estimated that it cost around $5 million to extinguish a single wildfire that burned around 40,000 acres in southwestern Oklahoma. In the United States, the federal government spends billions of dollars each year to suppress wildfires. In 2002 and 2006, the USDA-Forest Service spent more than $1.6 billion each year on suppression of wildfires throughout the United States. In 2007, they broke previous records by spending $1.8 billion, and these costs have continued to increase annually4,5.

With the increase in the number of wildfires and acres burned, it is becoming more important to understand what conditions present the highest fire danger in order to prevent the loss of life and property. We also need to equip our planners and fire fighting professionals with the latest information. It is also essential to understand how the different seasons of the year impact wildfires in Oklahoma. With this information, basic guidelines can be established for fire management professionals to determine wildfire danger, as well as guide state and local officials in the implementation of burn bans.

Information from the state fire marshal’s office showed there were 17,499 wildfires reported from 2000 to 2007 in Oklahoma 6. During this time, the number of wildfires averaged 1,458 per month, but ranged from 3,099 in March to 556 in May (Figure 1). March also had the highest number of fires, except for those >10,000 acres, which was the highest in January and December. The average area burned per month was 56,955 acres with a total area of 683,455 acres burned during the eight years of available wildfire information. Acres burned per month was also comparable to the number of wildfires per month, with March having the highest total area burned, 168,336 acres, and May the least, 4,790 acres (Figure 2). The most notable difference between the number of wildfires and area burned is that throughout the summer, though there are a large number of wildfires, the actual area burned by these fires is quite small. From the 17,499 reported wildfires, 77 percent were less than 10 acres in size, while the larger wildfires (more than 1,000 acres) which receive most of the publicity made up less than a half of one percent (0.44 percent) of the total number of fires (Figure 3). 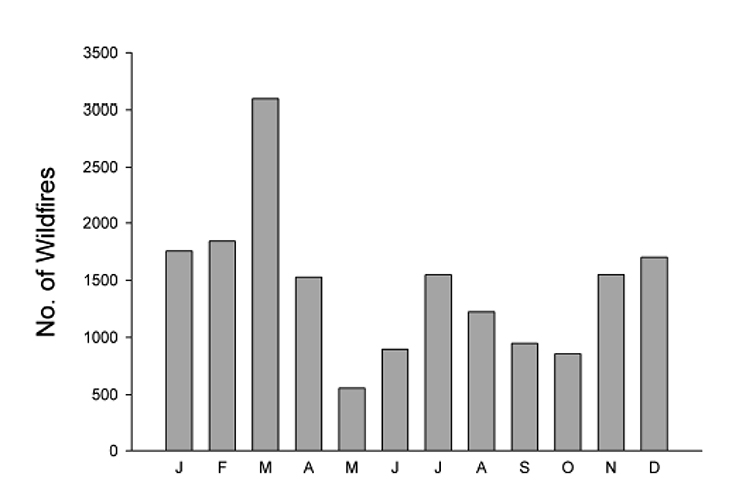 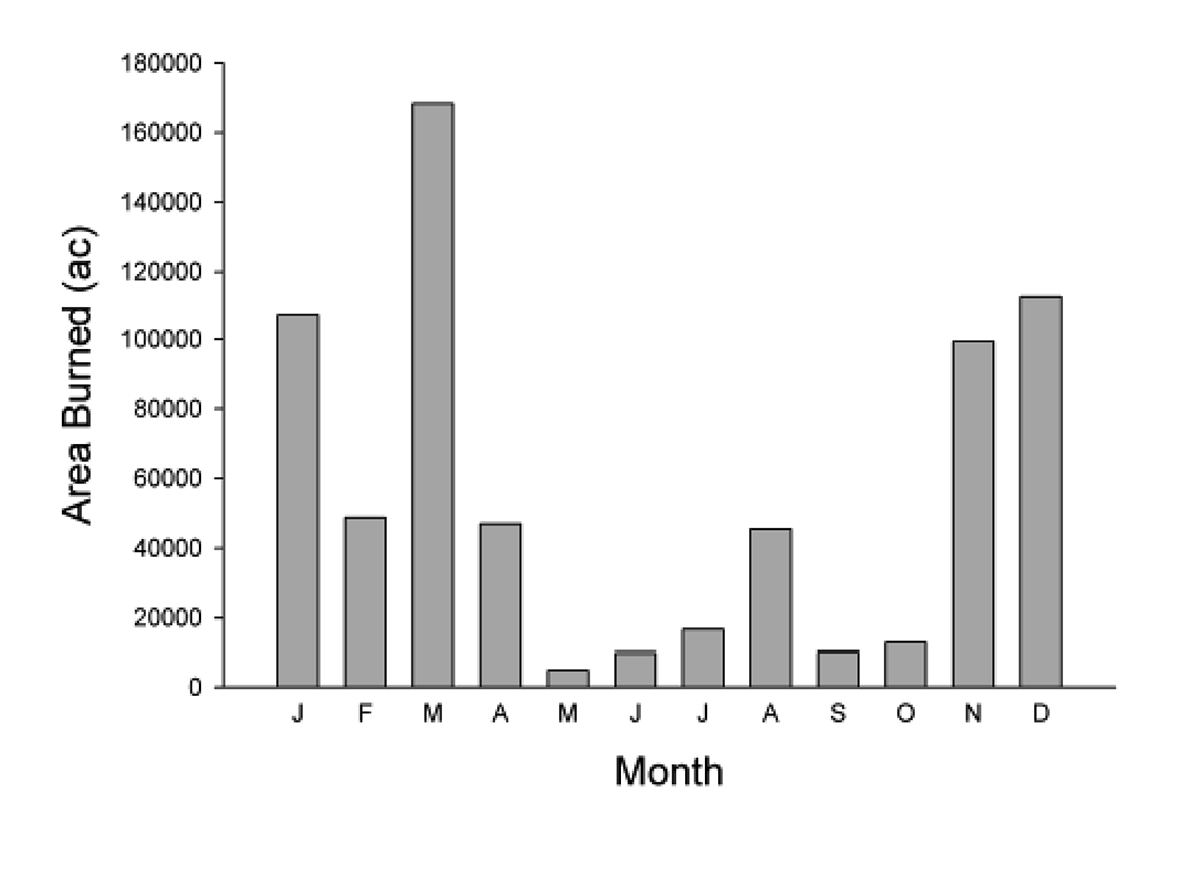 Figure 2. The total area burned by month by wildfire in Oklahoma from 2000-2007. Area burned per month was also comparable to the number of wildfires per month, with March having the highest total area burned, 168,336 acres, and May the least, 4,790 acres.6 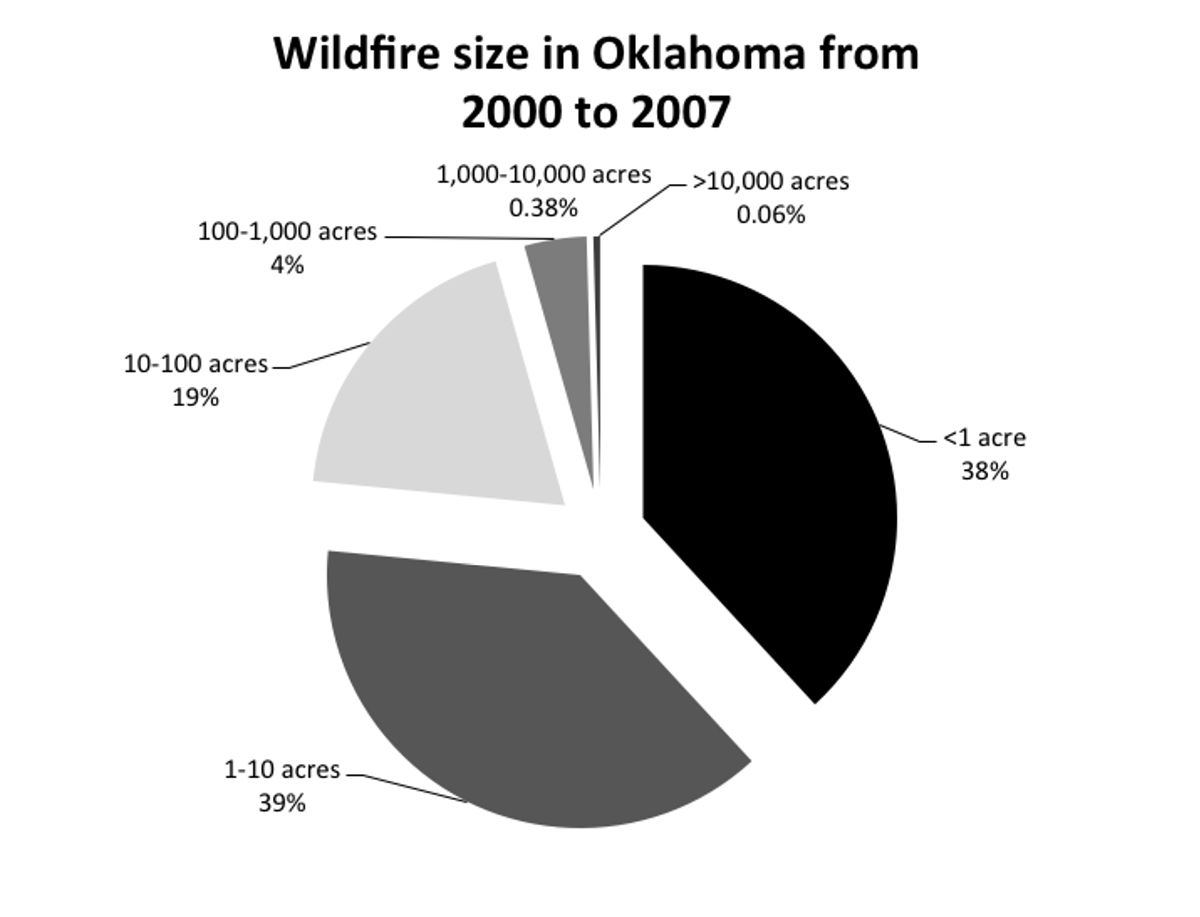 Figure 3. The percentage of wildfires by size from 2000 to 2007. From the 17,499 reported wildfires, 77 percent were less than 10 acres in size, while the larger wildfires (more than 1,000 acres) which receive most of the publicity made up less than a half of one percent (0.44 percent) of the total number of fires.

The majority of wildfires in Oklahoma occur in late fall, through winter and into early spring, which coincides with dormant vegetation and the time of year the state receives the least amount of precipitation7 (Figure 1). The number of wildfires declines during mid-spring when vegetation begins to green up, with an additional peak in wildfire activity occurring in July and August before again declining into the fall. Most wildfire activity in the state occurs when fine fuels are dormant and at their driest due to lower precipiation7.  This pattern is normally consistent unless there is some type of extreme weather event, such as a drought. 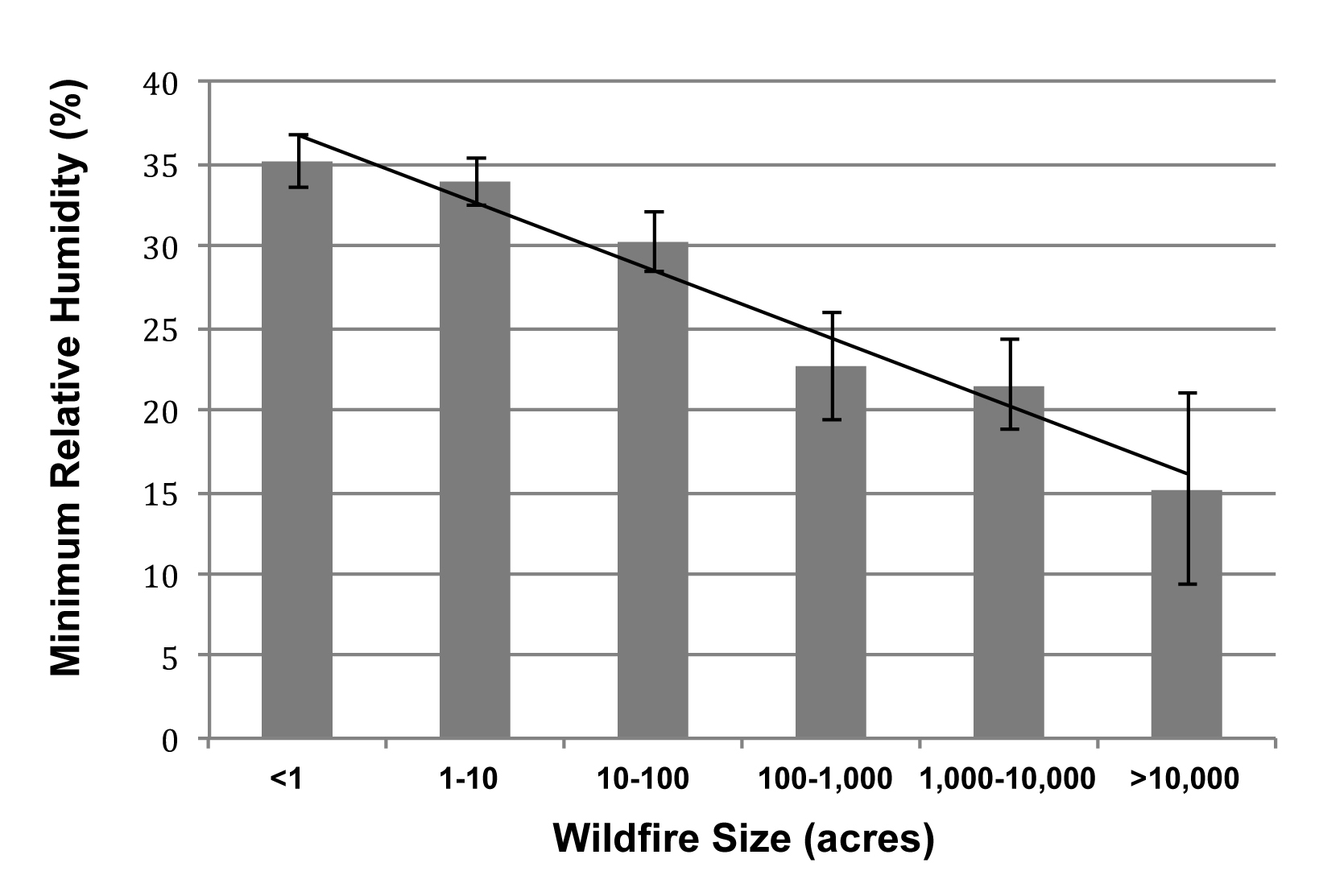 Figure 5. Variation within and across wildfire categories is high, even a slight amount rainfall on the day of wildfire has a significant negative relationship with fire size.6 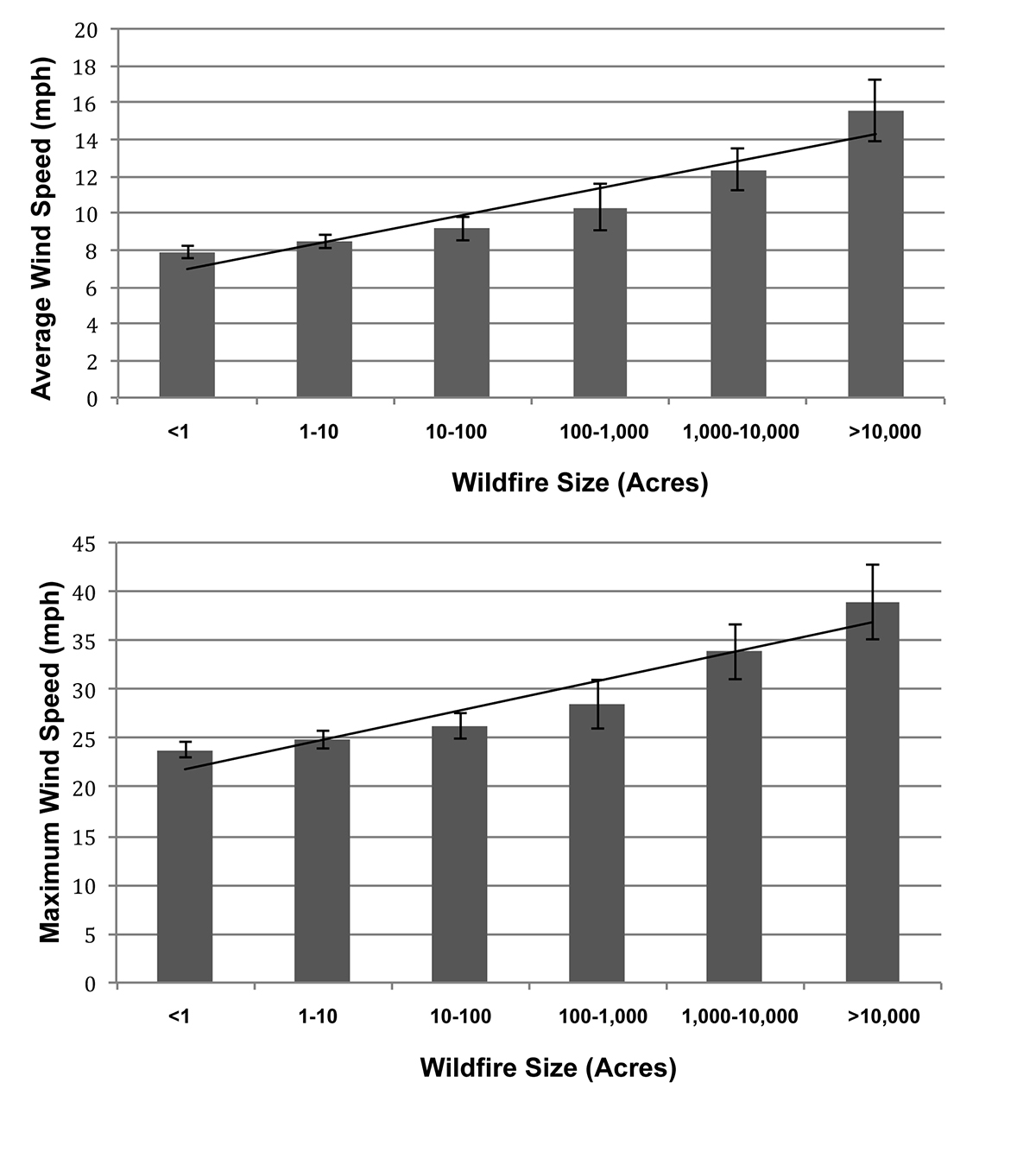 Weather conditions are some of the best predictors to determine present and forecasted wildfire danger. But by also looking at the past wildfire weather data for Oklahoma, it is possible to identify the strongest relationships between specific weather variables and wildfire size so emergency personnel can be prepared for those events. Our research shows that high wind speeds are the main factor to consider for high fire danger6. Higher wind speeds dry out fuels and increases the rate of fire spread, along with increasing spot fire potential, which in turn creates conditions favorable for large wildfires8.

The impact of wind can be seen in the March wildfire data. March is one of Oklahoma’s windiest months7 and it has the greatest number of wildfires, along with the largest number of acres burned. On the other hand, March cannot be placed in a permanent burn ban, because it is the main month for land managers in the state to conduct prescribed burns, and more than half the days during that month can be suitable for conducting prescribed burns9.

Moisture through precipitation and relative humidity is the second most important factor in the distribution and size of wildfires. Most of the large wildfire events (more than 1,000 acres) in our state, occur in December and January6, which coincides with dormant vegetation and periods with the lowest precipitation and relative humidity7. By examining the month of May in previous graphs we can see how moisture impacts wildfire. May has the highest average precipitation across 90 percent of the state7 and has the fewest number of wildfires with the least amount of area burned. The least amount of wildfires and lowest total area burned in the state occurs between May and October (Figures 1 and 2). These months coincide with when the state receives 62 percent of its annual precipitation7 and when most vegetation is green and actively growing. All these factors help reduce flammability of fuels and the occurrence of wildfires.

These findings demonstrate the relationship between relative humidity, wind speed, and season of year to provide a model to predict wildfire danger. This information is important for fire management personnel to understand so that they can be better prepared to address wildfires in our state. Also this information should assist decision makers on issuing burn bans.

It also important for homeowners and landowners to be prepared before a wildfire occurs in their area. Homeowners should consult the Oklahoma Forestry Services website (http://www.forestry.ok.gov/howtoprotectyourhome) for information about protecting homes and communities from the impacts of wildfires. The vegetation in Oklahoma is adapted to fire and it will burn no matter what we do to try and stop it. Research from all across the nation has shown over and over again that the more we restrict the safe and controlled use of fire, the larger and more devastating wildfires become. It is important to continue to promote the use of prescribed fire and continue to educate everyone on its importance. 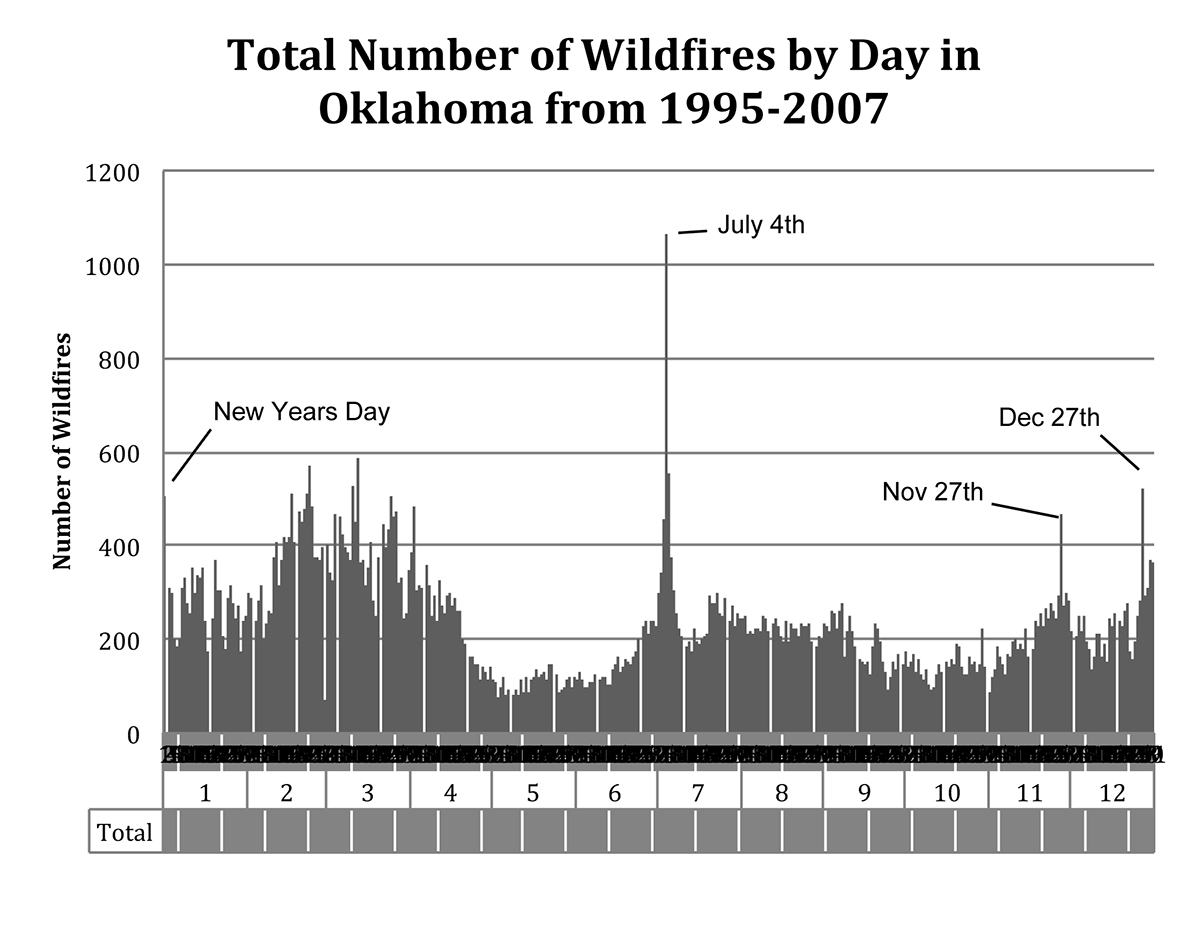 Figure 7. The total number of wildfires by day in Oklahoma from 1995-2007. Note the number of fires that occur on July Fourth and on or near other holidays (Thanksgiving, Christmas, and New Years). 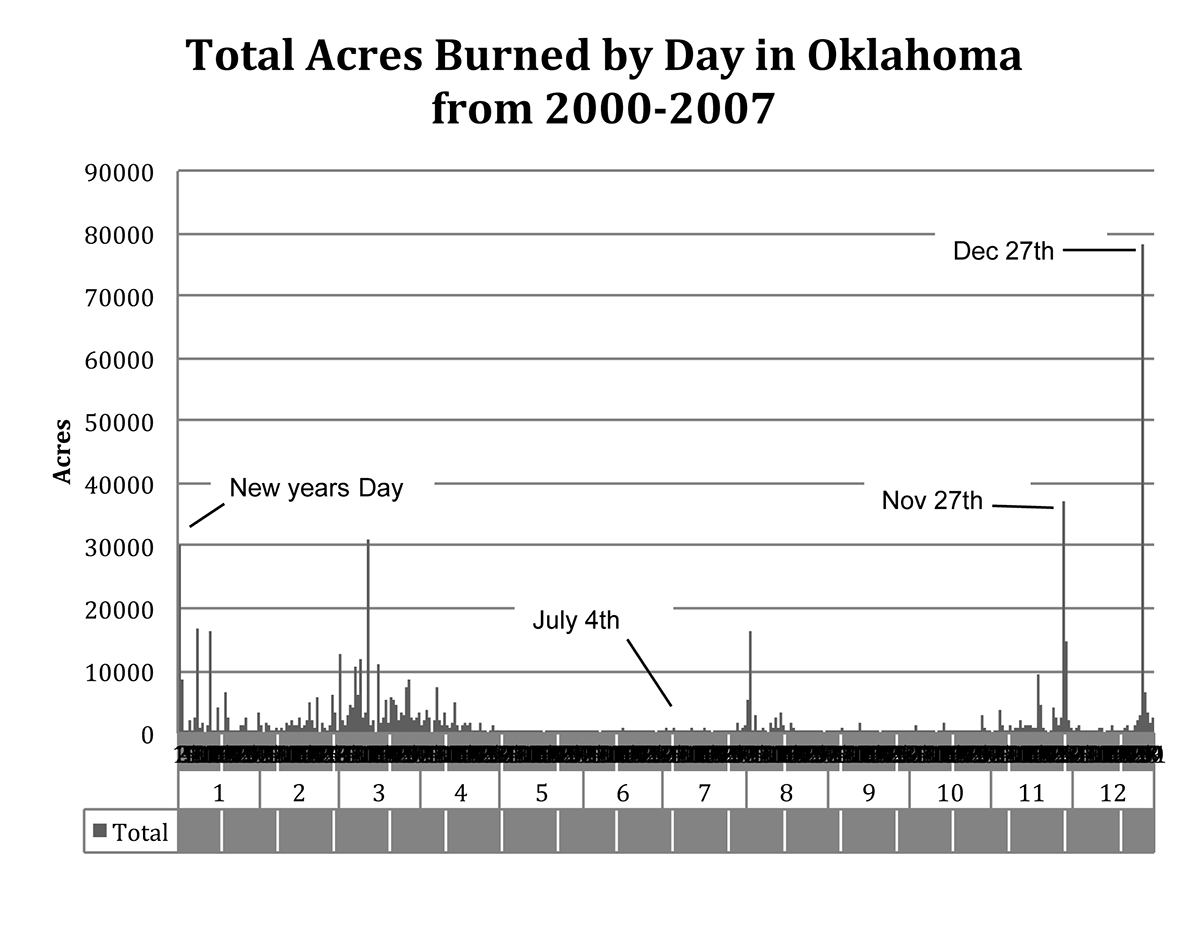 Figure 8. The total acres burned by day in Oklahoma from 2000-2007. Notice that July Fourth is not even visible on total acres burned. Three of the top four days with the most acreage burned are on or near other major holidays (New Years, Thanksgiving, and Christmas) and occur during the period when vegetation is dormant and more flammable.

There are specific days that most wildfires occur on in our state. By far the Fourth of July holiday had the highest number of wildfires reported from 1995 to 2007 (Figure 7), but an extremely low amount of acreage burned, due to time of year and green vegetation (Figure 8). It is also fascinating to find that from 1995 to 2007 some of the highest number of wildfires and acres burned per day occurred on or near a major holiday (New Years Day, Thanksgiving, and Christmas), probably due to more people being home and when dormant vegetation is more flammable.

The effects of fire on livestock fencing is a concern following wildfires, as well as before applying prescribed fire. There are many opinions and beliefs about...

The background information, damages and a fix for armadillos causing harm to home lawns.