GERM DAMAGE (Sick)
Kernels which are damaged as a result of heat but are not materially discolored shall be considered damaged.

GERM DAMAGE (Mold)
Kernels which have mold in the germ shall be considered damaged. Note: The bran coat covering the germ should be removed carefully; scraping the bran coat too deep could remove the mold.

HEAT DAMAGE
Kernels which are materially discolored and damaged by heat shall be considered damaged. It is necessary in most cases to cut the kernels to determine if the color of the cross-section is reddish-brown, mahogany, or creamy.

BLACK TIP FUNGUS
Kernels which are affected by Black Tip Fungus to the extent that the fungus growth is on the germ and extends into the crease of the kernel shall be considered damaged.

BLIGHT OR SCAB
Kernels which have a dull, lifeless, and chalky appearance as a result of disease shall be considered damaged. The germ and crease may also have a moldy appearance. Kernels which are not damaged enough to function as scab damage should be examined further for moldy germs and creases.

Kernels which are green (immature) in color shall be considered damaged. The green color must be intense and without any yellow appearance.

SPROUT DAMAGE
Kernels which have the germ end broken open from germination and show sprout, or from which the sprouts have been broken off, shall be considered damaged.

INSECT DAMAGE
Kernels which have been bored or tunneled by insects shall be considered damaged. 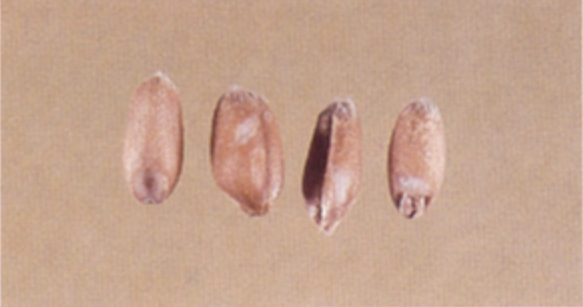 INSECT CHEWED (NOT DAMAGED)
Kernels which have been chewed by insects or rodents but are entirely free from refuse, webbing, insects, or other types of damage shall be considered sound kernels. 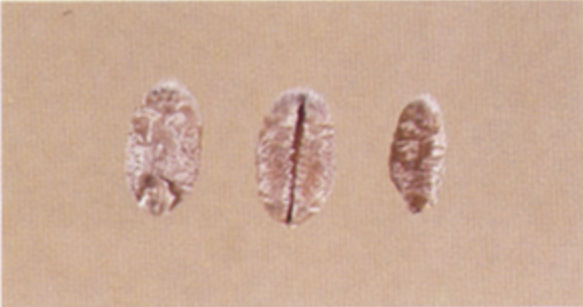 FROST DAMAGE (BLISTERED)
Kernels which have distinct frost blisters extending around the back of the kernel and into the crease shall be considered damaged. 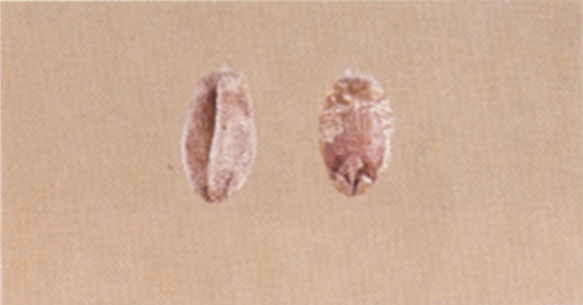 FROST DAMAGE (CANDIED)
Kernels which have a distinctly wax-like or candied appearance shall be considered damaged. Frost-damaged (candied) kernels can be greenish, greenish-yellow, brownish, or blackish in color. They frequently have dark stripes showing through the sides of the kernels. 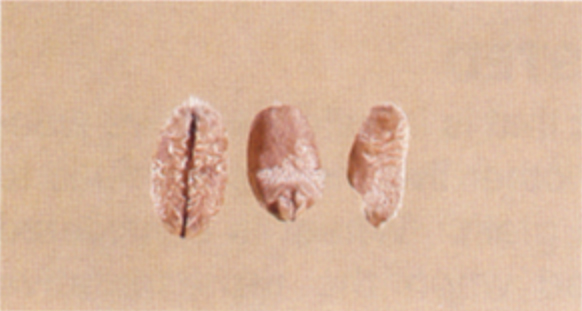 FROST DAMAGE (FLAKED)
Kernels which have a slightly flaked-off bran coat due to frost shall be considered damaged. Evidence of frost must be present. Do not confuse flaked by frost with kernels which have had the bran coat rubbed off because of handling. 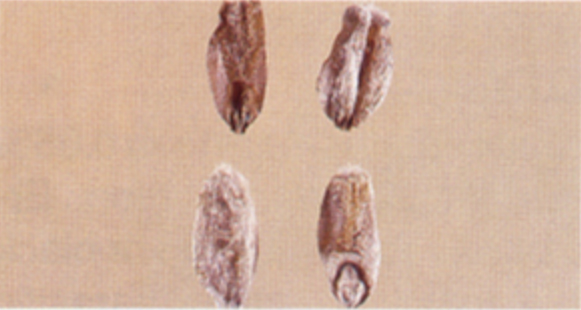 Whole kernels of wheat which are 50 percent or more covered and pieces of kernels which are discolored and covered with a mold-like substance shall be considered damaged.

Kernels which have cracks, breaks, or chews that contain mold or fungus shall be considered damaged. 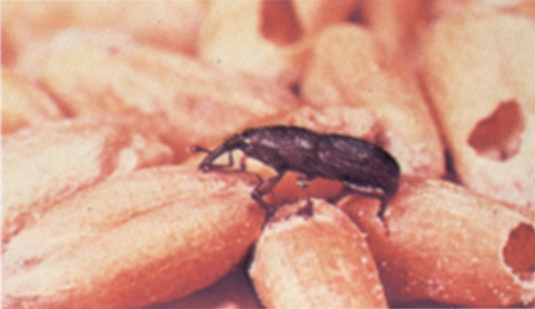 INFESTED
Wheat that is infested with live weevils or other live insects injurious to stored grain. Wheat is considered infested when the representative sample, or lot as a whole (stationary) or component sample (continuous loading/unloading of shiplots and bargelots), contains two or more live insects injurious to stored grain. 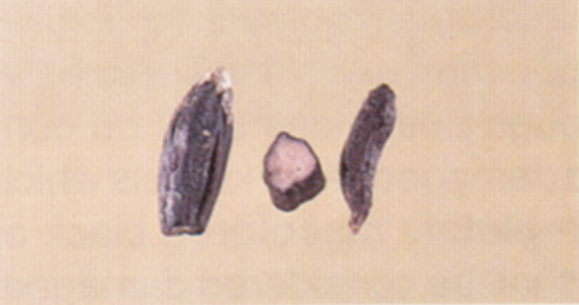 ERGOTY
Wheat that contains more than 0.05% of ergot in a 1,000-gram portion. Ergot is a hard, reddish-brown or black grain-like mass of certain parasitic fungi that develops on an infected wheat plant in place of the wheat kernel. 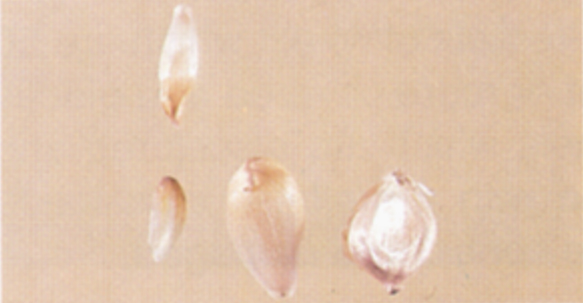 GARLICKY
Wheat that contains in a 1,000-gram portion more than 2 green garlic bulblets or an equivalent quantity of dry or partly dry bulblets. 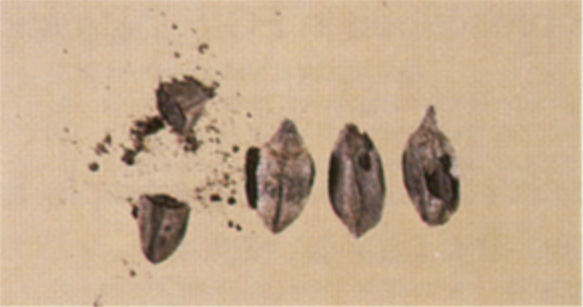 SMUTTY
Wheat which contains in a 250-gram portion smut balls, portions of smut balls, or spores of smut in excess of a quantity equal to 30 smut balls of average size. 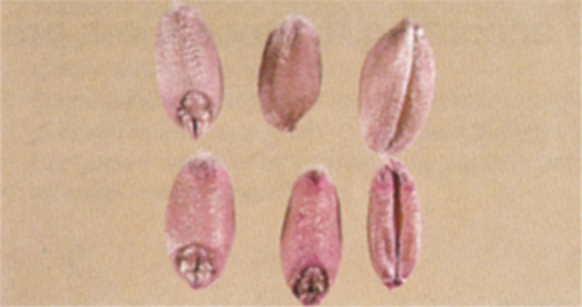 TREATED
Wheat which has been scoured, limed, washed, sulfered, or treated in such a manner that the true quality is not reflected by either the numerical grades or the U.S. Sample Grade designation alone.

All matter other than wheat that can be removed from the original sample by use of an approved device according to procedures prescribed in FGIS instructions. Also, underdeveloped, shriveled, and small pieces of wheat kernels removed in properly separating the material other than wheat and that cannot be recovered by rescreening or recleaning.

All matter that passes through a 0.065 X 3/8 oblong-hole sieve after sieving according to procedures prescribed in FGIS instructions.

All matter other than wheat which remains in the sample after the removal of dockage and shrunken and broken kernels.

The weight per winchester bushel (2,150.42 cubic inches) as determined using an approved device according to procedures prescribed in FGIS instructions.

Table 1A. Grade Requirements for Wheat

Table 1B. Grade Requirements for Wheat

U.S. Sample grade is wheat that:
(a) Does not meet the requirements for the grades U.S. Numbers 1, 2, 3, 4, or 5; or
(b) Contains 32 or more insect damaged kernels per 100 grams of wheat; or
(c) Contains 4 or more stones or any number of stones which have an aggregate weight in excess of 0.1 percent of the same weight, 1 piece of glass, 3 or more crotalaria seeds (Crotalaria spp.) 2 or more castor beans (Ricinus communis L.), 4 or more particles of an unknown foreign substance(s) or a commonly recognized harmful or toxic substance(s), 2 or more rodent pellets, bird droppings, or equivalent quantity of other animal filth per 1,000 grams of wheat; accumulation of 4 or more of any of these; or
(c) Has a musty, sour, or commercially objectionable foreign odor (except smut or garlic odor); or
(d) Is heating or otherwise of distinctly low quality.

1 These requirements also apply when Hard Red Spring wheat or White Club wheat predominate in a sample of Mixed wheat.

3 Defects include damaged kernels (total), foreign material, and shrunken and broken kernels. The sum of these three factors may not exceed the limit for defects for each numerical grade.

4 Unclassed wheat of any grade may contain not more than 10.0 percent of wheat of other classes.

Grain that, before the removal of dockage, consists of 50% or more common wheat (Triticum Aestivum L.), club wheat (T.compactumHost.), and Durum wheat (T. durum  Desf.) and not more than 10% of other grains for which standards have been established under the United States Grain Standards Act and that, after the removal of dockage, contins 50% or more whole kernels of one or more of these wheats. There are eight classes for wheat.

Wheat of other classes

We wish to express sincere appreciation to representatives of the Wichita Field Office of the Federal Grain Inspection Service for their assistance in revising this publication.  Appreciation is also extended to the Oklahoma Grain & Feed Association, 2309 N. 10th, Suite B, P.O. Box 1747, Enid, Oklahoma 73702.

The photographs are not slides used by the Federal Grain Inspection Service and are intended for illustration only.  Since the intensity of the reproductions may not duplicate the FGIS line slides, we do not recommend that they be used for grading purposes.