Valuing Food Safety in Fresh Produce: Do Consumers Care and Will They Pay?

FSMA and the Produce Safety Rule

The Food Safety Modernization Act (FSMA) of 2011 has been a significant advance in food safety regulations, but the already-being-revised rules have also been a source of uncertainty for many agricultural producers. The Produce Safety Rule (PSR), which addresses food safety for fruits and vegetables that are predominantly consumed raw (i.e. not cooked), introduced several never-before-regulated items impacting farmers’ operations. Yet, even after the initial phase-in of this rule for large produce farms (>$500K average sales over three years, adjusted for inflation) in January 2018 and medium produce farms (>$250K but less than $500K annual sales) in January 2019, certain aspects of the “final” rule are being reconsidered.  Water quality testing methods and application times for biological soil amendments have been – or might be – changed, and even alternative FDA-approved PSR training programs to meet FSMA mandates now are being considered.

Regardless of the actions taken or future revisions that may be approved, the PSR potentially adds significant costs and recordkeeping requirements for fresh produce suppliers. Even though smaller producers who market their produce through local outlets such as farmers markets may be exempt from the PSR (see Figure 1) they still must identify as being exempt from the PSR, which itself may result in additional costs for identifying signage and recordkeeping to prove exemption.  Furthermore, being exempt from the PSR does not mean that smaller producers are exempt from the liabilities associated with a food safety incident.  Still, FSMA and the PSR are making strides in responding to consumer demands for greater food safety and more transparent accountability.  But one question remains: Are consumers willing to pay more for those assurances? 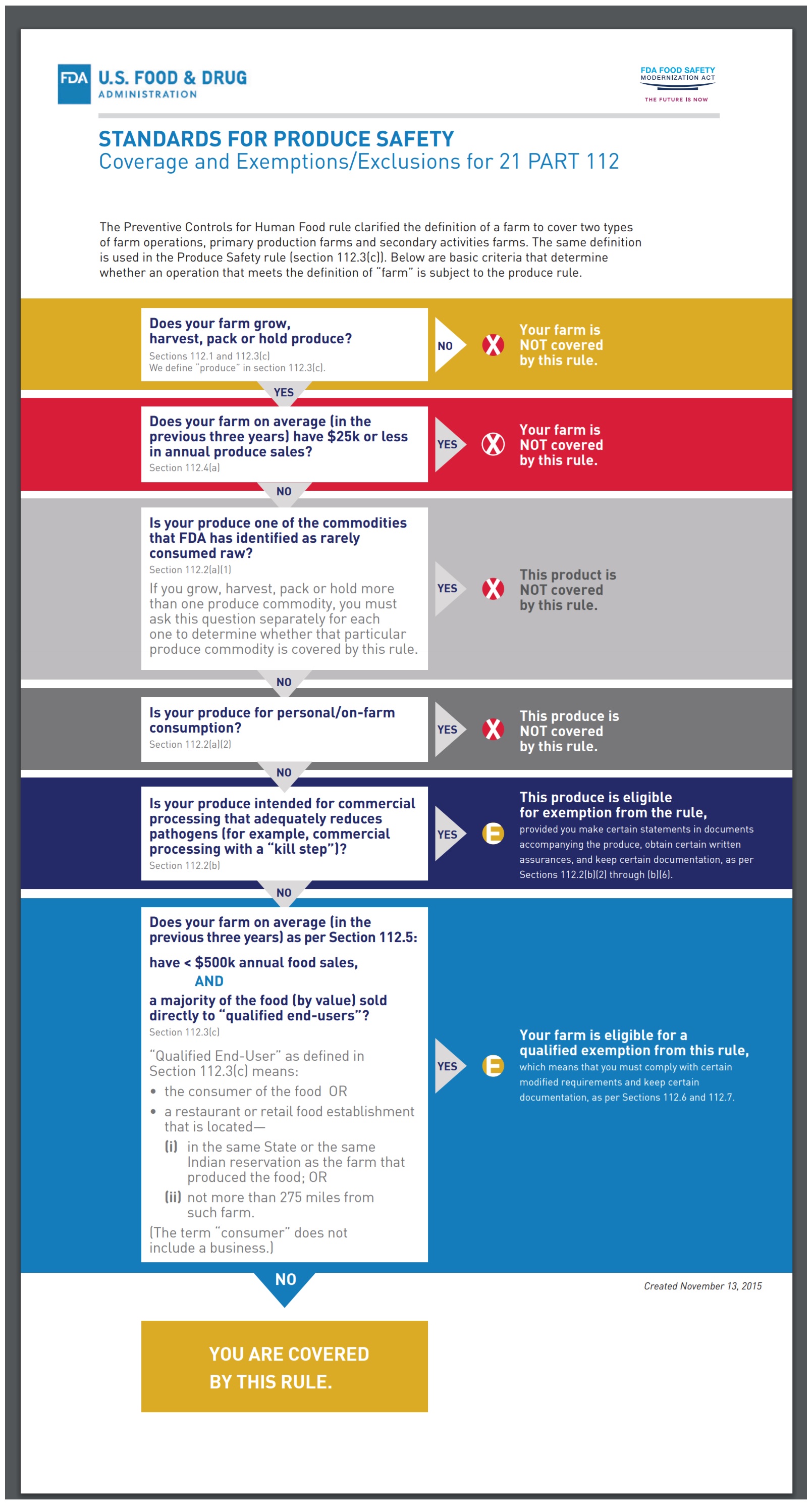 Will Consumers Pay More for a Food Safety Label?

Whether or not fresh produce farmers must comply with the PSR, the entire fresh produce industry must contend with consumer preferences for safe food – or at least their preferences for the perception of safe food. The concept of locally sourced produce being fresher, healthier and safer has been used as a marketing strategy for local food channels. But, in reality, “local” does not necessarily mean “safer” and “bigger” does not necessarily mean “riskier” when it comes to food safety. In fact, consumers may display varying levels of perceived risk for produce received from different marketing channels.

Neill and Holcomb (2019) found most consumers would actually pay less for locally-sourced tomatoes from PSR-exempt operations compared with tomatoes from larger-but-still-local farms that must comply with the PSR. Younger consumers, who tend to spend more money on food away from home (i.e. eating out) than those who are older than 50, were especially inclined to pay extra for tomatoes from PSR-compliant suppliers.

Neill and Holcomb (2019) also asked consumers if they perceived a higher risk of foodborne illness from produce that is exempt from the PSR. They found most consumers perceive an equal risk between exempt and nonexempt produce. However, risk perception can depend on a number of factors, including the age of consumer (as seen in Figure 2), the size of the produce farm (regardless of PSR compliance), the level of information provided to the consumer, and farmer participation in third party certification programs like Good Agricultural Practices.

What Does This Mean for Fresh Produce Suppliers?

If the consumer preferences found by Neill and Holcomb (2019) were applied to the entire produce industry, the differences in willingness to pay for food safety measures would represent revenue losses of between 3.34% to 4.50% for the fresh produce industry. Being a $42.7 billion industry, that equates to annual costs of $1.4 billion to $1.9 billion. However, more work needs to be done to truly capture the tradeoffs in consumer preferences and full industry impact. Neill and Holcomb (2019) focused on locally grown produce, but did not specifically address consumer perceptions of buying local produce at a farmers market versus a grocery store. Some research has already suggested the personal connection at a farmers market and the idea of supporting local farmers and economies is preferred by consumers (Malone and Lusk 2017). This could offset the economic costs of not being PSR compliant, but this assumption only can be tested with further research.

How Do PSR-Exempt Producers Adapt to Changing Consumer Perceptions?

It’s not possible to eliminate all food safety risks from fresh produce, but these risks can be minimized by following proper food safety measures. While research has not yielded a clear answer on the value of a food safety label, it has shown consumers adjust their buying practices based on their knowledge and perceptions of food safety risks (Neill and Holcomb 2019; Collart 2016; Shogren et al. 1999). PSR-exempt producers can provide consumers with assurances that the steps taken to reduce food safety risks on their exempt farms make their produce as safe as produce grown on farms that must comply with the PSR.  By doing so, they may convince consumers to be willing to pay more for the exempt produce.

How Can I Learn More About FSMA and the Produce Safety Rule?

The Oklahoma State University Robert M. Kerr Food and Agricultural Products Center (FAPC) and the Oklahoma Cooperative Extension Service (OCES) have worked to provide both producers and consumers with timely information on FSMA, the PSR and the impacts of regulatory compliance.  Furthermore, FAPC and OCES have coordinated to provide PSR trainings to both complying and exempt produce farms. For more information and details on PSR training events, please visit www.fapc.biz.

Selection of tomato varieties for the home or market garden should consider factors such as productivity, fruit characteristics, and disease resistance. Resista...