Oklahoma’s water law separates water into three basic types: (1) diffused surface water, (2) water in definite streams, and (3) groundwater. Each of these types of water has unique characteristics, and each is handled differently under Oklahoma Law. 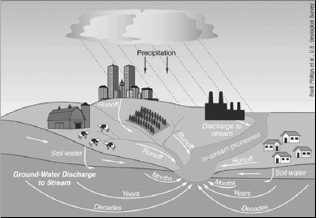 Diffused surface water is defined as “water standing [on the surface of the property], or flowing over or under its surface but not forming a definite stream.”1   Diffused surface water may sound like a technical term.  Most commonly, we would think of this form of water as “runoff.”  In the Oklahoma Water Law Handbook, we will use the word “runoff” to refer to what Oklahoma’s water law would call “diffused surface water.”

Runoff is the only type of water whose use is not regulated by the government, giving the landowner almost complete rights to do anything they wish with the water.2  In comparison, the use of stream water and groundwater is heavily regulated, but the right to use them may be regarded as a property right that may come with ownership of the land where they are found.

In its natural state, runoff is difficult to use.  As a result, many landowners dig ponds and construct dams to collect the runoff into one area so it can be used for livestock watering or aquatic habitat.  Strictly speaking, once runoff reaches a ditch or stream – anything with a definite channel that has defined beds and banks3  – it stops being runoff and becomes “stream water,” which is discussed below. In some circumstances, landowners may use dams across these ditches or streams to contain the runoff.  We will discuss this in more detail in “Oklahoma Diffuse Surface (“Runoff”) Water Law and Rules.”

While the image of a stream running through its channel definitely fits the definition of “stream water,” other somewhat surprising forms of water also fit the definition.  For example, the definition of “definite stream” includes the following language: “[t]he stream may flow intermittently or at irregular intervals if that is characteristic of the sources of supply in the area.”6  This means that a stream does not have to flow year-round to be considered a definite stream; once runoff reaches a dry stream bed and starts to flow down its channel, it has become stream water, even if that channel only flows after a rain.  Thus, even streams that only run during certain seasons or after major rainfall events (sometimes called “intermittent streams”) are still definite streams. Also, a definite stream that flows into a larger water body such as a lake is still defined as a “definite stream.” So, stream water can include water in ponds, lakes, reservoirs, and playa lakes.7  However, man-made farm ponds and “gully plugs” not located on definite streams and constructed under the supervision of Conservation Districts are not considered stream water.8

One aspect of defined streams that might come as a surprise is that they do not have to be on the surface of the land.  All water under the surface of the land is presumed to be percolating groundwater.9 However, if an underground stream with defined beds and banks can be shown, the water in the underground channel will be considered stream water. 10

The last type of water we will discuss is groundwater. As you might suspect by

now, “groundwater” is defined as “fresh water under the surface of the earth regardless of the geologic structure in which it is standing or moving outside the cut bank of any definite stream.” Note two parts of this definition. First, groundwater is defined as “fresh water.”11 The statute that gives us this definition also defines fresh water as “water which has less than five thousand (5,000) parts per million total dissolved solids” (total dissolved solids is a measure of water quality scientists use to indicate how concentrated salts or other mineral particles are in a given sample of water). In other words, water that contains more than 5,000 parts per million of dissolved solids is defined as “salt water.”12 There are no provisions for the allocation or use of salt water (though there are numerous regulations dealing with its disposal). If salt water is encountered while looking for other forms of water, care must be taken to prevent it from mixing with fresh water. 13

Second, the language “standing or moving outside the cut bank of any definite stream” clarifies underground water near or underneath a stream is groundwater.  Let’s look at the diagram below:

Oklahoma’s water law contemplates imaginary borders formed by the bed and  banks of a defined stream.  Even if we are not withdrawing water from within the bed and banks of the stream itself, we are still withdrawing water from the defined stream if our withdrawal point is within those imaginary borders.  However, if we take water from outside those borders, we are taking “groundwater,” even if the water seeped into the ground from the stream.14 Thus, both Well 1 and Well 2 would be taking “groundwater.