Proper pruning when a tree is young will ultimately result in a tree that is structurally stronger, longer-lived, and less costly to maintain.

Training a tree early in its life may lessen storm damage when the tree approaches maturity in 15 to 20 years (Figures 1a and 1b). Pathogens and pests often enter wounds as a result of storms. Training young trees should help reduce storm damage and expensive pruning operations when the tree is mature.

The tree species you select will determine the amount of training or pruning required. For example, most oaks and sycamore form strong branching habits with minimum training effort, while some elm, crabapple, and fruit trees may require pruning repeatedly in the first three to five years after planting. In fact, crabapple and other fruit trees may require annual pruning even at maturity. Refer to fact sheet HLA-6228, “Annual Pruning of Fruit Trees.”

Figure 1a. A tree that is not pruned when young may grow into an unattractive tree.

Figure 1b. A tree that is pruned when young grows into a strong, attractive tree.

There is no need to prune a newly-planted tree unless branches have been damaged. It has been found that removing tips and buds of young trees slows root growth. If trees are left unpruned, expanding buds and new leaves help root expansion and tree establishment. Damaged branches can be removed at their point of origin, or they can be cut back to a lateral branch that will yield foliage and bolster establishment the first season.

Training begins the year after transplanting, continues through the next three to five years, and should be complete within eight to 10 years. Following the training period, only maintenance pruning should be needed. Refer to fact sheet HLA-6409, “Pruning Ornamental Trees, Shrubs, and Vines.” Most training is done during the growing season, whereas most pruning is done in the dormant season.

Early in the tree’s life, decide which closely spaced scaffold branches to keep. Scaffold branches are large branches that form the main structure of the tree. Try to visualize how the tree will look as it thickens in years to come. Know the natural form of the species. Remember — branches do not slowly rise above the ground! As a tree grows, branches retain their position on the trunk, though they increase in diameter and become more crowded. Spacing scaffold branches radially and vertically allows growth to be channeled where it will be more effective (Figure 4). Major shade tree branches should be 18 to 24 inches apart and spiral around the trunk. Branches of small trees should be 8 to 12 inches apart and spiral around the trunk. Five to nine major scaffold branches are normally selected for shade trees. No more than 1/4 of the canopy should be removed at any one time. Depending on the tree’s growth rate and branching structure, this training may take several years.

Some trees such as maple, fruitless mulberry, and cottonless cottonwood grow rapidly all season and thus decisions must be made during the growing season. Weeping forms of vigorous trees like mulberry and willow also require close attention (Figure 5).

Pines are trained as soon as the candles have finished their spring flush of growth. When desired, pines can be sheared into formal shapes while the candles are still tan in color. This should be done before the needles appear on the new growth.

During the training years, frequent inspections must be made to channel growth in desirable directions. The more vigorous species require closer attention. At the end of the season after leaf fall, inspect the tree and make any necessary corrective cuts.

The tip of the main trunk of a young shade tree should not be cut back. Heading back, as is practiced, is not beneficial to most trees and often results in undesirable forks in the main trunk. This is especially true of species that already fork, such as elm and maple. Side branches, however, can be shortened at planting if desired. Make cuts as described in the  “bud and branch angles” section of this fact sheet (Figure 6).

Pecans are a unique tree species. Their survival is greatly increased if the trunk is cut back one half of its length at planting and the resulting growth trained to be a central leader.

Street tree limbs should not be closer than eight to 10 feet to the ground. Fruit trees and ornamental species should not have branches closer than four or five feet above ground, or they should be planted where their lower branches will not interfere with routine activities such as recreational activities or mowing (Figure 3).

Other species such as Japanese maple, purple leaf plum, and ornamental cherries require little training other than to remove tangled or crossed branches that interfere with each other. A few cuts now and then should keep such trees developing well.

Heavy crops of seeds or fruits on young trees, such as fruit trees or for example Amur maple, can distort their shape. Either remove the fruit or seeds or brace the tree. 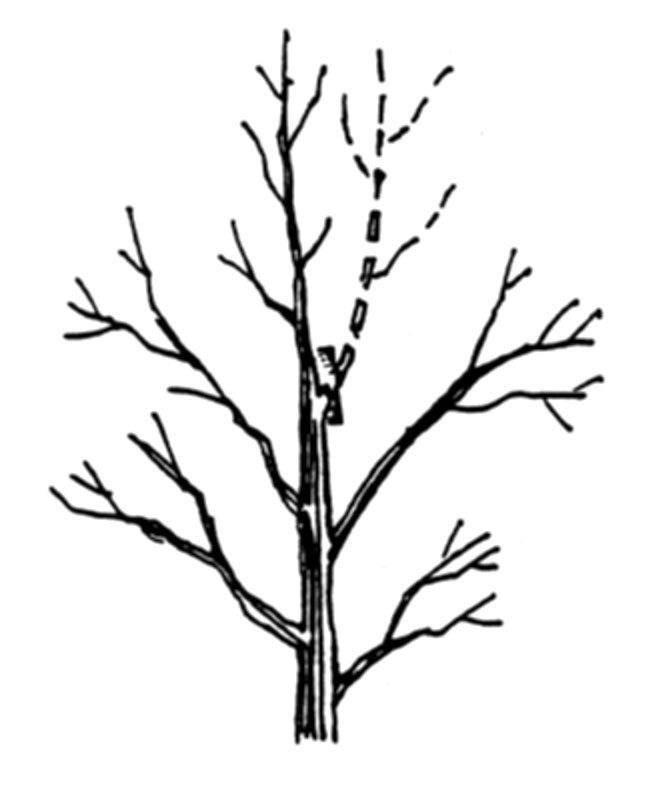 Figure 2. Training the tree to a central leader. 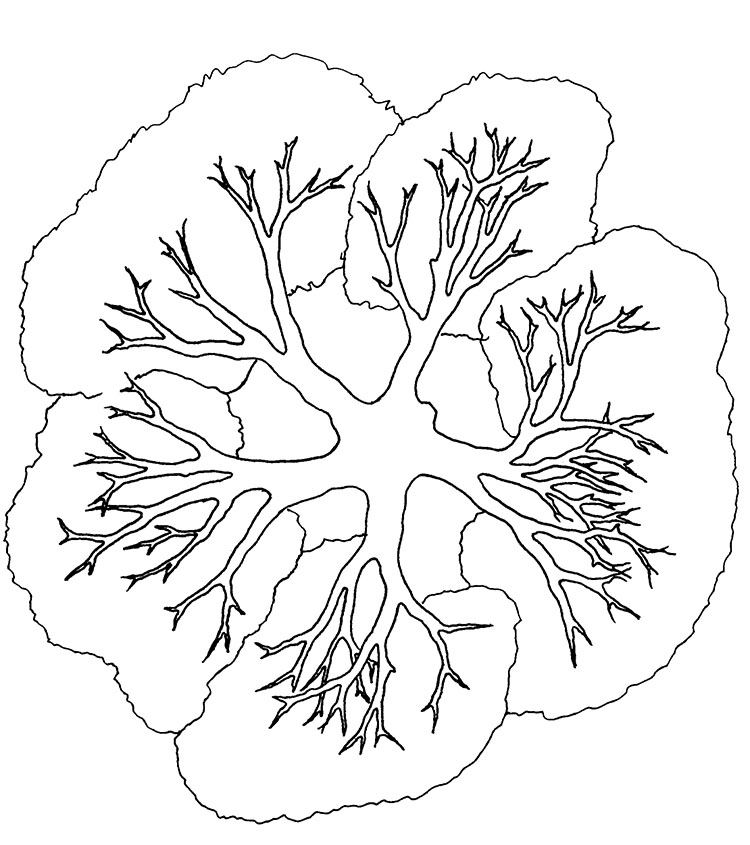 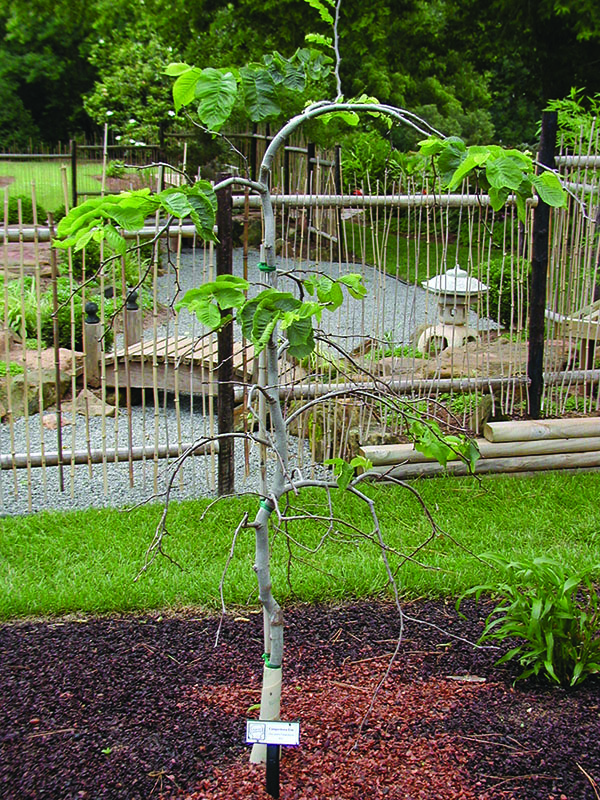 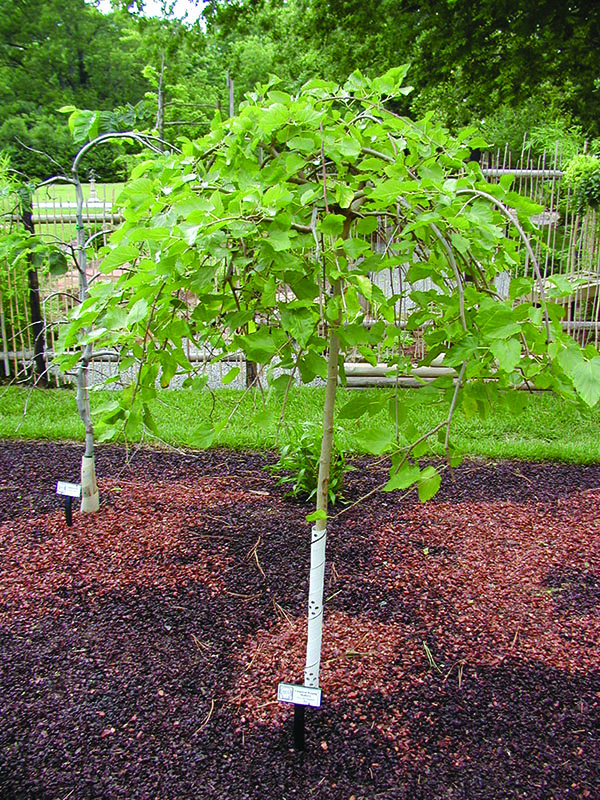 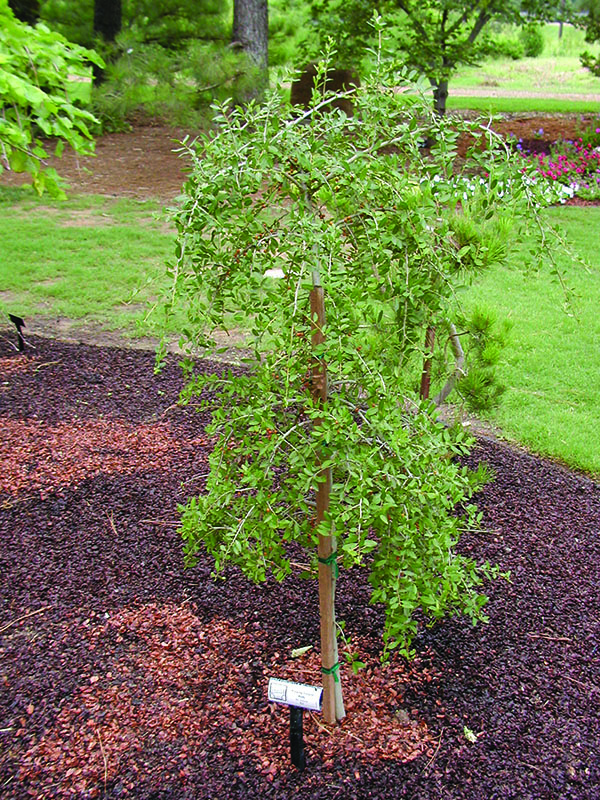 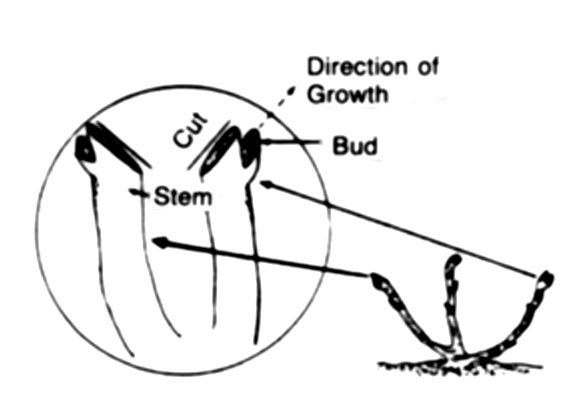 Figure 6. When reshaping, cut back to buds or branches growing away from the center of the plant. Cut about one-fourth inch above the bud and downward at about a 45 degree angle.

Narrow “V” forks in the main trunk may split and destroy some species at maturity or during storms. Narrow “V” forks low on the trunk should be removed as soon as they are observed. However, if the tree is three to five years old or older, the best choices are no longer available. Remove one or more of the branches which form narrow forks with the trunk or central leader. Make the cuts nearly flush or at a sharp angle. The remaining trunk may need to be staked to a vertical position. Never allow a wire to rub or bind the trunk.

U-shaped forks should be left alone.

When selecting permanent scaffold or major branches, select those having a wide angle with the leader. Branches of less than 45 degrees or more than 90 degrees at the point of attachment should be avoided. However, exceptions exist. Zelkova, for example, and a few other species have naturally acute (<45 degree) angled branches.

Should vigorous branches form, cut them back or the end of the shoot could simply be pinched off to curtail its development. You may have to cut back or pinch off such vigorous shoots several times during the growing season. Remove the unwanted branch before its diameter begins to approach the developing trunk or leader’s diameter. This time is usually three to five years away.

By studying bud position and vigor, growth can be controlled for any tree or shrub. To direct a branch in another direction, cut back to a vigorous bud or branch. Smaller, less vigorous buds and twigs will not control growth.

In general, cut back to buds or branches facing away from the leader or center of the plant (Figure 6). Also, low-hanging branch parts can be cut back to their point of attachment. 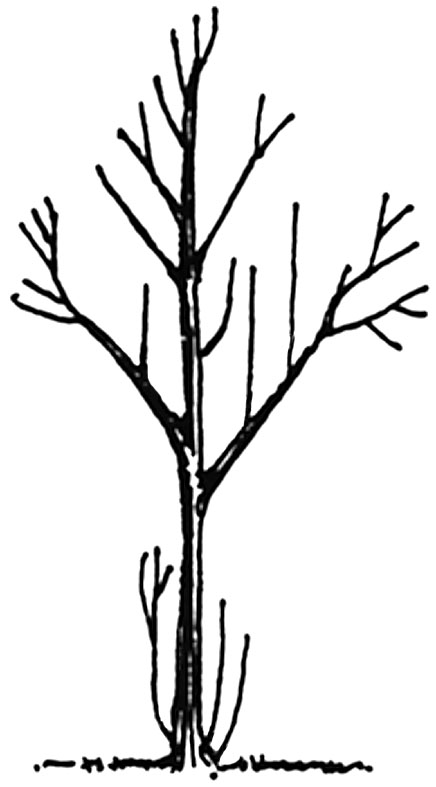 Figure 7. Water sprouts and suckers are “parasitic” sprouts that can occur at the base or inside the crown. They are rapidly growing, weakly attached, and upright. Usually they use more energy than they return to the tree. It is best to remove them as soon as possible when it is obvious they are vigorous sprouts.

It is best to leave some branches and twigs on tree trunks to help prevent sunscald damage. However, the mass should be kept pruned to within about 12 inches of the trunk. Don’t let the vigorous shoots get too big before removing them. Your tree will have a “twiggy” trunk for its first few years (Figure 8).

A whip is a young, unbranched tree. Wrap about one half of the trunk starting at the ground and working up. Polyurethane spiral wrap for trees is easy to use and effective. Simply unwind the end and slip it around the base of the trunk. Then continue to fit it around the trunk. It will not blow off and does not require tying. Polyurethane lasts for years and can be removed and used on another tree, at a later time. (Figure 9)

Aluminum foil from the kitchen can also be used as a wrap, with shiny side out.

Keep the trunk protected for two or three years between October and March of each year, or until the bark becomes woody. However, small leafy twigs may eliminate the need for wraps.

When finally removing vigorous unwanted branches, cut them almost flush with the trunk or to a collar if the branch has one. A collar is a swelling or ring around the base of the branch. The smaller the wound, the quicker the wound closure and the less chance of borer or rot infestation.

Maintaining tree vigor is the most important factor for achieving wound closure. Refer to fact sheet HLA-6412, “Fertilizing Shade and Ornamental Trees and Shrubs.” Pruning cuts should not be treated with a pruning paint. 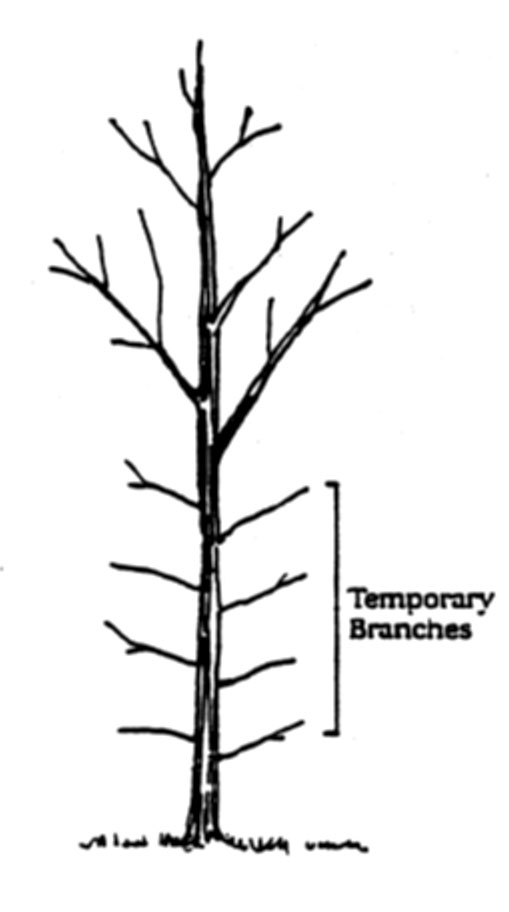 Figure 8. Branches below the lowest permanent branch can protect young bark from sun injury and add taper and strength to the trunk. 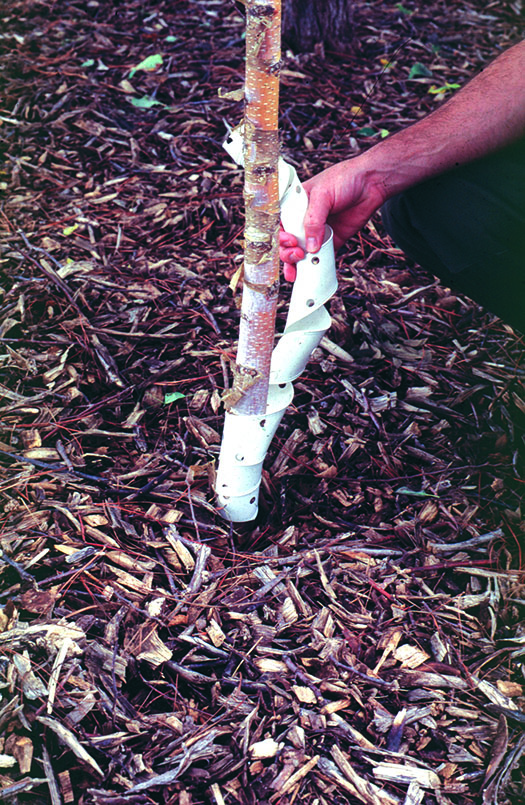 If a tree needs to be staked, use no more than absolutely necessary. Leave the tree as much freedom to move as possible. As the tree flexes or “exercises” it develops greater trunk diameter (caliper) and root growth. Staking trees with eye screws or other invasive hardware is discouraged. Also do not run wires or anything else around the trunk. Instead, use straps of plastic or cotton fiber chair webbing that has a grommet inserted through the ends of the webbing. Then, put the webbing around the tree and pass a wire through the grommet and tie it to a stake. Pull the tree straight as you attach the wire to a stake. The stake should be short enough or far enough away so that the tree does not rub against it in the wind. The soft webbing is less abrasive than the “hose and wire” method in common use (Figure 10). Strap and grommet staking kits are now commercially available.

If a tree with a trunk larger than two inches in diameter is purchased, it often needs to be staked to hold it in the ground until it roots into the soil. When it is stable, remove all stakes and wires. This often is accomplished within two growing seasons after transplant. Ground level/underground staking systems are also available for consideration. See an Oklahoma nursery and landscape professional for further information. 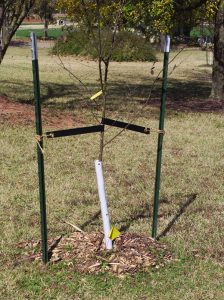 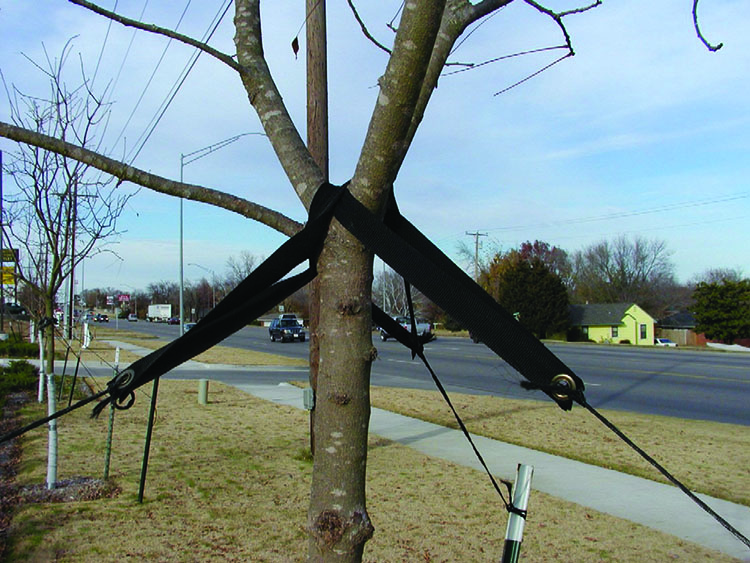 Figure 10. This method in no way damages the tree trunk when installed properly.