To fertilize or not to fertilize—that is the question. Young trees should be fertilized annually. Established or mature trees in a well fertilized lawn may not need this practice.

Fertilize young trees annually from the time they are transplanted until they become established or reach a desirable size. A grass-free circle three to four feet wide should be maintained around the tree or shrub for at least three years. Fertilizer may be scattered on the soil surface in this circle. Fertilizer is best applied between early spring and late July to early August while the plants are actively growing. During this time, the plants can utilize the nutrients available in fertilizers. A late summer fertilizer application can result in soft or succulent growth that may not harden-off prior to a freeze. Even though plant roots continue to grow during the winter months when soil temperatures are favorable (above 40oF), much of the nitrogen can be lost due to leaching or vaporization. If plants seem to be weak or nutrient deficient (determined by a soil test), then a fall application of fertilizer will be beneficial. Nutrient-starved plants should be fertilized to correct deficiencies after frost, but before freezing weather if possible. Lack of proper nutrition makes all plants subject to more winter damage.

To check tree growth for the current season, measure the twig from its tip to the first ring of bud scale scars (Figure 1). Last year’s growth is the distance between the first ring of scars and the next ring of scars. This latest growth will often have a different color on the twig than the previous year. You can usually find the bud scale scars for about the last three years of growth. Compare the length of the current season’s growth with the last two or three to figure the growth rate.

Shrub vigor can be figured the same way. However, the annual growth may be less than for a tree.

If the growth rate is satisfactory, additional fertilizer may not be needed. In fact, it could be detrimental in large doses to young plantings when there is little rainfall or inadequate irrigation.

Figure 1. Most young trees should grow an average of nine to 12 inches or more per year. Six to nine inches is good growth for established trees (A). Vigor is determined by the differences between annual bud scars (A & B). Less than six inches annual growth for a tree may indicate a need for fertilizer (B).

A complete fertilizer contains nitrogen, phosphorus, and potassium, in that order. The number on the bag must specify the percentage of each of these nutrients, as well as indicate the trace elements, including iron and magnesium. Trace elements, or micronutrients, are used in very small amounts. Soil pH strongly affects the availability of these micro-elements. All things being equal, pH controls the flow of nutrition to plants like a water faucet controls water flow from the well or reservoir.

It is best to base fertilizer choice and amount on a soil test. This test can be done for a nominal fee by the OSU soil testing lab.

To take a soil sample, select six or more random spots in the area. Never take soil from less than three spots. Dig a hole six to eight inches deep and take a profile slice one inch thick and put the slice of soil from each spot in a container (Figure 2). Mix the soil thoroughly and take a pint of the soil mixture to your county Extension office. The standard soil test will accurately reveal the pH, nitrogen, phosphorus, and potassium in your soil. Micronutrients can also be tested for an added fee. The report will include the proper fertilizer recommendation based on the analysis. 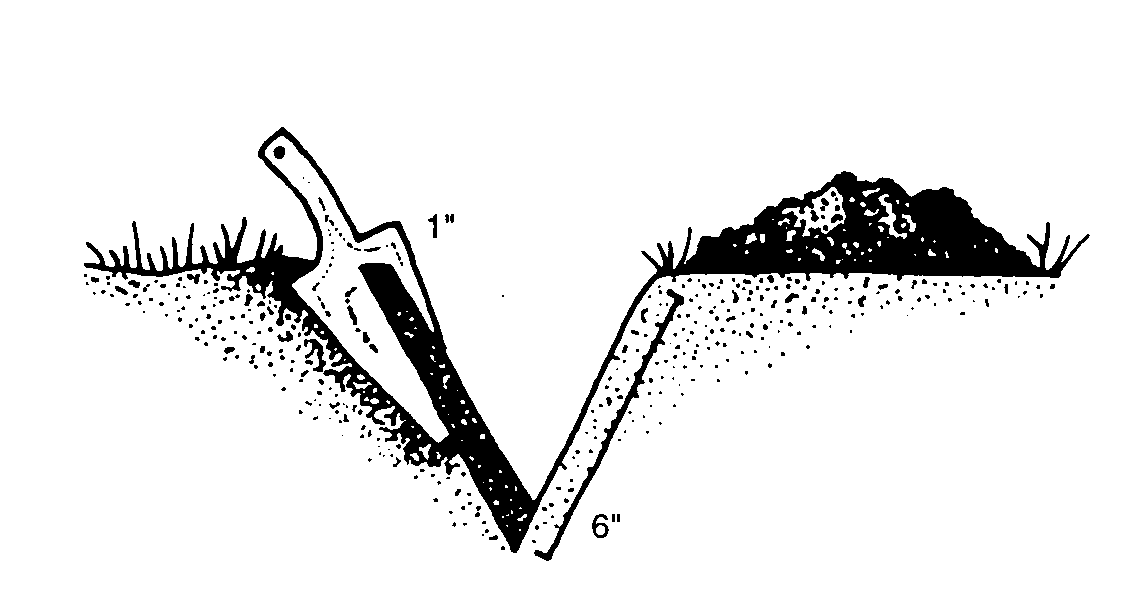 Figure 2. Take soil from the center of the spot where the tree is to be planted and three more spots about three feet from this spot. Take soil from no less than three spots from shrub bed areas. Place soil from each spot in the same container and mix thoroughly. If the soil in the bed and lawn areas are the same type, the soil sample from both areas may be mixed to comprise one sample.

In the absence of a soil test, base your fertilizer choice and amount on its nitrogen content. For young plantings, a complete fertilizer would probably be best. For established or mature trees, a fertilizer containing only nitrogen may be selected, especially if a complete fertilizer is applied to the lawn around the tree once or twice per year. Although forest trees respond mostly to nitrogen, remember that they are in their natural habitat, while urban trees are in an unnatural setting and most are growing in disturbed soils. Where large trees are growing in areas without regular lawn fertilizer applications, choose a complete fertilizer such as 16-6-12 or 12-24-12. Three pounds of actual nitrogen per 1,000 square feet per season is a reasonable amount for established plantings.

The quantity of fertilizer to apply on established ornamentals depends on the nitrogen content of the fertilizer you are using, the area fertilized, and the amount of new growth desired. Nitrogen controls vegetative growth, so application rates are based on this primary nutrient. Between one and six pounds of actual nitrogen per 1,000 square feet per season are recommended.

If you are following a low-maintenance approach to landscape management and want to keep the plants healthy, but minimize the amount of new growth that requires pruning, then you would fertilize at the lower end of this range (one to three lbs. of nitrogen/1,000 square feet). However, if you are fertilizing to encourage optimum growth of a new planting, then higher application rates (four to six lbs. of nitrogen/1,000 square feet [multiple applications over the growing season]) maybe used. Optimum growth fertilization is usually done only on herbaceous ornamentals, such as annual flowers, roses, or on newly planted ground covers to encourage their spread.

To compute the amount of fertilizer needed, measure the area under the tree. Measure the distance from a few feet beyond the end of the branches. Roots will grow to and several feet beyond the branch tips in most cases. Compute the area of shrub beds by measuring the length and multiplying by width. If roots are covered with paving, subtract that area from the total area (Figure 3 and Table 1).

Note: The root system of such tree species as cottonwood, elm, maple, mulberry, pagoda, and willow extend beyond the end of the branches by 30 to 50 percent. Therefore, enlarge your totals and area of application by that much for such species.

Figure 3. Stake off a square or rectangle that includes all the branch area plus five or six more feet on all sides. Do not include areas covered by paving. In this example, fertilizer is needed for a 1,200 square foot area.

Table 1. The amount of nitrogen fertilizers needed to supply from 1/2 to 2 lb. of actual nitrogen per 1,000 square feet.

Nitrogen is readily absorbed by surface application since it is carried by water. Phosphorus and potassium are much more slowly absorbed. The system shown in Figure 4 is effective on slopes where fertilizer might be washed away before it could be absorbed by the soil. The fertilizer is placed in holes four to six inches deep. A bulb planter is a handy tool for digging the holes. The holes are dug two feet apart to within three feet of the trunk. By using two-foot spacings, there will be approximately 250 holes per 1,000 square feet. For fertilizing trees, the methods described above are preferable to the use of various fertilizer spikes, tablets, and hose end root applicators. Fertilizer should not be injected in tree trunks when it can be avoided. Injection holes often become infected with wood rots.

Figure 4. Drill or punch holes every two feet within the area to be fertilized. String or twine may be used to mark off the area. Place a hole in the center of each square. Stay three feet away from the trunk.

Because shrubs have a more limited root system, spread the described amount of fertilizer under the shrub and scratch it into the soil about 1/2 inch deep. Do not place fertilizers next to plant stems and do not cultivate azaleas. When growing azaleas and roses, start with a soil test. Specialty fertilizers are sold for maintaining azaleas and roses. Broadleaf evergreens, like azalea and magnolia, grow best in well-drained acid soils. To maintain an acid soil, use acid-type fertilizers and avoid materials such as lime, wood ashes, fresh manure, and bone meal.

Organic fertilizers may also be used around broadleaf evergreens. Nutrients in these materials are released slowly and do not cause excessive growth. Apply such organic fertilizers as cottonseed or soybean meal at five to six pounds per 100 square feet of planted area. Broadleaf evergreens are often benefited by applications of compost. Vines such as English ivy should be fertilized in the fall after frost. This will nourish the plants without excessive spring growth.

*Note: Do not add P and K unless shown to be deficient by soil analysis.

Before applying micronutrients such as iron, make sure the plants are not suffering from a nitrogen deficiency.

Magnolia: Apply one pound of Epsom salts (magnesium sulfate) for every 10 feet of branch spread and mulch with manure or compost and water thoroughly during any drought regardless of season. Products such as Ironite, containing trace elements and used as directed on the package, may prove beneficial.

Pin Oaks: Many plants suffer from iron chlorosis or deficiency. Iron deficiency shows by yellowing of the leaf blade while the leaf veins remain green even though fertilizers have been correctly applied. Iron deficiency shows first on the upper or new leaves. The same symptoms on lower leaves may indicate magnesium deficiency, too. Magnesium deficiency may also affect pin oak. Refer to the Magnolia section. Iron deficiency can be corrected during the early growing season by applying a commercial chelated iron product according to the package directions. It is often wise to also fertilize with nitrogen when treating for iron deficiency. The tree should be much greener within two to six weeks following treatment. If not, magnesium deficiency, soil acidity, and drainage could be improper, as these conditions often accompany chlorosis. Acidity and drainage (soil percolation) must be corrected when they are a part of the problem. Iron and magnesium applied in the fall may correct the deficiency, but the symptoms may persist until spring growth emerges.

Most pin oak problems are a result of poor adaptability to the site or climate. Pin oak and sweetgum become progressively less adapted west of a north/south line through Tulsa.

Micronutrients such as iron and magnesium may be applied in a foliar spray. This is usually done early in the season and early or late in the day. If the chemical dries too rapidly or is blown away, it is not effective. Foliar sprays should be coupled with soil application. Generally, foliar spray is for emergency treatment in Oklahoma and it is not a practical method for maintenance fertilizing.

Pines: In addition to nitrogen as previously discussed, apply a two- to four-inch layer of compost, forest floor litter, or rotted or composted animal manure from the dripline to the trunk in late October or November. Young pines may be treated annually. The manure may have been composted, but it is preferable that it has not been heat treated since the heat may kill beneficial organisms.

When applying fertilizers, be sure that the plants get adequate watering during the entire year.