The Ogallala aquifer, also known as the High Plains aquifer, is the primary source of water for many communities throughout the High Plains region. Stretching from South Dakota to Texas, the Ogallala aquifer is one of the largest aquifer systems in the U.S.  It underlies nearly 122 million acres of land, used primarily for agriculture, producing nearly one-fifth of the nation’s wheat, corn and cotton [3, 11]. Approximately 14 percent of the total aquifer area consists of irrigated acres capable of producing $7 billion in crop sales [1]. The Ogallala aquifer provides one-fourth of the total water supply used for agricultural production across the U.S. [3]

During the 1950s and 1960s, agriculture in the High Plains began to expand both in irrigation systems and irrigated acres [11]. The new irrigation systems provided a way to grow crops even during drought; however, larger and deeper wells were required to meet demands. The irrigation expansion and increased pumping resulted in considerable losses of water storage in parts of the Ogallala aquifer. As a result, Congress directed the U.S. Geological Survey to start monitoring water level changes in this critical groundwater resource, a mission that has continued. The data collected by USGS have yielded critical water-level information, specifically characterizing declines.

The most recent USGS publication estimates a drop in water level of about 15 feet, when averaged over the entire Ogallala area [6]. However, the change in water level is highly variable in different areas of the aquifer; no change or even water level rise was observed mainly in the northern area and significant declines measured in the southern High Plains (Figure 1). When comparing 2013 water levels to those measured in the 1950s, the maximum water rise was 85 feet at an observation well in Nebraska and the maximum water decline was 256 feet at a well in Texas.

The southern High Plains has an arid/semi-arid climate with rainfall amounts less than evaporation and far less than the water requirement of many agricultural crops. The Ogallala aquifer in this region has a very low recharge rate; resulting in very little precipitation reaching the groundwater. Water users in the southern High Plains have experienced significant declines in water levels, and consequently, increases in pumping costs. Areas like the Texas Panhandle and southwestern Kansas have created local districts to monitor water levels and help stakeholders sustain the groundwater supply. In Texas, Groundwater Conservation Districts are formed by people living in geographic areas where groundwater has declined. These GCDs regulate well spacing and pumping rates within their boundaries to ensure long-term groundwater protection and conservation [10].

The Ogallala aquifer is one of the major aquifers in Oklahoma, underlying the Panhandle and parts of the northwest regions. In the eastern part of the Oklahoma Panhandle, the Ogallala formation often sits directly on top of consolidated sediments, which are more than 250 million years old. In Cimarron and western Texas counties, a younger formation of shale and sandstone called the Dockum group overlies the redbed. Other formations, including the Dakota Sandstone and Morrison Formation, also are found in the Oklahoma Panhandle [4].

The Panhandle region has a semi-arid climate with the average annual rainfall of about 20 inches during the past 120 years (1895-2015). Drought is common in the area, with one out of every six years having received less than 16 inches of rainfall during the same 120-year period. The Ogallala aquifer supplies more than 98 percent of total water demand in the Oklahoma Panhandle and other sources (e.g. alluvial aquifers and streams) contribute less than 2 percent [9]. Alluvial aquifers, which are shallower and generally connected to surface water resources, are limited. Local rivers and creeks (mainly the Beaver River and the upper Cimarron River) can have periods of low to no flow and are unreliable as a major water supply. Optima Reservoir, the only major Panhandle reservoir, does not sustain water.

Irrigation is the largest use of water in the Panhandle. Based on 2007 crop mix data, there are approximately 230,000 acres of irrigated land in Cimarron, Texas and Beaver counties, requiring more than 290,000 acre-feet of water per year [9]. This is about 85 percent of the total water demand in the region and is expected to increase to about 306,000 acre-feet by 2060. The major irrigated crops are grain corn and wheat, accounting for about three-fourths of the total irrigated area. According to the USDA National Agricultural Statistics Service, the total harvested area of irrigated corn and wheat in 2012 was more than 106,000 and 65,000 acres, respectively. Grain sorghum ranked lower, with a total irrigated area of about 20,000 acres.

The expansion of irrigated agriculture in Oklahoma Panhandle has been a major driving force for economic development and prosperity of this region. However, this growth has come at the cost of declining non-renewable water resources. Figure 2 demonstrates the cumulative number of irrigation wells drilled in each of the four major Oklahoma counties overlying the Ogallala aquifer.

Figure 2. The cumulative number of irrigation wells drilled in each of the four major Oklahoma counties overlying the Ogallala aquifer.

Since the predevelopment period (prior to 1950), about 3,000 irrigation wells have been drilled into the Ogallala aquifer. The largest number of drilled wells (more than half) were in Texas County, followed by Cimarron, Beaver and Ellis counties. Hence, it is not surprising that the largest decline in groundwater has been experienced in Texas County. According to the Oklahoma Water Resources Board, water levels in the Ogallala aquifer have declined more than 70 feet in Texas County and more than 50 feet in Cimarron County since predevelopment. These large declines can be attributed to the high density of irrigation wells.

The highest rate of adding new wells occurred during the 1960s, with about 107 new wells being drilled every year in three counties of the Panhandle area. The period from 2010 to 2015 was characterized by a major drought in the region. During this five-year period, 226, 95 and 31 new irrigation wells were drilled in Texas, Cimarron and Beaver counties, respectively. The water level declines were more than 13 feet in Texas County, 9 feet in Cimarron County and 4 feet in Beaver County over the same period [8].

Figure 3. A closer look at the change in the Ogallala aquifer water level from predevelopment (1950s) to 2013. Data obtained from [6].

Irrigated agriculture in the Oklahoma Panhandle has changed significantly during the past several decades. Figure 4 depicts two satellite images taken in July of 1976 and July of 2009 over the city of Guymon and its surrounding area. Green squares are typically flood (gravity) irrigated fields, while green circles represent center pivot (sprinkler) irrigation. As it can be observed, the majority of irrigated fields were under flood irrigation in 1976, with only a few center-pivot systems present in the satellite image. During the next 33 years, most of irrigated fields switched to center-pivot systems. Compared to flood irrigation, center-pivot systems can apply water in smaller amounts and more uniform patterns, resulting in reduced deep percolation and improved crop yield. In addition, the new center pivot systems have nozzles at a lower elevation, which helps reduce direct evaporation and wind drift losses. 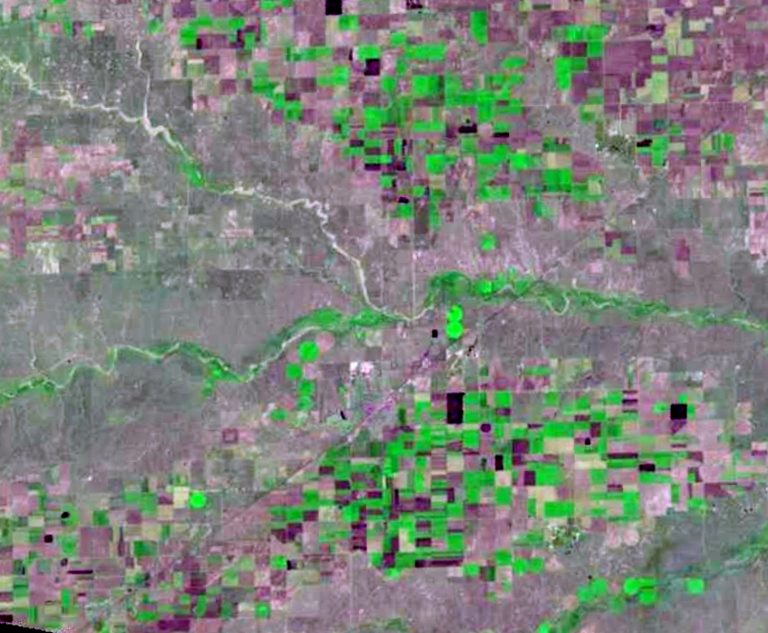 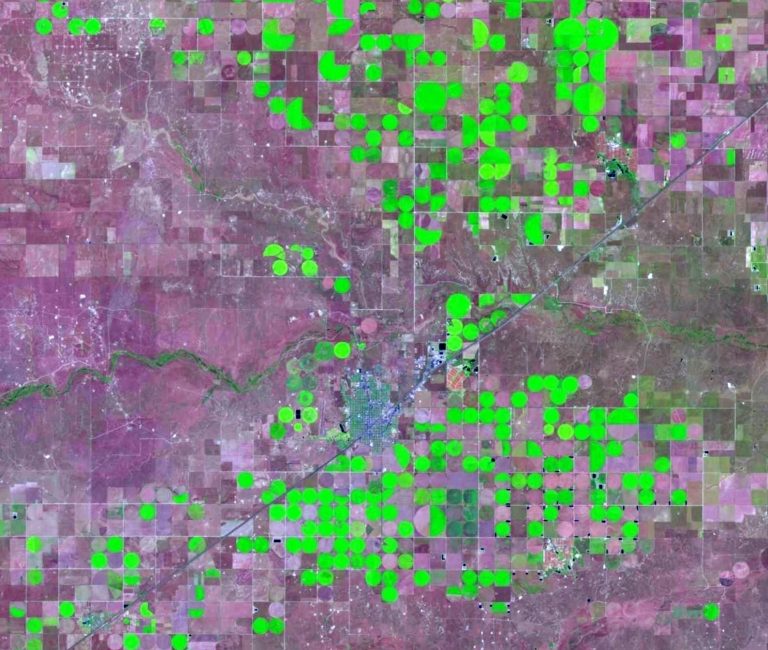 The decline in the Ogallal water level has created numerous challenges for irrigated agriculture in the Oklahoma Panhandle. A main challenge is the reductions in pumping rates, resulting in higher energy costs and decreased revenue, as crop yields are decreased due to not meeting the full crop water requirement or planting a smaller area. In addition, as the Ogallala level decline and water is being extracted from deeper parts of the aquifer the quality of water may degrade [2].

Since the Ogallala aquifer has a very low recharge rate [7] and other water resources are so scarce, efforts to increase the life of this valuable resource should focus on managing demand. This requires a close collaboration between stakeholders, state/federal agencies and universities. Local groups of stakeholders, such as the Oklahoma Panhandle Agriculture and Irrigation Association, have been active in this field. An example of their efforts is the development of the Panhandle Regional Water Plan in collaboration with other local groups.