The term “surface irrigation” refers to systems that deliver water to crops using a gravity-fed, overland flow of water. Surface irrigation conveyance and distribution systems are among the first engineering innovations of humans, dating back to more than 6,000 years ago. This Fact Sheet provides general information on key aspects of this historic technology that is still in use in many parts of the world.

The basin system consists of level, diked areas that receive undirected flow of water (Figure 1). Basins range widely in size from only a few square feet (orchard crops) to a few hundred square feet. The soil surface inside large basins may be corrugated to facilitate a more uniform water distribution. The dikes surrounding the basin should be stable enough and well-maintained to prevent breaching. However, it is always a good design practice to include spill structures in dikes in case heavy rainfalls and/or mistakes in irrigation cut-off time occurred. Due to their near-zero surface slope and closed boundaries, basin irrigation is appropriate for crops that can tolerate inundation.

Border irrigation is different than basin because the borders are rectangular in shape, have a sloping surface, and are not diked at the tail end (free drainage). Borders are appropriate for irrigating almost all crops, except those that require ponding conditions (e.g. rice). The inflow rate should be identified carefully as large enough to allow water front advancement, but not too large to erode the fertile top soil out of the field.

In furrow irrigation, the soil surface is channeled and furrows are formed to direct the flow and avoid flooding the entire field (Figures 2 and 3). Water moves in these furrows and seeps through their walls and bottom. Each furrow receives an inflow of water, which could be provided by means of hand-dug checks, gated pipes or siphons tubes. Furrow irrigation provides better control of water management, but it also has several disadvantages compared to basin and border irrigation. The first disadvantage is the increased risk of salt build-up on beds, where water does not reach. Secondly, a larger volume of surface runoff is generated in furrow systems. Finally, they are more labor-intensive because farm equipment needs to be moved among numerous furrows. 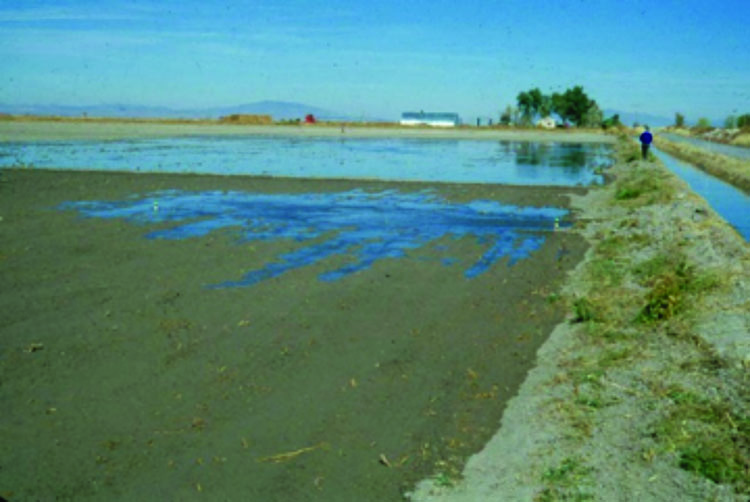 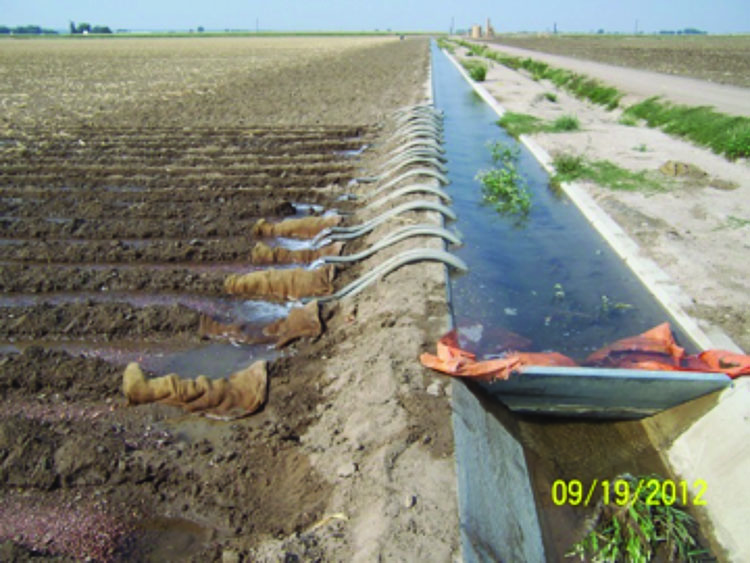 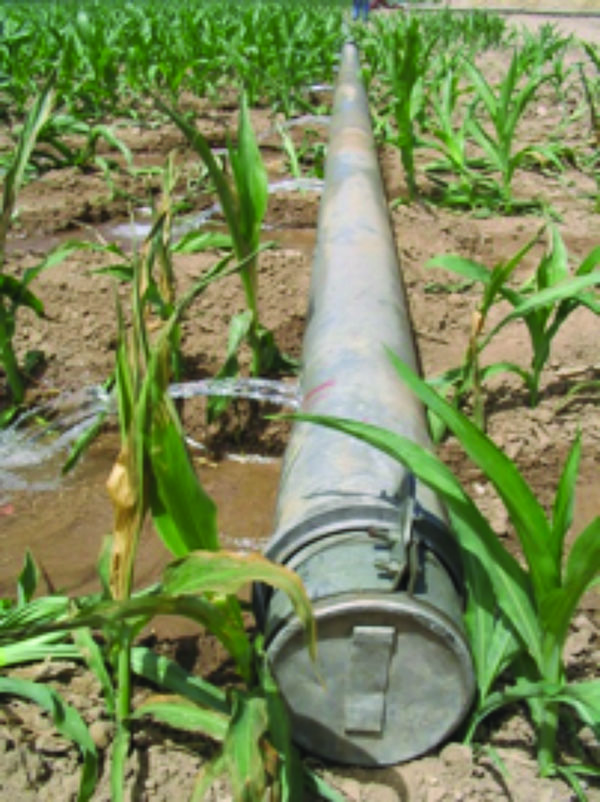 Compared to pressurized systems (sprinkler and drip), surface irrigation systems require smaller capital investment. The main capital expense is the cost of land grading, which is required in order to achieve a uniform distribution of water across the field. The maintenance costs are also usually less, as structures for control and for regulating water flow are made with inexpensive and readily-available material (plastic sheet, wood, brick, etc.). Another advantage of surface irrigation systems is that they are less sensitive to weather variables and water quality. For example, the efficiency of water application in sprinkler systems diminishes quickly under high wind conditions. Or in drip systems, low quality of irrigation water can result in emitter clogging and poor distribution uniformity.

A disadvantage of surface systems is the complexity of designing their components to achieve efficient water application. This is mainly due to the high variability of soil properties, which serves as the conduit for water transfer across the field. Another disadvantage is the high cost of labor required to operate the system. In addition to the starting and stopping of the flow — done manually — water advancement in the field needs to be closely monitored. Finally, surface systems are usually less efficient. This topic is discussed in more detail in the next section.

Surface irrigation systems are believed to have low efficiencies, averaging about 60 percent. This means that only 60 percent of the delivered water is stored in the top layer of the soil, where crop roots can extract it for beneficial use. The remaining 40 percent escapes the field through deep percolation below the root zone or through surface runoff at the tail end of the field. However, the efficiency can be increased significantly by implementing a precise land grading, regulating the inflow, optimizing irrigation timing, and reuse of surface runoff. For example, efficiencies as high as 92 percent were reported for furrow irrigation systems in a cotton production area in eastern Australia (average furrow length of 2,300 feet and spacing of 40 inches). Higher efficiency rates will not only help producers to save on labor and conveyance costs, but will also reduce the load of salts, sediments, and nutrients leaving the field (Figure 4).

Although improving irrigation efficiency has several benefits, it should be noted that the “lost” portion of water at one field is usually a source of water for another user somewhere downstream. As a result, increasing efficiency by reducing return flows (deep percolation and surface runoff) may negatively affect downstream users. That is why capturing surface runoff and reusing it at the same field is not allowed by the water law in several western States. 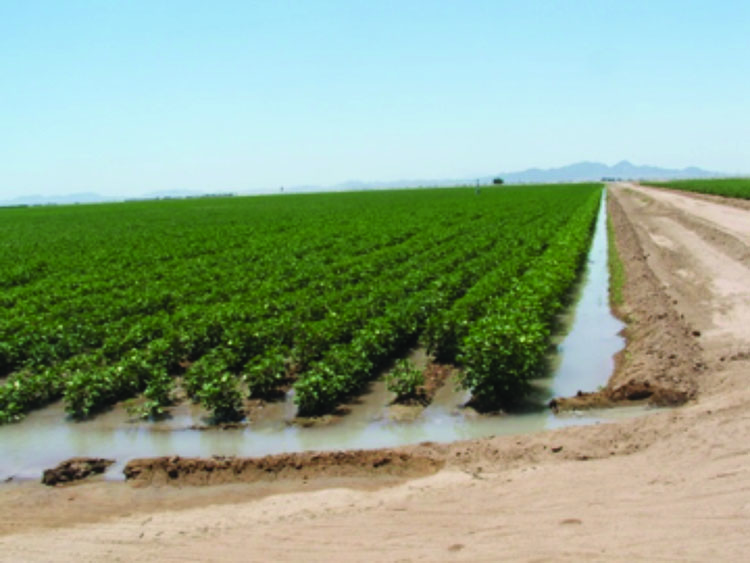 If a field does not have the above characteristics, a large portion of applied water will escape the field, even if advanced technologies for controlling water management are implemented. Once these requirements are met, several available technologies can be adopted to improve water application efficiency at the field level. The next section provides a brief introduction to these technologies, ranging from simple to more complex options.

A significant portion of water is lost in the water delivery network and head ditches before it reaches the field. Earthen canals and ditches lose large amounts of water due to seepage. Use of concrete and/or plastic lining can reduce the seepage. Using low-pressure aluminum and/or PVC pipes not only eliminates seepage, but also minimizes evaporation losses.

Knowing the irrigation requirement is a key to improving efficiency. Applying water in excess of what can be stored in the root zone or what can be extracted by the crop at a given growth stage and weather conditions leads to wasted time, money, and nutrients, not to mention the adverse effects on soil salinization and weed growth. But in areas where irrigation water and/or soil are high in salinity, irrigation depth should be increased in proportion to the salinity level to leach the salts below the root zone and maintain a more favorable condition for water extraction by crop roots.

A major challenge in surface irrigation is to balance the trade-off between deep percolation and surface runoff. Deep percolation can be reduced by increasing the inflow to the highest levels that do not result in soil erosion. This reduces the infiltration at the head end of the field, but increases the runoff at the tail end at the same time. In contrast, applying a small inflow would reduce the volume of runoff, but increases the deep percolation at the head end (Figure 5).

A hybrid solution is to start with a large non-erosive flow to push water down the field, and then reduce the inflow once the water front reaches the tail end. This approach, known as cutback, can be achieved by adjusting the water delivery equipment. In case of furrow irrigation with siphons, for example, two or three siphons can be used during water advancement. The extra siphons can be removed once the water reaches the tail end, leaving only one siphon in the furrow to supply a reduced stream.

Figure 5. The trade-off between deep percolation and surface runoff.

Actual field measurements indicate the runoff from furrows could account for a large portion of the water turned in at the head of the furrow. During the past several years, many irrigators have constructed reuse pits to capture this runoff. Basically, one of two concepts can be followed relative to the utilization of the captured runoff. First, the water can be collected and stored until there is a sufficient amount to irrigate the same field (by pumping back to the head ditch) or another area. Second, runoff water can be added to the regular water supply and used for irrigation of the same or following sets. The choice of concept to follow will be dictated by the cropping system, available irrigable land, and amount of runoff water involved.

Some general rules of thumb regarding runoff reuse systems are:

Surge flow irrigation is an innovative advancement in surface irrigation management that was developed more than three decades ago at Utah State University. With this regime, water is applied in pulses (on/off cycles), as opposed to applying a continuous flow. Applying intermittent pulses reduces the water infiltration rate into the soil and allows for faster movement of water down the field. Pulses of water can be applied using gated pipes with solar/battery powered valves and controllers. The valve alternates the flow between two sets of irrigation, directing it to one set for a period of time (usually one to three hours) and then switching it to another set for the same period. During this time, the first set is dewatered, the sediments are settled, and the infiltration rate is reduced. The cycles are repeated until the water reaches the tail end of the field, when a cutback continuous or surge flow could be maintained to fill the root zone. With surge flow, water reaches the tail end at approximately the same time as continuous flow, but with only 50 percent to 60 percent of volume applied in continuous flow. Previous field research in Colorado, Oregon and Washington has demonstrated surge flow regime results in higher uniformity/efficiency and lower nitrogen loss and fertilizer cost. Surge flow irrigation is also advantageous when light and frequent irrigation's are required, such as during the early season for main agricultural crops or during the entire season for vegetables.