Solarization is a non-chemical method for controlling soilborne diseases, insects, nematodes and weeds in soil prior to planting crops. Crown and root rots, and wilts caused by certain plant pathogenic fungi and nematodes, or complexes of these pathogens, often are limiting factors in production of crops. Crop rotation or selection of new sites is can be effective for preventing soilborne disease or weed problems. However, where susceptible crops are repeatedly planted, soilborne disease problems often develop. Historically, soil fumigation was used to control soilborne diseases, insect pests and weeds in the production of high value crops. However, soil fumigation is hazardous and few fumigants are registered for use in commercial crop production. Fumigants have not been registered for use in residential gardens for many years. Soil solarization is a safer alternative to fumigation for controlling soilborne problems. It can easily be applied on both large and small scales and thus is suitable for both commercial and residential use.

Soil solarization captures the radiant energy of sunlight under clear polyethylene film. When soil moisture is adequate, the heat produced pasteurizes the soil, killing plant pathogens and insect and weed pests, but leaving intact populations of many beneficial soil microorganisms that promote plant growth. In desert environments, soil temperatures in the top 6 inches of soil reach 140 F. The effect of solarization is greatest at the surface and decreases with depth. However, under optimal conditions, heating is sufficient in the top 12 inches of soil to be effective against a wide range of pathogens and pests. In Oklahoma, temperatures ranging from highs of 126 F at 1-inch and 98 F at 12-inch depths were recorded in research plots in Stillwater and Bixby during September 1982. Verticillium dahliae, a fungal plant pathogen that causes wilt on a variety of plants, was controlled in these plots. In California and in other countries, solarization for four to six weeks during the hottest period of the year is reported to be effective against soilborne diseases such as Fusarium wilt, Phytophthora blight, bacterial canker, crown gall, southern blight and potato scab. Soil solarization can be used to control nematodes, however, results may be variable because nematodes are mobile and can move to greater depths to escape lethal temperatures. Soil solarization controls many annual weed species, but may not be highly effective on purple and yellow nutsedges, and on perennial weeds such as field bindweed.

Solarization can be applied to entire areas (gardens) or to linear rows (beds) that will be cropped using plasticulture techniques.  Shady areas should be avoided because temperatures likely will not reach lethal levels. The area to be treated should be well tilled and free of clods and crop debris. Tillage is best applied with a rototiller, but hand spading and raking are also effective.  Because wet soil conducts heat better than dry soil, the soil should be thoroughly watered to a depth of 12 inches.  This can be done before or after the film is applied.  Soaker hose or drip irrigation, installed under the film, can be used to irrigate the soil after application of the film is complete.  Water then can be added if needed during the solarization period.

Clear polyethylene film of various thicknesses (0.5 to 4 ml) should be used.  These can be obtained from home improvement stores, hardware stores, garden centers, or in bulk rolls from agricultural suppliers.  Agricultural films for commercial application are often treated with ultraviolet (UV) inhibitors to delay film breakdown.  Colored films should not be used for solarization because they do not transmit solar radiation, but rather reflect or absorb it, thus diminishing soil heating.  Thinner (0.5 to 1 mil) films conduct more heat, but are more susceptible to tearing and have a shorter life than thicker films. The film should be applied as tightly as possible to the soils surface to minimize air gaps and potential damage from wind.  The film should be firmly anchored by burying the edges in trenches dug by hand when treating gardens and small plots (Figure 1), or during bed shaping and film application when using plasticulture.  In the treatment of linear rows (beds) using plasticulture, beds are formed and the film and drip tape are applied simultaneously (Figure 2).

Figure 1. Prepared soil covered with clear plastic (polyethylene) sheet for solarizing a garden-sized plot. Note that edges are buried in soil to secure the sheet and a drip hose has been installed underneath for application of additional moisture. 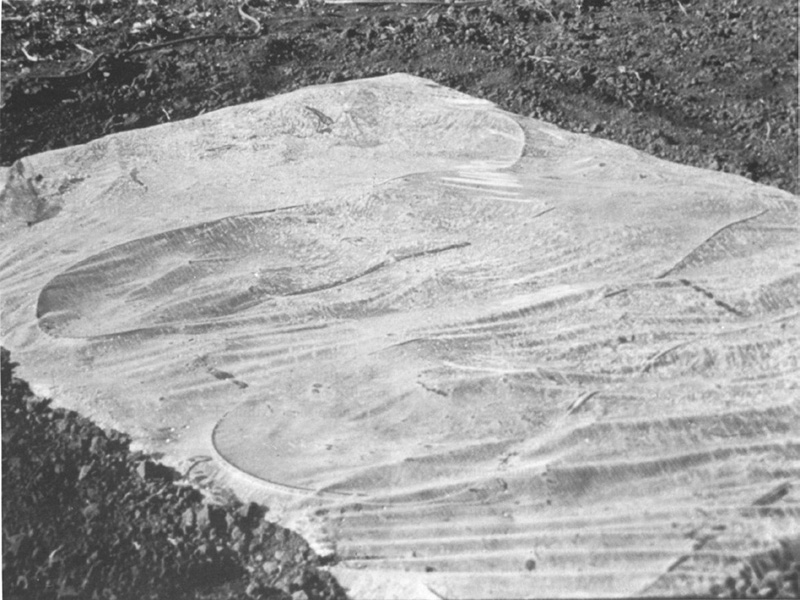 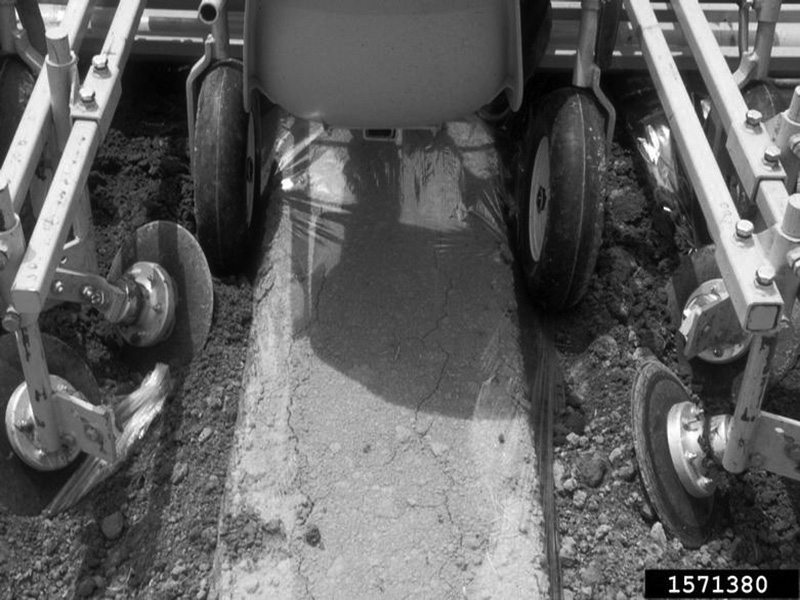 The solarization period should be from four to six weeks during the hottest part of the year.  The recommended time for treatment in Oklahoma is from July to early September. The longer the soil is exposed to the heat generated by the solarization process, the greater the kill of undesirable organisms will be.  Be sure to restrict the movement of pets across the polyethylene film.  Dogs especially will leave holes in the film and allow heat to dissipate from beneath the film.  Periodically inspect the film and repair any tears with tape.  Add water, if needed, during the treatment period without disturbing the film.

The film can be removed and planted immediately into a fall crop or garden.  Alternatively, clear plastic may be painted white or silver to cool the soil and repel insect pests.  Holes are then punched in the plastic allowing direct seeding and transplanting into the plastic that then serves as row mulch. However, thin film may degrade and fall apart during the growing season.  Alternatively, the film may be left in place until planting the following spring. The plastic should be regularly inspected so that it can be removed prior to its breaking down to the point where it is difficult to remove.  Care should be taken to avoid excessive disturbance of treated soil after solarization and before planting.  Solarized soil may become re-infested with diseases and weed seeds if contaminated soil is mixed with treated soil by tillage or inadvertently moved into the treated area.

A guide on planning and establishing a garden.