The production of animal wastes and their subsequent use as fertilizers and soil amendments will increase as confined poultry and livestock producers expand their market in the meat industry.  Animal waste products contain valuable nutrients that are required by forage crops.  These nutrients, primarily nitrogen (N), phosphorus (P), and potassium (K), can accumulate on sites with continued application.  Forages managed as hay crops can be utilized to remove these nutrients via plant uptake from sites that regularly receive poultry litter, swine lagoon effluent, dairy, and feedlot manure applications.  This OSU Extension Fact Sheet discusses the use of forages for nutrient removal from areas subject to manure applications.

Poultry litter is made up largely of poultry manure and bedding materials such as sawdust, wood chips, or rice hulls.  The nutrient composition of poultry litter is highly variable, but the average analysis for N-P2O5-K2O per ton of litter is approximately 60-60-50 (Table 1).  Poultry litter is generally applied to pastures, either on-farm or within a short distance of the poultry operation.  Nutrient accumulation or loading of elements such as P can occur in a few years, even on P-deficient soils, if manure is applied regularly. In fact, some fields already have a soil test P (STP) index over 400, and P application from animal manure is limited in Oklahoma.

Table 1. Average nutrient composition of litter from over 300 samples in Delaware County.

Use of swine lagoon effluent may cause nutrients to accumulate on a site in a similar manner.  Analyses for lagoon effluent are usually given in the pounds of nutrients per 1,000 gallons.  The ratio of total N to P2O5 to K2O for swine lagoon effluent generally falls into the ratio of 4-1-5.  Actual nutrient concentrations depend on the amount of flushwater added to the lagoon, the amount of precipitation falling on the lagoon, and the level of treatment achieved by the lagoon.  Using a typical analysis of 4 lbs. N, 1 pound P2O5, and 5 pounds K2O per 1,000 gallons indicates that 1 acre-inch of irrigation yields approximately 108 pounds N, 27 pounds P2O5, and 135 pounds K2O per acre.  The amount of plant available N is generally lower than the total N applied due to ammonia (NH3) volatilization during and after application.

Animal manure applications should be managed to prevent excess nutrient loading of sites from repeated applications.  The preferred management strategy is to not apply more nutrients than can be effectively used by the forage system.  Under most circumstances the critical nutrient to monitor will be P.  Phosphorus is required in lower quantities by forage plants than either N or K; thus, P is removed in the least quantity by the forage system.  If possible, animal manure should only be applied to meet the P requirement of the forage system.  Additional N or K should be applied as commercial fertilizer.

If animal manure is applied to meet the N requirement of the forage crop, excess P will accumulate. A long-term research experiment conducted at the OSU Agricultural Experiment Station at Lahoma documents the effect of soil-P depletion and enrichment from 27 years of annually applying 0 to 80 pounds per acre fertilizer P for winter wheat production.  The soil test P index is well correlated with net P input (P applied minus P removed).  About 14 pounds P2O5 per acre is required to raise or lower the soil test P by 1.0 unit for this silt loam soil.  Generally, it requires 10 to 20 pounds P2O5 per acre to raise soil test P by 1 for a wide variety of soils.  For example, soil test P would increase by 12 to 24 per year if 4 tons of litter were applied annually.  Routine analyses of animal manure will provide information regarding the level of nutrient inputs the system is receiving.  An annual soil test of the application site will indicate the soil phosphorus status and whether an accumulation is taking place.

An important management strategy on sites where nutrient loading is an existing or potential problem is to use a forage crop(s) that removes a maximum level of nutrients, especially the nutrients of concern.  Following are a couple of ways to accomplish this.

The first method involves using a forage crop that has a high dry matter yield potential.  As dry matter yield increases, the amount of nutrients taken up by the crop increases, and thus, more nutrients can be removed.  Bermudagrass is an example of a forage crop that has a high yield characteristic.  When grown in eastern Oklahoma with adequate precipitation, or under irrigation elsewhere in the state, bermudagrass is one of the most productive forage grasses for use in a forage system designed for nutrient removal.

Another forage-use strategy involves using forages that have higher nutrient uptake for specific nutrients even though dry matter yield may be less than some other forage crops.  Table 2 shows differences between forage species in percentage concentrations of various nutrients contained in plant tissue.  Orchardgrass, for example, does not yield as much dry matter as bermudagrass, but its uptake of P is almost twice that of bermudagrass.  Concentrations of nutrients in different species can vary depending on plant available nutrients in the soil, yield, and maturity of the forage when cut.

Alfalfa has both a high yield potential, if given adequate moisture, and a higher P and K requirement than that of bermudagrass.  Although a legume is not dependent on applied N, alfalfa receiving N, P, and K as swine lagoon effluent has the potential to remove a large quantity of applied nutrients.

The most efficient nutrient removal forage system will use a combination of both warm- and cool-season forage species to enhance nutrient removal on a year-round basis.  A good combination in the eastern third of Oklahoma is tall fescue, a cool-season perennial, with bermudagrass, a warm-season perennial.  Farther west, where tall fescue is not adapted, a good combination would be bermudagrass overseeded with a cereal grain such as wheat or rye and ryegrass.  Tall fescue pastures could be overseeded with a warm-season annual grass such as crabgrass for summer growth.  Likewise, the use of orchardgrass, bromegrass, or wheatgrass (tall or intermediate) with crabgrass would be a good choice for use under irrigation in the western portion of the state. Lately, triticale has been widely used as hay and nutrient remover.

Warm- and cool-season annuals could also be used for high levels of nutrient removal.  Possible species combinations could include double cropping cereal grains with sudangrass, forage sorghums, or pearlmillet under irrigation.  They can produce large quantities of dry matter and remove high levels of nutrients from sites receiving swine lagoon effluent applications.  The negative effects of nitrate accumulation associated with the use of these warm-season annual grasses during times of drought stress would be reduced since adequate moisture should be available under irrigation.

It should be noted that nutrients are not effectively removed from the forage system by grazing livestock.  Table 3 compares the various levels of nutrient removal by grazing or by haying warm- or cool-season perennial grasses.

1 Assumes 1-500 lb. calf weaned off of 1 acre on a year-round basis.  If more than 1 acre per year is required to produce the calf, the values would be reduced.

Nutrient removal is accomplished only by removing forage as a hay crop and transporting the nutrients away from the application site.  Grazing, for the most part, recycles most of the nutrients back into the forage system.  Continued use of poultry litter or swine lagoon effluent under grazed-only systems will lead to increased nutrient accumulation at that site.

Some fields have already built up high P levels in the soil due to continuous poultry litter application.  New regulations set a soil test P limit for additional manure application.  For example, under current Natural Resource Conservation Service nutrient management guidelines, no animal manure can be land applied if soil test P is over 400 in Oklahoma, or over 300 in a nutrient limited watershed.  Therefore, some efforts have been made to reduce P in those fields with high yielding forage crops and/or legumes.  However, it may take a long time to see a significant soil phosphorus reduction.  Figure 1 illustrates the time needed to reduce soil test P by 100 at different forage yields. It takes about 22 years to reduce soil test P by 100 if 5 tons of bermudagrass is removed from the field every year. Therefore, it is a slow process to use forages for lowering the soil phosphorus level. 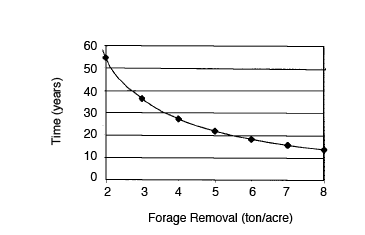 Animal manure contains valuable nutrients and organic matter that can and should be used as a source of plant nutrients and soil amendments in forage production systems.  However, continued applications of critical nutrients such as P, in excess of the level that can be effectively removed by the forage system as a hay crop can lead to an accumulation of nutrients.  Additionally, on sandy sites, relatively mobile nutrients, such as N, can be leached through the soil profile into groundwater in the underlying aquifers, thus posing a potential environmental hazard.

Forages with a high yield potential can be used effectively to remove nutrients from application sites, if application rates are kept within reasonable extents.  Bermudagrass and certain warm-season annual grasses have the potential to produce large dry matter yields and thus remove large quantities of applied nutrients.  Cool-season grasses and certain legumes have a higher uptake of certain nutrients (such as P) and may remove more specific nutrients than higher yielding forage species, although the yield potential is not as high.  Producers should seek to use a combination of both warm- and cool-season forages in a production system that attempts to remove a maximum level of nutrients from sites that regularly receive poultry litter or other types of animal manure applications. However, it is a slow process to use forages for lowering the soil phosphorus level.  Grazed-only systems will not effectively remove nutrients from an application site since most of the applied nutrients, especially P and K, are recycled to the land during the grazing process.

An explanation on the genetic differences in forage yield and quality among commercially available crabgrass varieties grown in Oklahoma.