Composite panels from wood and other lignocellulosic raw materials are manufactured for structural and non-structural applications, which include furniture and cabinet manufacture. When the composite panels are used as substrate for thin overlays, their surface characteristics play an important role to have a high-quality final product. This fact sheet summarizes basic manufacturing steps and some properties of three-layer sandwich type of panels made from particles of Eastern redcedar (Juniperus virginiana L.) and commercially manufactured Southern pine (Pinus echinata) fibers.

Eastern redcedar (Juniperus virginiana L.) is one of the widely distributed indigenous conifers in Oklahoma. More than 7 million acres in Oklahoma are infested with redcedar, primarily in the Eastern part of the state creating a significant ecological problem. In the manufacturing process of fiber-based composite products such as fiberboard, wood is broken down to its individual fibers, then reformed into a panel, using an interior adhesive usually urea formaldehyde under pressure and temperature around 5.2 MPa and 160 degrees Celsius, respectively.

Medium-density fiberboard, having an average density ranging from 0.70 g/cm3 to 0.80 g/cm3, is one of the main panel products widely used as substrate for thin overlay due  to its very smooth surface and uniform density distribution across the panel. However, its overall production cost is higher than that of a typical particleboard. Manufactured experimental panels, having fiber on the surface layers and particles in the core layer of three-layer panels, would have potential not only to reduce overall production cost but also produce panels with smooth surface for ideal overlaying applications.

Commercially manufactured Eastern redcedar particles and Southern pine fibers were purchased from local suppliers and dried to 4 percent moisture content in a laboratory oven. Dried particles were classified on 20 mesh screen until they became uniform in length around 2 to 3 mm. This process also removed oversize particles, bark and dust. Eastern redcedar particles were used for the core layer while the Southern pine fibers were used for the face layers of three-layer panels. Based on oven dry particle weight, 9 percent urea formaldehyde resin was applied to the furnish using a spray gun. Particles for core and fibers for face layers were blended with urea-formaldehyde resin separately for each panel by using rotating drum type mixer. Figure 1 shows the cross section of three-layer panel. 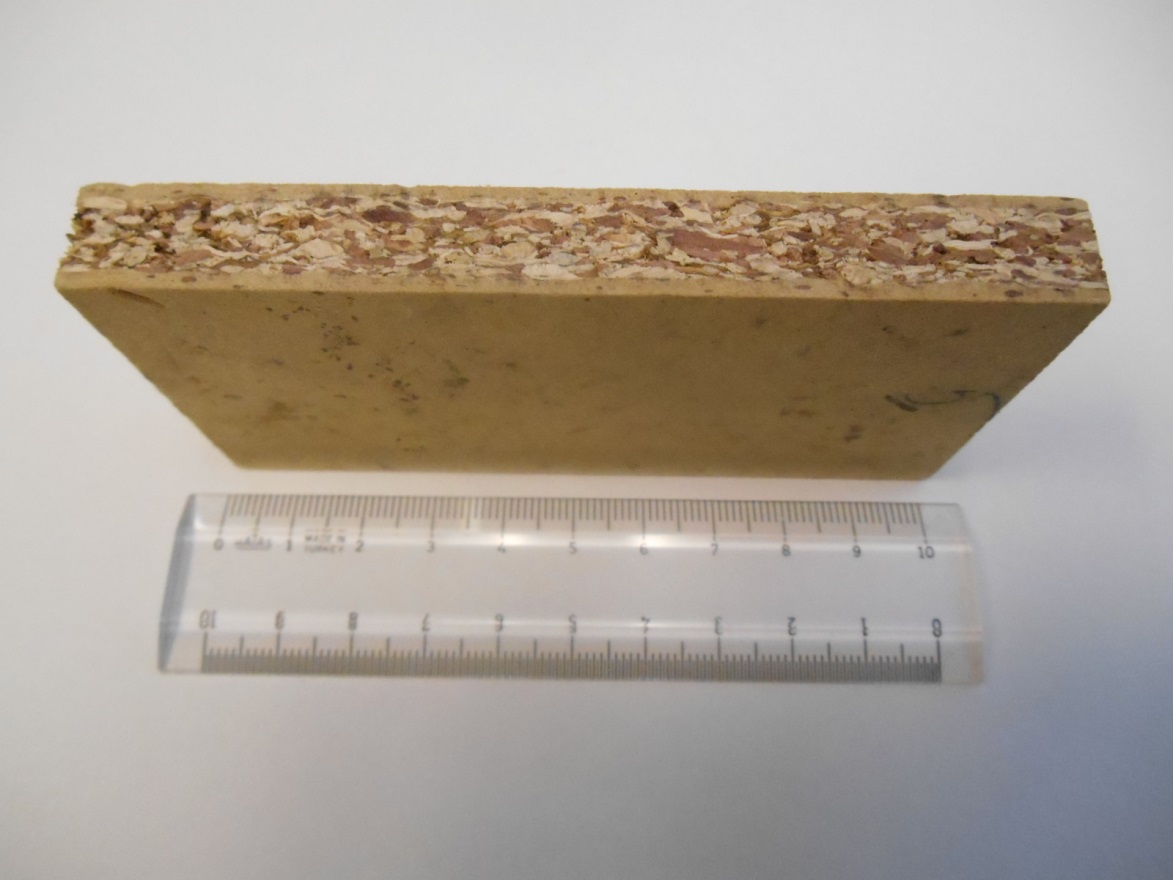 The ratio of the face thickness to the total thickness of a panel, known as the shelling ratio, was 0.30 for all specimens. Hand-formed mats were pressed in a computer controlled press at a temperature of 180 degrees Celsius and a pressure of 5.5 MPa for 5 minutes to a target density of 0.80 g/cm3. Test samples were prepared based on ASTM D-1037 standard and conditioned for about 2 weeks at 65 percent relative humidity and at a temperature of 20 degrees Celsius prior to tests. Physical and mechanical properties including modulus of elasticity (MOE), modulus of rupture (MOR), internal bond strength (IB), surface roughness of the specimens were determined. Thickness swelling of the samples were also tested by soaking them in water for 2 and 24 hours.

Currently, there are no standard methods to evaluate surface roughness of wood composites. However, the stylus method is a well-accepted in the metal and plastic industries due to its accuracy and ability to provide well-defined numerical values for the surface measured. Therefore, surface characteristics of the samples were determined by employing a fine stylus profilometer Hommel T-500 unit, which has TkE model pick-up equipped with a skid-type diamond stylus having 5-µm tip radius and a 90-degree tip angle. Average roughness, (Ra), mean peak-to-valley height (Rz) and maximum peak height value (Rmax) were determined on 5 samples for evaluation of the surfaces. Detailed specifications for these parameters are discussed in literature.

a Numbers in parentheses are standard deviation values.

b Italic numbers are average density values of the test samples in g/cm3.

Table 1 displays the results of both mechanical and physical tests for the panels Average MOE and MOR values of the samples were 4189 and 38 MPa, respectively. This study concluded that higher bending strength values of experimental panels can be directly related to high panel density.

Ninety percent of internal bond strength (IB) samples failed in their core layer. Average IB strength of the specimens was 1.21 MPa with a standard deviation value of 0.22 representing a constant distribution of IB values throughout the test group.

Wood composite products bonded with urea formaldehyde resin are not water resistant, therefore high thickness swelling properties of the samples are inevitable. Average thickness swelling values of 25 percent and 34 percent were found as a result of 2 and 24 hour water soaking tests, respectively. Although no wax or other additives were used in the panels, none of the samples crumbled and there was no separation between particles even after drying the specimens at room temperature for approximately two weeks following the water soaking.

Based on the measurements employing a stylus type of equipment, samples resulted in relatively smooth panel surface with average values of 4.81 µm, 32.91 µm and 42.45 µm for Ra, Rz and Rmax, respectively. Having fibers on the surface of the panels can be considered as an important advantage when they are used as substrate for thin overlays. If the specimens were sanded with a sequence of 120-150-180 grits sandpaper similar to commercial particleboard manufacturing, their surface roughness would have been much smoother. Results of this study indicate that such experimental panels can be used as substrate without having any substantial problems for overlaying process using resin-impregnated thin decorative papers.

This study investigated some of the basic properties of sandwich-type experimental panels manufactured from Eastern redcedar and Southern pine. Both mechanical and physical properties of the samples were determined as comparable to those of commercially manufactured panels. These results suggest that underutilized species such as Eastern redcedar may have the potential to be used in manufacture such composite panels. This process would provide an economic incentive to convert a costly land-management problem into value-added products of composite panels.