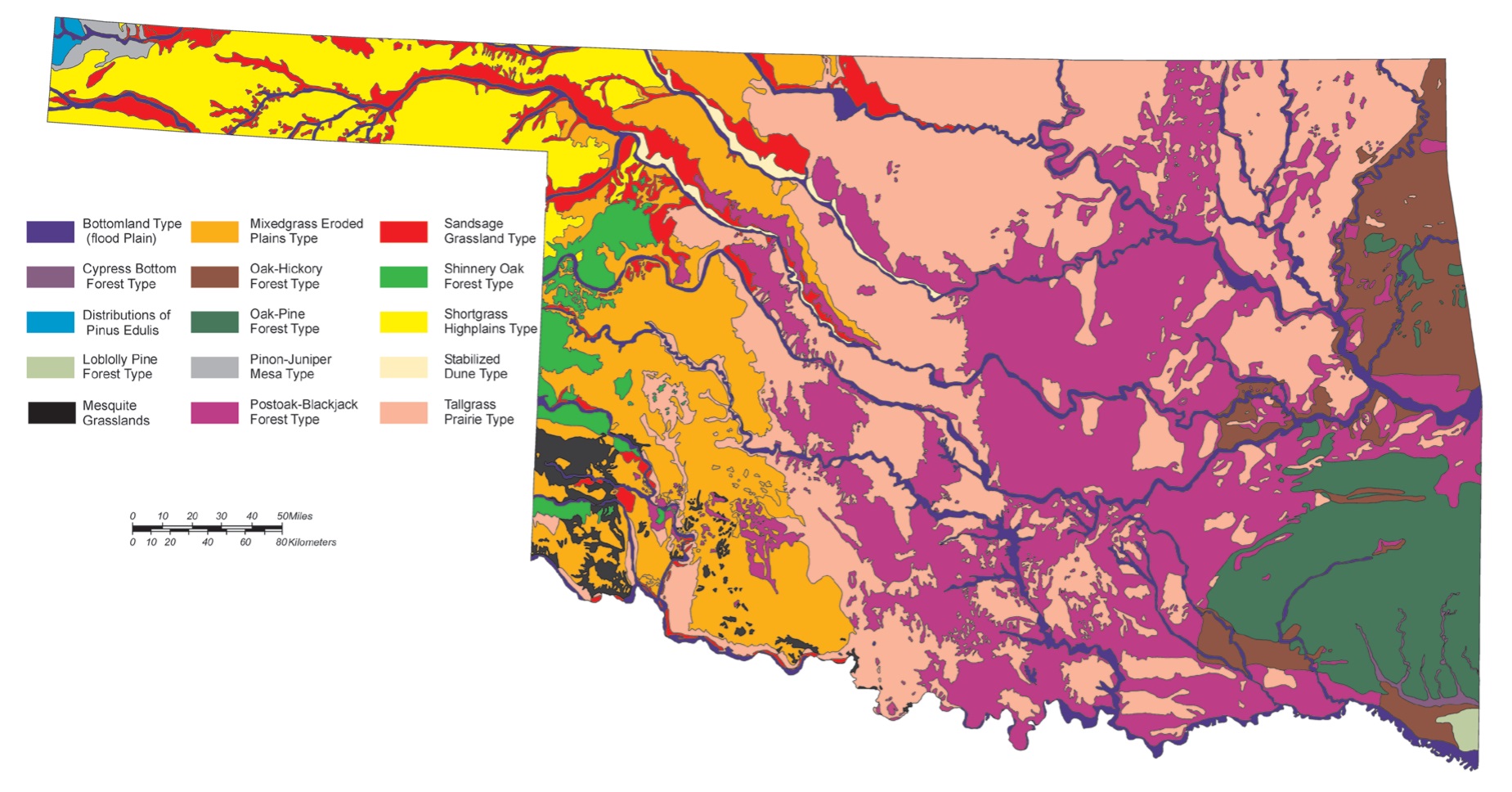 Major ecological drivers in sand sagebrush rangelands are weather/climate and the interaction of fire and grazing. Some research has concluded that weather can be a stronger driver of plant communities than most range management activities. Yet, fire and grazing and their interaction are very important and are within the control of land managers while weather is not.

By the 1950s, research and range management began to focus their efforts of improving livestock production on the sand sagebrush rangelands.   The prevailing thought was that removing sagebrush would increase economic return from livestock production. Historically, range managers attempted mowing, railing and burning to reduce sand sagebrush but had little success as the plant rapidly resprouts following disturbances. With the availability of 2,4-D managers found a tool that could effectively and easily remove sand sagebrush from large acreages. The U.S. Department of Agriculture’s Southern Plains Range Research station developed sagebrush control strategies, which culminated in the use of fixed wing aircraft to apply 2,4-D to thousands of acres. This practice is still in use 50 years after its development.

Historically, fire has been important in structuring and maintaining sand sagebrush communities.  Prior to European settlement, it is believed Native Americans were responsible for most fires within sand sagebrush rangelands.  Research has indicated that sand sagebrush returns to pre-burn conditions within three to four years5. Fire can also influence grazing distribution on the landscape as ungulates are attracted to freshly burned areas.  Historically, the dominant herbivore was bison, but domestic cattle behave similarly because they are also attracted to freshly burned areas.  The concentration of herbivores on these freshly burned areas allows unburned areas to receive little grazing pressure allowing for accumulation of grasses and shrubs.  Thus, fire and grazing interacted historically creating a shifting mosaic across the landscape which resulted in a variable plant composition and structure across sand sagebrush rangelands.  Landowners can mimic this system today by rotationally burning portions of pastures.  Increased diversity leads to more stable plant communities for livestock grazing, wildlife habitat, and other ecological services6.   Additionally, periodic fires are important to restrict the encroachment of trees, particularly redcedar, into sand sagebrush rangelands. Currently many of the ecological problems facing sand sagebrush rangelands could be resolved with the reintroduction of fire.

Unfortunately, fire has been infrequently used in most sand sagebrush rangelands in recent years and trees have begun to encroach.  Culturally there are several reasons people have opposed fire. It is commonly thought that fire leads to loss of forage, soil erosion, and poses a threat to structures and livestock.  Research has addressed these concerns by illustrating the forage quality can be enhanced, soil loss is minimal, and if fire is properly managed, it can be carried out safely.  It is important to remember that fire is an ecological process that is essential to maintaining sand sagebrush rangelands.

Domestic livestock grazing has occurred on sand sagebrush rangelands since the late 1800s. Sand sagebrush rangeland commonly supports stocker and cow calf operations. Livestock grazing in the late 1800s and 1900s was unmanaged and led to degraded rangelands. In the 1940s researchers at the Southern Plains Range Research Station began some of the earliest work on establishing stocking rates to ensure proper grazing of sagebrush rangelands.  In a 20-year comparison of three different stocking rates researchers suggested moderate stocking rates of 43 to 53 animal unit days per acre (AUD∙acre-1) or 9 to 11 acres per stocker (~600 lbs stockers) for a 320 day grazing period7.  The recommendations are similar for cow calf pairs with stocking rates of 45 to 60 AUD∙acre-1 or 15 to 20 acres per cow per year8.  However, supplementation is often needed during dormant season grazing as these rangelands are dominated by warm season forage.  Specifically, research has shown that cows need 2 lbs of 40 percent crude protein supplement daily9 while stocker cattle need 0.64 lbs per day of 40 percent CP supplement for adequate gains during the dormant season10.

Drought is a frequent event in the southern Great Plains.  Therefore managers should have the expectation that drought will occur. The best management for drought is properly managing livestock before the drought begins.  By using light or moderate stocking rates, managers can hold some grass back for dry years.  If managers employ higher stocking rates, there are few options other than supplemental feeding during drought or destocking.  Research in Harper County, Oklahoma found that it was more profitable to graze at moderate stocking rates rather than heavy, because financial losses during drought years on heavily stocked rangelands was much greater.8  In 2011, parts of western Oklahoma had less than 2 inches of rain through the growing season. Managers with heavily stocked ranges faced devastating economic losses that were exacerbated by increased supplementation costs due to the regional impacts of the drought. This also leads to loss of all vegetative cover that leads to a loss of wildlife habitat for species that require shrub cover.

The use of chemical herbicides to control sand sagebrush was developed at the Southern Plains Range Research Station in Woodward, Oklahoma in the late 1940s1. Chemical control of sand sagebrush has dramatically impacted the sand sagebrush rangelands, because it allowed land managers a simple cost effective way to control sagebrush on thousands of acres of rangeland.  Results of early research suggested that sagebrush should be sprayed from April 15th to June 1st at a rate of 1 lbs per acre1.  This rate and timing will give 50-80 percent control of sand sagebrush.    Application of 2,4-D has been effective with ground applications (boom sprayers) and aerial spraying.  Since 2,4-D is a broad spectrum herbicide it also will suppress forbs.

Mechanical treatment of sand sagebrush was also developed at the Southern Plains Range Research Station.  Early experiments (unpublished studies) remain as the only data available on the effectiveness of mowing sand sagebrush.  Research suggested double mowing sand sagebrush in the early spring when carbohydrate reserves were at their lowest would result in the best control8.  These results showed that mowing could increase grass abundance, and in turn, allow managers to increase stocking rates. However, they concluded that mowing in the late 1940s was too costly and impractical for treating large acreages of sand sagebrush rangeland. These conclusions likely are more relevant in today’s economy.

Sand sagebrush rangelands support and abundance and diversity of wildlife.  Some of the most notable game species include white-tailed deer, wild turkey, northern bobwhite, and lesser prairie-chickens.  White-tailed deer and wild turkey are habitat generalists and can adapt to a wide variety of habitat conditions and are not dependent on sand sagebrush, but it does provide habitat. Conversely, northern bobwhite and lesser prairie-chickens have more specific habitat requirements and their populations have been in a state of decline for the last several decades. The declines have been attributed in part to the loss of shrubs. Shrubs such as sand sagebrush, sand plum, and sumac are necessary for northern bobwhite to occur on a landscape and appear to be important to lesser prairie-chickens in some areas.   One of the most important roles of shrubs is the vegetative structure they provide.  Shrubs offer protective cover for evasion of predators, and mitigate extremes in weather events that frequently occur in the Southern Great Plains. There are also many nongame species of wildlife that have coevolved with sand sagebrush rangelands that are dependent upon the shrubs.  A notable example is the Cassin’s sparrow which is closely associated with sand sagebrush rangelands.

One of the most common range management techniques that is employed on sand sagebrush rangelands is the use of 2,4-D to remove sagebrush.  While it has been suggested that the removal of shrubs may reduce competition with herbaceous species thus creating more resources for forbs, research has shown that it may take 5 to 10 years following application of 2,4-D for annual forb species to recover12. Many of these annual forbs are important for species such as northern bobwhite, ring-necked pheasant, wild turkey, and lesser prairie-chicken. The forbs also provide critical habitat for insects that are important to many wildlife species.  Overall, managing rangelands for multiple ecological services with the use of 2,4-D is not the best option for sand sagebrush rangelands. Therefore, if managers are interested in the integrity of rangelands from a wildlife perspective their management objectives should ensure maintenance of shrubs.

Sand Sagebrush rangelands in the southern Great Plains will continue to be important to livestock producers in the future.   As concern for the lesser prairie-chicken and northern bobwhite continue to increase as populations decline, it is likely that sand sagebrush will become even more important to society in general. Therefore it is imperative that land mangers use the best available science to plan long-term management strategies for sand sagebrush rangelands.  Future management considerations may take into account what impact management strategies may have on the long-term stability of these rangelands.  Fire is an important ecological driver, therefore the increase in the use of fire on sand sagebrush rangelands can benefit livestock production and ecological services such as wildlife habitat.

Learn about the problems associated with the growth of callery pear trees and the different control methods for the various stages.