Landowners across the country are constantly looking for ways to innovate and become more efficient in their everyday practices. Land managers who choose to practice prescribed fire are no different. Landowners know adequate equipment and personnel are needed to conduct each burn as safely as possible. With the advancement of technology, landowners now have access to new cutting-edge technology that could assist in conducting prescribed fires, making it safer and possibly require less people or free up crew members to assist with other tasks. The use of unmanned aerial vehicles (UAV)’s or drones in agriculture is a rapidly growing practice that is being applied to all corners of the industry. Some are using UAVs to
measure forage quantity and quality in their pastures, while others use drones to monitor animal movement or behavior, as well as inspect infrastructure such as fences. Another good use for UAVs can be making prescribed fires safer and easier to conduct by having an Infrared camera on the UAV to monitor fire behavior.

Why Use a UAV with Infrared Technology?

Conventional cameras on drones are referred to as RGB (red, green and blue) cameras, because they show only the visible light spectrum seen with the naked eye. All objects give off infrared energy, which is a non-visible spectrum of light. This also is known as a heat signature. A infrared camera (IR) detects the heat energy and creates an image on a screen visible to humans, letting them see heat signatures. As you can imagine, fire gives off some very intense heat signatures, but also it gives off a lot of smoke. Depending on what kind of fuel is being burned, that smoke can severely inhibit someone from seeing exactly where the fire is and how it is behaving (Figure 1). Many times, prescribed fire crew members must stand in heavy smoke to try to detect spotfires or monitor problem areas. 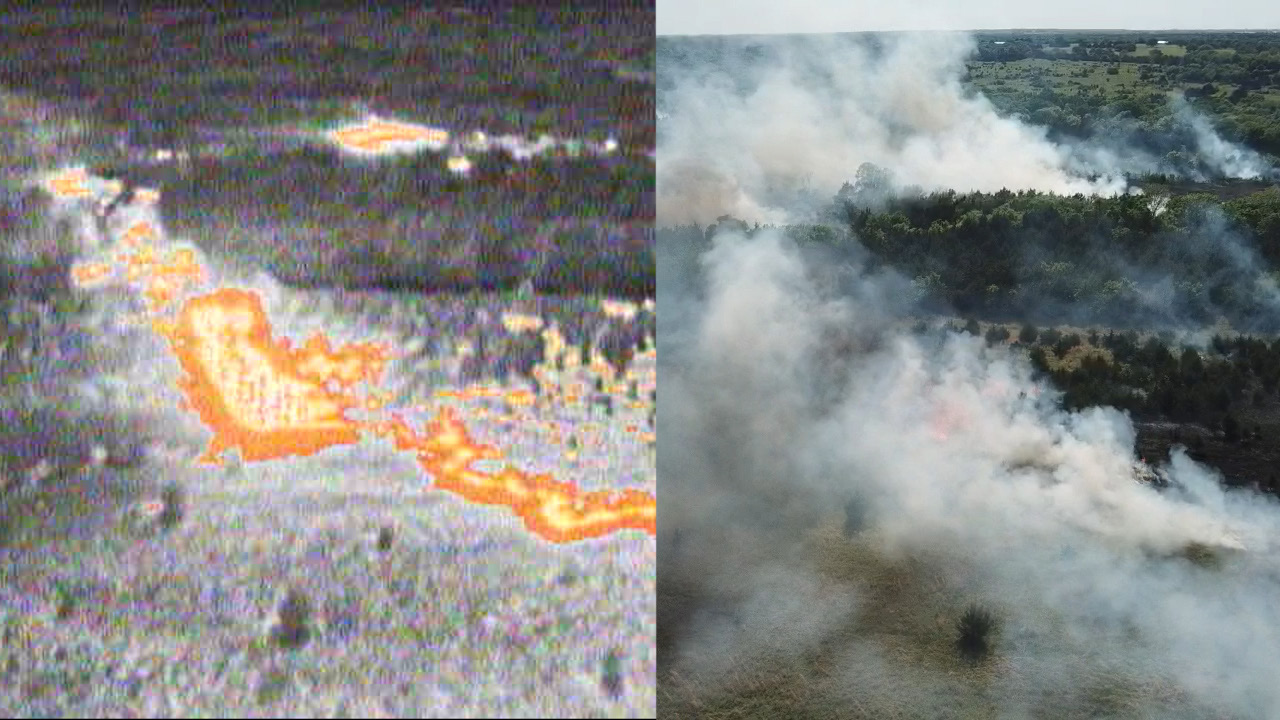 This can aggravate breathing and eyesight. With an Infrared camera on a UAV, the operator now has the ability to see through the smoke with a bird’s eye view. The operator can track how fast and what direction the fire is moving. Thus, reducing the number of people needed to watch problem areas or that have to stand in areas of heavy smoke. This technology has already been implemented by many wildland firefighters, to monitor the behavior of large wildfires. Great utility has been found in using the same technology on prescribed fires as well (Figure 2).

Figure 2. Using a UAV while conducting a prescribed burn allows the operator to monitor smoke and fire behavior, then report it to the fire boss. 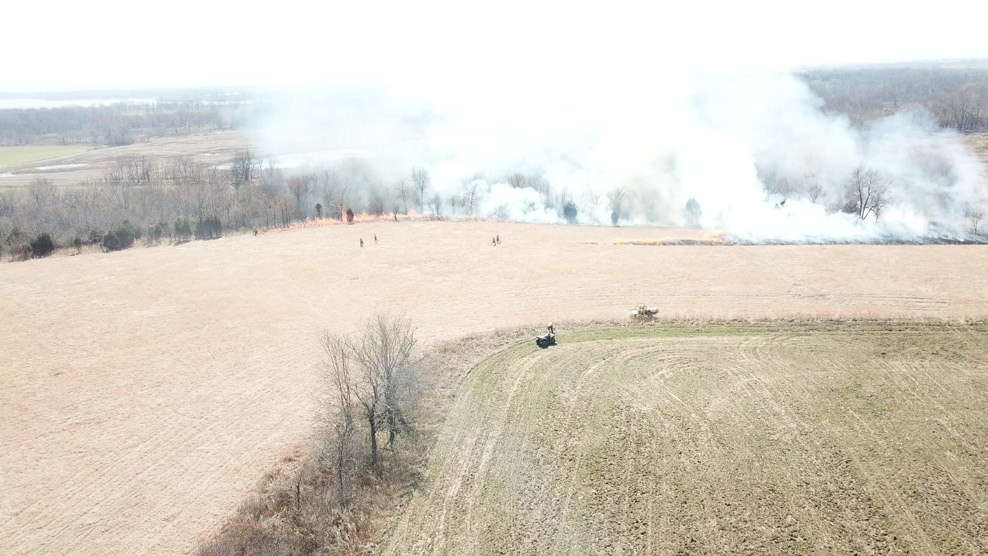 How Can an IR UAV Assist on a Prescribed Burn?

On most prescribed burns, personnel are assigned with the task of traveling along the firebreaks, acting as lookouts for spotfires and escapes, while others are igniting the fire along other parts of the burn unit. This job is often uncomfortable because the crew has to travel back and forth along the firebreak and constantly be in the smoke. The smoke is sometimes too dense to see through, as well as often leaving crew members with irritated eyes, runny noses and dry coughs for a short time. Patrolling the fire line is extremely important, due to the fact that crew members can monitor the fire behavior and alert the rest of the crew if the fire jumps or creeps through the firebreak and is burning outside of the burn unit. To reduce the impact of smoke irritation and possible injury, a single operator with an IR equipped UAV in the air can easily and effectively monitor a much larger area from a safe distance away. An operator with a radio has the potential to see a spotfire or escape as soon as it occurs and can relay the location to the suppression crew who is positioned nearby and out of the smoke. They can then promptly extinguish it, all without putting crew members in the smoke for extended periods (Figure 3).

The fire boss also can utilize these IR UAVs by keeping up with crew member locations, making movements of personnel and equipment with actual “eyes on”, instead of relying on secondhand radio communication (Figure 4). Also, the IR UAVs are used to monitor the fire behavior and areas not safe for crew members. Overflights of the burn unit also can help determine areas that did not burn and need to be reignited. The potential uses of UAVs by prescribed fire personnel is limitless (Figure 5).

Figure 4. UAV use helps to keep track of personnel and equipment placement, then the controller can radio the crew to help direct them safely around the burn unit. 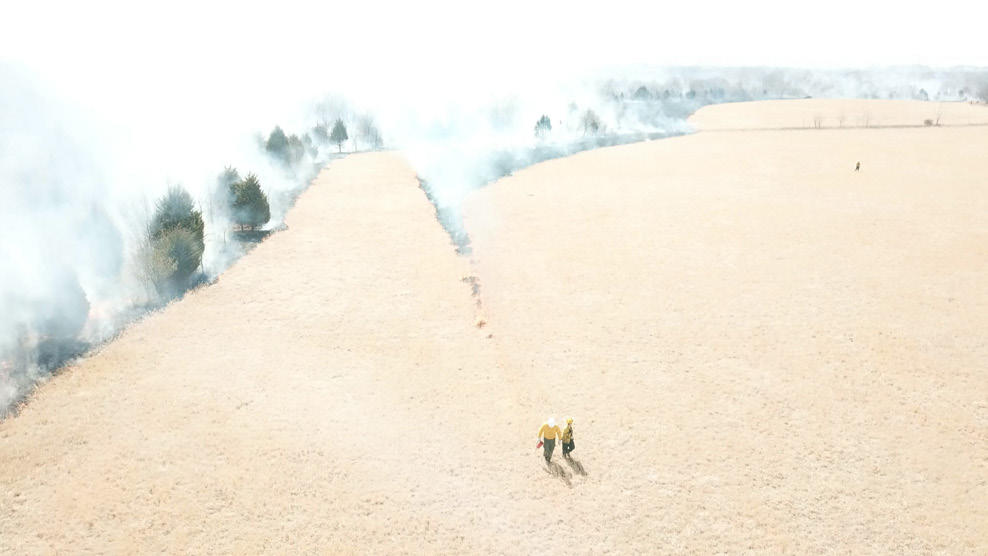 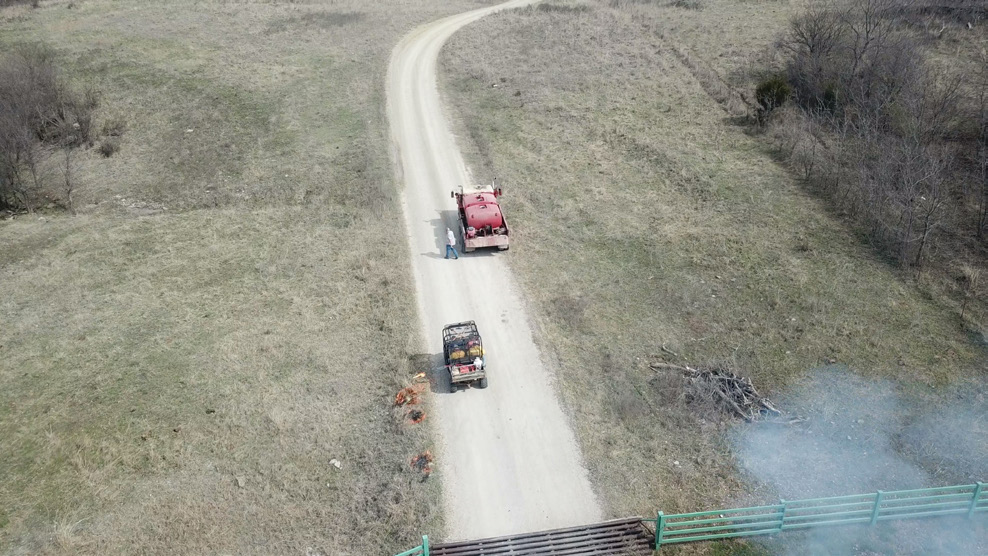 Figure 5. An infrared camera gives the operator the ability to identify hot spots along the edge of the burn unit. This makes mop-up easier and helps to reduce problems. 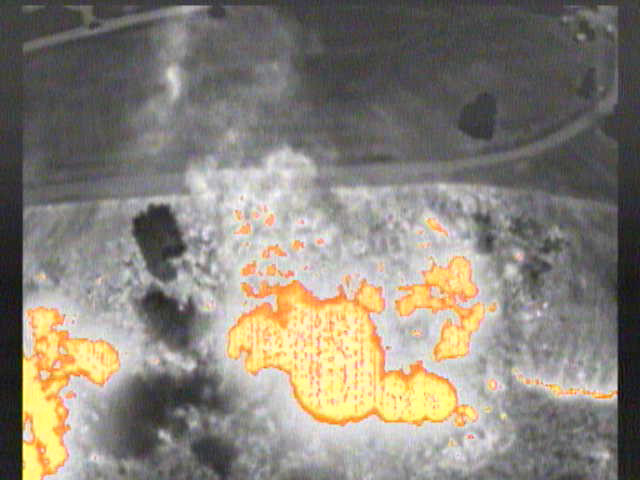 Tips and Tricks for Using UAVs on Prescribed Burns

Since the use of UAVs is becoming more common, restrictions and regulations have come about to ensure the safety of all who use the airspace above us. The basic legality of flying your UAV, defined by the Federal Aviation Administration (FAA) is as follows:

Recreational flyers should know that if they intentionally violate any of these safety requirements, and/or operate in a careless or reckless manner, they could be liable for criminal and/or civil penalties. Obvious areas to avoid would be near or around any airports and near active military installations. Often, airports and military installations have controlled airspaces around them as large as several dozen square miles. Within these airspaces, it is critical to know the ceiling height at which you can legally fly. The FAA has delineated all controlled airspaces at their website. Some not-so-obvious areas would be federal parks, over people (without a proper waiver), over public roadways (as moving cars are considered over people), electrical power-generating facilities, a dam that is regulated by the state or federal government and critical infrastructure designated by the federal government.

There are multiple options for those who want to use infrared imaging to help conduct prescribed burns. A quick web search will bring up dozens of sites with set-ups ranging from entry level to professional and commercial applications. Many UAV dealers have ready-to-go UAV packages with both IR cameras and high-definition RBG cameras. Other options are to add an IR camera to the drone set up you may already own, for which there are many options as well. However not all UAV’s will be able to support the extra weight or have the infrastructure needed to mount another camera. Some research will be needed to ensure the IR camera will successfully mount to what you already have. Pricing can range anywhere from the lower end and entry level of about $3,000 to the more sophisticated and professional end of about $10,000. Prices vary widely on just the individual IR cameras, some come with accessories and mounting hardware and some do not. Many people may be intimidated by the technology used in modern UAVs, but most of the UAVs produced for the consumer market are very user friendly and easy to learn how to pilot. Many of them come with anti-collision sensors and programming to land safely once a certain battery level is reached. Many options also have the ability to fly autonomously with pre-determined flight paths via GPS data delineated by the operator, making it much easier to observe the screen. Flight times can range anywhere from 20 minutes to 40 minutes per battery.

This circular discusses the main goals of smoke management; reducing emissions from fire, improving dispersion of smoke, and making sure smoke plumes do not affect smoke-sensitive areas.

Set of rules for developing and executing prescribed fire and recommendations for special factors or situations to look out for.