Biosolids are byproducts left over from the treatment of waste by municipal wastewater treatment plants. Biosolids consist primarily of partially decomposed organic matter and plant nutrients including nitrogen (N), phosphorus (P), potassium (K), sulfur (S), calcium (Ca), magnesium (Mg), as well as micronutrients iron (Fe), copper (Cu), manganese (Mn), zinc (Zn), nickel (Ni), boron (B) and molybdenum (Mo).  However, biosolids may contain certain undesirable components such as heavy metals, organic chemicals, and pathogens. The quality of biosolids depends on both the characteristics of the original wastes and the treatment processes. The treatment process involves reduction of pathogens and the stabilization of organic matter. Once treated, biosolids may be recycled and land applied as soil amendments to improve and maintain soil quality and stimulate plant growth. Land application of biosolids occurs in all 50 states.

Nationally, biosolids are commonly disposed by incineration, landfill or land application. Approximately 60 percent of the biosolids produced each year in the U.S. are land applied. Biosolids have been successfully used as soil amendments to forests, rangeland, reclamation sites, agricultural lands, public parks and golf courses. More than 50,000 dried tons of stabilized municipal biosolids are land applied in Oklahoma each year (ODEQ, 2013a). More than 60 percent of the municipal biosolids produced in Oklahoma have been successfully land applied (ODEQ, 2013b). The remainder of the produced biosolids is landfilled and none of the biosolids are incinerated in Oklahoma (personal communication, Biosolids Coordinator ODEQ). The treatment of wastewater and disposal of biosolids in Oklahoma are regulated by the Department of Environmental Quality (ODEQ).

In 1993, the U.S. Environmental Protection Agency (USEPA) implemented regulations on land application of biosolids under Code of Federal Regulations Title 40, Part 503. The regulations are commonly referred to as Part 503 rule. Basically, the Part 503 rule established pollutant limits and operational standards to control disease-causing organisms and to reduce the attraction of vectors (disease-carrying organisms) to biosolids. Additionally, the Part 503 rule determined general requirements and management practices, recordkeeping and reporting, as well as frequency of monitoring (Figure 2). The Part 503 rule utilizes risk-based pollutant limits to protect human health and the environment. Although the individual states must meet EPA requirements, they may pass regulations that exceed EPA requirements. 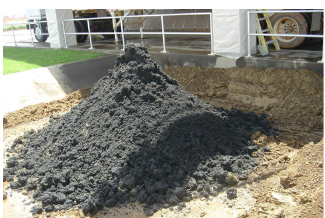 Figure 1. An example of biosolids after most water has been removed. 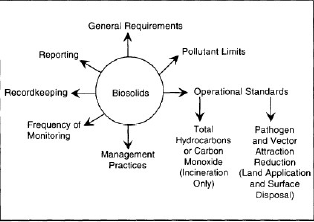 The regulations regarding land application of biosolids are contained in Oklahoma Administrative Code (OAC) 252:606: Oklahoma Pollutant Discharge Elimination System (OPDES) Standards, Chapter 8: Biosolids Requirements (http://www.deq.state.ok.us/rules/606.pdf). According to the Biosolids Coordinator for ODEQ, the state of Oklahoma follows the federal regulations with the exception that Oklahoma does not allow the surface disposal of biosolids.

Basically, the Part 503 rule established two quality criteria for heavy metals in biosolids – the pollutant Ceiling Concentrations and a “exceptional quality” Pollutant Concentrations (Table 1), two quality criteria for pathogens in biosolids – Class A and Class B (discussed below), and two approaches for meeting vector attraction reduction (discussed below).

Table 1. Pollutant limits and loading rates for the land application of biosolids.

† Original Part 503 value is under re-examination by USEPA, this value was obtained from O?Connor et al. (2001).

‡ Under re-examination by USEPA.

Regulatory Limits of Metals in Biosolids

The PCLs are monthly average concentrations. Biosolids may qualify as “Exceptional Quality” (EQ) if they contain levels less than the Pollutant Concentration Limits, meet Class A pathogen levels (virtual absence of pathogens) and meet certain vector attraction reduction requirements. These biosolids have fewer restrictions on use, rate of application or application record keeping and are not subject to cumulative loading rates. For instance, there are no limits on lifetime quantity of pollutants that can be applied to a site and the biosolids application rate is dependent only on the agronomic rate. These concentrations are also known as EPA Table 3 limits, and are the most stringent pollutant limits included in Part 503 for land application. The majority of EQ biosolids produced in Oklahoma are bagged by municipalities and sold as compost.

Biosolids which do not qualify as EQ biosolids are subject to loading rate limits. The maximum amount of a pollutant that can be applied to a site by bulk biosolids is known as the CPLR. The CPLRS represent the maximum amount of a pollutant that can be added to a soil without causing adverse effects on plants, animals, and humans. These biosolids must be applied in bulk form and records are kept until the CPLR of the first pollutant is reached. Once the CPLR has been reached, no more biosolids may be land applied to the site. These concentrations are also known as EPA Table 2.

The maximum amount of a pollutant that can be applied to a site by bagged or biosolids in any other container in a 12-month period is the APLR. These concentrations are also known as EPA Table 4.

Biosolids are classified into two classes (Class A or Class B) based on the density (numbers per unit of mass) of pathogens present in the biosolids. Class A biosolids contain no detectable levels of pathogens (i.e. Salmonella sp. bacteria, enteric viruses and viable helminth ova). Class B biosolids have been treated, but still contain levels of detectable pathogens that do not pose a threat to public health and the environment as long as actions are taken to prevent exposure to the biosolids after their use or disposal. The Part 503 rule pathogen reduction requirements may be met by (a) treatment of biosolids with specific technologies or (b) evaluation of the quality of biosolids using certain performance results.

Because Class B biosolids may contain some pathogens, land application requirements include site restrictions that prevent crop harvesting, animal grazing and public access for a certain period of time until environmental conditions have further reduced pathogens. Similarly to Class A, Part 503 rule lists multiple treatment options for biosolids with respect to pathogens for the Class B classification. Only one of these three alternatives must be met for the biosolids to be deemed Class B. The alternatives are listed and discussed briefly below:

Land application of biosolids is a beneficial way to recycle organic matter and plant nutrients. Biosolids have successfully been used to improve physical, chemical and biological properties of soils and to restore degraded ecosystems. However, biosolids may contain heavy metals, organic chemicals and pathogens that may be detrimental to human health and the environment. Therefore, state and federal rules should be followed to prevent potential agronomic and environmental effects from biosolids land application.