Pumps are widely used in a variety of locations by rural operations. Agricultural producers can use considerable amounts of water transported by pumping.  In some locations with heavy irrigation operations, the pumping systems can comprise the majority of the energy costs.  For this reason, these systems should be inspected and improved if possible.

It is somewhat rare to find older water pumping systems operating at optimal efficiency.  Often these systems were not designed properly and they have degraded over time.  Impellers corrode, wear and even break.  Pump systems and pipes can become clogged with dirt, sediment, and mineral buildup. Often the impeller size is not properly matched to motor power or desired flow rate. The end result is wasted energy and money.

By conducting a pump test, one is able to see how far from optimal (BEP) the actual pump performance is.  In general, pumping systems that are above 60 percent in pumping efficiency (power output of pump in flow and lift divided by power input) are considered to be in excellent condition.  Pumping systems that are 49 percent or below, are either designed incorrectly, in poor condition, or both, and need to be replaced or repaired.  A long term study (ACEEE 1999) showed the average centrifugal well pump efficiency was 55.4 percent in Southern California.  It is anticipated that the same poor efficiency average could be found in many regions of the United States. This indicates that many pumping systems are at or below this value, and therefore, in the poor efficiency range.  Pumps should be tested every three to five years to ensure no loss of efficiency. 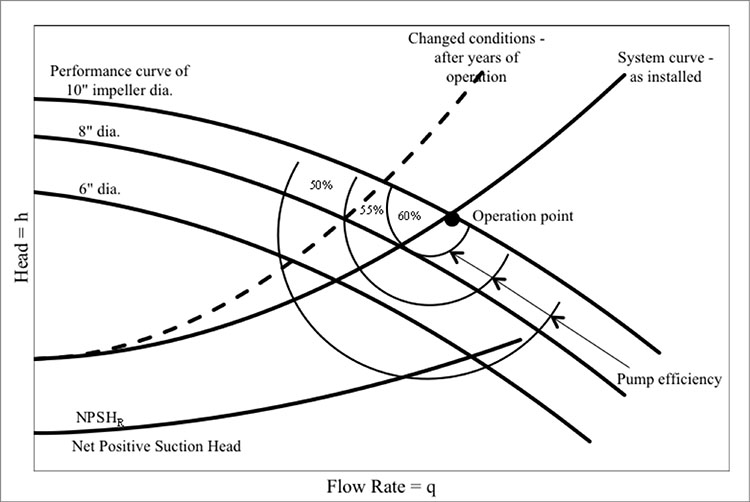 “You can’t improve what you can’t measure” is an old but accurate statement. The total efficiency of a fluid pumping system is a function of the flow rate which can be measured, the specific gravity of the fluid (water for irrigation), the total “dynamic head” (system pressure) and power input (also measured) which is usually the electrical power1 to an electrical motor.  Let’s examine this relationship and how we might determine the efficiency.  The calculated efficiency will, in turn, tell us something about the status of our pumping system and what opportunities we have to save energy and money.

Begin by looking at the required horsepower (HPw) to pump water at a certain pressure (total dynamic head, TDH) and at a certain flow rate (GPM).  This relationship is:

HPw is the horsepower needed to pump the water

The flow rate of the water (GPM) can be measured – maybe not easily though.  In some cases, ultrasonic velocity measuring devices that clamp onto the outside of the piping are used and do not interfere with the water flow.  In other cases a measuring device is used in the water stream.  Once the fluid velocity is determined, multiply by the pipe inside cross-sectional area to get an estimate of the flow rate. If this flow rate is what is needed and is satisfactory, move to the next task. That is, the flow we want is right – now, is it producing that flow efficiently?

Total dynamic head (TDH) is a measure of the amount of resistance to flow in the system.  This is usually measured in terms of “feet”2.  Total head pressure usually comes from three things: amount of elevation change, length and shape of piping system, and end-use pressure requirements.  There are various tables and methods of determining TDH. If pulling water from a well, the well depth is given in feet.  Charts and tables can be used to estimate the TDH for lengths and diameters of pipes due to friction losses in the pipes.  Turns and valves in the pipe system add “feet” to the TDH as they resist flow also.  Finally, the end uses such as nozzles, spray heads, and drip irrigation add their own pressure requirements.  Of the parameters to be measured, TDH is one of the most difficult and is often estimated to some degree instead of achieving a precise measurement. Pressure requirements are also often over-estimated and a “just in case” over-design is often used.  This can lead to lower pump performance and high costs over time.

Once there is the power needed to pump the water (HPw) at the actual present flow rate, measure the actual electrical power (Pe) being used to currently pump the water at the GPM measured. A comparison ratio of actual to theoretical optimum power reflects the pumping system’s actual efficiency via the following relationship:

Notice that the measured power will always be greater than the theoretical power, therefore the efficiency will always be less than 1.0 (100 percent).  In reality it will never get close to even 0.8 (80 percent) because of the combined pump and motor’s efficiencies in the kW measured. Typically, the pumping system’s total efficiency will be between 0.4 and 0.7 (40 percent and 70 percent).  The system efficiency will also tend to be better as the pumping system gets larger.  This is because large electric motors and pumps are generally more efficient than smaller motors and pumps.  Table 1 shows a range of pump system efficiencies for different motor horsepower.  Notice the general increase in efficiency as equipment gets bigger. This does not imply you should purposely oversize equipment however.

To see what the energy cost implications of this are, the following calculations for one 30 HP pump will help illustrate the costs involved. Let’s say the efficiency of the example pump in question is determined to be 45 percent using the techniques mentioned above.  This could be an old pump that is seriously clogged with sediment and has wear on the impeller. This low efficiency example is not uncommon.  What if we could rework the system to be 61 percent efficient?

2 In water systems, “feet” of pressure correspond directly to psi pressure. It is an old measurement system still in wide use.

If the current pump system calculated at 45 percent pumping efficiency is improved to 61 percent efficiency, and the pump is assumed to be running 85 percent of the time:

As can be seen, this is not a small amount of savings!  Multiply this by several pumping systems with similar efficiencies over several years and you get tens of thousands of dollars of opportunity cost. Achieving a 61 percent pumping efficiency might require extensive rework of the current system but the cost savings over time can be attractive.

Acquiring the data needed for the pump efficiency calculations can sometimes prove difficult. The depth of the well is needed, as well as, an accurate estimate of the system distribution head pressure. Well openings are sometimes not accessible and so water level is often guessed.  The flow rate of the pump system can sometimes be difficult to measure for a variety of reasons.  If air or solids are in the water flow, faulty velocity measurements can result. Possibly the biggest problem for average cost calculations is that most systems do not operate at one constant load.  Determining the average or actual load may require multiple measurements with equipment.  Without actual system data, average loads over long time periods are often over estimated.

While you may not have the equipment or means to perform the pump tests, if your operation has several large pumps running for long periods of time, it may be worth the expense to have these systems tested by a professional. Companies that often have this service include: irrigation, well drilling and pump supply companies. If the efficiencies are reported to be low, the companies may also be able to help you service or redesign the systems. You might test a sample of pumps and determine if further testing is justified.  It is also doubtful that electrical utility costs will decrease in the future.  Remember, if pump system run times are long – the payback time may be short and very attractive for addressing the problems.

Based on fact sheet from Texas Cattle Feeders Association grant

A guide to constructing and maintaining portable ultrasonic flowmeters.

Learn about the seven principles of a water-wise landscape to reduce outdoor water use.