Horseweed (Conyza canadensis L.), also known as marestail, is a common weed found in pastures, agricultural fields, riparian areas and roadsides in Oklahoma. It is an erect broadleaf plant with alternate leaves that vary in leaf shape with some being more lobed than others (Figure 1). It grows to approximately 8 feet tall and has a branched flower structure with small yellow and white flowers (Figures 2 and 3). Horseweed has many adaptive abilities that contribute to its success as a weed. Plants can produce up to 200,000 seeds per plant, which can be dispersed to as much as 400 feet downwind. Horseweed seed also is unique because it has no dormancy period; thus, once the seed contacts the soil surface, it can germinate if conditions are suitable. Although horseweed is traditionally considered a winter annual, it can behave like a summer annual under certain conditions. In Oklahoma, germination occurs in both the fall and the spring. 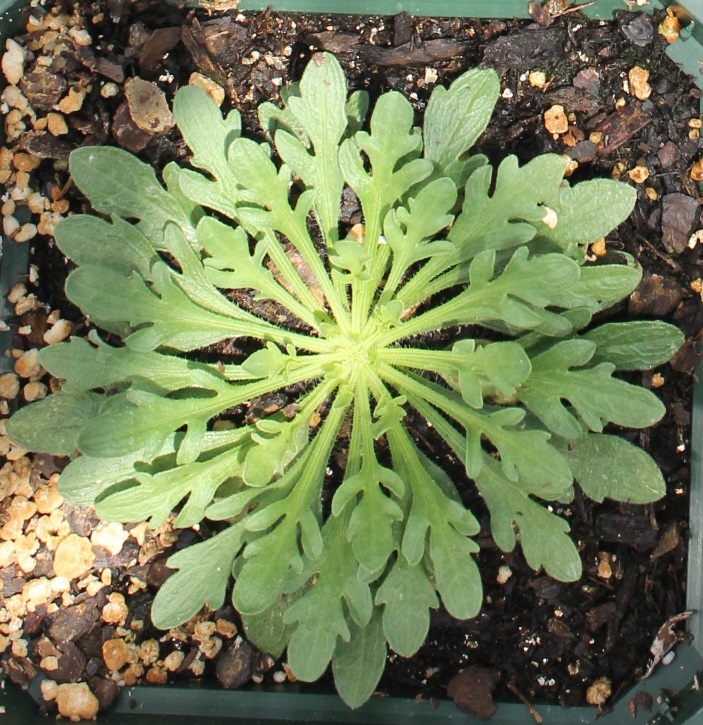 Despite its success, horseweed has not been considered a major agronomic pest because of its susceptibility to tillage. However, with the increase in conservation tillage and no-till acres, horseweed has become one of the most problematic weeds for farmers involved in these systems. As mechanical control of this plant decreases, chemical management often increases, further selecting for herbicide resistant biotypes and ultimately complicating a producer’s weed management decisions. If horseweed is not controlled in wheat, it may lead to unnecessary equipment costs and/or discounts at the elevator due to excessive grain moisture from green plants at harvest or dockage from weed seeds present in harvested grain. 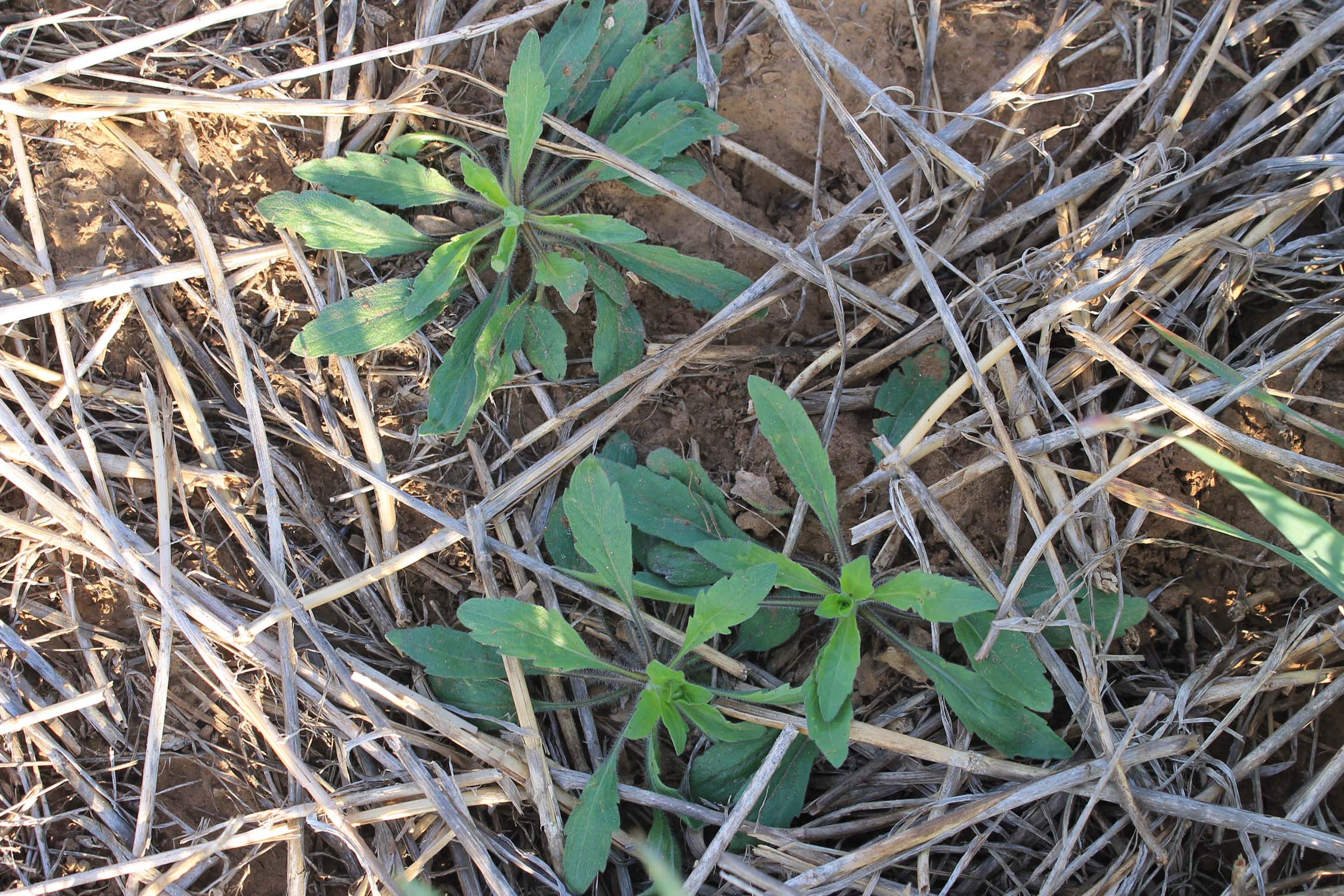 There are several herbicides available for postemergent horseweed control in wheat. 2,4-D is still effective, widely used and one of the oldest synthetic auxin herbicides (Group 4) available and is used for broadleaf weed control on approximately 20% of wheat grown in the southern Great Plains region (USDA-NASS 2018). Similar to 2,4-D, MCPA can be an effective option for horseweed control in wheat. However, MCPA use alone on horseweed is often less effective compared with 2,4-D alone or when mixed with another herbicide. Similar to 2,4-D, other common synthetic auxins used for horseweed management in wheat include dicamba and fluroxypyr. 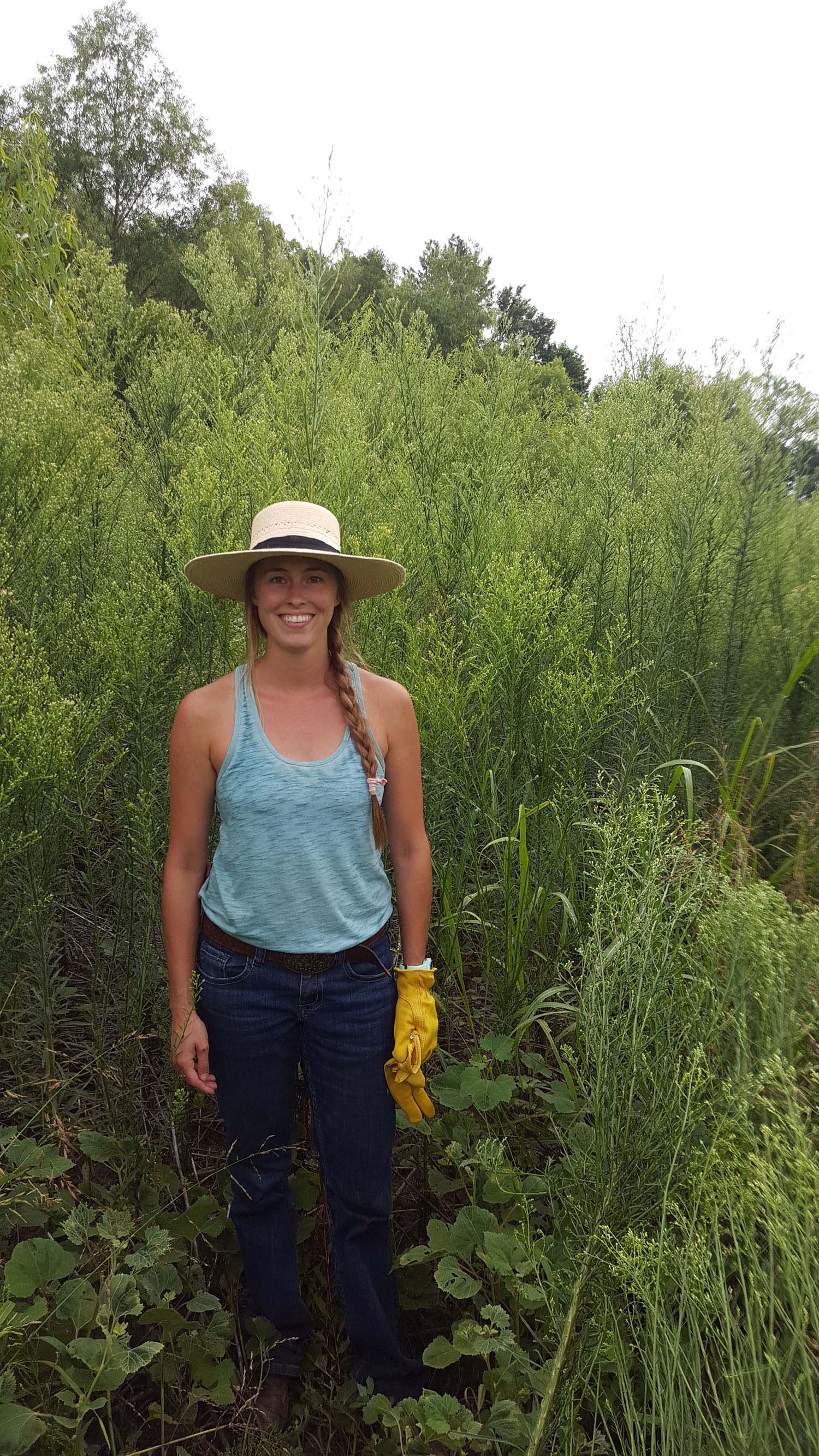 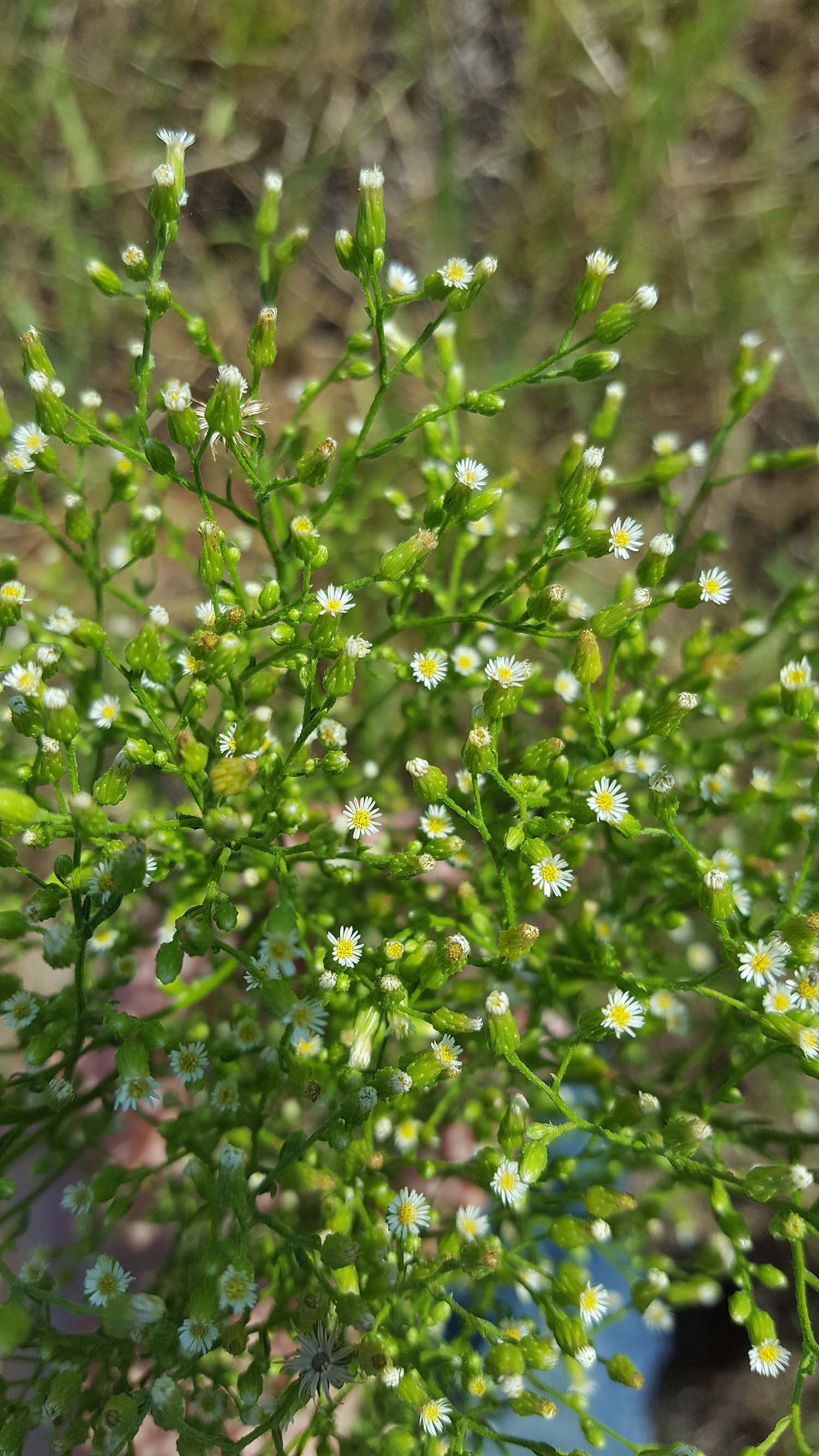 Another group of herbicides that can be applied preemergence and postemergence in wheat are ALS inhibiting (Group 2) herbicides. Horseweed resistance to some ALS inhibitors [and glyphosate (Group 9)] have been documented in Oklahoma. Horseweed plants resistant to the ALS herbicides metsulfuron and chlorsulfuon were recently confirmed from screening populations that occurred in field sites throughout Oklahoma (http://www.weedscience.org/Details/USState.aspx?StateAbbr=OK). 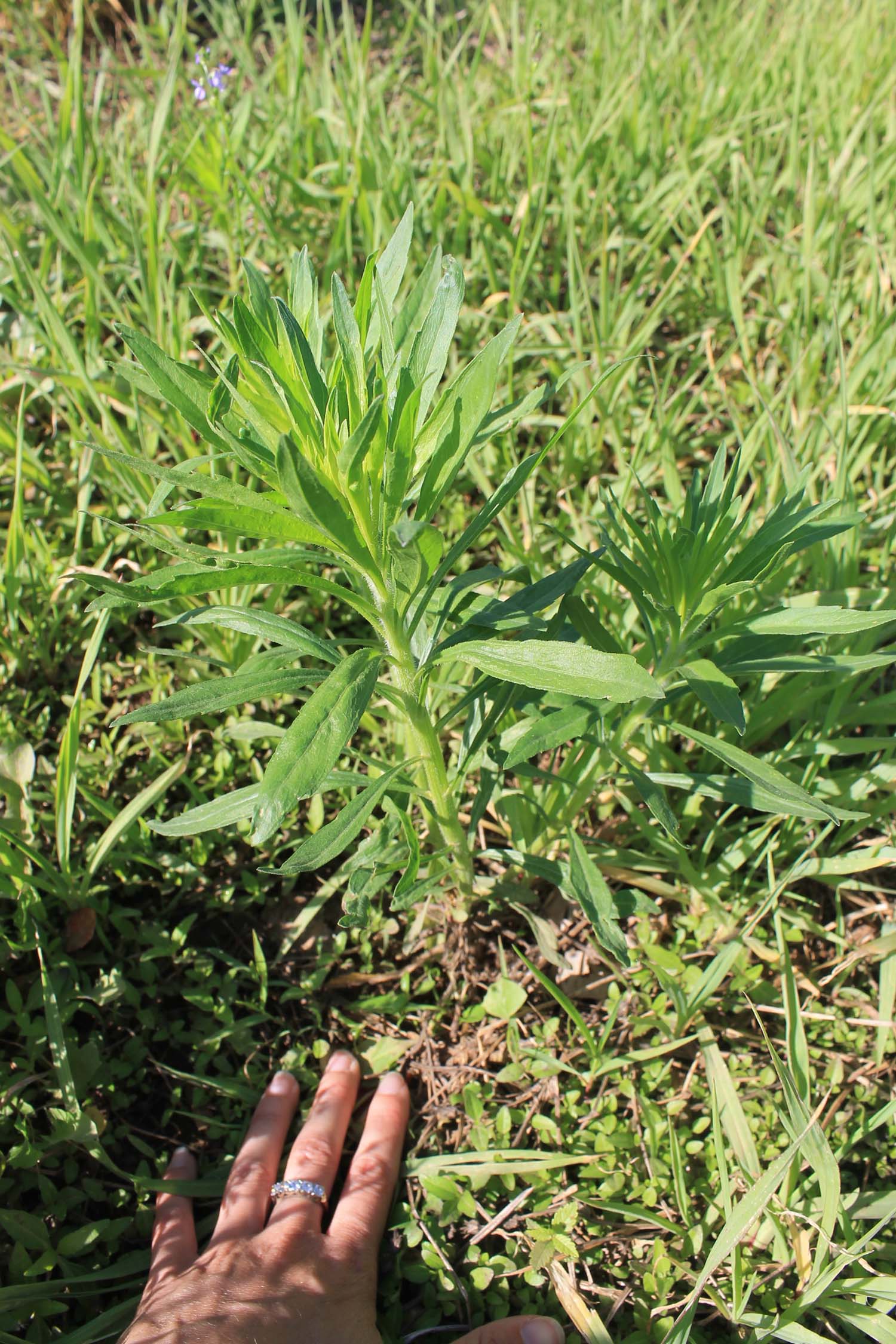 A premix of a new synthetic auxin and an ALS inhibitor, halauxifen plus florasulam (Quelex®), was recently introduced to the market. Quelex® is labelled for use in wheat, barley and triticale. Application timing for best control of horseweed with this product is recommended at a height of 4 inches or less. Another relatively new postemergent broadleaf herbicide in wheat and barley is bicyclopyrone plus bromoxynil (Talinor®). Bicyclopyrone is a HPPD inhibitor (Group 27), while bromoxynil is a photosystem II inhibitor (Group 6). This combination is packaged in conjunction with the spray additive CoAct+™. Application timing is recommended for horseweed up to a 3-inch rosette. Finally, another new premix that contains an ALS inhibitor (thifensulfuron) and a synthetic auxin (fluroxypyr) is Sentrallas® and is labeled for use in wheat, barley and oat. Effective control horseweed in wheat will require incorporation of multiple herbicide sites of action and the application of nonchemical weed control methods. However, as new herbicide products are developed, it is imperative to determine their effectiveness at managing weed populations, evaluate their likelihood of crop injury and gain a better understanding of how they will perform in different environments across a region. Six trials were conducted at three locations across Oklahoma during the 2016-17 and 2017-18 winter wheat growing season. The goal of the study was to evaluate horseweed control with previously available products as well as newer products. The herbicides and rates used are included in Table 1.

All herbicide applications that included Quelex®, Sentrallas® and/or dicamba were in the top-performing group of treatments for controlling horseweed that ranged from 2 to 4 inches of rosette width. These applications also were the most consistent. Dicamba in place of MCPA in mixes with Finesse® or Sentrallas® increased horseweed control as horseweed is more sensitive to dicamba than MCPA. Talinor® consistently provided the least control and will not be recommended for horseweed management in winter wheat in Oklahoma (Figures 4 and 5, page 4). Additionally, the presence or absence of ALS-resistant horseweed populations contributed to a treatment’s effectiveness and should be considered when selecting a management plan. Horseweed is best managed with an integrated system consisting of multiple management strategies, such as mechanical, chemical and cultural (crop rotation, fertility management, etc.) control. If chemical practices are implemented in winter wheat, they need to occur prior to bolting (Figure 6) of horseweed rosettes as harvest aids in winter wheat are often inconsistent and expensive. Refer to Fact Sheet PSS-2188, Harvest Aid Weed Management in Wheat for more information.

Figure 4. End of season horseweed control following applications of 2-inch horseweeds at Altus in 2016-17 and Perkins in 2017-18.

Figure 5. End of season horseweed control following applications of 4-inch horseweeds at Perkins in 2016-17 and Ponca City in 2017-18.