Cattle require a minimum amount of water, reflecting the water necessary for growth, fetal development, lactation, and replacing water lost from urine, sweat, and evaporation. An adequate supply of clean, fresh water is a critical component of maintaining healthy, productive livestock. Additionally, knowledge of water needs for livestock is necessary when designing water-supply systems where the water supply may be limited or the delivery system restricts access to water during periods of heavy use.

Water is necessary for the majority of life processes, including blood volume maintenance, regulation of temperature, growth, reproduction, lactation, and digestion. In fact, the body weight of mature cattle is about 50 percent water (Johnson et al. 2012). Primary factors known to influence water requirements include age, weight, stage of production, and environment.

Compared to protein and energy requirements, water requirements and voluntary water intake of beef cattle have not been extensively studied in recent years. For example, water consumption guidelines published in Nutrient Requirements of Beef Cattle (NRC, 2000) were taken from research data published in 1956 (Winchester and Morris, 1956). 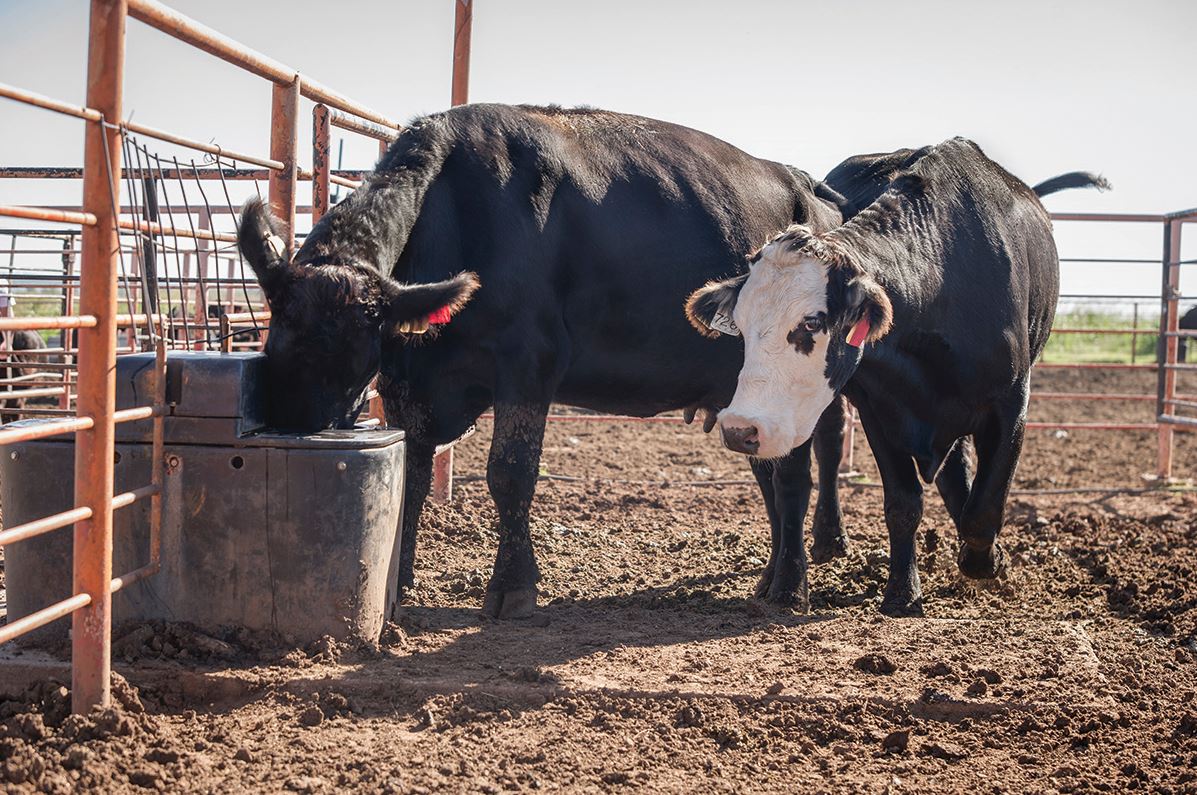 During warm months, daily ambient temperature and humidity have a dramatic effect on heat stress and thus water intake in feedlot cattle (Arias and Mader, 2011). These authors reported that a temperature humidity index was the best single environmental indicator of daily water intake. The temperature humidity index is calculated using a combination of the daily average temperature and relative humidity. The Cattle Comfort Index is a similar tool provided through the Oklahoma Mesonet and used to monitor heat and cold stress in cattle (Richards et al., 2012). The Cattle Comfort Index is calculated using ambient temperature, humidity, wind speed, precipitation, and sunlight.

Published research investigating the influence of ambient temperature, humidity, or the combination on average daily water consumption for beef cows is not readily available. Consequently, for this publication, the influence of ambient temperature on water intake was estimated using the approximate mean of the published estimates shown above (0.85 pound of increased water intake per one degree increase in temperature beyond 40 degrees Fahrenheit). Therefore, for every 10 degrees Fahrenheit increase in ambient temperature, an additional one gallon of water should be supplied per animal.

Milk composition in beef cows is about 4 percent fat and 8.3 percent other solids (protein, carbohydrates, and minerals; NRC, 2000). Consequently, average water content of milk produced by beef cows is about 87.7 percent. Therefore, lactation has a direct impact on water requirements and water consumption. No publications defining the relationship of milk yield to water consumption in beef cows were found for this publication. Winchester and Morris (1956) concluded that lactating dairy cows consumed an additional 0.87 pound of water per pound of increased milk production. Similarly, Murphy et al. (1983) reported a linear relationship between milk yield and water intake in dairy cows with 0.9 pound of increased water intake for every 1 pound of additional milk produced. Therefore, water intake estimates shown in Table 2 were adjusted by 0.9 pound for each pound of milk produced.

The dry matter content of feedstuffs is the proportion of the feed that is not water. Since the water content of forage and feed is extremely variable (Table 1), and because all feedstuffs contain water, feed and forage are important sources of water for beef cattle. Because of this, not all water needs to be provided as free water (drinking water). Compared to dormant pasture, grains, and hay, feeds such as silages and growing pasture are higher in moisture. Nutritional guidelines for beef (NRC, 2000) and dairy (NRC, 2001) cows suggest that consumption of free water declines as the moisture content of feeds in the diet increases.

These estimates for water consumption are intended to represent total daily water consumption. Free water intake could be substantially lower than the estimates presented in this publication when beef cows consume feeds containing considerable moisture.

Building a beef cow herd is challenging for beginners and younger cow-calf producers due to the intensive capital requirements and approximate 27-month lag between the initial purchase of heifers and the sale of a calf crop.