Drill Condition and Wheat Emergence in Oklahoma: A Survey

Stand establishment is the first step in producing a good wheat crop, and most producers intend to obtain a uniform stand of wheat. However, intentions are not always the same as reality when it comes to wheat establishment. A study conducted in the early 1990s by the OSU Small Grains Extension Program compared producer perception of wheat seeding accuracy with actual field measurements. Researchers found that producers expected an average of 77 percent planted seeds to result in established wheat plants, but in reality only 57 percent of viable wheat seed actually emerged. Poor emergence was partially explained by the fact that a mere 21 percent of producers were planting at their target seeding depth and 90 percent of fields surveyed had greater than 0.25-inch variation in seeding depth.

Several improvements in drill design and seed quality have occurred during the past 20 years, so we designed a similar study to determine if these advances have resulted in actual improvements in stand establishment. During the 2009 and 2010 wheat planting seasons, producers who were in the process of sowing were stopped and asked to participate in our survey. Upon their consent, we made visual observations of overall drill condition, soil seeding condition and surface residue. We surveyed a total of 30 producers (one field per producer) across western Oklahoma. 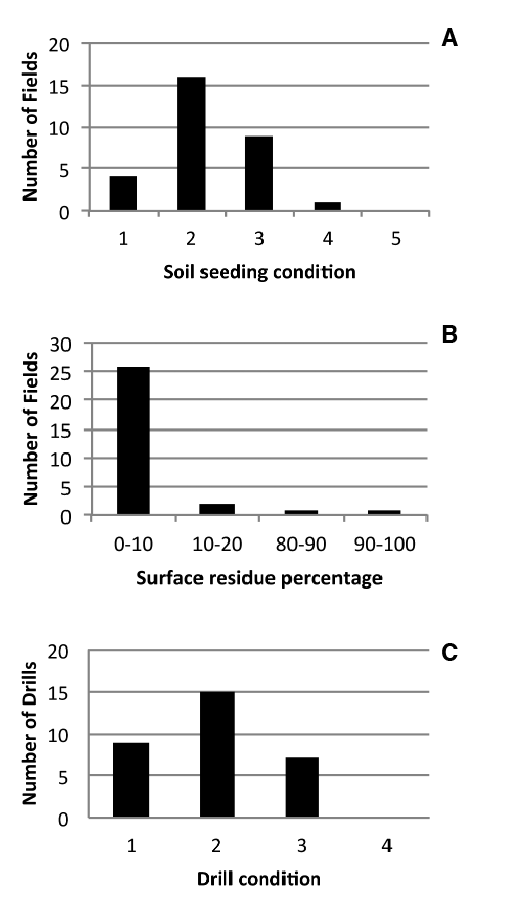 Drill calibration is not an exact science, so we also looked at the data using a ± 10 percent window of accuracy for each producer’s target seeding rate. For example, if a producer had a target seeding rate of 100 pounds per acre, their accuracy window was between 90 and 110 pounds per acre. As long as they were sowing within this range, their seeding rate was considered accurate. Using this more lenient accuracy threshold still resulted in only 25 percent of producers surveyed falling within their ± 10 percent accuracy window.

Some of the inconsistency between the measured seeding rate and reported seeding rate is likely attributable to calibration method. Many growers calibrate according to total seed applied to a given acreage. That is, if they wish to sow 100 pounds per acre on 80 acres, they would expect to use 8,000 pounds of seed. However, this does not allow for overlap. A grower using this method and overlapping 20 percent would actually apply approximately 80 pounds per acre on the bulk of the field and a 2X rate on the overlap areas.

Stand counts were taken in a 1-yard by one-row area in five random locations throughout the field approximately two weeks after the initial visit with the producer. In situations where seed germination was hindered because of a lack of moisture, stand counts were not taken until the area received rainfall sufficient for wheat emergence. The length of time between the initial and second visit to the field, however, never exceeded three weeks. Percentage emergence was calculated by dividing the average number of plants per yard of row by the number of seeds sown per yard of row (determined from calibration measurements at planting).

All but one of the 30 seed lots tested had germination of 85 percent or greater in the laboratory. Field emergence deviated significantly from lab germination with a range of 36 percent to 100 percent emergence (Figure 2B). While none of the producers surveyed expected their emergence to be below 80 percent, 20 of the 30 producers fell below this benchmark. One seed lot had 70 percent germination in lab tests, and poor field emergence was attributed to bad seed in this case. However, the remaining 19 survey sites with less than 80 percent emergence were the result of seeding issues rather than seed quality. Our results are similar to those from the early 1990s study where researchers determined that poor stand establishment was generally not the result of poor seed germination and further indicate the need for improved precision and attention to detail when seeding wheat.

Researchers conducting the 1992 survey concluded that most producers were planting less than their target rate. The majority of producers in our survey were also sowing less than their target rate, and 75 percent of the producers were sowing outside of the ± 10 percent window of accuracy. These results indicate that drill calibration is still not being performed on a regular basis by Oklahoma wheat producers and is resulting in lower than optimal seeding rates in many fields.

A small percentage of producers had their drills planting at an accurate rate, but most drills were set to deliver less than the target seeding rate. This issue could be easily corrected by a quick drill calibration every time the field conditions change. The settings provided on the underside of the drill box lid can be used to get close to the desired seeding rate, and this setting is a good starting point when performing calibration on a drill.

Seedling emergence results were generally lower than germination. Planting high quality seed, having functioning press wheels and double-disc openers, decreasing the depth of the tillage operation prior to sowing, and occasionally checking seeding depth throughout the field will all improve seedling emergence. A seed treatment also can be used to improve emergence in situations where disease is likely.

Seeding depth frequently differed from the target depth and in several cases by more than 1/2 inch. Seeding depth is particularly important because wheat varieties differ in coleoptile length. If a producer is planting a variety with a short coleoptile and the planting depth is deeper than targeted, emergence will be significantly hindered. Seeding depth should be checked randomly across the field and should be adjusted as field conditions change.