Roses continue to be one of the most popular flowers in the garden landscape. Oklahoma roses will produce large quantities of high quality blooms when given proper care. People who like to spend time in the garden will find that rose culture can be a rewarding hobby.

Although some cultivars are less susceptible to diseases, there are none that are resistant to all diseases. Black spot, powdery mildew, rose rosette disease, crown gall, and nematode damage are the major disease problems in Oklahoma. Of these, black spot and powdery mildew are the most prevalent fungal diseases. However, there are roses that are resistant to both diseases (Table 1). Rose rosette is a serious viral disease and management is covered in EPP-7329, “Rose Rosette Disease.” Damage from plant parasitic nematodes seldom kills roses. The nematodes can, however, weaken plants to the extent that plants cannot withstand severe winter conditions, diseases, insects, and drought.

Table 1. Roses with resistance to Black Spot and Powdery Mildew.

Black spot is a serious disease of rose plants. It is characterized by circular black spots on leaves. The spots are distinguished from other leaf spot diseases by the fringed margins and consistently black color of the spots (Figure 1).

The spots vary in size from a 1/2 inch or more than one inch in diameter. Spots may merge to produce large irregular lesions. Yellowing often occurs over the entire leaf, but it may develop only around the spots (Figure 2). When plants are badly infected, leaves drop prematurely and canes may become completely defoliated, thereby reducing the quantity of the flowers and eventually killing the plant.

Warm, wet weather favors the spread of pathogens. Spores of the fungus are spread mainly by splashing water or rain. They germinate in water and infection takes place only when water remains on the leaves for periods of six hours or longer. 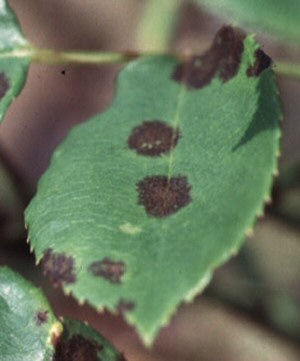 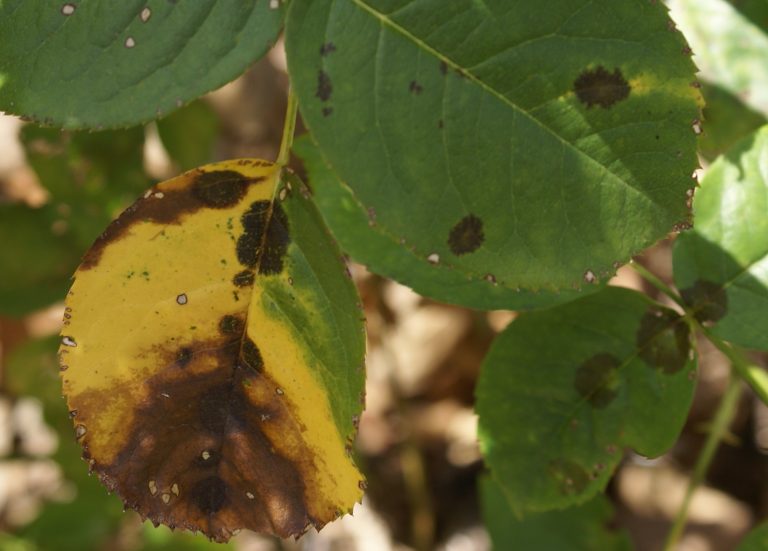 These materials have been well formulated and, if used properly, will give excellent results.

Powdery mildew is one of the most widely distributed and common diseases of roses. Unlike many foliar diseases, it may be serious in dry climates as well as in humid regions. It develops over a wide range of temperatures.

Powdery mildew produces a powdery, whitish coating on the leaves and other plant parts (Figure 3). In severe cases, plants may become stunted, leaves may curl, become dried, and drop. Unopened buds, young stems, and thorns may be entirely overgrown with the powdery coating. Only in very rare cases does death of the plant result from infection.

Generally, the most favorable conditions for powdery mildew infection are as follows: daytime temperature near 80 F (27 C) and a relative humidity of 97 percent to 100 percent. These conditions prevail during most of the early part of the growing season, thus fungicide applications must be made on a regular basis. In irrigated landscapes, relative humidity may remain high in the humidity throughout the growing season, so powdery mildew may continue to be a problem. 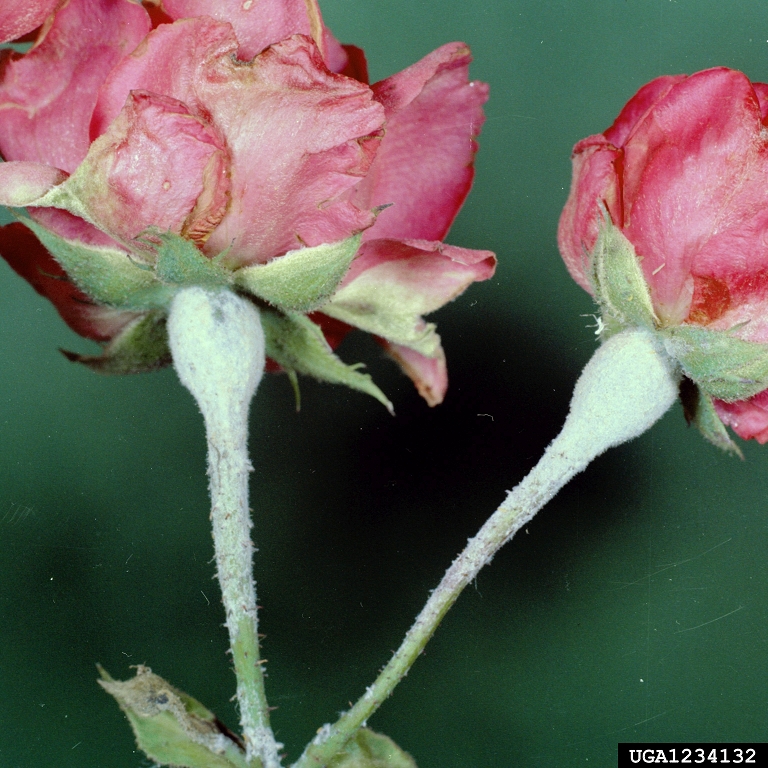 Maintain proper plant spacing to allow for air circulation through the canopy. Thin plants as needed. Fungicides can be sprayed preventatively when moderate temperature and high humidity is expected, usually in the spring. At the first evidence of disease, fungicides should be applied on a weekly basis until dry weather returns. Thoroughly applied fungicides can effectively control powdery mildew (for suggested fungicides, refer to the current circular E-832, Extension Agents’ Handbook of Insect, Plant Disease, and Weed Control). To avoid making repeated fungicide applications, a few resistant cultivars are listed in Table 1. Additional cultivars may be available at the local nursery.

Several species of fungi cause cankers (sunken, swollen or broken areas) on rose canes. Cankers usually appear as discolored areas on dead and dying canes and vary in color from light tan to a dark purplish brown (Figure 4). The causal fungi enter healthy canes through wounds caused by improper pruning, flower cutting, wind, hail damage, winter injury, and cultivation injury. Once the fungal pathogen has entered the plant, the canker may grow and eventually girdle the stem causing a dieback of the cane and, upon reaching the crown, may destroy other canes or the entire plant.

Figure 4. Stem cankers are visible on rose canes as discolored areas which may be sunken, swollen or broken

Botrytis blight affects many types of roses. The disease prevents blooms from opening as it causes a brown decay. Sometimes partially opened flowers are attacked, and the individual petals turn brown and shrivel. The fungus is always present in rainy seasons when old flowers are not removed. The fungus also lives in winter-killed canes.

Destroy old blooms and dead canes to remove as much fungal inoculum as possible. This fungus will be controlled if a good black spot spray program is followed. Thinning plants to improve air circulation through the canopy is helpful.

Crown gall is characterized by formation of outgrowths (galls) which vary in form and size. At first, the galls are very small with rounded outgrowths on the plant surface. Development continues and the galls may become several inches in diameter. They generally form near on the crown (Figure 5). Galls can also occur on roots and occasionally on aerial parts of rose plants. 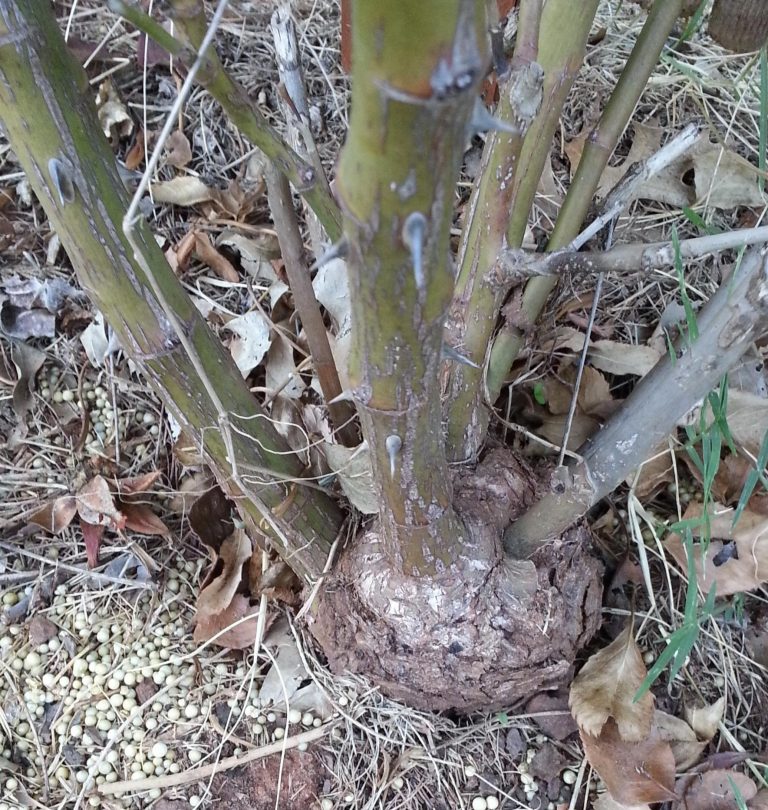 Figure 5. Crown gall is characterized by outgrowths (galls) which often occur near the soil-line or on roots.

Like all vegetatively propagated plants, roses are subject to infection by virus pathogens that are spread during propagation or feeding by arthropods. Diseased plants tend to be less vigorous and less likely to survive than healthy plants, and diseases often detract from the aesthetic quality of plants. Two of these diseases are discussed below. 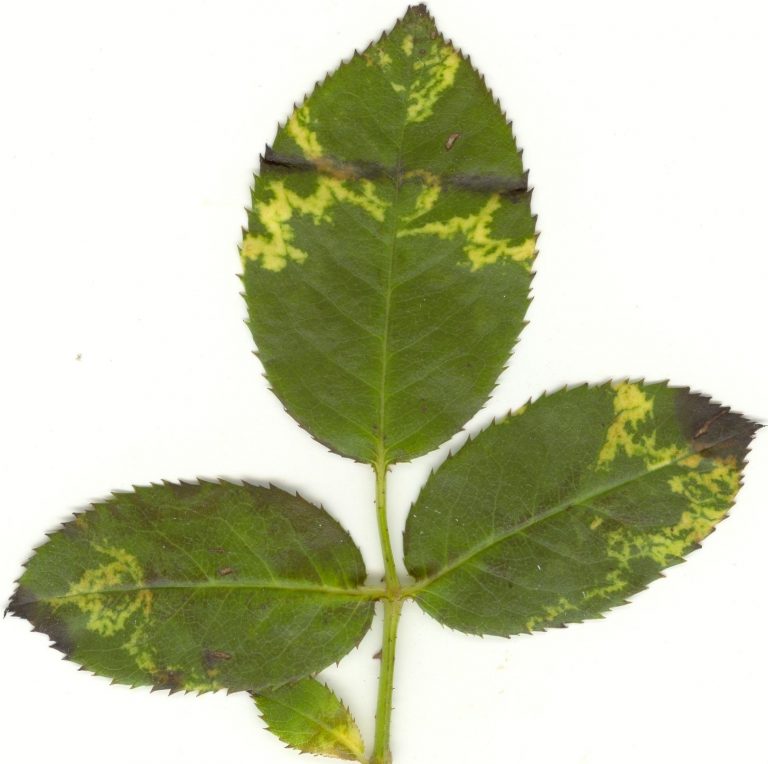 There is no known practical cure for diseases caused by viruses once infection has occurred. Infection with rose mosaic does not sufficiently damage plants to necessitate their immediate removal. However, all plants with significant symptoms caused by viruses should be removed from the nursery or landscape and destroyed. The best control for virus diseases is to use only pathogen-free buds and rootstocks during propagation.

Many rose growers have observed rose plants that have failed to respond to good cultural practices and exhibit yellowing, dwarfing, and reduced vitality. These symptoms may be caused by plant-parasitic, microscopic worms called nematodes. Above-ground symptoms are an indirect result of root damage. Below-ground symptoms include root galls (root-knot nematodes), root lesions (root-lesion and ring nematodes), and injured root tips (stubby-root and other nematodes).

Some cases of iron or other micronutrient deficiency are caused by some factor that interferes with the availability or uptake from soil, rather than by an actual deficiency in the soil. These influences include high soil pH, poor soil aeration, overwatering, root-knot nematodes, extremes in temperatures, high soluble salt concentrations, and over-fertilization. For long-term correction of iron or micronutrient deficiency, the appropriate soil problem needs to be identified and corrected. For short-term correction of iron deficiency, foliar applications of chelated iron products can be made. A soil analysis should be done to determine soil pH and the amount of lime or sulfur needed to change the pH to a suitable value. Refer to OSU Extension Fact Sheet HLA-6412, “Fertilizing Shade and Ornamental Trees and Shrubs.”

It is important to continue disease and insect control and proper watering to help plants recover from herbicide injury. Significantly disfigured plants may require removal. If the herbicide contaminates the soil, it is not recommended to replant into the same area until the herbicide is degraded. 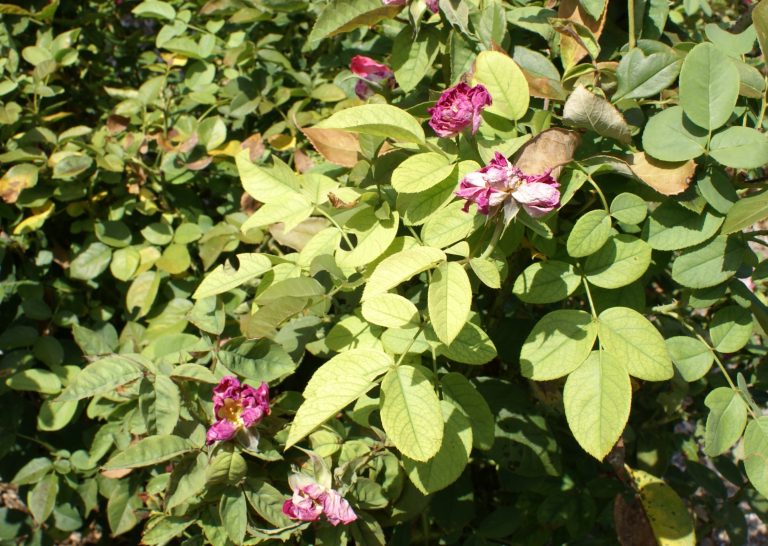 Figure 7. Nitrogen deficiency causes rose leaves to have a light green appearance. The veins are also lighter colored than normal.