Effective control of insects in stored grain with phosphine requires exposing the insects to the appropriate concentration of fumigant for the correct amount of time.  For wheat in Oklahoma, it is recommended that a phosphine concentration of at least 200 parts per million be maintained for 100 hours to kill all life stages of insects. Research has shown that in many applications, the fumigant is not evenly distributed and some parts of the grain bin receive less than the lethal dosage.  This leads to ineffective fumigation and can also promote development of phosphine resistance in insects over time.

Phosphine gas tends to naturally diffuse through a grain bin, although several factors can lead to uneven distribution:

To overcome these factors, the following measures are often employed:

These measures cause increased material and/or labor costs and can increase risks to workers from exposure to fumigants and entry into enclosed spaces. Unnecessary turning of grain incurs shrinkage costs due to kernel damage and moisture and grain loss.

A closed-loop fumigation (CLF) system can be added to many grain storage structures to speed up the distribution of phosphine gas and make the concentration more uniform throughout. A drawing of a CLF system on a round grain bin is shown in Figure 1. For a typical closed-loop fumigation, aluminum or magnesium phosphide pellets or tablets are placed on top of the grain where they react with moisture in the air to produce phosphine gas (PH3). The CLF system uses a small fan to recirculate air/PH3 in the bin by drawing it out of the headspace and introducing it back into the bottom of the bin. There the fumigant passes through the perforated floor and into the grain mass. The fumigant passes upward through the grain until it enters the headspace where the cycle repeats. The CLF system is operated after the tablets/pellets are completely reacted. After several cycles through the bin, the fumigant is evenly distributed. Following the initial redistribution of air/PH3 the CLF fan is operated only when periodic monitoring shows the concentration of PH3; has become uneven.

At the end of fumigation, residual phosphine must be removed from the bin. If the bin is not equipped with an aeration fan, the CLF fan can be used to purge phosphine by disconnecting the fan intake duct and introducing fresh air into the bin. This will push fumigant out through roof vents and eventually the PH3 concentration will drop to safe levels.

When designing a CLF system for a grain storage facility, the first step is to determine the appropriate flow rate of air/fumigant through the structure. The flow rate of the CLF system should provide several air exchanges per day in the bin to ensure good mixing. The CLF flow rate can be calculated by dividing the volume of air in the grain bin by the desired air exchange time. The volume of air in the bin includes the air in between the grain kernels plus the air in the headspace above the grain and in any aeration plenums. If a bin is only partially filled or has a large headspace, as in the case of some flat storage facilities, the air exchange times will be longer for a given flow rate because the grain is not displacing air in the bin.  For many bins, the headspace and plenum volume are small compared to the grain volume and can be ignored. In this case, recommended CLF airflow rates should be between 0.002 and 0.010 CFM/bushel of grain. These airflow rates result in air exchange times ranging between 4.2 and 0.8 hours respectively, as shown in Figure 2. These airflow rates are much less than recommended for aeration cooling of grain.  Low airflow rates reduce pressure differentials across the grain, thus reducing leakage.  Lower airflow rates also reduce capital and energy costs for the CLF system.

A simplified calculation, ignoring air in the headspace and plenum, can be used here because the bin is mostly full:

After the airflow rate is determined, the next step is to determine the fumigant circulation path through the structure. The direction of air flow is generally not important although flow from bottom to top through the grain is most common. For bins with an aeration plenum or ducts at the bottom, as shown in Figure 1, the fumigant circulation path is fairly straight forward because it usually makes sense to use existing equipment. In flat storage facilities or concrete silos without aeration, the design of the airflow path can be more challenging. The injection point(s) into the grain mass should be located geometrically opposite the gas exit point(s). A sufficient amount of perforated area is needed to allow the fumigant to freely exit the duct and enter the grain mass. The holes should be as large as possible, but not so large that grain falls through. For minimum pressure loss the total open area of the perforations should be one square foot per 300 CFM of airflow. If less open area is provided, an engineer should calculate the static pressure developed across the perforated duct.

In a concrete elevator the air/PH3 injection point can be through a manhole cover (Figure 3) or unloading spout (Figure 4) near the bin bottom. The fumigant can exit the silo at the top through either a manhole cover (Figure 5) or a vent fitted to accept the suction hose from the CLF fan. A concrete elevator typically has multiple grain bins. A single CLF fan can be connected to a distribution manifold (Figure 6 and Figure 7) that connects multiple bins. Individual bins can be isolated from, or connected to, the fumigation by opening and closing ball valves (Figures 3 and 4) at the entry and exit to each individual bin. These valves can also be used for pressure testing the ducts to detect leaks before fumigation. The CLF duct(s) from the top of the elevator to the bottom can either be routed through service shafts internal to the structure or on the outside. 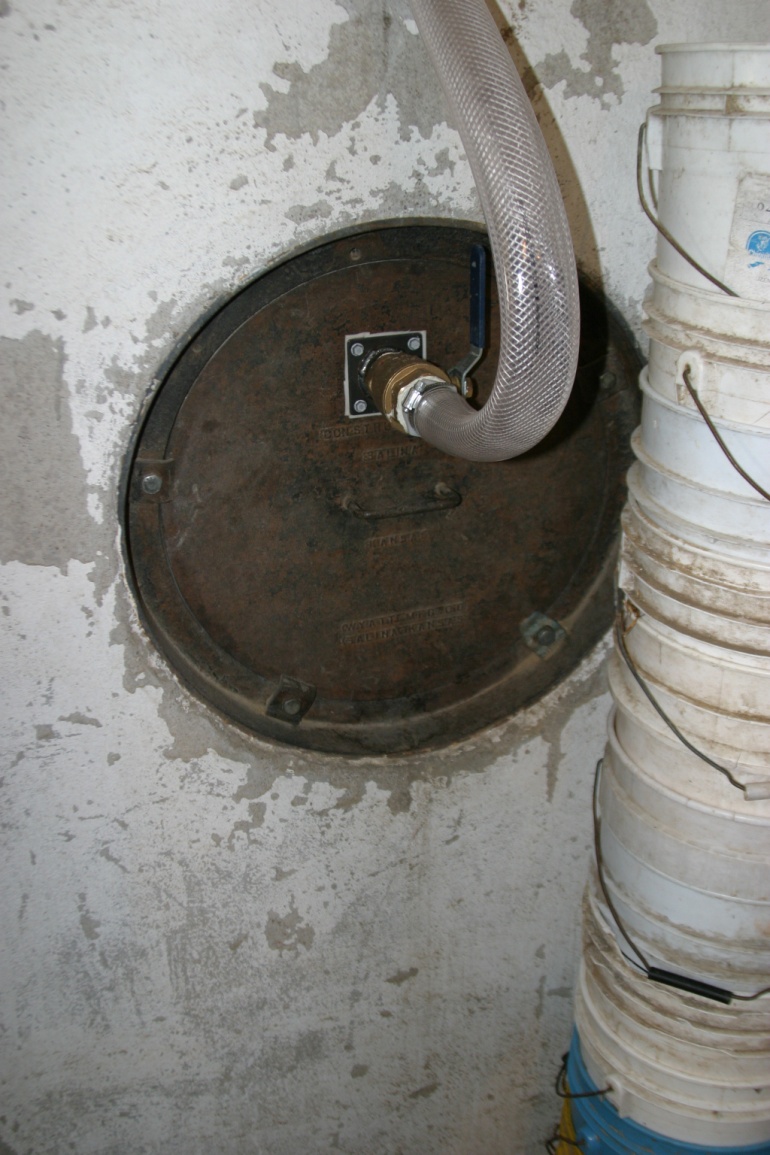 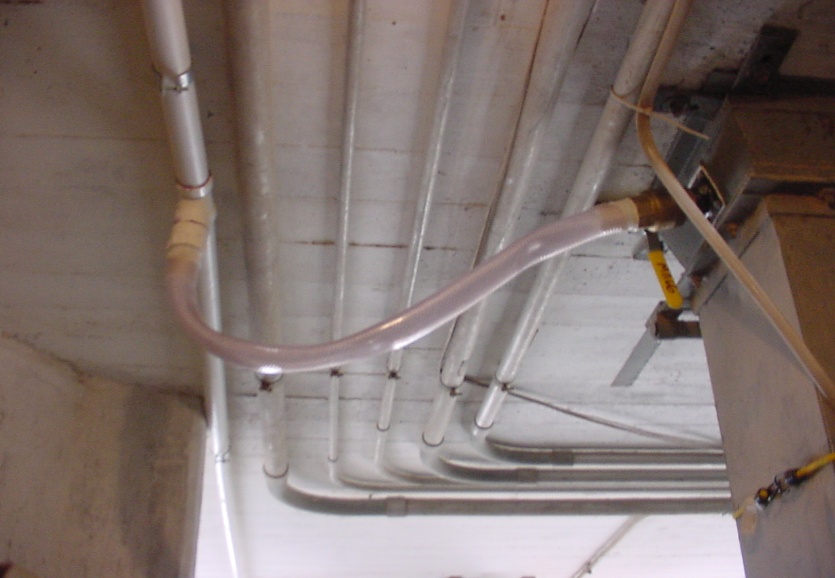 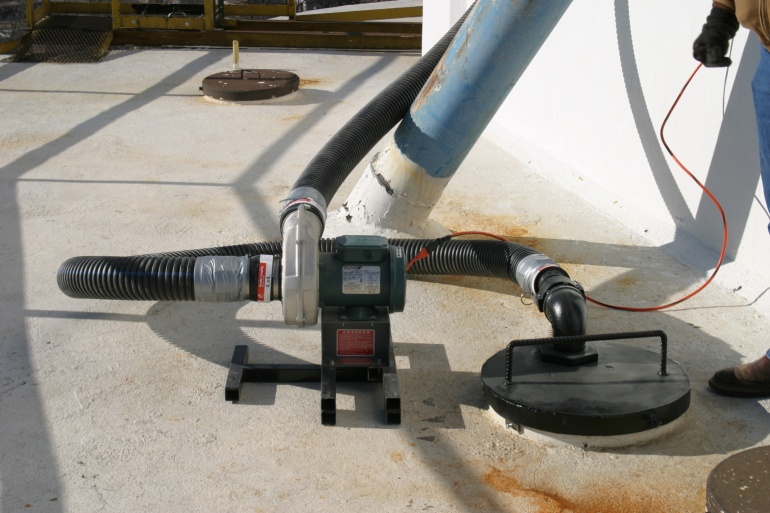 For flat storage, injection of air/PH3 can be through perforated ducts buried at the bottom of the grain. The fumigant exits these ducts and then moves up through the grain into the headspace of the structure to be recaptured and recirculated by the CLF fan. Multiple injection locations are required for large flat storage structures to decrease the time required to evenly distribute phosphine. Spacing between injection points should be no more than the depth of the grain. Distance from the sidewalls to the nearest injection point should not exceed one half the grain depth.

Permanently mounted CLF ducts can be made from PVC pipe anchored to the structure’s walls with commercially available pipe hangers (Figure 6). A wide variety of fittings, valves and attachment hardware are readily available for schedule 40 PVC pipe for routing ducts around obstructions and making distribution manifolds (Figure 7). Black plastic corrugated drain hose in 3-inch, 4-inch, and 6-inch diameters can be used where temporary flexible connections are required (Figure 5). For smaller diameter flexible connections, reinforced hoses can be used (Figures 3 and 4). Exposure to ultraviolet light from the sun can degrade PVC and other plastic duct materials over time. If this is a concern, the duct can be covered or painted per the manufacturer’s recommendations. 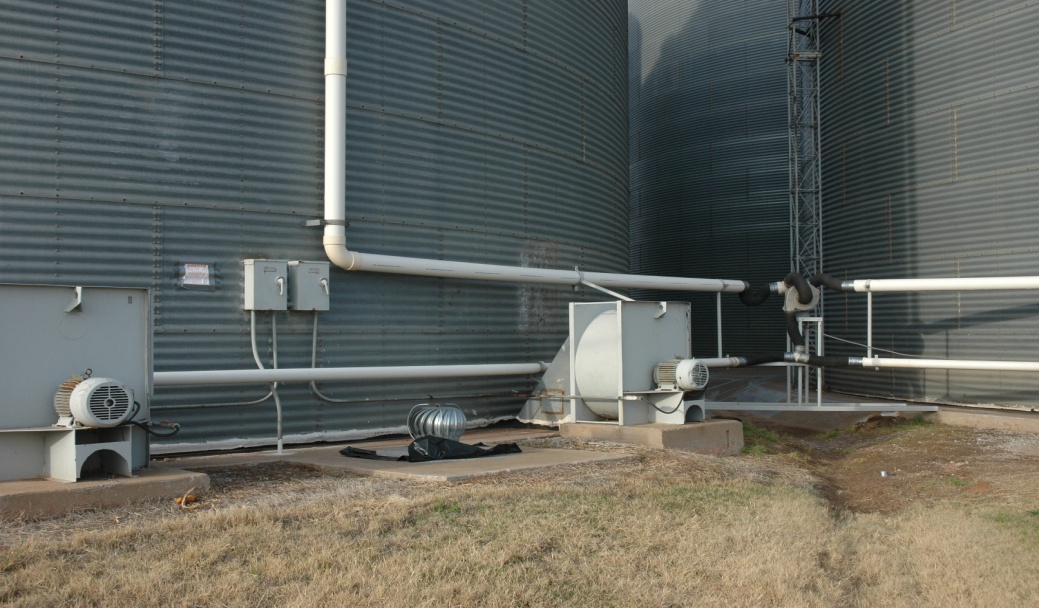 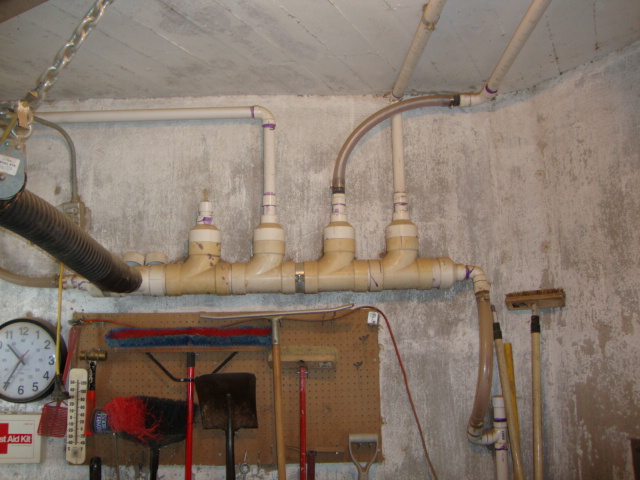 If the fan and other electrical components are located inside the bin or head house they must conform to explosion-proof design criteria. Mounting them outside in open air away from explosion hazards (Figure 5) can save on installation costs, but this may make duct routing more difficult and require shielding from the weather.

If the CLF system will be used to purge the bin at the end of fumigation, provisions in the duct system should be made to vent residual PH3 in a safe area. Furthermore, personnel should not have to enter hazardous areas to operate valves or other controls when purging bins.

Ducts should be sized to minimize cost of the entire CLF system. Smaller ducts have lower material costs and require less labor to install. However smaller ducts result in higher air velocities to get the desired airflow rate. Increased velocity increases resistance to airflow which in turn increases the power and cost of the fan.

The CLF fan must be a sealed fan so phosphine gas does not leak out around the motor shaft. Plastic or aluminum blades and housings are recommended to reduce sparking potential and are chemically resistant to PH3. Centrifugal fans are the most common form of fan for CLF systems. These fans typically work most effectively for static pressures less than 12 inches of water.

Once the flow rate and static pressure are known, consult fan manufacturer datasheets to select a fan for the application. An estimate of the horsepower of the fan can be obtained using the following equation:

Thorough sealing of a grain bin is important for all fumigations.  All openings in a bin: access hatches, ventilation openings, filling spouts, and unloading augers should be sealed.  In addition, cracks and gaps in the walls and roof, seams, and joints should also be sealed to prevent fumigant from escaping.

There are several ways to identify leaks in a grain bin.  Smoke from a smoke generator inside the bin will escape through leaks in the bin. On a windless day, the escaping smoke can be used to identify leaks. Light entering the darkened interior of a bin through gaps and cracks is another way to identify leaks.  A pressure test can be used to estimate the leakage rate of a bin, and in some cases, locate leaks. It is always better to discover and correct leaks before starting fumigation.

Sealing of grain storage facilities can be divided into permanent and temporary sealing.  Permanent sealing can remain on the bin at all times.  It includes sealing around the base of the bin, aeration fan motor connections and ducts, seams and holes due to missing hardware, and the unloading equipment auger, drag conveyors etc.  Permanent sealing conserves fumigant and also excludes insects and water from entering the structure between fumigations.  Materials for permanent sealing include caulking, expandable closed cell foam, and wood, plastic and metal barriers.

Temporary sealing occurs at time of fumigation and is removed when the fumigation is complete to allow routine access to the bin and grain.  It is typically done at the aeration fan intake, bin entry doors, manholes, top ventilation openings and the downspouts and auger entry points. Materials for temporary sealing include 6 mil polyethylene film, duct tape and spray adhesive. Figures 15 through Figure 19 illustrate application of these materials in preparation for a fumigation. 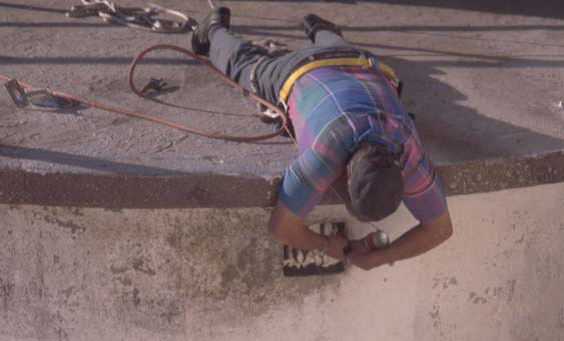 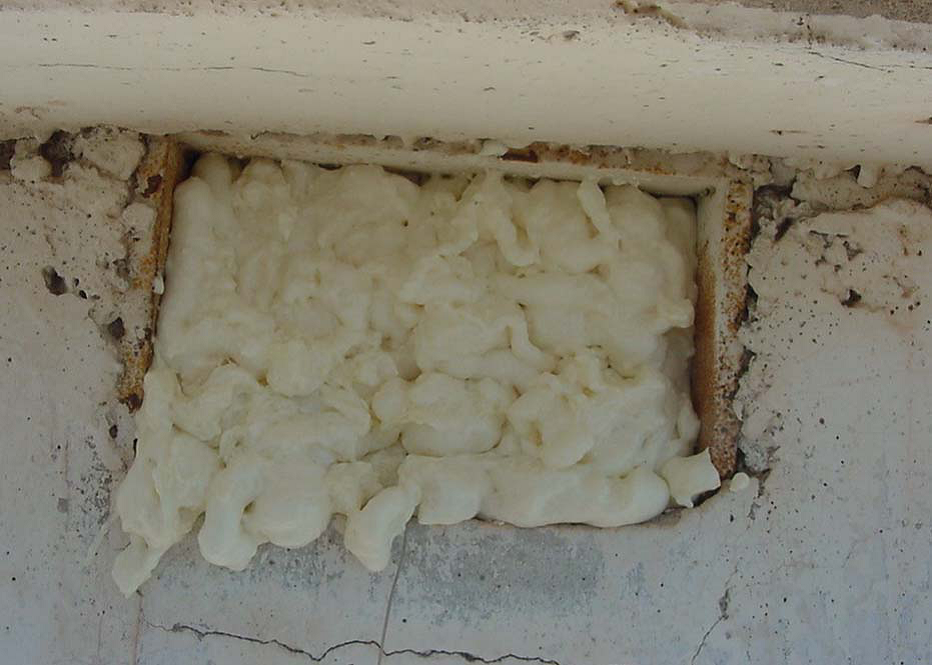 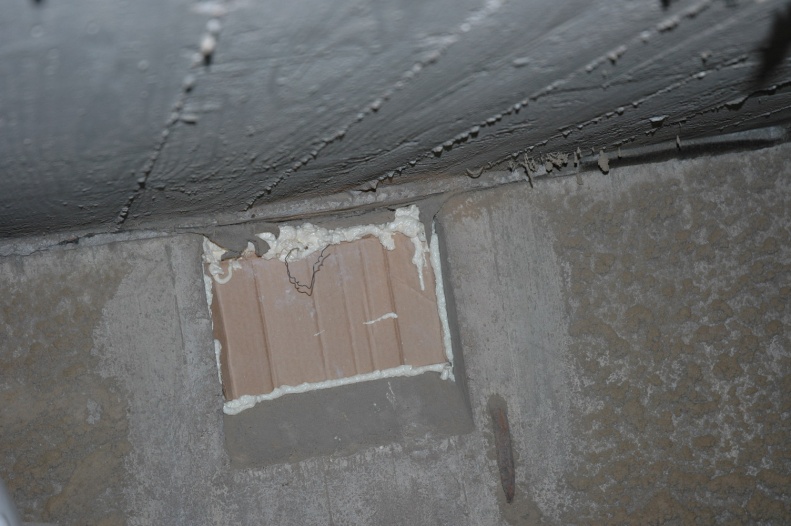 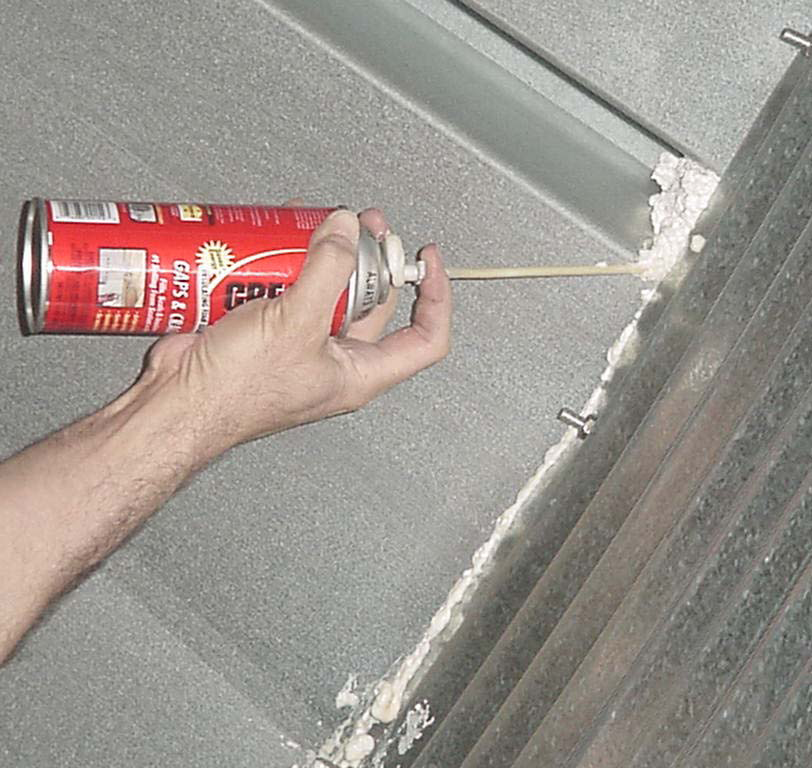 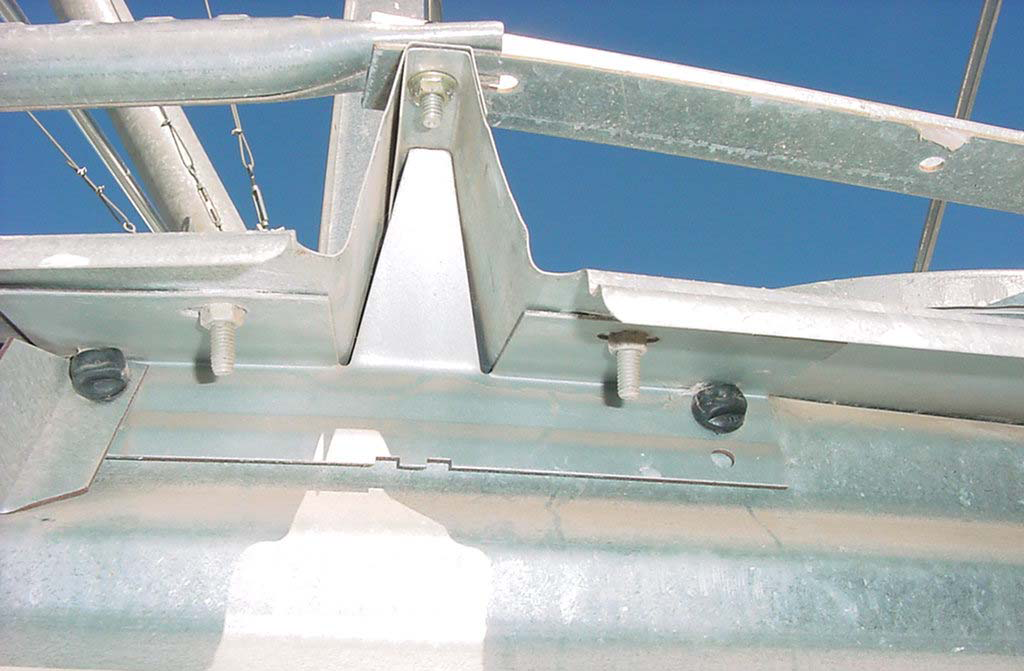 Figure 10. Roof panel stiffening rib fitted with a metal plate. Caulk cracks around the edges of the plate from inside or outside the bin. 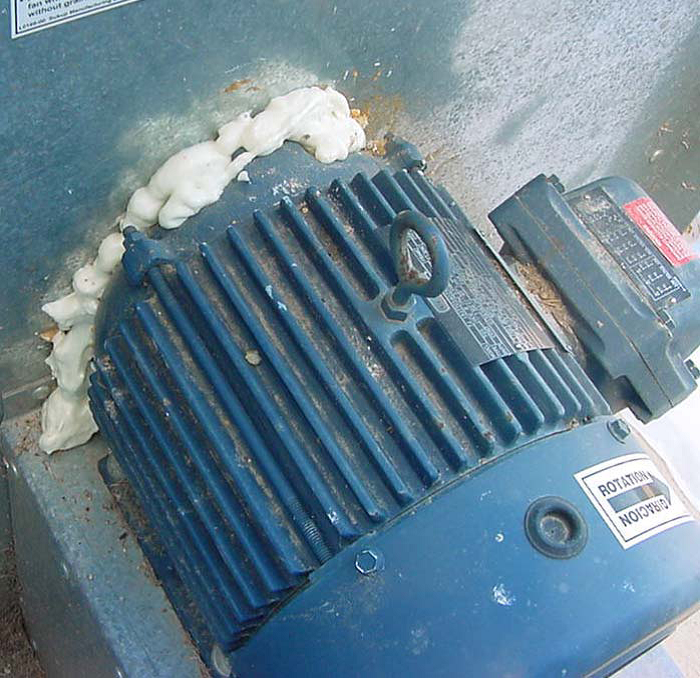 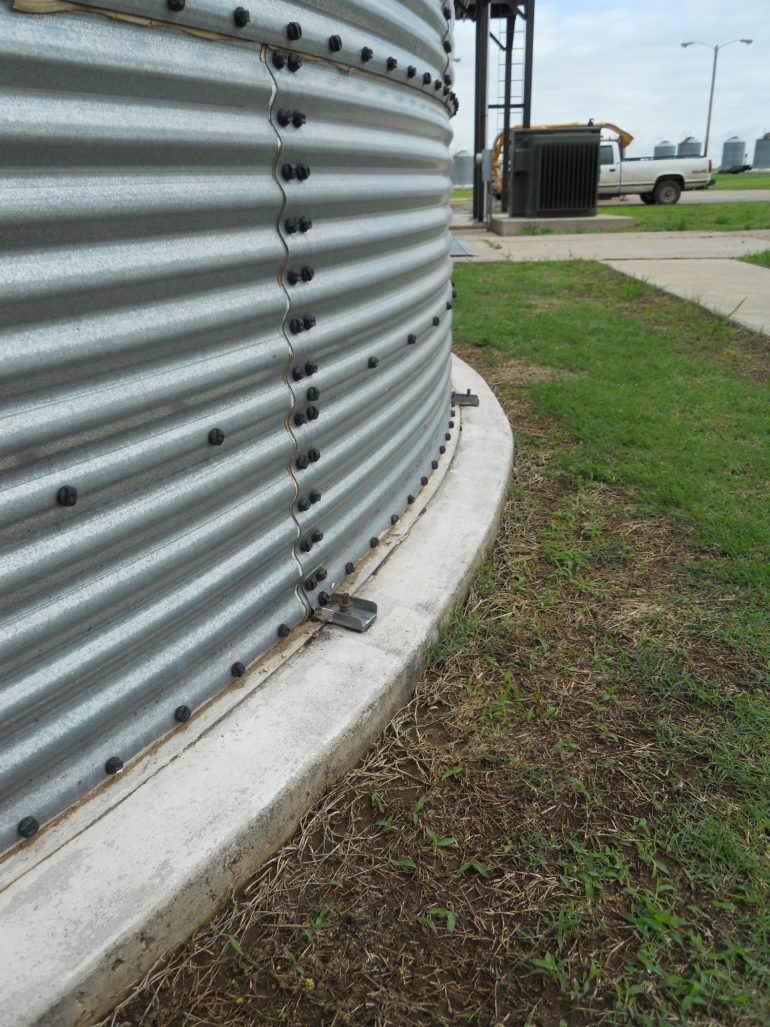 Figure 12. Base of bin sealed with elastomeric sealant. 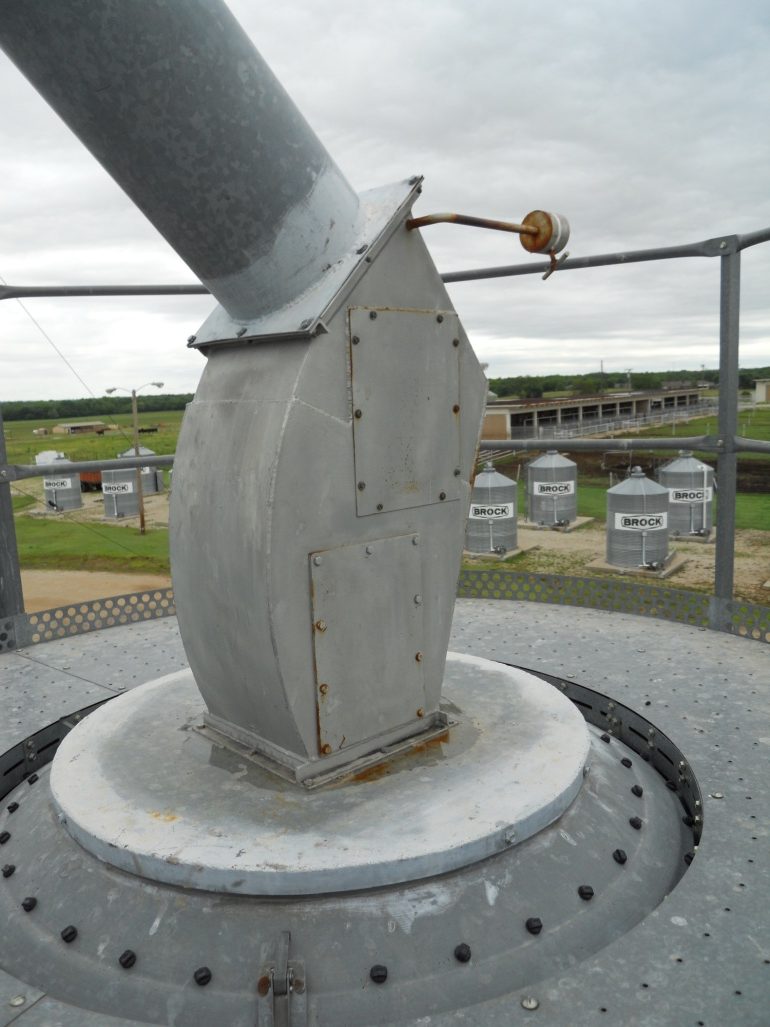 Figure 13. Fill spout equipped with a self-closing door to reduce leakage up the leg. Seam where fill spout attaches to top of the bin needs to be caulked also. 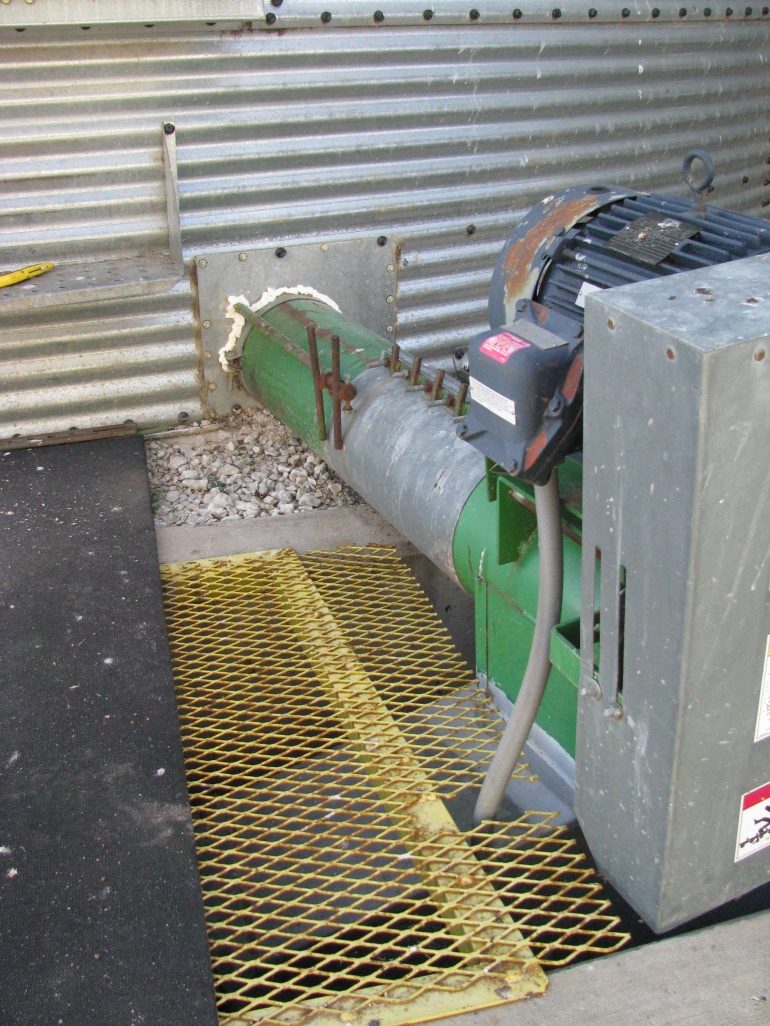 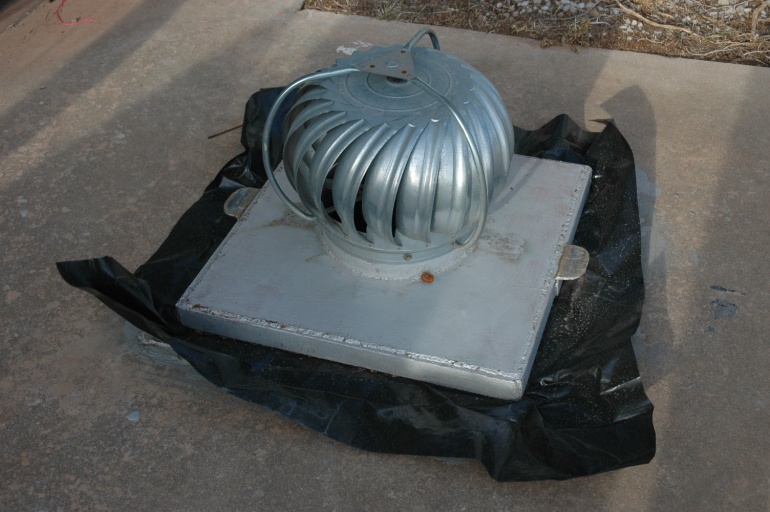 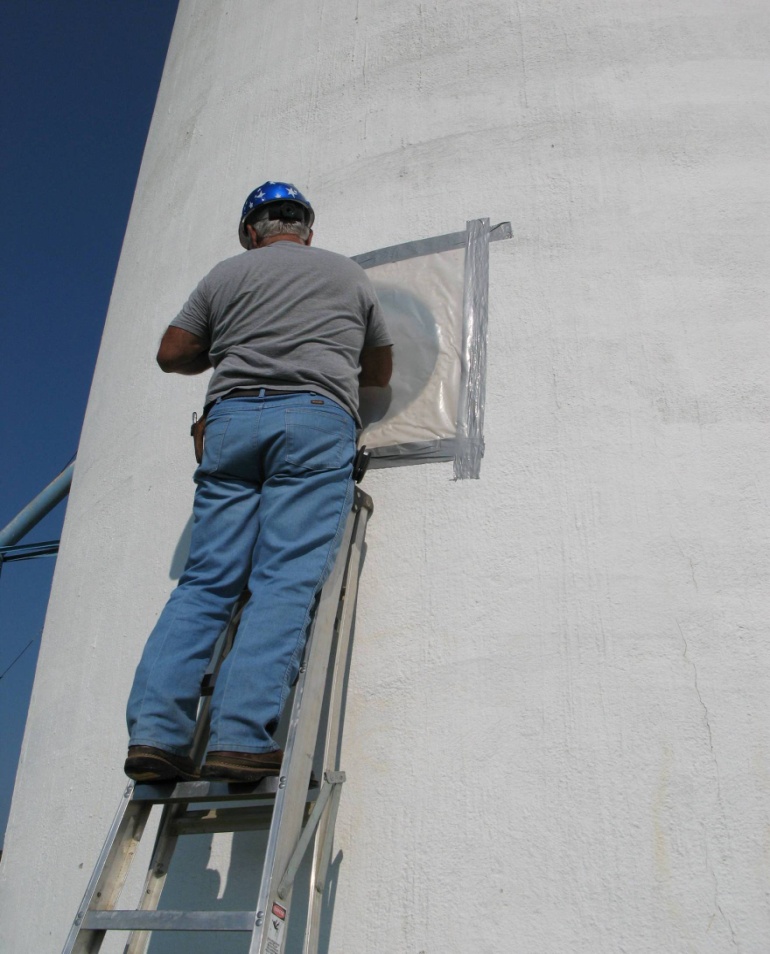 Figure 16. Temporary sealing of hatch on concrete silo prior to fumigation. 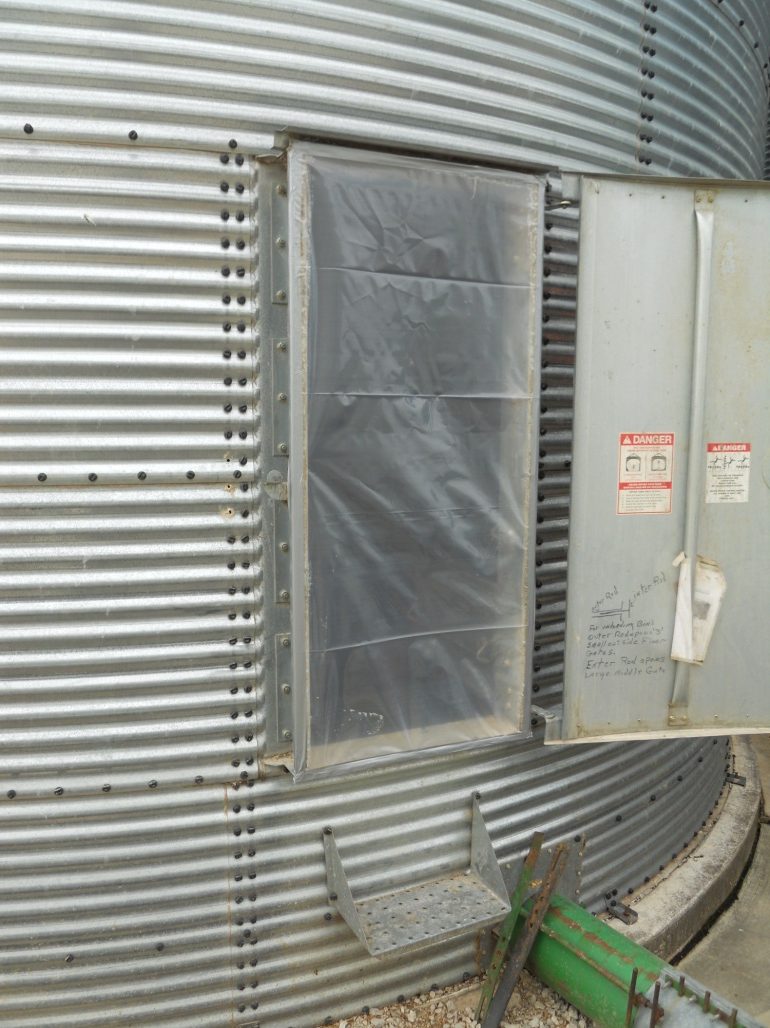 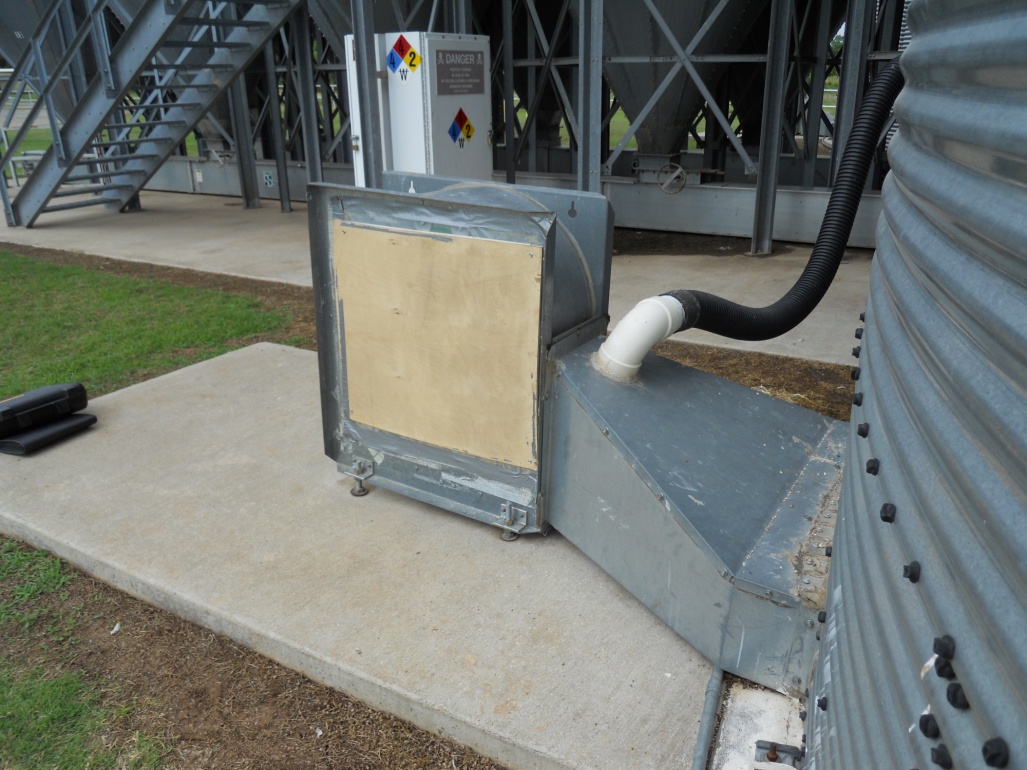 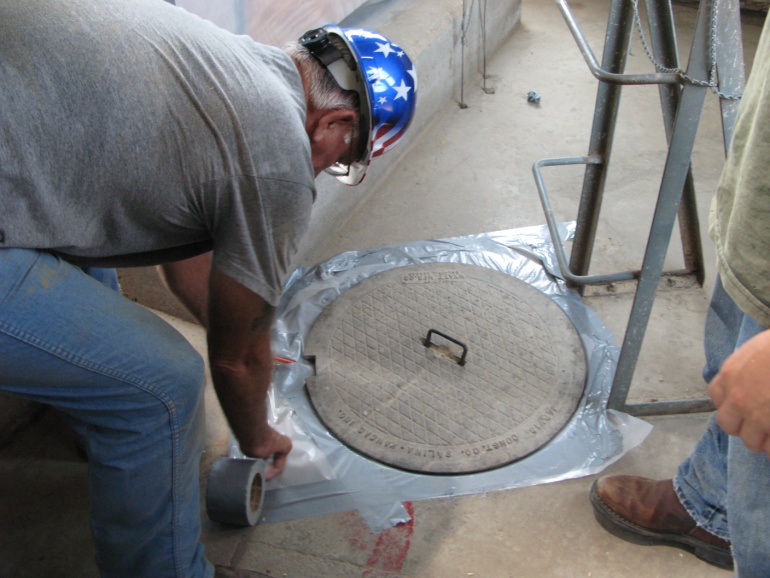 Fumigation is only to be conducted by specially trained and licensed personnel.  It is important to follow all label requirements for all fumigations.  All fumigations must be carried out using industry standards and regulations.  Extra cautions with CLF systems: