Corn grain is used in beef cattle production because of its advantages in improving the efficiency of growth1. However, corn grain typically does not make up a large portion of cattle diets until the end of their life cycle in a period called “finishing,” when cattle are often housed in a feedlot (Figure 1). The majority of a beef animal’s life in the U.S., regardless of whether they are grain- or grass-finished, will be spent on grass consuming forages (whole plants). Depending on the region of the country and the prices and availability of different feeds, corn grain may make up 60 to 85 percent of a grain-finished animal’s diet during the finishing phase. The other 15 to 40 percent of the animal’s diet will be made up of forages or roughages (e.g., hay), byproducts (e.g., distiller’s grains) and minerals and vitamins. In addition to improving growth efficiency, corn grain is fed to cattle in the finishing phase because it increases carcass quality grades by increasing fat deposition (especially intramuscular or “taste” fat), which results in a more desirable product for consumers. Cattle on grass, including grass-finished beef, also can require supplementation of energy or protein dense feeds that may contain corn grain to meet their nutrient requirements when the nutritional quality of the grass is low.

While the diet provided to finishing cattle in feedlots relies on some human-edible inputs (i.e., corn grain), the forages and byproducts fed to cattle throughout their lives are largely inedible to humans2. For example, once the entire lifetime feed intake of cattle is accounted for (meaning all the feed they consume from birth to harvest), corn accounts for only approximately 7 percent of the animal’s diet3. The other 93 percent of the animal’s lifetime diet will consist largely of feed that is inedible to humans, thus not in direct competition with the human food supply. Unlike humans, cattle can efficiently digest fiber and convert previously human-inedible feeds into nutritious, human-edible foods. 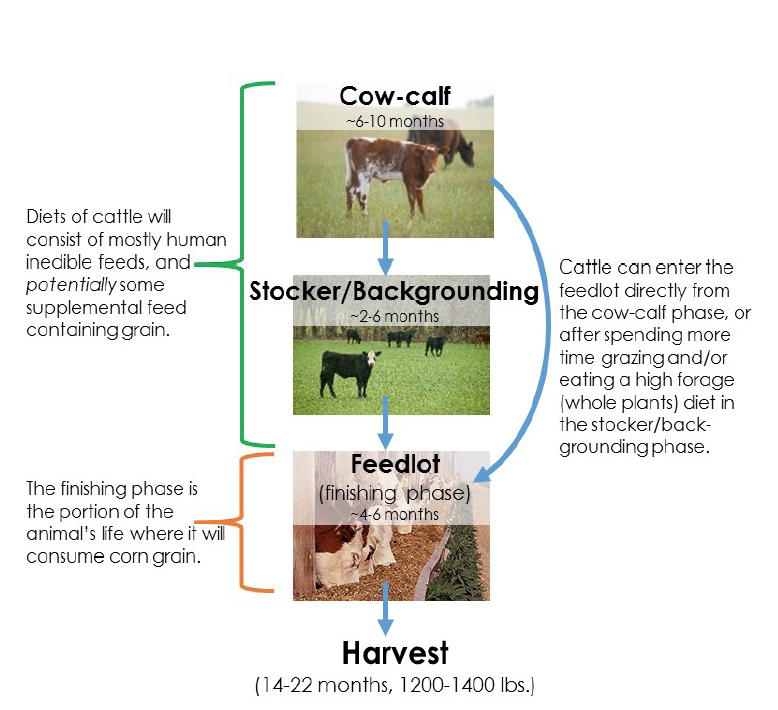 One of the major human inedible byproduct feeds fed to beef cattle is distiller’s grains, which is a byproduct of alcohol production from corn (either for fuel or human consumption). The amount of distiller’s grains fed to beef cattle has increased in recent years as the production of fuel from corn has increased. As Table 1 demonstrates, the proportion of corn used for fuel production in the U.S., relative to animal feed, has dramatically increased in recent years. In contrast, the percentage of corn used for human food has remained relatively unchanged.

Table 1. Domestic uses of U.S. corn grain as a percentage of total domestic use in recent decades.

Using recent data as a guide, one can predict that land used to grow corn for animal feed would likely be shifted to grow corn for fuel use if less corn grain were fed to beef cattle, and would not shift towards human consumption. Altering the lifetime consumption of corn grain by cattle, which is only approximately 7 percent of an individual animal’s total lifetime feed intake3, would likely have a very minor impact on the sustainability of land use.

Corn production, like all crop production, does have an environmental sustainability impact. Thus, reducing corn’s environmental impact through better production practices and using new technologies would improve land use sustainability regardless of the corn’s end use (human food, animal feed, or fuel). Such improvements include no-till or conservation tillage practices to reduce soil erosion and increase soil organic carbon4, the use of winter cover crops to reduce nutrient run-off5, and using precision agriculture techniques to apply fertilizer at variable rates across field to minimize nutrient emissions to the environment while improving corn yields. Indeed, past improvements in crop yields, including corn, have contributed to reducing environmental impacts per unit of beef 12% from 1970 to 20117.

Regardless of the type of beef production system, the majority of beef cattle’s nutrient requirements over a lifetime are met with human inedible feeds. Only 7 percent of beef cattle’s lifetime feed intake is corn grain. Improvements in corn production efficiency (minimizing environmental impacts relative to corn yield) will help improve sustainability regardless if corn is used for human consumption, beef cattle consumption, or fuel use.