There is a “platoon” of armyworms that can attack the winter wheat. These caterpillars get their names because they tend to march out of a field en masse as their food source dwindles. The four most common armyworms occurring in Oklahoma winter wheat include the armyworm, army cutworm, fall armyworm and wheat head armyworm.

Description and Life History: The armyworm is sometimes called the “true armyworm” to distinguish it from the other armyworms. Adult moths are uniformly pale brown to grayish brown, with a wingspan of 1.5 inches (Figure 1). Each forewing has a white spot near its center. Mature larvae measure 1.5 inches long, are smooth skinned with a dark gray to greenish-black body (Figure 2). The most distinguishing feature on this caterpillar is the presence of five stripes extending lengthwise along the body; three on its back, and one on each side. 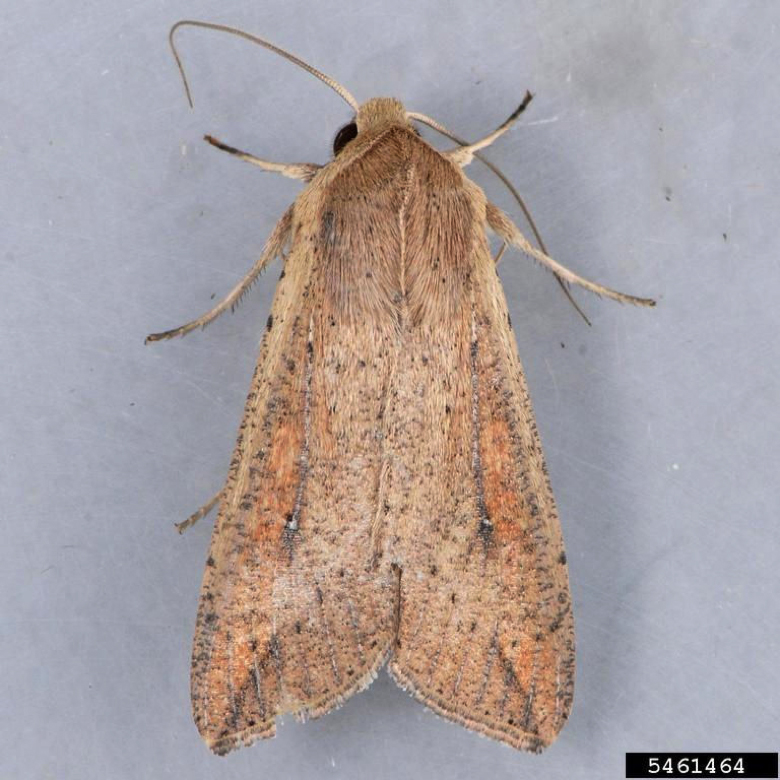 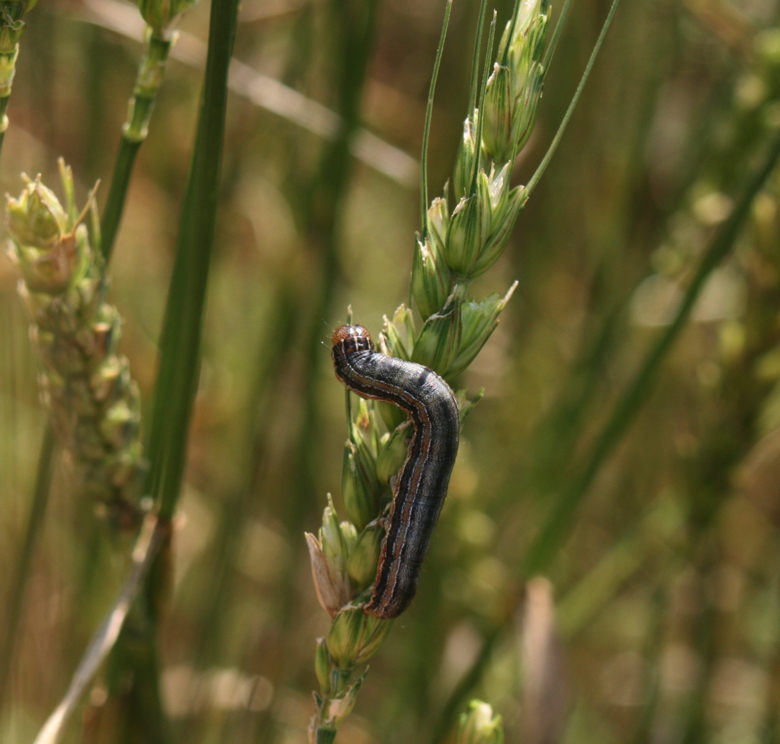 Oklahoma usually experiences several generations of armyworms in a given year, but only one is normally of concern for winter wheat production. The last fall generation of armyworms overwinters as partially grown caterpillars in grass pastures or on grassy weed hosts, and pupate in the soil in late winter. Adult moths emerge in early spring (late March and April) and lay eggs in wheat fields.

Damage: Small larvae skeletonize the surface of leaf blades and the inner surface of the leaves. As they grow, they will consume entire leaves, and feed on the beards of emerged wheat heads (Figure 3). The most obvious direct damage to the wheat head is “head clipping,” when caterpillars chew completely through the stem and the head falls off the plant (Figure 4). While head clipping is a problem in barley, it is rarely so in winter wheat because they normally clip secondary heads that will not contribute to grain yield. However, a heavy population may destroy the leaves and/or beards after a few nights of feeding, causing indirect yield loss if the wheat has not reached soft dough growth stage (Feekes 11.2). 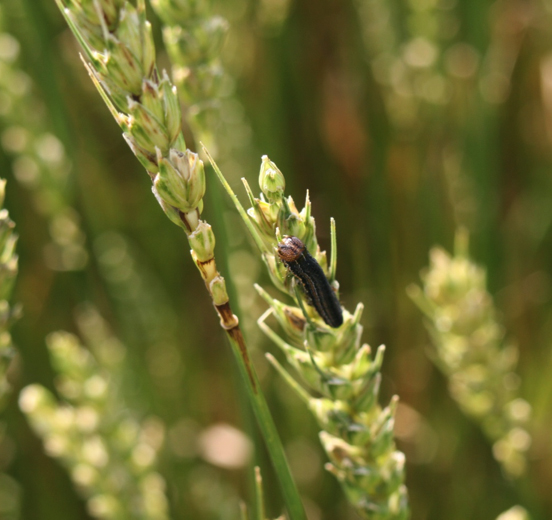 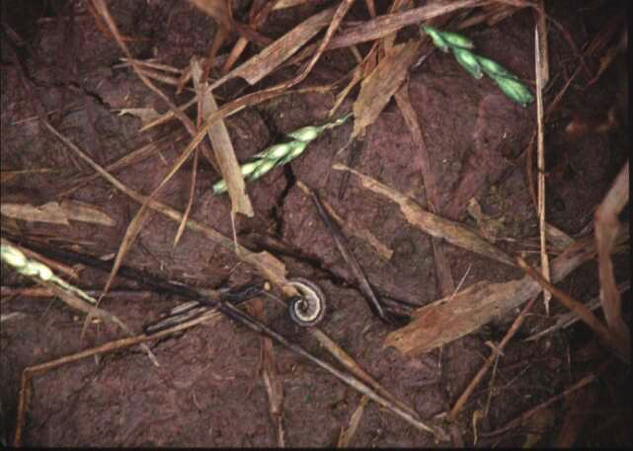 Scouting and Management: Armyworms hide during the day and feed on the leaves and heads at night. Heaviest infestations are usually found near low-lying areas of rank growth or where plants have lodged. Look for this insect under debris at the base of plants. Consider scouting at night with a flashlight. The presence of frass (feces) and dropped plant material indicates active feeding. When scouting, check several locations within the field and take an average of worm counts. Examine caterpillars closely for size and the presence of small white eggs attached to their neck, just behind the head capsule, which are produced by a fly parasite. Also inspect the ground and note whether dead caterpillars are covered with white or yellow cocoons that look like the cotton ends of a Q-tip® (Figure 5). These are probably the pupae of Glyptapanteles militaris, a parasitic wasp. The treatment threshold is four to five unparasitized armyworms per linear foot of row. 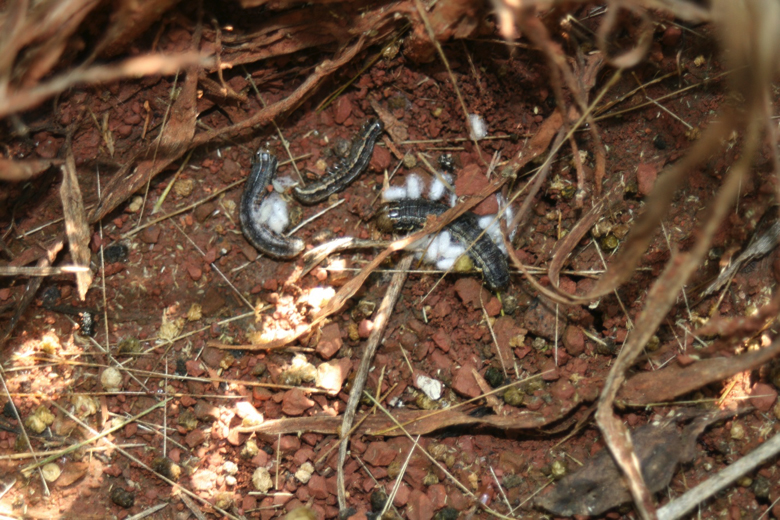 Description and Life History: Army cutworm is an erratic pest of small grains in Oklahoma, but can cause widespread losses during outbreak years. Adult moths have a wingspan of 1.5 to 1.75 inches. The forewings are dark gray-brown with multiple distinct markings (Figure 6). The hindwings are gray-brown with a white fringe. Larvae are pale greenish gray to brown with a pale gray stripe on its back, and will grow to 1.5 to 2 inches.  When disturbed, they exhibit the typical behavior of curling into a tight “C” shape (Figure 7). 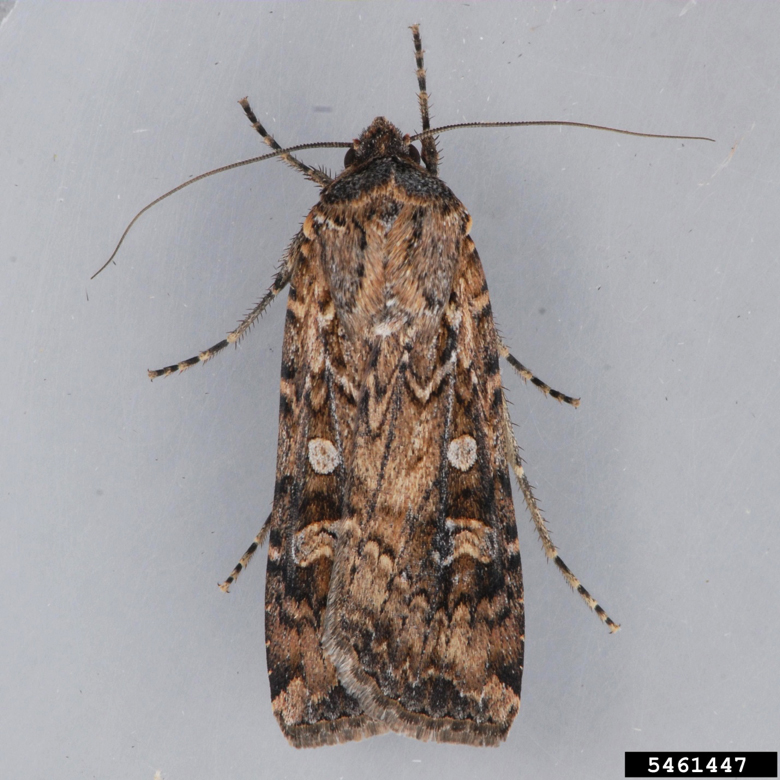 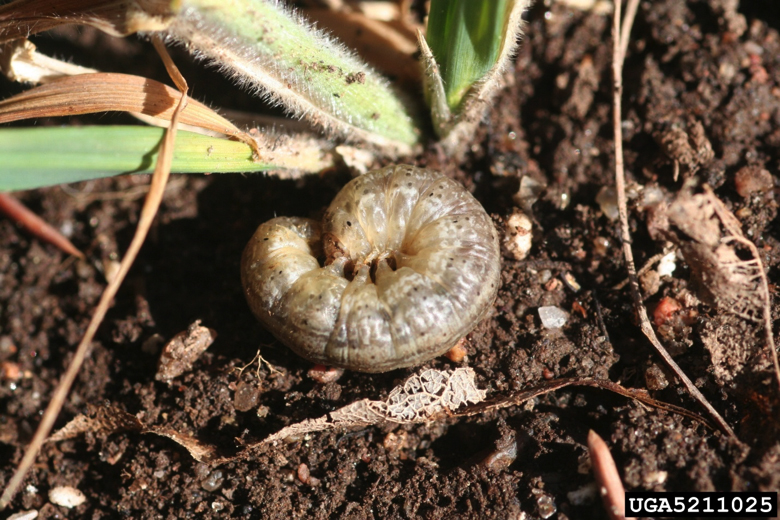 Army cutworms produce one generation per year. Army cutworm moths migrate east and south from mountainous summering grounds in the fall to lay eggs, preferring to deposit them on bare soil or under dirt clods. Eggs hatch and larvae feed on new plant growth in the fall and molt one to three times before cold weather slows their growth. Larvae overwinter in the soil and can survive extreme cold weather. They intermittently feed when temperatures warm at any time during winter, and feed continuously as soil temperatures warm in spring. Army cutworms molt seven times after hatching and pupate in soil sometime in April. Moths emerge in May and migrate to the Rocky Mountains to spend the summer, where they feed and become sexually mature. Moths begin their fall migration to the Great Plains in September.

Damage: Army cutworms get their name because they feed at the base of plants, separating the top of the plant from its roots at the crown base. They can cause direct stand loss or plant growth to be delayed because they are only partially attached to their roots. Infested fields often seem to “slowly disappear” as army cutworms feed and grow (Figure 8). 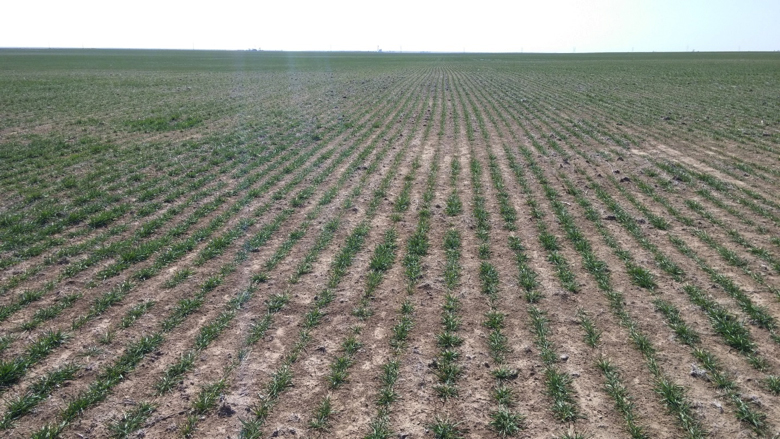 Scouting and Management: Fields should be checked regularly for army cutworms, especially during dry winters when the wheat is stressed. Inspect fields by digging or stirring the soil to a depth of two inches and counting exposed cutworms. Focus sampling efforts on “hot spots” in the field, but make sure to take representative samples of the whole field before making a treatment decision. While wheat plants may recover from feeding, yields may be reduced. The suggested treatment threshold is two to three army cutworms per linear foot of row (in small and water stressed wheat), and four to five if the wheat has adequate water and is growing vigorously.

Description and Life History: Fall Armyworm moths have a wingspan of 1.5 inches; male moths have dark gray front wings mottled with darker and lighter splotches and a prominent pale, diagonal marking near the center of the front half of each wing and a prominent white spot at the extreme tip (Figure 9). The front wings of the female moths are dull gray-brown with inconspicuous markings. Mature caterpillars are 1.5 inches long and brown, green or black (Figure 10). The head capsule is mostly black and marked with a prominent inverted white Y- shaped line on the front of the head. 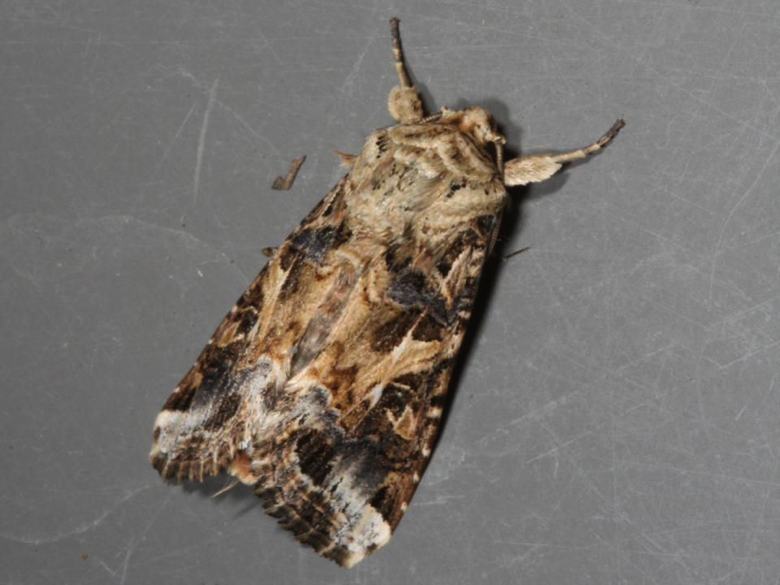 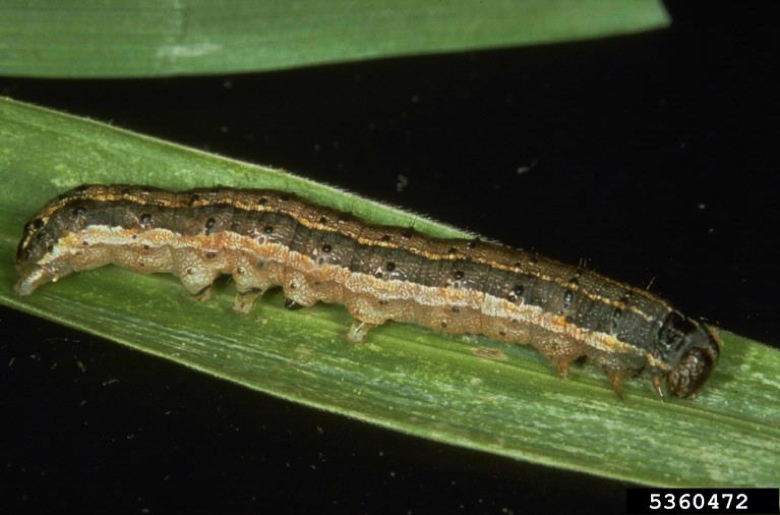 The fall armyworm does not overwinter in Oklahoma. They overwinter in south Texas and Mexico and migrate northward as populations build. They are found in wheat from September through frost, and are capable of injuring seedling wheat plants. Eggs are laid at night on grasses or other plants and hatch within two or three days. Caterpillars mature in three weeks, and there are several generations in Oklahoma each year.

Damage:  Young larvae will not chew completely through a leaf leaving a window pane-like injury (Figure 11). This “windowpaning” is an early sign of an infestation and should be noted while scouting. As they get larger, they chew young seedlings to the ground, causing delay in greening up or reducing stand. In larger wheat, they reduce leaf canopy, delaying wheat growth. 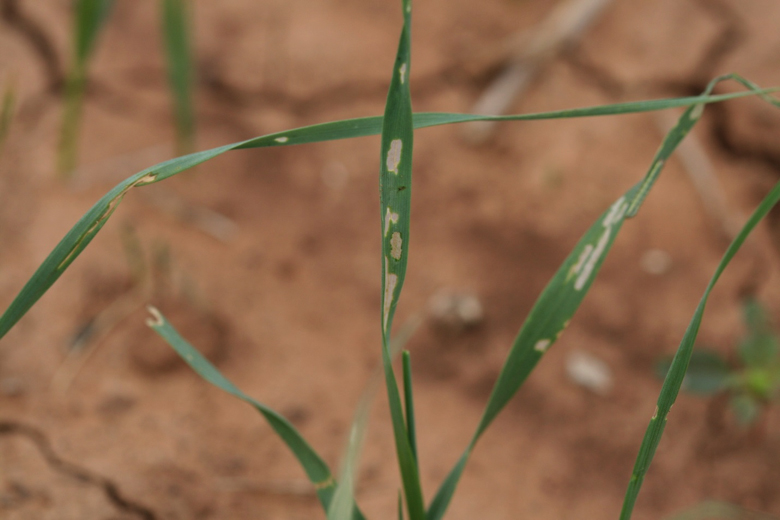 Scouting and Management: Fall armyworms sporadically occur in large enough numbers to cause economic injury, but early planted fields are at greatest risk. When scouting, it is important to check the interior of the field as well as the field margins. This insect is often more numerous along field margins and a perimeter insecticide treatment may be all that is needed.

Description and Life History: Wheat Head Armyworm moths are yellowish brown with a dark brown streak running the length of the forewing that is interrupted near the middle of the forewing (Figure 12). The caterpillars range in color from gray to greenish with a distinct yellow, white and brown stripes going lengthwise across the body. They typically have a larger head relative to their body (Figure 13). 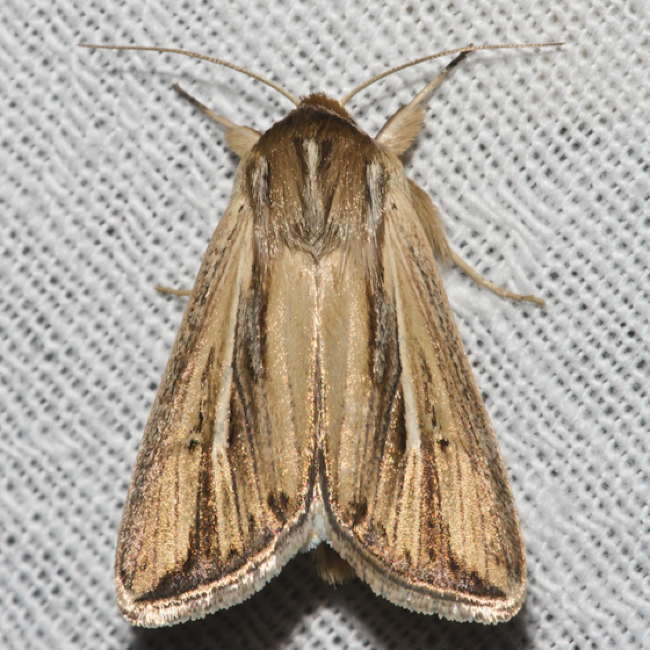 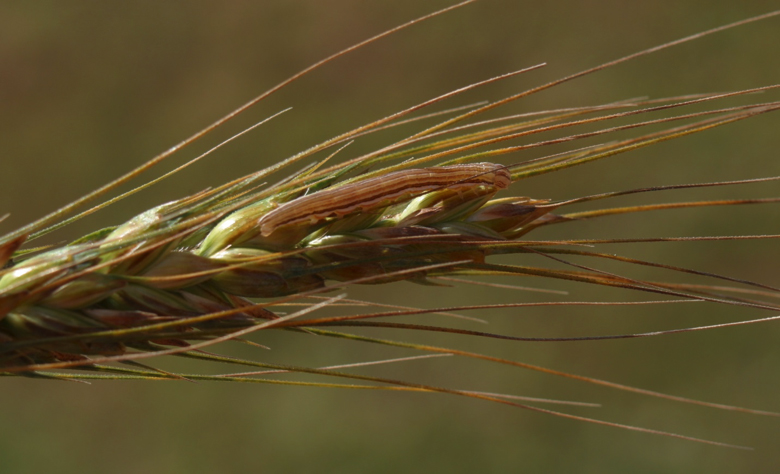 Wheat head armyworms go through two generations each year, and pass the winter as pupae in the soil. Adult moths lay eggs on wheat in the spring, and the larva feed directly on grain heads, mostly at night. The next generation feeds on warm season summer grasses.

Damage: Wheat head armyworms feed on developing wheat kernels, causing direct damage to the seed (Figure 14). The major issue with wheat head armyworm damage has to do with the grain grading, which is classified as IDK (Insect Damaged Kernels). Grain elevators will dock wheat when samples contain 6 to 31 damaged kernels per 100 grams of seed. To coincide with the Food and Drug Administration’s defect action levels (the U.S. Standards for Wheat), consider wheat containing 32 or more insect-damaged kernels per 100 grams as U.S. Sample Grade. This grain is unfit for human consumption and can only be sold as animal feed. It is important to note that although the wheat is damaged, it is not an indication of an on-going infestation of grain weevil or some other stored grain insect pest. 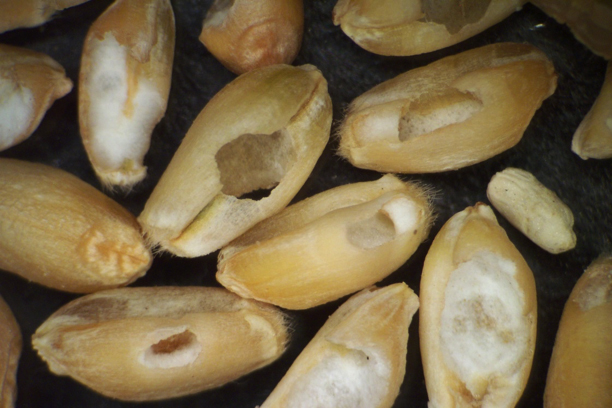 Scouting and Management:  The body color of the wheat head armyworm caterpillar blends well with the developing wheat head, making it difficult to see by casual observation. Fields can be scouted with a sweep net to determine numbers of caterpillars. There is no established treatment threshold because wheat head armyworm rarely causes economic damage and when it does, the damage is usually not noticed until the grain is harvested. If wheat is at soft dough (Feekes 11.2), consider treating the field to reduce damage. This insect often is found along the margins of fields, so if scouting shows that they are restricted to the field edges, consider spraying the field margins with a border spray. Pay careful attention to pre-harvest intervals when selecting an insecticide.

The best strategy to manage the problem at harvest is to blend wheat harvested from head rows with wheat harvested from the rest of the field to dilute IDK percentages. Treating a field with insecticide at harvest will be of little help because the damage is already done, most of the caterpillars have already pupated and remaining larvae can’t feed on the mature wheat grain.

If field inspections for any of these armyworms indicate the need for chemical control, current insecticide recommendations are listed in EPP 7194, “Management of Insect and Mite Pests of Small Grains.”