Sorghum has been a major commodity in Oklahoma for several decades. Growers in the state have overcome many challenges throughout the years, especially greenbugs and Johnsongrass. To overcome these challenges, growers implemented successful integrated pest management (IPM) strategies. With sugarcane aphids as the next major challenge facing Oklahoma grain sorghum producers, growers must evaluate and utilize these IPM practices to successfully control this pest.

Hybrid selection is probably the most effective and cheapest way to help manage sugarcane aphids. During the last several years, many hybrids have been identified with varying degrees of tolerance to sugarcane aphids. Below is the current list of tolerant sorghum hybrids that have been both proven in university trials and commercially available (Table 1).

Depending on the company, these will be listed as either resistant or tolerant hybrids. When it comes to sugarcane aphids in grain sorghum production, these are being used as synonymous terms. However, it should be noted that there are multiple forms of resistance/tolerance in grain sorghum resistance/tolerance, from non-preferential feeding to yield sustainability even with infestation. In addition, the term resistance is note similar to that used for weed resistance. For these hybrids, resistance does not denote complete immunity, but some level of security to the pests.

While selecting a tolerant hybrid is one of the most effect management practices for controlling sugarcane aphids, it is only the first step. Timely planting can be argued as the most important overall agronomic practice for a successful grain sorghum crop in Oklahoma as this greatly improves sorghum yields. The major contributing factor to this is trying to avoid sorghum flowering and grain fill during sub-optimal times of the year (i.e. end of July to the beginning of August). Outside of the panhandle, the optimum time for planting sorghum is typically from early April through early May. The further into May at planting, the more at risk they are to pairing flowering or grain fill during hot, dry conditions. In some years, mid- to late-May planting dates will produce adequate yields; however, the risk associated is typically much higher compared to earlier planting. Recent work at Oklahoma State University (with multiple locations across northwest Oklahoma) documented a nearly 30 percent decrease in crop yield associated with mid-May plantings compared to those in mid-April.

The benefits of earlier planting also extend into helping manage sugarcane aphids. With earlier planting dates, growers expect the crop to reach the later stages of soft dough or hard dough prior to infestation. This makes these pests only a minor yield limitation compared to infestations at earlier growth stages. The aphids will still have to be managed at harvest, but final yield is less impacted.

If growers could not plant during the month of April, it was advised to delay planting until June during the traditional double-crop period. However, there is typically a higher population of sugarcane aphids at these later planting dates, making delayed planting a much riskier practice. By the time the crop has reached the critical reproductive stages, sugarcane aphids will have built up their populations on full-season sorghum, and heavy infestations will have a stronger impact on these younger (already highly stressed) plants. This does not mean double-crop production is not worth considering, but other critical management practices (i.e. tolerant hybrids and timely chemical applications) become more critical than with full-season production systems. 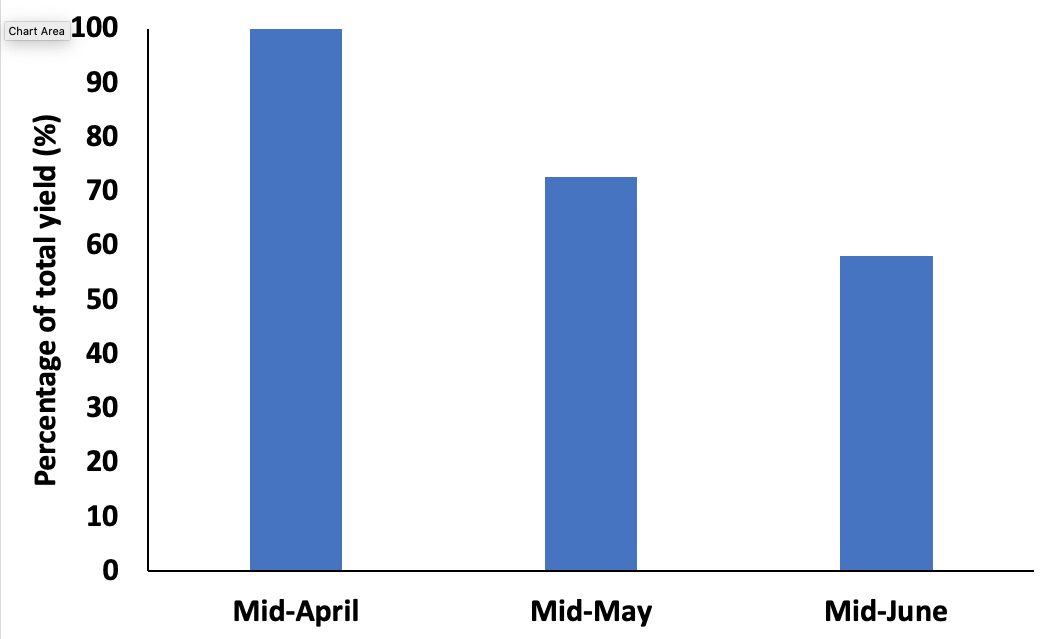 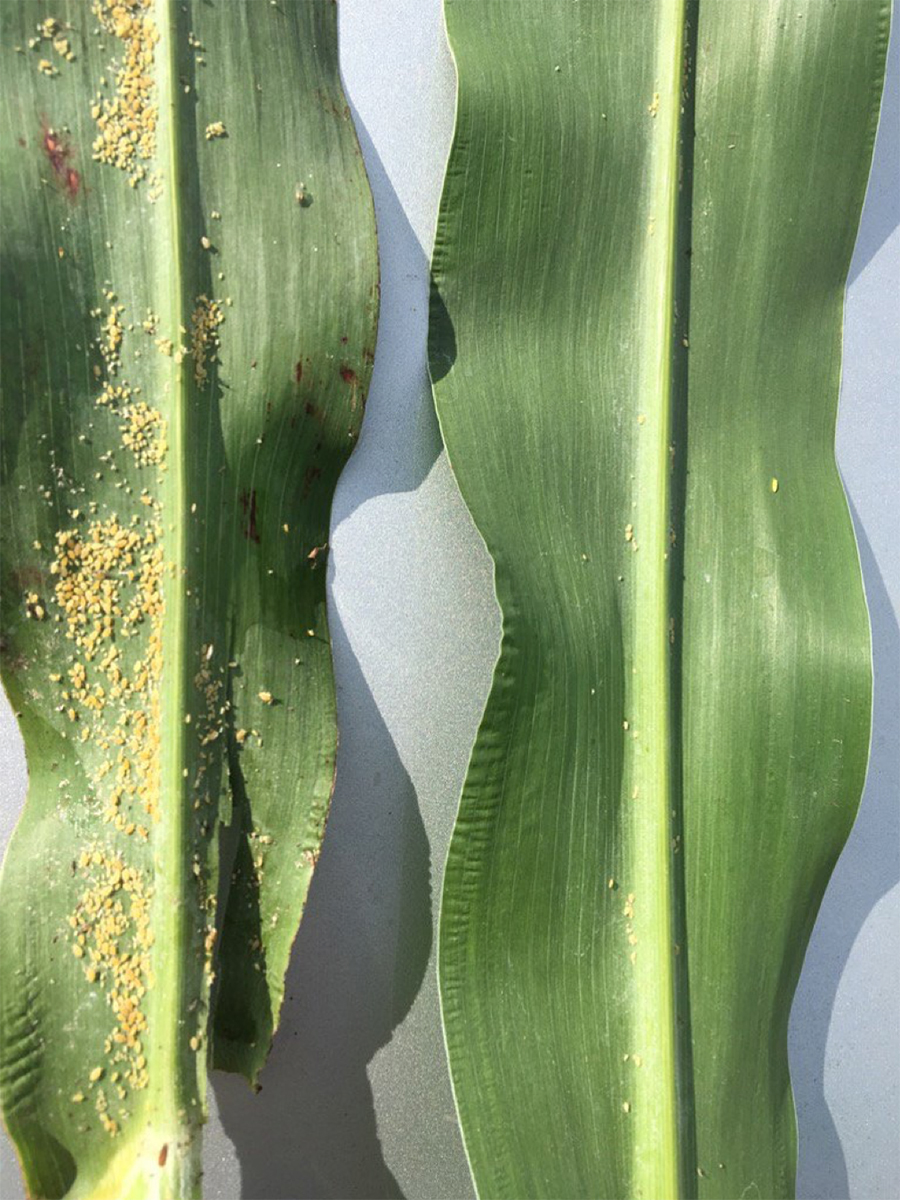 Picture 1. Difference in a susceptible and tolerant sorghum hybrid. Notice that the tolerant still has aphids, just not as high a numbers. 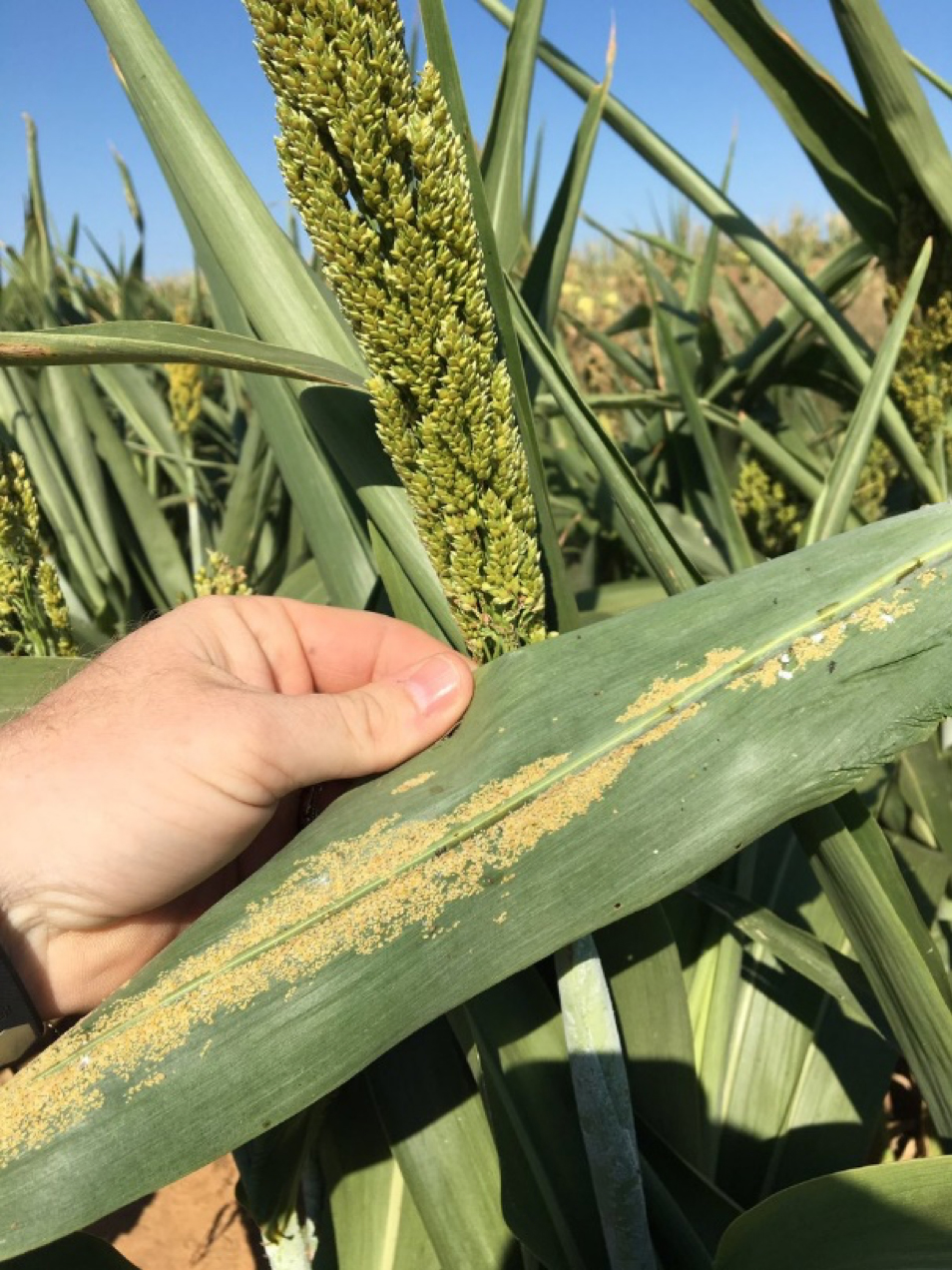 Starter fertilizer can be highly beneficial, especially in early planted grain sorghum production systems. Because grain sorghum has a very small seed with low nutritional reserves, it responds better to these applications early in the year. These applications not only have a potential to increase yield, but also help the grain sorghum plant when planted under adverse conditions. When grain sorghum is planted into cool and wet soils commonly in early to the middle of April, early season growth is drastically decreased. This can result in delayed maturity. Delayed maturity can result in earlier infestation and increased damage from sugarcane aphids. Therefore, starter fertilizers can help growers plant earlier in the season, allow them to get good earlier season growth and mature quicker during critical growth stages.

These are the main agronomic management practices growers can consider to control sugarcane aphids on sorghum. Hybrid selection, timely planting and starter fertilizers should be utilized in conjunction with insecticide application to help manage aphid pests. While there is no guarantee that the use of these practices will prevent sugarcane aphid infestation, integrating all these components are critical to a successful IPM program.