When grain is aerated, two conditions are constantly working together and adjusting to each other: temperature and moisture in the air and grain. Equilibrium is constantly being sought between air introduced into the bin and the kernels. This gives elevator managers a powerful tool. The efficient management of an aeration system allows grain to be kept in the best condition possible. But managers must know how this equilibrium science interacts with the kind of grain being stored. The term “EMC” (equilibrium moisture content) should become quite familiar when making decisions about when to run aeration fans. The temperature-moisture relationship also allows fully automated fan control systems to operate fans.

Equilibrium moisture content (EMC) is the moisture content at which grain will stabilize, given a certain temperature and relative humidity of the air surrounding kernels. This stabilization takes time to occur. However, if a certain moisture content is desired for grain being stored, it is important to know whether air being supplied will either deposit moisture in grain or remove moisture from the grain. If the desired condition of the grain cannot be met given the temperature and relative humidity, or RH, of the air, then it is not cost efficient to run the fans. Money can be saved by not running fans if the air is not helping to keep grain in the desired condition.

Why is this information so important to grain storage managers? Regardless of how much air fans supply to a bin, temperature and relative humidity of that air will dictate whether the grain will decrease or increase in moisture content. The stabilization time is impacted by the amount of air supplied. But the final grain moisture content is determined by temperature and relative humidity of the air.

Each kind of grain has its own EMC characteristics. Charts are available on the Internet for many different types of grain. Charts for the common grains grown and stored in Oklahoma follow (Figure 1a-e).

The resulting moisture content of corn aerated over a period of time with air at 55F and 65% RH will be 14.4%.

There are many ways of controlling aeration systems. The least expensive is a manual switch that is operated to turn fans on and off. If this is the method of aeration control you use, it is very important that you understand the EMC charts and use those to help make the decision to run the fans or not.

On the other end of the expense range, automatic controllers have the information from the EMC charts programmed into the controller. The manager inputs the type of grain and desired moisture content. The controller will make all of the adjustments automatically to run the fans by using the EMC relationships in the charts above. These controllers also keep records of when fans run and record the duration of fan run-time. Usually these controllers take data from temperature cables in a bin and compare it to the outside temperature. When there is a 5- to 10-degree F temperature difference, the controller will turn the fans on if the EMC data show that it is a favorable time to run the fans. The advantages to these controllers are dedicated service to around-the-clock monitoring and operation of fans, optimum conditions for fan operation and less energy wasted by not running fans when air conditions are not productive. Some economic studies say these controllers can pay for themselves in better grain conditioning and energy savings within two years.

Knowing the temperature at several points in a bin can let managers know when a trouble spot is forming. Any kind of biological activity, such as insects and mold, will cause the temperature to rise in areas around the trouble spot. Weekly monitoring of these cables will alert managers to trouble areas in time to make the decision to move the crop or remediate the problem. Some temperature cables are read individually with a handheld reader. Others are wired into the fan control system and maps of the temperature profiles are shown on a monitor. Recent telecommunication technology allows these controllers to send a message to a cell phone when a trouble spot begins to form as indicated by the temperature cable. An example of a temperature cable read-out map is shown in Figure 2. Temperature cable systems can report wirelessly to an office with router and antennae technology. Some cable systems can also indicate grain levels. The temperature of grain is usually different than the headspace temperature. This difference is apparent in the temperature cable monitor readings. The gold ovals at the top of the bin profile in Figure 2 show the headspace temperature compared to the green ovals, which show grain temperature at various depths. Temperature cables will quickly pay for themselves by alerting managers to problem areas and assisting in knowing when a temperature front has moved completely through a bin. This is an added benefit when combined with automatic fan controls. The screen shot in Figure 2 shows a significant trouble spot in the area around cables 4 and 5 in the middle of the bin. This would alert the manager that remediation through moving the grain would be advised. For more information about automation in grain facilities, see fact sheet BAE-1290, “Grain Handling Automation and Controls.” 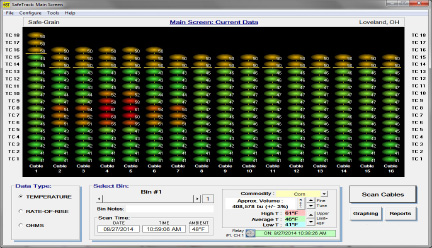 Prescription for Running Fans in Oklahoma

At harvest, begin running the aeration fans as soon as the bottom of the bin is covered with grain. Continue running the fans until the entire bulk in the bin is the same temperature. This will take about 150 hours of fan run-time if the fans are sized for 0.10 cfm/bu. If the fans are larger and provide 0.20 cfm/bu, it will take about 75 hours of fan run-time to bring the entire bulk to the same temperature. It’s very important that the temperature front moves all the way through the bin so condensation does not form someplace in the grain bulk, resulting in a layer of moldy grain or chunks of mold.

After the temperature front has moved through the entire bin, turn off fans and wait for cooler temperatures and favorable RH using the EMC chart. When the conditions are favorable, run the fans again to bring grain temperature down as low as possible.

Repeat step 2 until the grain is 40 degrees F or as low as the weather allows. Once this temperature is reached in the entire grain bulk, shut off fans and cover the intakes. Allow the grain to remain as cold as possible for as long as possible. Grain is an excellent insulator and will remain cool well into late spring and early summer.

Monitor grain monthly by checking for off odors, musty smell, heat in the headspace and hotspots in the grain. Weekly (if not daily) monitoring temperature cable information will provide early warning signs of microbial or insect activity.

If the grain is held through the next summer, run fans when the temperature is cooler outside and the RH is low enough to maintain the correct moisture content (per EMC charts). Check the top surface and headspace weekly for heating, odors and signs of insects. Taking grain samples can also indicate the general quality and moisture content.

References and other information sources