What is the Difference Between Weather and Climate?

Weather and climate are not independent. The confusion comes from weather and climate being intimately connected to each other, and this confusion is often highlighted in discussions about our changing climate. Weather and climate are not independent. The averages of daily weather are used to monitor climate. Changes in climate lead to changes in weather patterns including extremes. An easy way to remember the difference is that climate is what you expect, like a hot summer, and weather is what you get, like a cool day in August. Our communities and farms are affected by shorter weather events. Their long-term sustainability is affected by climate and climate variability attributed to natural processes and human activities. Figure 1 depicts how weather and climate are intertwined. Over time, the weather forms the climate and influences the environment (soil, hydrology, plants, and animals), and economic viability of our human systems. 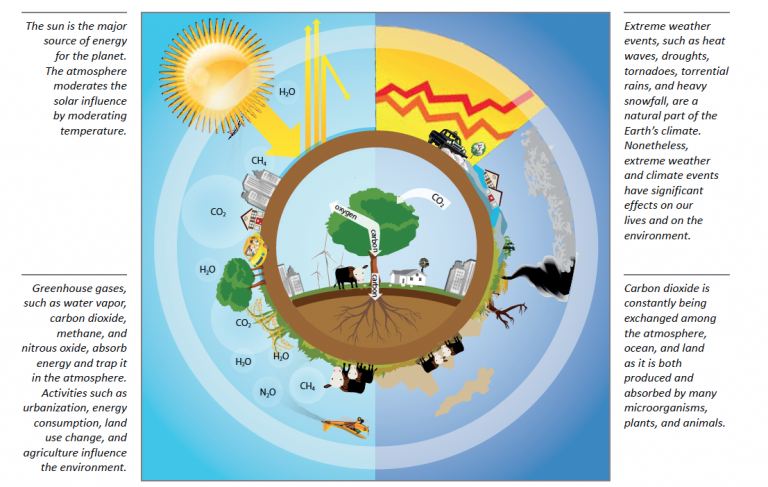 Figure 1. Communities and farms are affected by short-term weather events. Their long-term sustainability is affected by climate (long-term weather variation or expected weather) and climate variability driven by natural and human processes.

Weather is the behavior of atmosphere at any given moment. It is what we observe on a daily or weekly basis and includes, but is not limited to, sunshine, rain, cloud cover, wind, hail, snow, sleet, freezing rain, blizzards, ice storms, and thunderstorms. We generally think about weather and how it affects our lives and activities. Weather can change from minute-to-minute, hour-to-hour, day-to-day, and season-to-season.

Climate is the long-term aggregation of weather that occurs in an area and the extent to which those conditions vary over long time intervals. When scientists talk about climate, they are looking at patterns of precipitation, temperature, humidity, sunshine, wind speed, fog, frost, and other variables, such as soil temperature and moisture, that occur over a long period in a particular place. The concept of climate has broadened and evolved in recent decades in response to the increased understanding of the underlying processes that determine climate and its variability. Earth’s climate starts with the sun, the sole energy source for our planet. Climate is influenced by interactions involving the sun, ocean, atmosphere, clouds, ice, land, and living organisms (Figure 1). Often, this is thought of as the “climate system.” Climate varies by region as a result of local differences in these interactions. The Great Plains has a continental climate. This features wide variability from season to season and year to year, with little moderating effect from large water bodies.

Meteorologists and climatologists regularly use “normal” for placing recent climate conditions into a historical context. Climate “normals” are three-decade averages of climatological variables, including temperature (Figures 2 and 3) and precipitation (Figures 4 and 5). A “normal” of a particular variable (e.g., temperature) is defined as the 30-year average. The current normal period in the United States is based on 1981 through 2010 data. For example, the January minimum temperature normal for Ottawa, Kansas (19.3 degrees Fahrenheit) is computed by calculating the average minimum daily temperature in January for each year from 1981 to 2010 and then averaging those values. NOAA’s National Climatic Data Center (NCDC) released the 1981 through 2010 Normals on July 1, 2011. Because climate normals provide a historical perspective and help us understand the unusualness of current weather, they are commonly seen on local weather news segments for comparisons with the day’s weather conditions. Graphing the high, low, and mean temperature for a single year over the normal for that location can help you visualize how well conditions fit into the typical pattern (Figures 6 and 7). 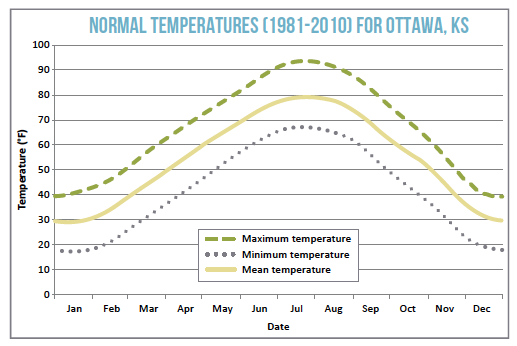 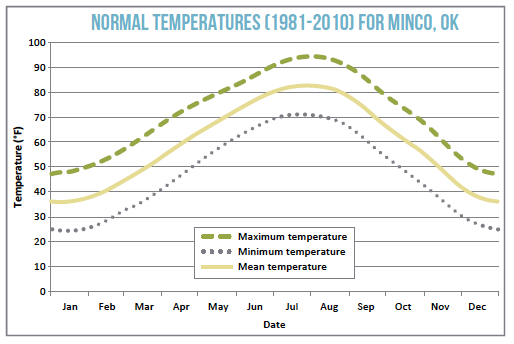 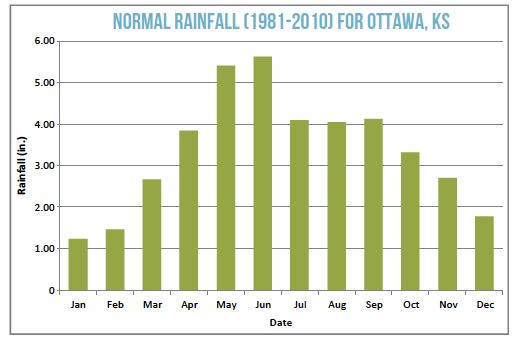 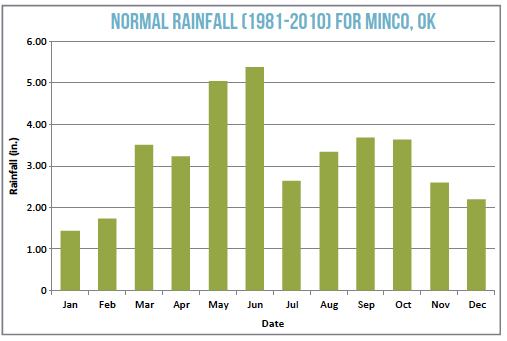 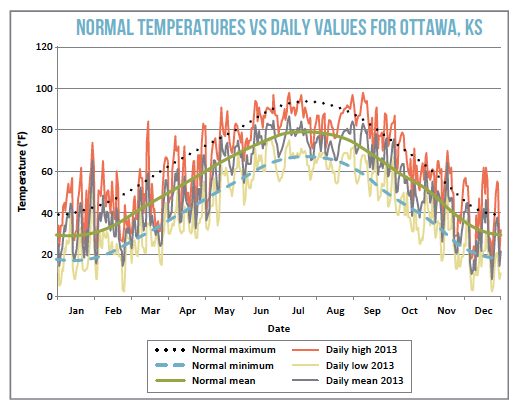 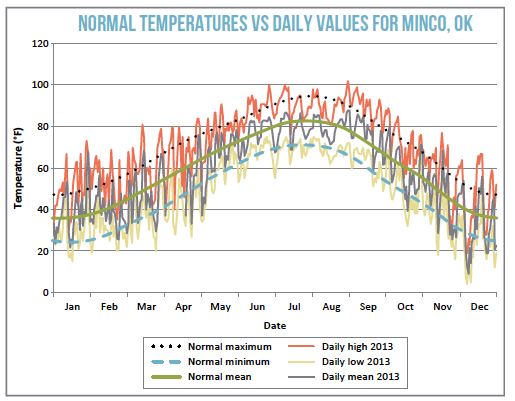 Climate – The “average weather” or more specifically the statistical aspects of the atmosphere-hydrosphere-land surface system that varies over time ranging from months to millions of years. The classical period for averaging climatic variables as defined by the World Meteorological Organization is 30 years. Climate also describes long-term statistical averages and measures of variability associated with daily weather.

Climate change – Any systematic shift in the long-term statistics of weather elements (such as temperature, rainfall, or winds) sustained over several decades or longer. This can include changes to both averages of these elements as well as measures of variability and extremes. These changes can be caused by natural forcing (see definition for forcing(s) below), such as changes in solar emission or slow changes in the Earth’s orbital elements; by natural internal processes of the climate system, such as glaciations; or by human activities (anthropogenic forcing; for further information see references).

Climate normal – The latest three-decade averages of climatological variables, including temperature and precipitation. Climate normals are updated every 10 years, when data for the last full decade have been compiled.

Climate variability – The pattern and range of climate parameters (aggregate weather) for a particular place or region over a given time period. These may include temperature, precipitation, and frequency of extreme events.

Forcing – An agent that causes a change in a system, such as a climate system. A volcanic eruption is an example of a natural forcing that can change the composition of the atmosphere.

Precipitation – All forms of water particles that fall from the atmosphere and reach the ground. These include rain, snow, sleet, and hail. It does not include fog or dew, as those are not falling; nor does it include virga, water droplets or ice that form in clouds but evaporate before reaching the ground.

Weather – The specific conditions of the atmosphere at a particular place and time, measured in terms of variables that include temperature, precipitation, cloudiness, humidity, air pressure, and wind.

This material is based upon work supported by:

U.S. Department of Agriculture, Project No. 2012-02355 through the National Institute for Food and Agriculture’s Agriculture and Food Research Initiative, Regional Approaches for Adaptation to and Mitigation of Climate Variability and Change. Great Plains Grazing is a group of research scientists, Extension specialists and consumer experts from Kansas State University, Oklahoma State University, University of Oklahoma, Tarleton State University, Samuel Roberts Noble Foundation and the USDA’s Agricultural Research Service working together to improve and promote regional beef production while mitigating its environmental footprint. National Science Foundation, Grant No. 1043393. Any opinions, findings and conclusions or recommendations expressed in this material are those of the author(s) and do not necessarily reflect the views of the National Science Foundation (NSF). Climate Change Mitigation in the Central Great Plains (CCM) is one of four sub-projects in the Kansas NSF EPSCoR initiative. This sub-project addresses one of the grand challenges of the 21st Century: evaluating and predicting the biological and ecological consequences of accelerating global climate change.

Farming or ranching can be a risky business. When production and markets come together just right, producers can breathe a little easier. While extreme, localiz...

How to properly read a weather forecast from the National Weather Service and how the forecast could affect agricultural decision making.