Using Sunn Hemp as a Cover Crop in Oklahoma

Rapid growth and ability to fix atmospheric nitrogen makes sunn hemp an attractive cover crop for producers wishing to provide additional N, increase surface residue, suppress fallow period weed growth and improve soil health. Sunn hemp is a rapidly growing legume that can produce 2.5 tons of biomass/acre and 120 lbs N/acre in as little as 60 to 90 days. In fact, sunn hemp produced an average of 4.3 tons of biomass/acre in a 2-year study near Stillwater, OK when grown for 45 to 60 days. While sunn hemp has great potential as a cover crop, there are additional management issues that producers should consider before choosing sunn hemp as a cover crop. Paramount among these considerations are potential for grazing and a viable cover crop termination strategy. This Fact Sheet will provide information on some of the expected benefits and potential challenges of using sunn hemp as a summer cover crop.

Sunn hemp is a tropical plant, and the optimum soil temperature for planting more than 50 F.  This makes it an ideal cover crop to follow wheat harvest or after short-season summer crops harvested in August or early September.  Sunn hemp is killed by temperatures less than 28 F, so it is important to plant at least 45 days prior to the first killing freeze in the fall.

Most sunn hemp cultivars are photoperiod sensitive and flower in response to days shorter than a critical day length. In Oklahoma, this typically means flowering occurs in late summer, which is too late for sunn hemp to produce seed prior to a killing freeze.  Unfortunately, this can result in a limited supply of sunn hemp seed, making it costly.  But  late flowering also prevents the possibility of sunn hemp becoming a problematic weed in the state.  Currently released (as of 2014) varieties cannot make seed in Oklahoma.  However, breeding programs in the southern U.S. are developing improved varieties of sunn hemp to increase biomass production and forage quality. These programs are also working to alter the photoperiod sensitivity of sunn hemp so viable seed can be produced, potentially decreasing seed costs in the U.S.

Sunn hemp should be drilled to a depth of 0.5 to 1.5 inches, but can be broadcast and covered with light tillage as well.  When planted with a drill, 15 pounds of live seed/acre will provide adequate stands. This seeding rate should be increased by 25 percent when seed is broadcast.  Sunn hemp is well adapted to most soil types, but prefers well drained soils. It can also grow in soils with pH values from 5 to 7.5, but does not do well in salty soils or water logged conditions.  Sunn hemp does not require nitrogen fertilizer since it is a legume; however, the seed should be inoculated with cow pea-type inoculant to ensure nodulation.  Sunn hemp growth is affected by the availability of phosphorus and potassium, so adequate applications should be made in accordance with standard soil test recommendations for legume forages to ensure optimum growth.

Sunn hemp grows rapidly and a solid stand can be very effective at preventing weed growth during the fallow period. Sunn hemp is best suited to suppress weeds that germinate after planting, and this may be particularly beneficial for difficult-to-control or herbicide-resistant weed species. Research in Kansas, for example, found that growing sunn hemp as a cover crop following wheat suppressed volunteer wheat by 81 percent to 96 percent, (Claassen, 2009). Although sunn hemp is a rapidly growing crop, early-season competition from weeds can still prevent its successful establishment. As with all cover crops, it is important to control weeds present at planting time.

As mentioned previously, sunn hemp is a legume capable of biologically fixing atmospheric N into an organic form of nitrogen. Studies have shown that sunn hemp can contain approximately 50 lbs of N/ ton of aboveground biomass; however, it is important to realize that not all of this organic nitrogen will become available to the following cash crop. Nitrogen must first be mineralized to a plant available form of nitrogen (nitrate or ammonia) through microbial decomposition of sunn hemp residues. The amount of plant-available N and the rate of its release from these residues are dependent on soil moisture, temperature and microbial activity. Therefore, it is highly variable. Another important consideration is that sunn hemp, as with all legumes, will utilize plant-available nitrogen from the soil when present during its growth. This can leave soils N deficient until sunn hemp residues decompose to release stored N. To ensure adequate supplies of N for the cash crop following sunn hemp, it is recommended that starter nitrogen be applied to the cash crop to ensure sufficient early season N supply. Nitrogen supplied by sunn hemp decomposition later in the growing season can then be credited through reduced topdress applications. 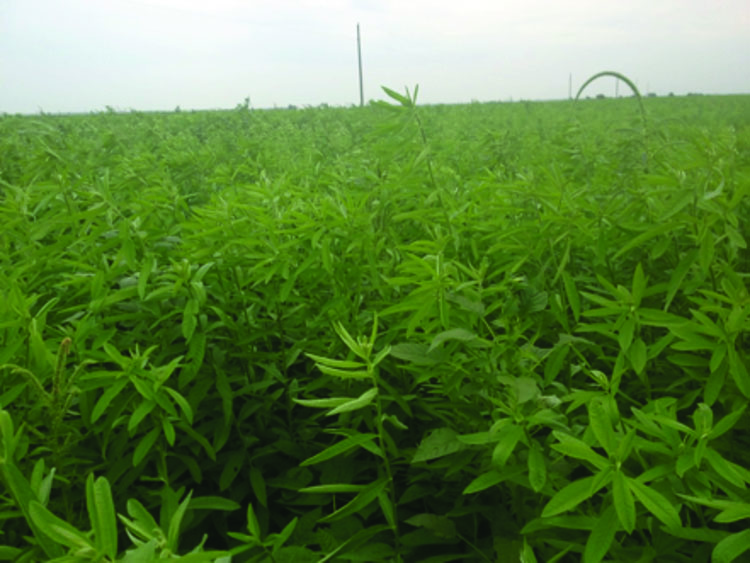 Using cover crops as a forage source provides a lot of opportunity for Oklahoma producers.  Grazing and/or haying are currently allowed within NRCS incentive programs such as the Environmental Quality Incentive Program (EQIP) and Conservation Stewardship Programs (CSP).  However, it is important to talk to your district conservationist about compliance with these incentives if you intend to graze cover crops.  It is also important to select species that have the potential to produce quality forage.

Sunn hemp is a rapidly growing plant and it is tempting to use it as a forage source.  However, no cattle grazing trial data is currently available, and only limited information is available to assess forage quality and palatability for other grazing animals such as goats or sheep.  We do know that the neutral detergent fiber (NDF) and acidic degergent fiber (ADF) levels in sunn hemp leaves are similar to that found in other forage legumes such as crimson clover.  Also, the protein content of sunn hemp leaves can be as high as 30 percent.  The NDF and ADF in the stems, however, are too high to be good quality forage.  Sunn hemp may serve as a forage source during early growth, but its forage quality will rapidly decline at 4 to 6 weeks after planting due to the increase in stem biomass. Similarly, do not plan on harvesting sunn hemp for hay after 4 weeks of growth, but it may be suitable for low-intensity grazing where animals are able to selectively graze the leaves.

If sunn hemp is planted in August or September following an early summer cash crop it is generally best to simply let freezing temperatures terminate the sunn hemp. Many farmers have reported good success with using crimping or mowing of sunn hemp as non-chemical methods of termination. Sunn hemp less than four feet tall can generally be terminated with 0.75 to 1.0 lb. a.e./acre glyphosate; however, experience has shown that termination of large (in excess of 5 feet tall) sunn hemp can be challenging. When planted in late June or early July, sunn hemp can easily reach this size if sufficient rainfall occurs. Before letting sunn hemp grow to a large size, it is important that you have the equipment to properly apply the herbicide to a crop of this stature and ensure thorough coverage of leaves with the herbicide. If an increase in soil N is one of the main goals of using sunn hemp, it may be prudent to terminate it prior to flowering because the nitrogen content of legumes begins to decline at flowering. 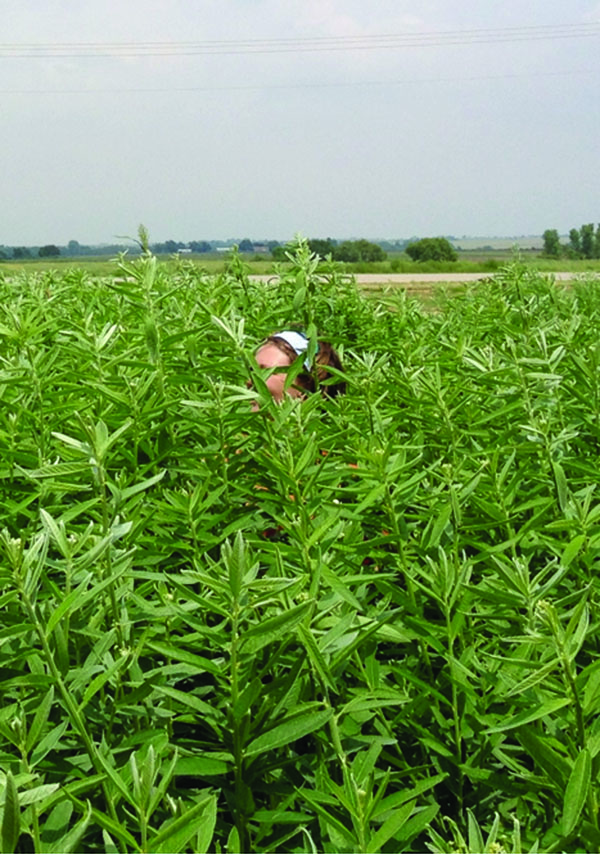 This picture was taken in August 2012 of a graduate student standing in a plot of sunn hemp planted in June. It is 5 feet tall and starting to bloom.