Types of Aeration Systems: Which Type is Right for You?

Depending on the grain bin configuration and the structure use, the aeration system must be designed to move air through grain in the most effective and efficient way possible. Knowing the options for aeration system designs will help you make wise decisions when building a new bin or retrofitting existing bins for aeration. With proper design and management practices, aeration systems can help maintain the quality of your grain.

There are nine different types of aeration systems. Two are quite common, two are a little less common and the remainder are found in “specific” applications.

Positive pressure (push) systems
It is speculated that these are the most often used aeration systems, particularly in new steel bin installations in the U.S. Positive pressure or push systems consist of fans blowing air into the bin at the bottom, either through ductwork or a perforated false floor. The air is then exhausted with power exhaust fans on the roof, with passive venting on the roof or with a combination of power exhaust fans and passive vents or space in the roof (Figure 1). Air will heat a few degrees from friction as it goes through the grain bulk, compared to negative pressure (see below) systems. But hot air rises and the positive pressure system takes advantage of that natural warm air movement. It is important to have the exhaust fans and the aeration fans wired separately so the exhaust fans come on before the aeration fans. This helps reduce chances of damaging the roof with differences in pressure. 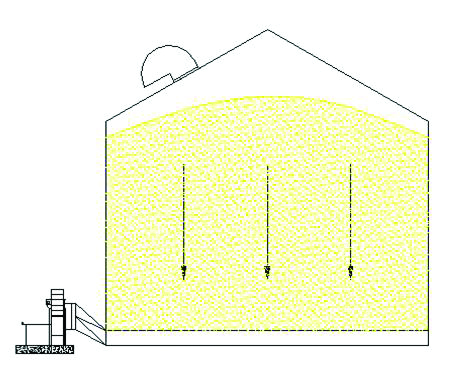 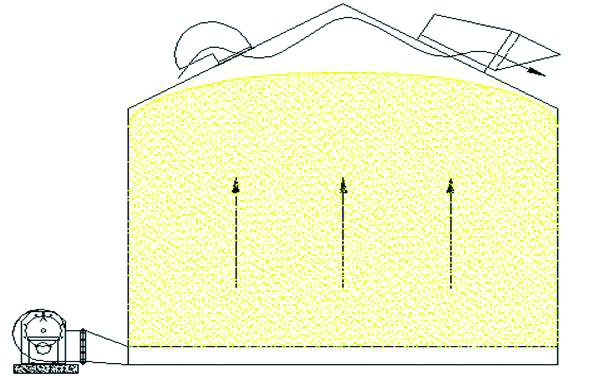 Pull-up systems
This system is commonly used on concrete tanks. The fans are located on top of the structure and they pull air up through the bin (Figure 3). This system does not require exhaust fans on the top but proper design of venting and duct work at the bottom of the bin is important because this is where the air must enter the bin. Extra reinforcement is necessary on the roof of the structure to accommodate the extra equipment weight. One advantage to this system is that it is quieter than most aeration systems, which can be a big plus in populated areas. 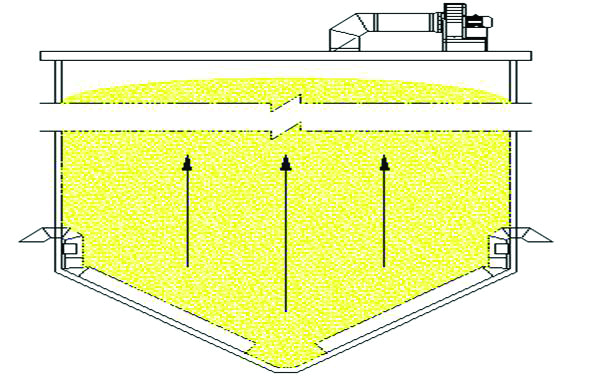 Push-Pull (high air) systems
For this system, fans are located both at the top and the bottom of the bin (Figure 4). This application is for concrete tanks that have reinforced roofs much like that designed for a pull-up system. This system can be especially helpful when storing high-moisture grain. Static pressure is cut in half when compared to a negative or positive pressure system. The amount of air provided by the fans can be much higher than in other system designs.

Turbocharged systems
Sometimes these positive pressure systems are considered “in-line” fan systems or centrifugal fans in an in-line axial fan configuration. Contact fan manufacturers about their company designs of this type of fan. Two fans are placed “in series” and can increase pressure with the same capacity when needed. The exhaust from one fan blows directly into the intake of another fan. Powered exhaust fans on the roof are needed for these systems to remove moisture. These systems are more expensive, but allow for higher moisture grain to be stored. They can be used in either concrete or steel tanks.

Manifold systems
These systems use fans pushing air through manifolds in multiple bins (Figure 5). There are fewer fans to maintain, which can save money, but the management of the system is more difficult and the air distribution is harder to control. 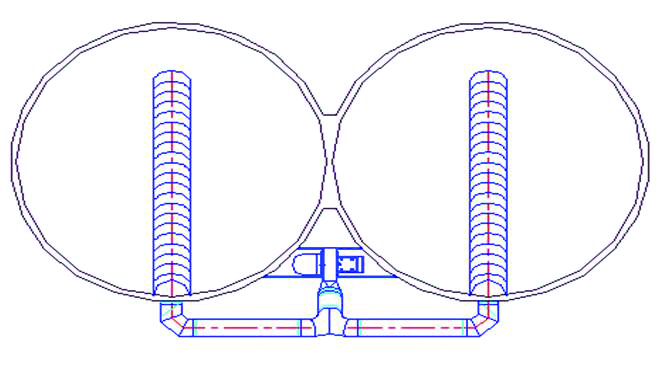 Cross flow systems
Cross flow aeration systems (Figure 6) move air from one wall of the bin through the grain bulk to the center of the bin or to the other side of the bin. Ducts run vertically on the walls of a bin and air is blown sideways. The static pressure and the horsepower of the fans are less in this design. However, the initial installation cost of these systems is higher and maintenance of the equipment is more difficult. 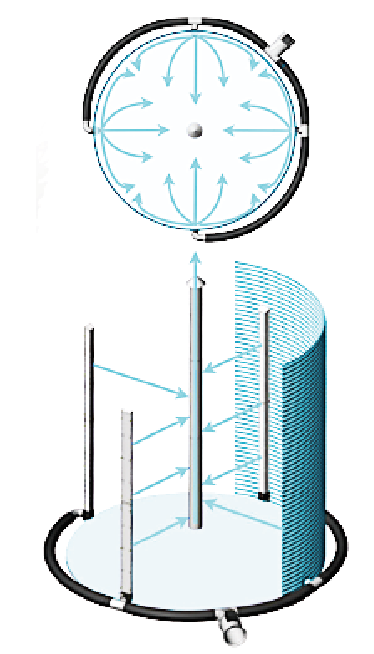 Air-assisted unloading (Kanal®) systems
These aeration systems are designed so they also aid in unloading the tank. The floor has concrete channels that route the grain into the sump (Figure 7). Air assists the grain along these channels, guiding it into the reclaim system. 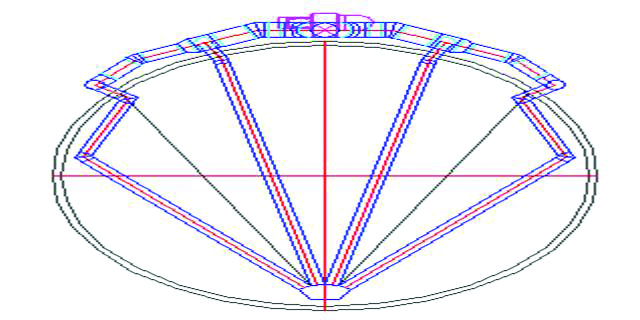 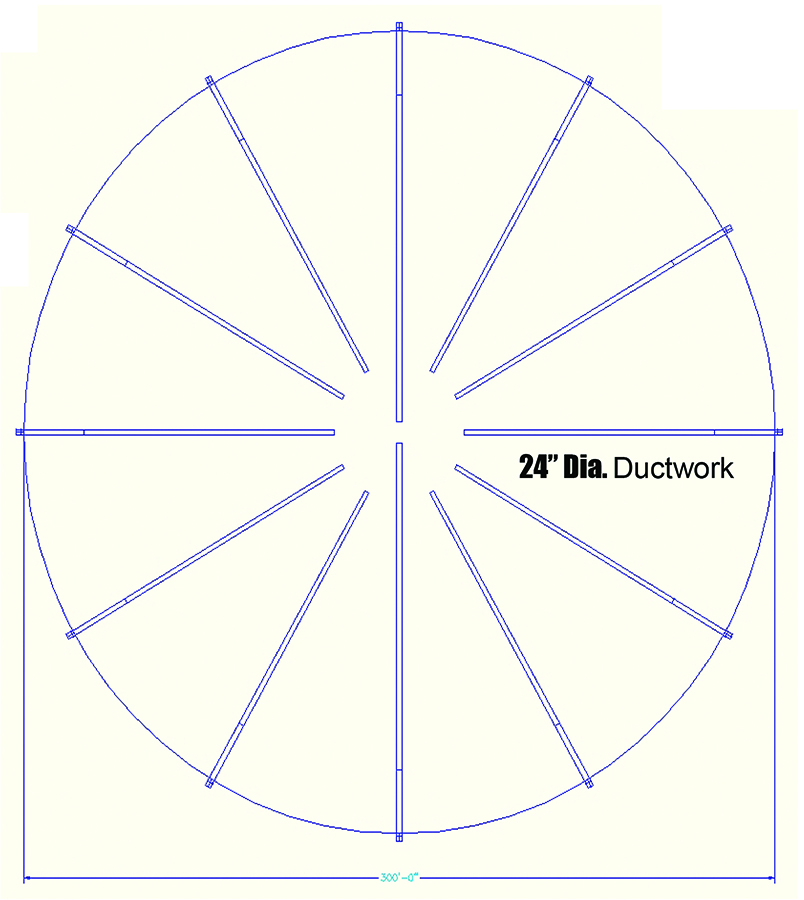 Aeration equipment design is rather complex and must be considered as a “system.” An aeration system includes the fans, the ductwork or perforated flooring, the passive and/or powered vents, the grain, the air being moved through the grain and the controls (either electronic or manually operated). Careful attention must be paid not only to the design of this system, but also to the proper timing and control of the aeration system. Contacting a reputable aeration system contractor may be the best choice for purchasing and installing new aeration systems.

References and other sources of information