The Food and Drug Administration (FDA) requires that total, saturated and trans fat (TF) and cholesterol contents of the products are listed on Nutrition Facts and Supplement Facts panels. The labeling requirements are based on scientific evidence that consumption of saturated fats and TF may raise low-density lipoprotein (LDL) levels and increases the risk of coronary heart disease. LDL is commonly known as “bad cholesterol”.

A small amount of TF is found naturally in vegetable oils and some animal derived foods. The majority of the TF in our food comes from the addition of hydrogen to vegetable oils, a process called hydrogenation, which is used to convert liquid oils into solid fats such as shortening and margarine. Hydrogenation increases the shelf life and flavor stability of foods containing these fats. TF can often be found in foods made with partially hydrogenated vegetable oils such as vegetable shortenings, some margarines (especially hard margarines), crackers, candies, cookies, snack foods, fried foods and baked goods. Fully hydrogenated oils do not contain TF.

Since 2006, food manufacturers have been required to include trans fat content information on the Nutrition Facts label on the packages. Currently, food manufacturers are allowed to make “trans free” or “no trans” claims if the amount of trans fat in the product is less than 0.5 g trans fat per serving. One serving is defined as one tablespoon or about 12 g of trans fat. Hence, trans free or no trans claims on the product packages do not necessarily mean that the product does not contain any trans fat. Check the ingredient list on the package to see if any hydrogenated oil is listed.

Although trans fat consumption decreased about 78 percent between 2003 and 2012, the current TF intake remains a public health concern. In June 2015, the U.S. Food and Drug Administration finalized its determination that foods made with partially hydrogenated oils (PHOs), the primary dietary source of artificial trans fat in processed foods, are not “generally recognized as safe” or GRAS for use in human food. Food manufacturers will have three years (until June 2018) to remove PHOs from products. This will allow companies to either reformulate products without PHOs and/or petition the FDA to permit specific uses of PHOs. Following the compliance period, no PHOs can be added to human food unless they are otherwise approved by the FDA.

Consumers can reduce the amount of TF in their diet by limiting foods made with partially hydrogenated oils. Healthy alternatives to these fats include monounsaturated oils (i.e. olive and canola) and polyunsaturated fats (i.e. soybean, corn, sunflower oils, and foods like fish and nuts).

While milk and dairy foods contain small amounts of naturally occurring TF, in most cases the amount per serving is less than the FDA’s labeling threshold of 0.5g per serving. Scientific research shows some naturally occurring TA may have health benefits. For example, there is a trans fatty acid found in dairy foods known as conjugated linoleic acid (CLA) that has been shown to have potential cancer-inhibiting properties. The FDA regulation does not require CLA to be included in the labeling of TF.

TF content of foods can be found on a separate line immediately beneath the saturated fat on the nutrition label (Figure 1). Currently there is no defined % Daily Value (DV) for TF. Dietary supplement manufacturers must also list TF on the Supplement Facts panel if they contain more than 0.5 g or more TF per serving. The examples of dietary supplements with TF would be energy and nutrition bars. More information on TF regulation can be found on the FDA web page. 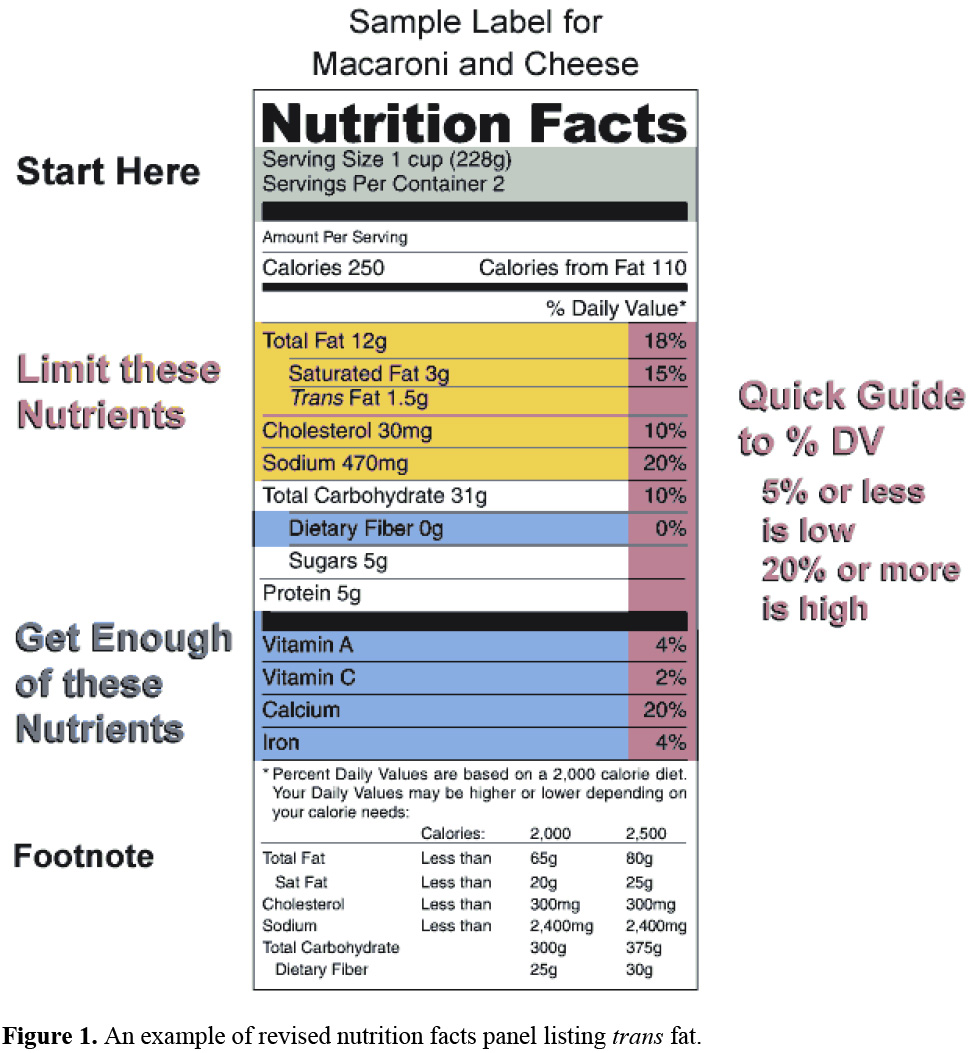 Fat is an important component in most foods. Selection of a suitable type of fat for formulation of baked goods is particularly important because fat adds moisture, flavor and retards the staling process. Spreadability or plasticity is very important for formulating a non-hydrogenated fat or margarine to be used in baking applications. No trans fat replacers are usually a blend of vegetable oils, emulsifiers, hydrocolloids and gums. Some manufacturers pursue palm oil blends to replace partially hydrogenated fats because palm oil contains more saturated and solid fat at room temperature than most other oils. Although the debate about the role of saturated fats in maintenance of health is not over, there is significant amount of scientific data indicating that both types of fats, TF and saturated fat, increase LDLs, which contribute to atherosclerosis and high cholesterol. When formulating a healthier product, lowering both the saturated fat and TF, not just one, should be the goal