The Oklahoma Red Cedar Resource and Its Potential Biomass Energy

Eastern redcedar (Juniperus virginiana L.), commonly referred to as redcedar or cedar, is the most widely distributed conifer in the eastern United States.  Redcedar is native to Oklahoma, and the species occurs naturally in all but three or four counties in the state.  Significant increases in redcedar infested acreages have occurred during the past 50 to 60 years.  It has been estimated that in 1950, redcedar and other junipers covered approximately 1.5 million acres in Oklahoma.  By 1985, those species covered approximately 3.5 million acres.  The Governor’s Task Force, in 2002, suggested that some 8 million acres of juniper existed in the state.  That same Task Force estimated that Oklahoma is losing almost 300,000 acres per year to juniper encroachment.

With the existing economic conditions and with recognition of the problems that result from redcedar encroachment, a number of individuals and organizations are exploring the possibility of utilizing redcedar for bioenergy purposes.  This fact sheet summarizes a recent study directed toward the amount of energy potentially available in Oklahoma’s eastern redcedar.

Redcedar volumes and weights were obtained from the U.S. Forest Service Forest Inventory and Analysis (FIA) program. With this protocol, trees are measured in plots established on a grid sample design.  In eastern Oklahoma, all plots were re-measured in 2007 and 2008, with 20 percent of the plots measured each year since.  Ten percent of central and western Oklahoma counties are being re-measured each year, with approximately 30 percent of the current cycle completed to date.  The full cycle for central and western Oklahoma will not be completed until 2017.  Thus, a large margin of error currently exists for estimates within that region. 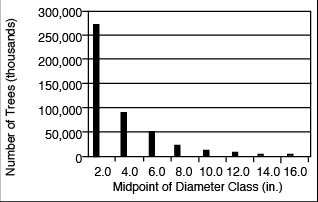 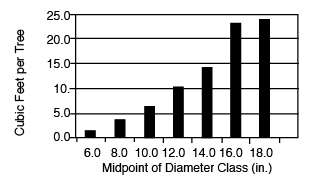 The diameter distribution of Oklahoma redcedar trees is presented in Figure 1.  The generalized shape of this curve, with a large number of small trees and progressively fewer trees as diameter increases is typical of trees naturally established and grown regardless of species.

The redcedar volume for the state is estimated to be approximately 392,500,000 cubic feet, with about two-thirds of that volume in trees 5.0 to 10.9 inches in diameter.

Total merchantable bole and aboveground dry weights (in tons) for redcedar in Oklahoma are shown in Figure 3.

A total of about 9.6 million tons of aboveground biomass can be found in Oklahoma’s eastern redcedar.  Of this total, about 7.4 million tons are classified as being in trees 5.0 inches and larger.  Bark comprises 11 percent of the total aboveground biomass.  The weight of tree foliage is not available, as that component is not considered a separate category.

For trees 5.0 inches in diameter and larger, about 80 percent of the 7.4 million dry tons of aboveground biomass is in the merchantable bole, with approximately 13 percent in tops and limbs, and 7 percent in stumps. 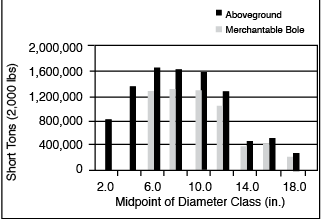 Given estimates of volumes and weights for redcedar, the next step is to derive the potential energy value (BTUs) from that material.  An energy value of 7,000 BTUs per oven-dry pound was assumed to account for the potential heat losses in the combustion process. 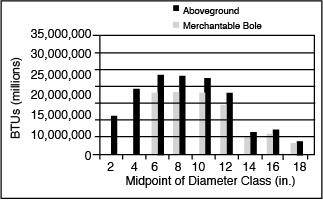 Aboveground Biomass – Total oven-dry pounds of the aboveground portion of trees 1.0 inch in diameter and larger.

British Thermal Unit (BTU) – Quantity of heat required to raise the temperature of one pound of water, 1° F.  Often used as a measure of energy contained in a fuel.

Diameter Breast Height (DBH) – Tree diameter (in inches) at 4.5 feet above the ground.

Diameter Class – Intervals into which a range of diameters of trees may be divided for use.  For example the 6-inch diameter class includes trees from 5.0 to 6.9 inches in diameter (DBH)

Kilowatt – 1,000 watts, a watt is the measure of the rate of energy use at any given moment.

Kilowatt hour (KWH) – Equal to the energy of 1 kilowatt being applied for one hour.  1,000 kilowatts equals one megawatt.

Stump Height – Value given to the height of the stump, assuming tree has been removed.  Assumed to be 1 foot above the ground.

There are approximately 392 million cubic feet in redcedar trees that are 5.0 inches in diameter and larger.  Overall, approximately 9.6 million tons of aboveground redcedar biomass exist in Oklahoma.  Of this amount, about 7.4 million tons are in trees 5.0 inches in diameter and larger.  About 134 trillion BTUs are in aboveground biomass, with some 104 trillion BTUs in the larger diameter category.

While the estimates presented are based upon the best available information, these estimates in no way imply that all the biomass is accessible, available, or economical to harvest, transport, process or utilize for bioenergy purposes.  However, this information does suggest that eastern redcedar may hold promise from the standpoint of converting what has become a native, invasive species into a viable energy source.

The uses of Eastern Redcedar as furniture and construction materials.

The hazardous characteristics of the Eastern Redcedar as a resource for fuel.

Water usage characteristics for Eastern Redcedar trees and the concern on limited water supply for humans and natural resources.