The History of the GreenSeeker™ Sensor

Nitrogen (N) is an essential plant nutrient and, next to water, is the most yield limiting factor in Oklahoma.  Since 1991, the Departments of Plant and Soil Sciences (PSS) and Biosystems Agricultural Engineering (BAE) have worked together to develop technologies to help producers better manage N fertilizer, to achieve maximum production with minimal inputs. Better N management not only helps producers get more value for their N investment, but also reduces the risk of environmental pollution. What follows is a historical description of the development of the GreenSeeker™ sensors currently being used to make mid-season N rate recommendations.

Initial sensors developed in 1989 focused on detecting and spraying weeds. In 1990, the first order bindweed detector/sprayer was evaluated. By 1992, the first discussion between BAE and PSS researchers at OSU, Team-VRT (variable rate technology) took place concerning the possibility of sensing biomass. Through previous research, it was known that the biomass of winter wheat could be used as an indicator for N need.

During 1993 and 1994, the first sensor readings were taken from ongoing N rate experiments in bermudagrass conducted at Oklahoma State University, Stillwater, OK, and the Noble Foundation, Ardmore, OK. The first passive sensors were bulky and heavy, and had to be harnessed to small tractors in order to operate in the field (Figure 1).  From these sensors, red (660 nm) and near infrared, NIR, (780 nm) spectral radiance readings were collected and the normalized difference vegetative index (NDVI) was computed ((NIR-red)/(NIR+red)).  Initial results from sensing were promising and led to further experimentation in wheat and corn. 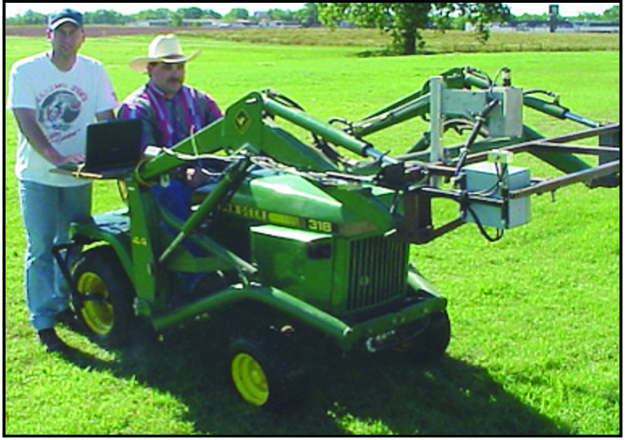 In 1994, graduate students collected sensor readings and later applied N fertilizer rates in wheat based on an algorithm developed by Team-VRT.  The algorithm is basically a set of equations used to calculate N rates based on sensor readings. Their first algorithm applied N rates using an inverse N-rate, NDVI scale.  As NDVI increased (biomass increased), N fertilizer rates were reduced. With this experiment, N rates were cut in half with no differences in grain yield, compared to fixed rates.

Throughout their early years of working together, Drs. Marvin Stone (BAE) and John Solie (BAE) repeated the question to Dr. Bill Raun (PSS): “At what resolution are there real differences in the field?” To answer this question, an experiment was conducted to determine the extent of spatial variability of soil properties, and the variability in yield from what was a visibly homogenous area.  This was performed by collecting soil and forage samples from every square foot over a 7-foot by 70-foot area (Figure 2).  The results showed that there were significant differences in soil properties from 1 ft2 to the next.  With this information a decision was made to strive for variable rate N application at a scale of 4 ft2 in wheat and by-plant in corn. 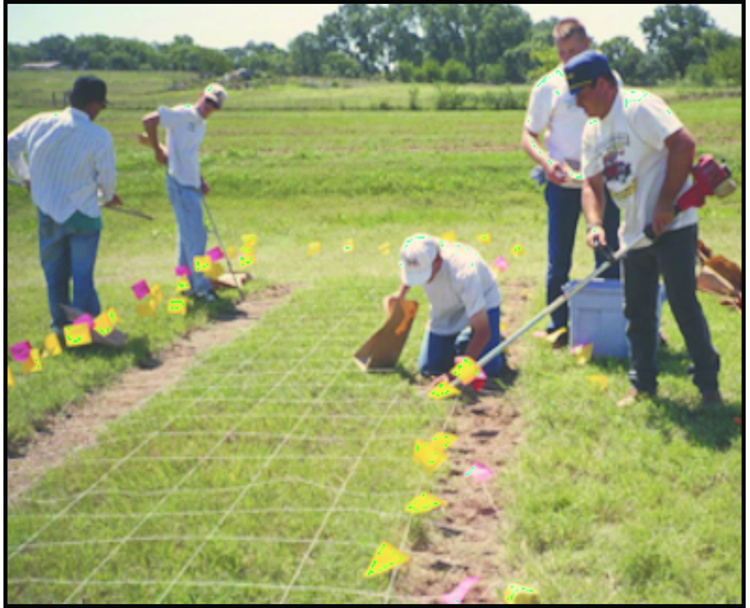 Over the years, many different configurations of passive sensors were developed and tested in the field. While significant progress was made, a major limitation of the passive sensors was the required almost constant white plate calibration, and was limited by the time of day when readings were collected.  Furthermore, the ranges of data in red and NIR bands were different from one sensor to the next, and varied dramatically with time of day, with and without cloud cover, etc.  To assist with this, Dr. Stone developed a sensor that simultaneously collected incoming light (looking up) and radiance from the crop canopy looking down. This sensor utilized passive light, meaning that it measured the reflectance of natural light (Figure 3). This sensor measured both the amount of light hitting the plant and the light being reflected off the plant. Using this technology, soil fertility graduate students conducted extensive field experiments looking at changes in sensor readings with multiple growth stages, varieties, row spacing, and N rates. Estimates of biomass were found to be accurate regardless of changing variety and row spacing. 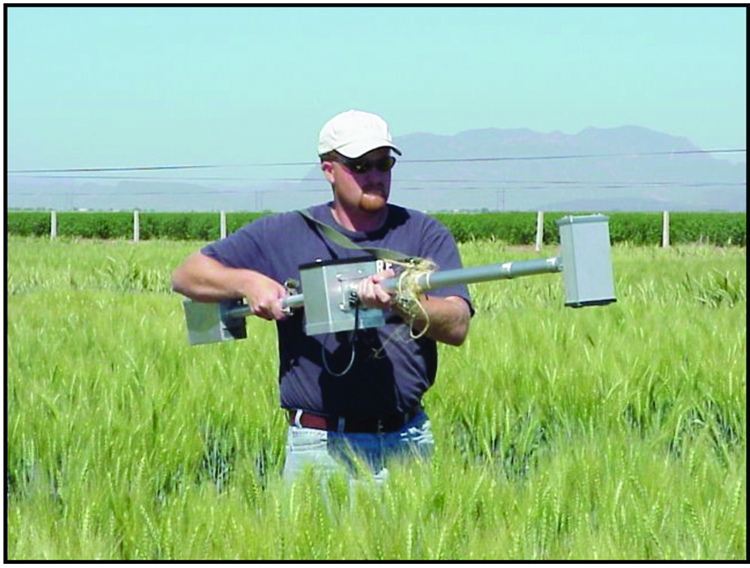 In an endeavor to develop and expand the adoption of this technology, in the same year, Team-VRT established a collaborative project with CIMMYT, an international agricultural research center based in Mexico.  This project focused on variety selection and the prediction of spring wheat yield potential mid-season. Sensing technology for nutrient management continued to advance in 1996 with the development of a relationship between total forage N uptake and use of NDVI obtained from optical sensors. In March 1996, the very first variable rate N applicator was demonstrated to the public at a public field day in Hennessey, OK, where more than 100 people attended (Figure 4). 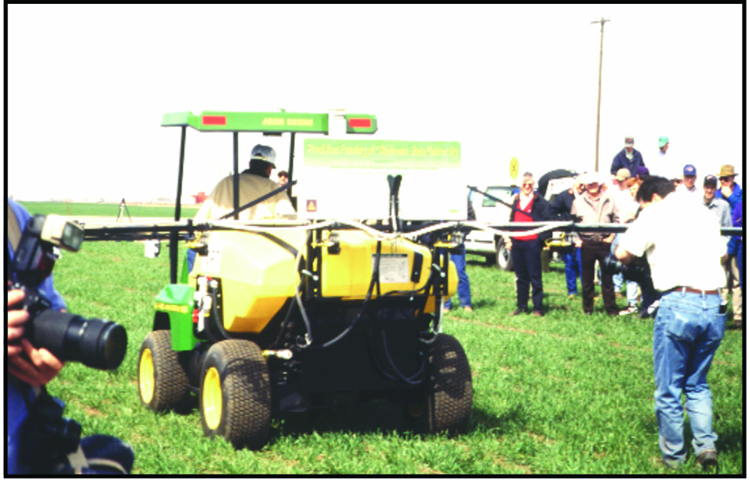 With the benefits of the sensor-based technologies established, there was a need to devise a method to disseminate the findings, therefore in 1996 TEAM-VRT put together two web sites, these two sites have been molded into the current www.nue.okstate.edu. website. The web has become an essential tool in the education and use of sensor-based technologies. Since the initiation of the websites, more than 150,000 people have visited these sites

In 1996, the N rate prescription was based on the sensor’s midseason yield prediction. It became clear to the team that sensor readings obtained from different sites could be combined into a single equation and used to predict yield. That was when the first highly functional yield prediction model for wheat was developed, capable of working over multiple sites and years.  A later modification of the original index used to predict yield potential would include growing degree days and become INSEY (in-season estimated yield) (Figure 5).

By 1998, Team-VRT agreed to work with John and Ted Mayfield (future founders of N-Tech Industries and manufacturers of the GreenSeeker™ sensor) concerning the potential commercialization of a sensor-based N fertilizer applicator for cereal crops.  It was essential to work with the Mayfields, as they owned much of the relevant intellectual property surrounding active optical sensors, and that they had purchased from John Deere Co. The use of active sensors would be necessary in the development of Sensor Based N Recommendations (SBNRC), as active sensors measure the reflectance of light that they emit, meaning that the new sensors were not affected by the environment, cloud cover, and time of day like previous passive sensors, and could be operated 24 hours a day. More research on sensors continued. A significant milestone was noted at Covington, OK where yields were actually increased at lower N rates.

When evaluating long-term winter wheat grain yields in 2000, Dr. Gordon Johnson (PSS) noticed that the fertilizer rate needed to maximize yields varied widely over the years and was unpredictable in several long-term experiments. If N responsiveness was so variable over years, Dr. Bill Raun postulated that this could be predicted from mid-season sensor readings collected from non-N limiting and N limiting plots.  This led to the development of the Response Index (RI). The RI enabled the prediction of potential response to applied N using sensor measurements collected in-season, thereby allowing the prediction of the magnitude of response to top-dress fertilizer, allowing for adjustments in top-dress N rate based on  projected responsiveness. Using the in-season response index (RINDVI), it was possible to project responsiveness to applied N, across location, climatic conditions, and year.

The year 2000 marked the establishment of N Fertilizer Optimization Algorithm (NFOA) which incorporated yield prediction and the response index to determine mid-season N rate.  During the same year, BAE constructed an applicator capable of treating every 4 ft2running at normal operating speeds (Figure 6). 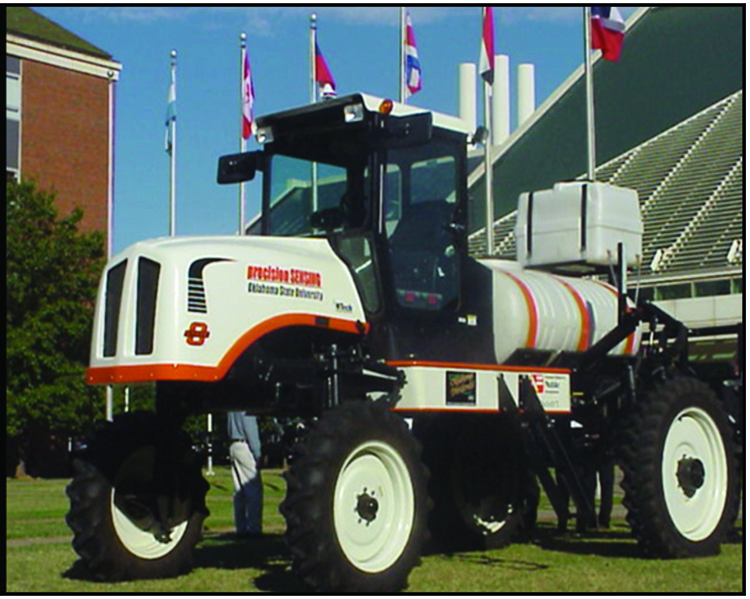 Figure 6. The Cherokee VRT applicator, this sprayer has a 60 ft boom with sensors mounted every 2 ft along the boom.

In 2002, the first online Sensor Based Nitrogen Rate Calculator (SBNRC) was released on the www.nue.okstate.edu website.  This online calculator allows users to input the few necessary values (Growing Degree Days, N-Rich NDVI, and Farmer Practice NDVI) and receive an N rate prescription for that specific environment.  In addition, 2002 also marked the commercial release of GreenSeeker™ by N-Tech Industries (Ukiah, California).

From 2003 to date, sensor technology and our understanding of its abilities has expanded. This has led to several revisions of the sensor technology since the introduction of the first GreenSeeker™ in 2002. At publishing time of this Fact Sheet, the NUE website hosts 24 SBNRC algorithms for multiple crops, states, and nations.  Each algorithm was developed by researchers or users from their respective region.  In addition to the online SBNRC, scientists and graduate students from OSU have played a role in delivering this technology to twelve countries around the world, the majority of which are third-world countries, where such technologies have the potential to have a great impact.

The Next Generation of Optical Sensors

The development of sensor-based technologies was timely, coming at a time when producers faced issues with the rising cost of production and the focus on environmental pollution due to overapplication of N fertilizers. Current efforts include the development of a low cost “pocket” sensor (Figure 7).  This new sensor is relatively inexpensive and will increase the adoption of this technology worldwide, especially in developing countries where N fertilizers are underapplied due to limited resources. 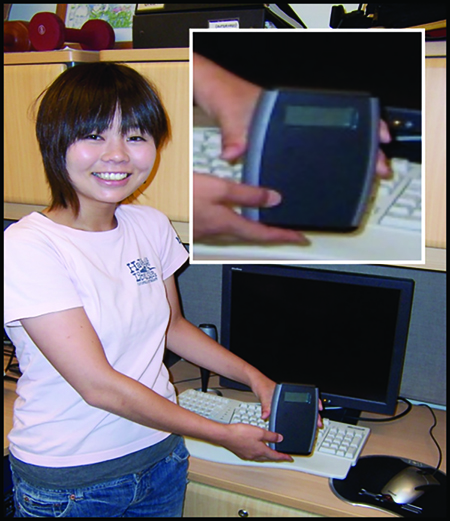 Figure 7. Prototype of the pocket sensor.

As the world’s population continues to increase, land resources remain static. Technologies that maximize production, preserve the environment, and feed the world need to be implemented. The GreenSeeker™ technology provides an opportunity for the producer to apply only the needed N fertilizer on their farms, thereby maximizing their production and reducing their cost of production. This technology has been employed around the world in precision agriculture where the application of fertilizer, pesticides, plant growth regulators, and defoliants are based on the crop status and field conditions. Team-VRT at OSU continues to refine this technology to ensure that it serves farmers from both the developing and developed world.

This work would not have been possible without the contribution of the original OSU sensor team consisting of Dr. Gordon Johnson (PSS), Dr. Bill Raun (PSS), Dr. John Solie (BAE), Dr. Marvin Stone (BAE), and Dr. Dick Whitney (BAE).  The accomplishments of the team were dependent upon their ability to interact positively, while always questioning each other.  These people will be the first to recognize that the team would not have been successful without the support of a good administration and the work force of dozens of graduate students from both BAE and PSS who have made countless contributions to this technology.