The Carbon Footprint of U.S. Beef Compared to Global Beef

Comparing the U.S. beef industry’s carbon footprint to other nations is challenging for two main reasons:

To overcome these challenges, one can examine the results from individual studies using the same methodology to estimate CO2 equivalent emissions across the wide range of beef production systems found in the world.

In two recent analyses of global livestock systems1,2, North American beef production systems (including the U.S.) were found to have some of the lowest carbon footprints. As seen in Figure 1, when CO2-equivalent emissions are expressed per kg of protein, the U.S. and other developed nations have lower carbon footprints (10 to 50 times lower), compared to many nations in sub-Saharan Africa and the Indian subcontinent2. 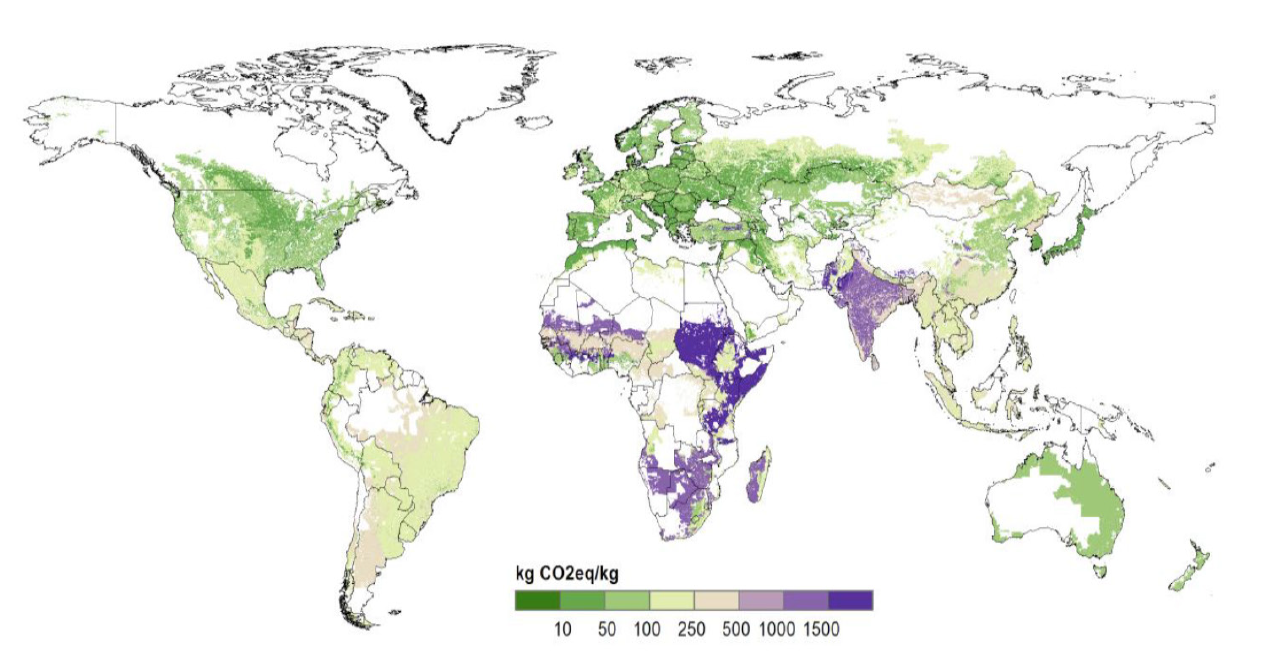 The lower CO2 equivalent emissions per kg of protein for beef production systems in the developed world are driven by higher quality (more digestible) feeds, lower impacts of climate stress (heat) on animals, improved animal genetics, advancements in reproductive performance and the reduced time required for an animal to reach its slaughter weight compared to regions with higher carbon footprints1,2. Combined, all of the above-mentioned factors drive improvements in the efficiency of beef production, while decreasing the use of natural resources and production of environmental emissions per unit of beef produced. Furthermore, it is these factors that are responsible for reducing the U.S. carbon footprint of beef by an estimated 9 to 16 percent from the 1970’s to the present day3,4. Using management techniques and technologies developed through scientific research is key to achieving improvements in beef production efficiency and further reducing beef’s carbon footprint.

The U.S. beef industry has one of the lowest carbon footprints in the world due to cattle genetics, the quality of cattle feeds, animal management techniques and the use of technology.

An overview of the environmental impact that beef production and consumption has on greenhouse gas emissions.

A look at the environmental effects of grain-finished and grass-finished beef production.

The economic impact of the amount of additional economic activity generated from conservation funding.