The Impact of Consuming Beef on Greenhouse Gas Emissions

One must first consider the amount of beef consumed by Americans. The current U.S. Dietary Guidelines for Americans recommends 5.5 ounces of lean protein per day for a person consuming a 2,000-calorie diet.1 Beef is one of the most common sources of lean protein in the U.S., with 1.8 ounces of beef per day available to U.S. consumers in 2013, according to the USDA’s Economic Research Service (ERS) Loss-Adjusted Food Availability Data Series.2  The ERS Loss-Adjusted Food Availability Data Series is derived from ERS’s food availability data by adjusting for food spoilage, plate waste and other losses to closely approximate actual intake.  Per capita beef availability (loss adjusted) has actually been declining in the U.S. through the past 35 years (Figure 1), due in part to beef production not keeping pace with U.S. population growth. Along with being a significant source of lean protein, beef provides key nutrients such as iron, zinc and B vitamins. Removing beef from the food chain would result in consumers having to seek alternative protein and micronutrient sources. 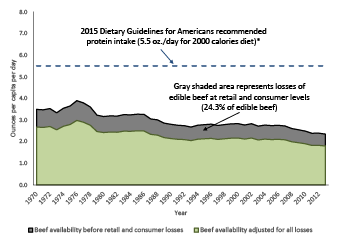 According to the U.S. Environmental Protection Agency (EPA), beef cattle production was responsible for 1.9 percent of total U.S. GHG emissions in 2013.3 By comparison, GHG emissions from transportation and electricity accounted for 25.8 percent and 30.6 percent of total U.S. GHG emissions in the same year (Table 1).3 Comparing food production (essential for human life) to transportation and electricity (non-essential for human survival, but important to modern lifestyles) is problematic. However, the comparison is instructive because though electricity and transportation produce much of the GHG emissions in the U.S., most people do not call for the elimination of electricity or transportation. Rather, efforts are made to lower the GHG emissions produced to provide the same energy and transportation services (e.g. switching to renewable energy sources for electricity generation). Using this frame of reference, another way to consider GHG emissions from beef production would be, “How can the same amount of human nutritional value be produced by the beef system while producing fewer GHG emissions?” Studying the different ways inputs (feed, water and land) can be used more efficiently throughout the beef value chain to reduce GHG emissions per pound of beef would provide the means to maintain the same level of food production, while reducing GHG emissions. Through time, beef production has made impressive advances to meet the protein demands of a growing population while reducing the amount of natural resources required to produce a pound of beef.4,5,6 For example, due to improved genetics (of cattle and the plants they consume), animal nutrition, management and the use of growth-promoting technologies, the U.S. beef industry has decreased its GHG emissions per pound of beef 9 to 16 percent from the 1970’s to today.5,7 Further improvements in the efficiency of beef production are being continuously evaluated and researched at universities and research institutions, both in the U.S. and abroad.

Another key component of reducing GHG emissions from the whole beef system is the role of the consumer.  More than 20 percent of edible beef is wasted at grocery stores, restaurants and in the home (Figure 1).8 As with other foods, the amount of non-renewable resources used and the environmental impacts used in producing the portions of beef ending up in a landfill often are overlooked.  Consumers could improve beef sustainability by 10 percent if beef waste were reduced by half.8

Beef production makes many positive contributions to the sustainability of our food system that often are overlooked by analyses of GHG emissions’ impact of removing beef from the diet. Cattle have the ability to utilize forages (e.g., grass) and byproducts (e.g., distillers grains) unfit for human consumption. Specifically, cattle can utilize cellulose, one of the world’s most abundant organic (carbon containing) molecules indigestible by humans.6  Consequently, U.S. beef producers feed their cattle from sources not in direct competition with humans and/or would have gone to waste (byproducts).6 Cattle also can convert low-quality feeds into high-quality protein from land not suited for cultivation, thereby reducing soil erosion and enhancing soil carbon storage.6 Furthermore, integrated crop and beef systems (e.g., using cattle to graze crop residues and cover crops) can lead to many positive environmental sustainability outcomes including increased soil water-holding capacity and enhanced nutrient cycling.9

Beef is a valuable asset to the human diet; it is an affordable, nutrient-dense source of lean protein.  As with the production of all foods, the production of beef results in GHG emissions; however, direct emissions from the U.S. beef industry are only estimated to be 1.9 percent of the total U.S. GHG emissions.3 Thus, even without consideration of the unintended consequences and impacts of alternative protein sources, completely removing beef from the U.S. diet would likely have a minimal impact on GHG emissions. However, as historical progress has demonstrated (GHG emissions per pound of beef have been reduced 9 to 16 percent since the 1970s5,6), there are opportunities to reduce beef’s impact, chief among them being reducing consumer waste.

A look at the environmental effects of grain-finished and grass-finished beef production.

The economic impact of the amount of additional economic activity generated from conservation funding.

Learn about the carbon footprint that the U.S.’s beef cattle production industry has on the environment compared to the rest of the world.