Conservation tillage practices are used throughout the southern Great Plains to reduce soil erosion and conserve soil moisture. Conservation tillage maintains residue at the surface. Increased surface residue provides insulation, reduces average soil temperatures, and prevents evaporative losses of soil moisture when compared to bare soils. The reduction in soil temperature can cause problems with some spring planted crops such as corn. For example, spring time soil temperatures and wet soil moisture conditions can delay or hinder crop germination in no-till systems that have a large amount of surface residue. Soil temperature has significant effects on plant growth and metabolic functions. Strip-tillage is one potential solution to address cool soil temperatures during spring planting. Strip-tillage is the removal of mulch/residue in the seed row to encourage more rapid spring warming of bare soil. Strip-till machines usually consist of a coulter followed by a knife/ shank that penetrates 4 to 8 inches below the soil surface. Discs are set behind the knife/shank to close the gap left by the knife and build a small berm. Some strip-till machines have roller baskets on the back to help level the tilled zone

Strip-till provides the benefits of both no-till and conventional till systems. Maintaining inter-row residue will maintain no-tillage advantages, such as reduced evaporation of soil moisture, while increasing soil temperature in the seed row. Figure 1 illustrates the difference that is often observed in early spring between soil temperatures in strip-till and no-till systems. In 2003, research at Manhattan, KS showed strip-till was 4.9°F warmer on average than no-till. Soil temperature is especially important when planting early in the spring when air temperatures often get very cool at night. In Oklahoma, producers planting corn early in heavy residue conditions may see improved early season vigor and yield to strip-till.

Another potential benefit of strip-till is increased options for N management. With strip-till, relatively large amounts of N fertilizer can be placed below the soil (6 to 8 inches) surface prior to planting without fear of salt injury. With fertilizer attachments on a no-till planter, the close proximity of the N fertilizer to the seed limits the rate that can be applied. Typically, N application rates at planting do not exceed 50 lbs N per acre. Other nutrients such as phosphors and potassium can be placed deep as well, but deep placement of these nutrients will not guarantee a grain yield response compared to shallow placement of nutrients. 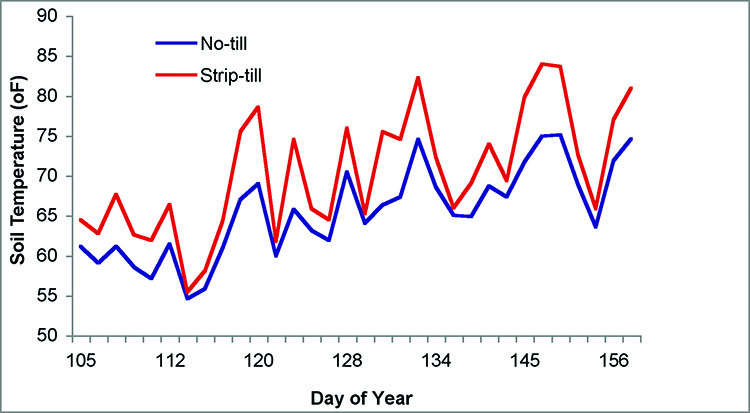 Figure 1. Soil temperature at 2 inches (seeding depth) in the row in strip-till and no-till treatments.

Some of the difference in grain yield for 2006 can be attributed to a delay in maturation of the grain sorghum due to drought stress. The conventional tillage and strip-till plots exhibited drought stress for approximately 2 weeks during the growing season in 2006. This drought stress resulted in delayed head emergence and grain fill, which resulted in reduced test weight (Table 1).

In dry years, such as 2006, strip-till may not be advantageous when compared to no-till due to soil moisture loss in the tilled strip. However, strip-till may still have benefits depending on the cropping system. Again, strip-till provides for deep placement of N fertilizers including anhydrous which may make strip-till more economical than no-till.  Strip-till can also allow for increased soil temperatures for early planted crops, while maintaining residue in the inter-row space to provide moisture conservation.

Timing of strip-tillage does not have a large impact on strip-till success. However, a few considerations should be made, such as soil moisture conditions and time of year. If soil moisture conditions are dry, you may want to forgo strip-till since tillage in the row will only make the seed bed drier. Also, if soils are wet, you may want to delay strip-till because of seed bed roughness. Remember, you are creating the seedbed you will plant into later. In parts of western Oklahoma, strip-till in the fall may be beneficial to allow the recharge of soil moisture in the seeding zone compared to strip-till a few days prior to planting. Some individuals may find strip-till and planting in one operation to fit the best. The benefit of this is that all field work can be done in one operation.

As outlined previously, one of the primary purposes of strip tillage is to create a tilled strip in which seed will be planted.  Thus there is a desire to stay on this tilled strip when planting. Success of this system depends on the ability to plant directly on top of the tilled strip where the fertilizer was placed.  There are two interrelated items to consider: matching rows on the strip till implement; and planter and driving accuracy. If the implement widths match, any errors in the guess row will have less effect on planting in the strip. If they do not match, driving accuracy must be sufficient to avoid missing the strip with the planter. Conversely, if driving accuracy has minimal error, matching rows is not as important. Driving accuracy includes being able to return to the same path and minimizing overlap or skip. Returning to the strip is relatively simple when the strip is still visible.  However, if enough time passes between when strips are made and planting, the tilled strips may not be as visible.

Though strip tillage can be successful without GPS based guidance, this is one instance where this technology can be beneficial. GPS guidance systems allow the operator to minimize driving error and return to the previous paths created by strip tillage. The increased popularity of GPS guidance has allowed farmers to apply fertilizer and till strips in the fall and return to those same strips in the spring to plant even when the strips are not visible. Farmers are typically using real-time kinematic (RTK) auto guidance systems for strip tillage applications (Figure 3). These systems are the most expensive and offer pass-to-pass accuracies of about 1 inch. The least expensive guidance systems with single frequency and WAAS differential corrections have pass-to-pass accuracies of 8 to 10 inches and will likely not provide sufficient accuracy and precision for strip tillage applications.  However, dual frequency GPS receivers with pass-to-pass accuracies of about 4 inches may provide sufficient accuracy for strip tillage.  The operator may need to use the ‘shift track’ feature periodically to make sure the planter stays near the center of the strip. Researchers at Purdue University evaluated GPS auto guidance on a simulated 1,800 acre corn-soybean farm in the Corn Belt. Their analysis and assumptions found dual frequency GPS auto guidance was more profitable than light bar guidance and RTK auto guidance when expanding acreage beyond 1,800 acres or controlling traffic on the 1,800 acre farm.

The underlying assumption to driving accuracy in strip tillage is that yield will decrease as you plant further from center of the strip.  Research in Oklahoma has found some potential benefits of precision planting. Figure 4 shows a graph of irrigated corn yield versus driving error for strip tillage plots at the OPREC in Goodwell.  This data shows that there is no significant yield decrease until you plant 4.5 inches from the center of the strip.  Since the strips were about 8 to 9 inches wide, there was no penalty until you planted outside the strip. This data shows yield loss of 6 bu/ac for every inch of driving error away from the edge of the strip.

When the planter moves off the strip, it is in a no-till environment and if it is not adjusted correctly for no-till, stands may not be as good. The data from Goodwell supports this observation. Final stands for the plots with driving errors greater than 4.5 inches were lower than those with errors less than 4.5 inches. Though this one year of data from the panhandle certainly supports a need for at least 4.5 inch driving accuracy, research in Stillwater found no yield benefit to improved driving accuracy. 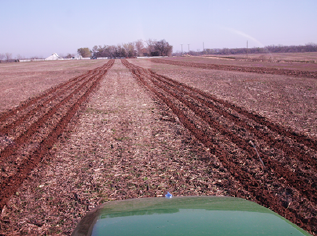 Figure 3. Strip tillage with RTK guidance in NE Oklahoma. Three 4-row strips were applied for planting with a 12-row planter. 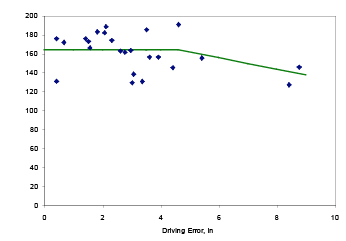 Figure 4. Grain yield versus driving error for irrigated corn at the Oklahoma Panhandle Research and Extension Center for the 2007 production year. 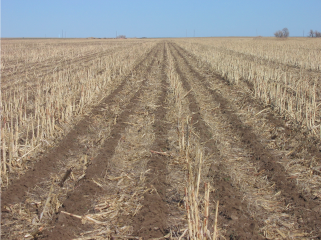 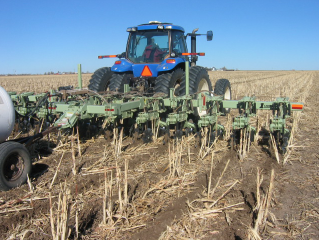 Strip-till in Oklahoma can fit into many cropping systems throughout the state. The benefits of strip-till include increasing the soil temperature in the seedbed, maintaining residue cover between the rows to conserve soil moisture, and providing options for fertility management. Soil moisture conditions at the time of strip-tillage and planting will likely determine if a producer will see a benefit from strip-tilling in a no-till system. Strip-till is an excellent way of converting cropping systems from conventional till to no-till systems because strip-till provides benefits of both systems.