The purpose of this fact sheet is to provide an introduction to the basic terminologies and use of steam in food processing. The term “steam” applies to the vapor-phase of water when reached by boiling. The term vapor describes the gaseous state of many substances. Steam, or water vapor, is invisible. Only through partial condensation does it appear as a mist (Heald, 1988).

Steam is a convenient means to convey energy in food processing operations. It is produced from inexpensive and abundant water. Pressure control valves can be used to precisely regulate and maintain the temperature of steam. Large amounts of energy are contained in a relatively small mass of steam, so heat-transfer equipment can be compact. Steam is easily and inexpensively conveyed over fairly long distances and into remote locations of the process.

Steam used by food processors commonly falls into two broad categories. The first is the so-called “culinary,” “sanitary” or “clean” steam. This type of steam is used for direct injection into the product or to clean or sterilize product contact surfaces. We will refer to steam in this category as “culinary” steam. Any additives in culinary steam must meet all applicable FDA and USDA requirements for human consumption.

The second category of steam used by food processors is often referred to as “plant steam,” “utility steam” or just simply “steam.” This document will call steam in this category “plant” steam. Ordinary plant steam can be used in most applications that do not involve contact with food products or with surfaces that contact food products. An example of a non-contact use of plant steam is indirect heating. Most people are familiar with radiant heaters (a type of indirect steam heater) used in residential and commercial applications.*

Chemical energy contained in coal, gas oil or other boiler fuel is converted into heat energy when burned. This heat energy is transmitted through the wall of the boiler furnace to the water. The temperature of the water increases due to this added energy until it boils. The heat energy added that increases the water’s temperature is known as sensible heat.

Heat is continually being added to the water, so after reaching the boiling point, the water begins to evaporate. Heat added after the boiling point is reached is known as the latent heat of vaporization. At this point, the temperature of the water (and steam) remains constant. Since the boiler is a closed vessel, the steam becomes compressed as more steam is generated and the pressure in the boiler rises. As the pressure increases, so does the boiling point of water and the temperature. As steam pressure increases, the total heat increases slightly. The sensible heat of the steam increases with increasing pressure while the latent heat decreases slightly. 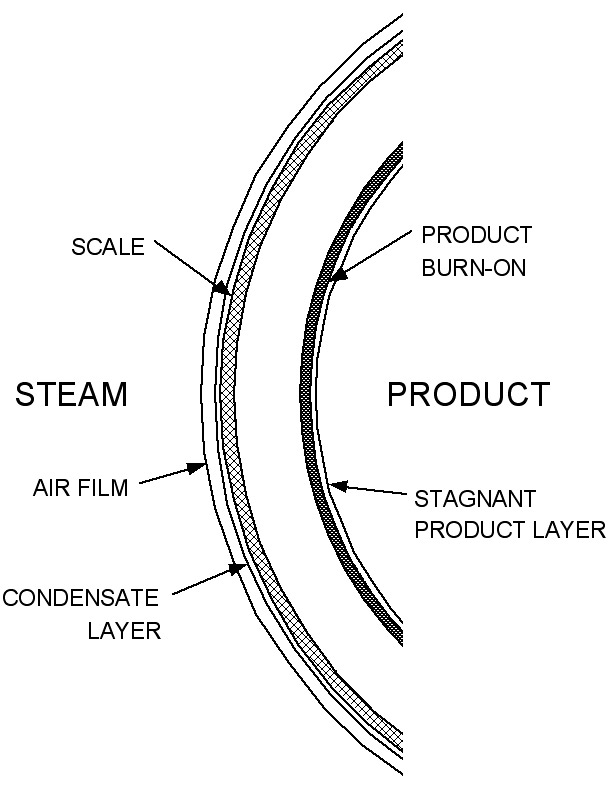 Stagnant layers of product can be removed (or reduced) by agitation, especially surface-scraping agitation. Product burn-on can be minimized by surface-scraping agitation and regulation of the heat-transfer surface temperature. Rust, scale and organic films may be controlled by methods such as frequent cleaning of heat-transfer surfaces, specification of corrosion-resistant materials, and selection and maintenance of boiler-water additives.

Examples of Food Processing Equipment that use Steam

Examples of typical steam-using equipment in food processing plants are given in this section.

Shell and tube heaters are commonly used to heat a flowing liquid by condensing plant steam or a pumped heat transfer media. A thin-tube wall separates the heating media from the product being heated. In the case of a pumped heat-transfer media (such as hot water), steam is often used to heat the media in a separate heat exchanger. Figure 2 shows a typical shell and tube heater. 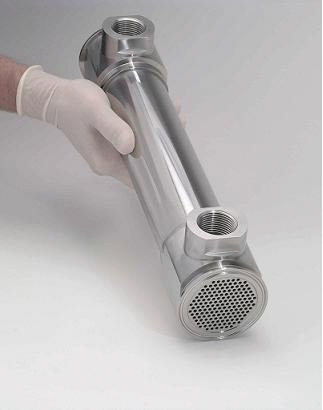 Steam injection heating for food products is a direct-contact process in which culinary steam is mixed with a pumpable food (or ingredient). Heating occurs when the steam transfers some of its internal energy to the food product. Steam gives up all of its latent heat of vaporization while condensing and, depending upon the system pressure, some of its sensible heat. Since the steam directly contacts the food product and the condensate becomes incorporated into it, the steam source must be culinary. Typical steam injection units are compact, inexpensive and simple to control. An example is provided in figure 3. 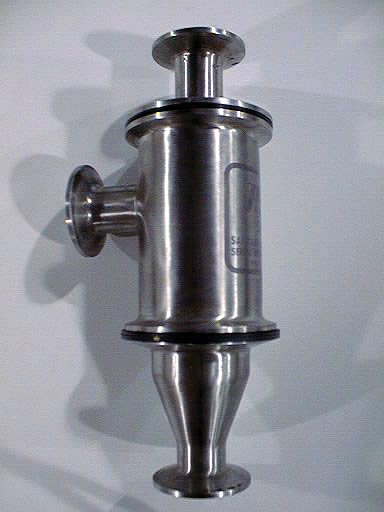 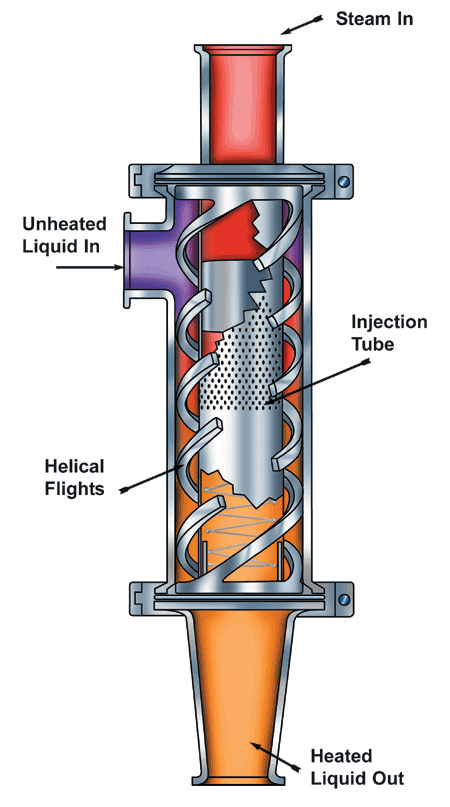 Steam infusion is another method of steam heating where the food product is heated by relatively low-pressure, culinary steam. A steam infusion device usually incorporates a chamber where the product is cascaded through a steam environment.

Steam sparging is common in open tanks or kettles containing liquid products or water. Culinary steam is bubbled into the liquid from nozzles located near the bottom of the tank.

A jacket, used to distribute steam over a wide surface area, consists of a thin space formed between two, parallel, metallic surfaces. Steam jackets are typically used to heat bulk products held in tanks and kettles. An example of a steam-jacketed kettle is shown in figure 4. Condensing steam, held captive within the jacket, transfers heat to the product in the kettle. A layer of insulation over the jacket protects operators and conserves heat. 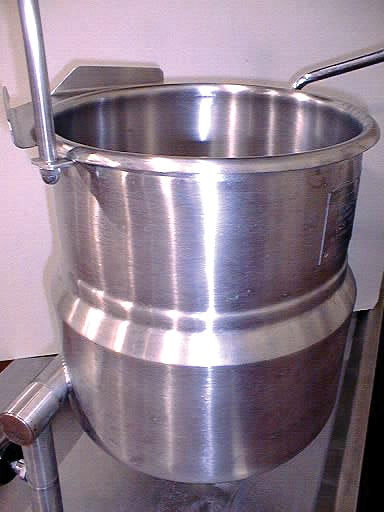 Drum dryers consist of one or more internally heated, metallic drums on which a thin, uniform layer of wet material is applied. In food processes, plant steam is often selected as the heat transfer media. An example of a drum dryer is shown in figure 5. 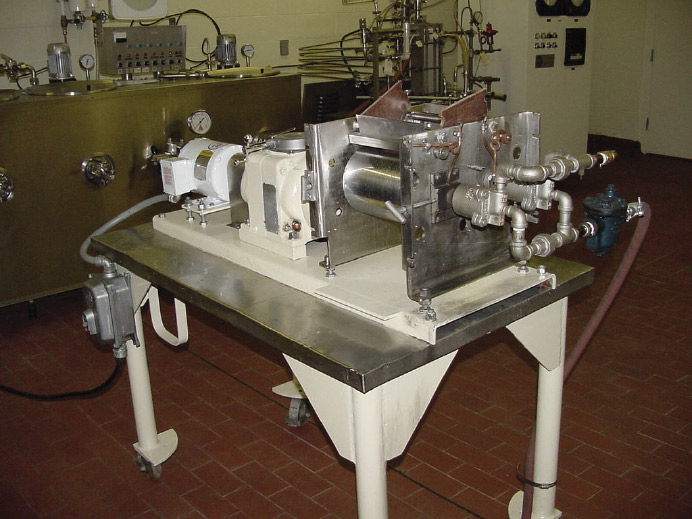 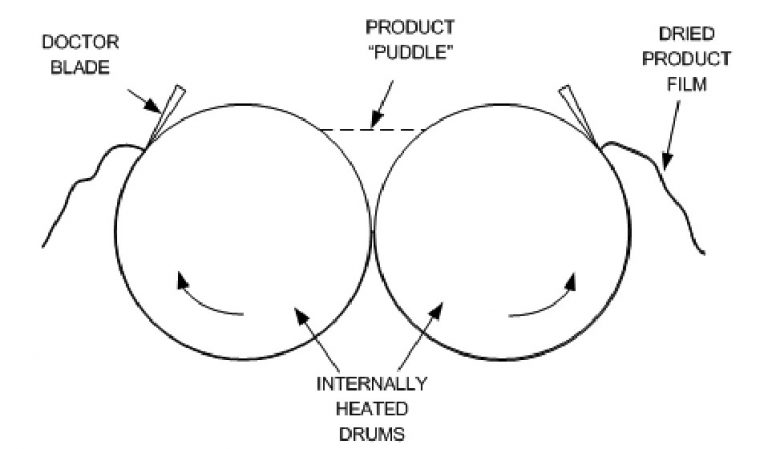 Certain drying and curing processes require humidification of the air surrounding the product to control the drying rate. Culinary steam can be injected directly into a drying chamber or into a ventilation air duct.

Plant steam is contained in various enclosures (such as tube coils or radiators) and used to heat air. 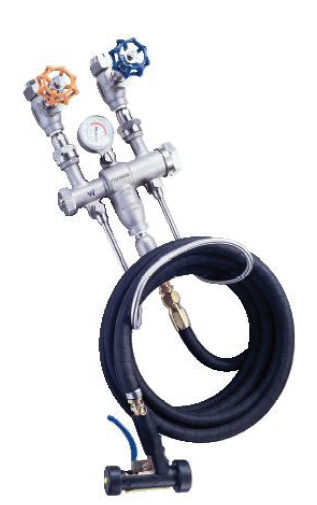 Figure 7 portrays simplified steam circuits typically found in a food processing plant. In diagram 7(a), condensate is recovered and returned to the boiler for reheating into plant steam. Diagram 7(b) shows a culinary steam injection system without condensate return. 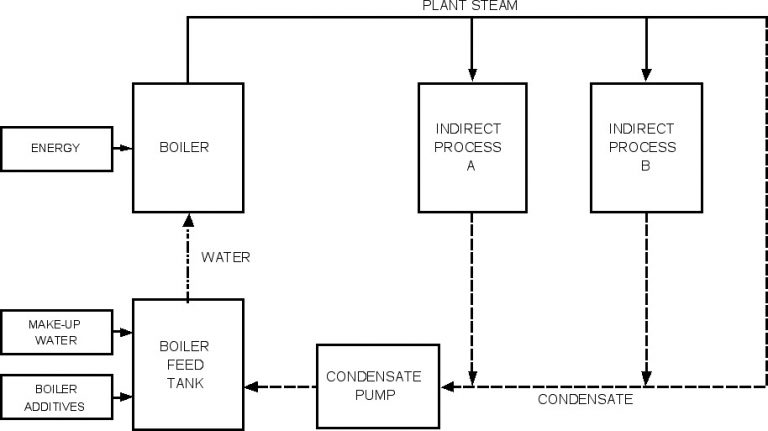 Important information to identify when estimating steam usage for a food process is given in table 1. Rough steam usage calculations are simple to make, when certain assumptions are made and the English system of units is employed. Numbers obtained using rough estimates are valuable for sizing equipment, pipelines and estimating capacity. Key simplifying assumptions are:

For more rigorous calculations of steam usage, see one of the many texts regarding this subject as applied to food processes (Singh and Heldman (1993), Henderson, Perry and Young (1997), or Toledo (1999))

Key equations for heat energy and steam usage calculations are:

Generally, piping codes form the basis for many state and municipal safety laws. In Oklahoma the codes of the U.S. National Standards Institute have been adopted (Oklahoma Department of Labor, 2000). Some piping installations may not be within the scope of any mandatory code, but it is advisable to comply with the codes in the interests of safety and as a basis for negotiations with contractors (Thielsch, 1996). Seek the services of a qualified, licensed contractor and/or professional engineer for system design and installation.

Condensate must be separated from steam in pipes. Since steam can travel very quickly in pipelines, it tends to carry droplets of condensate. One way to remove the water droplets is to install a condensate collection pocket in the pipeline. Steam separators (figure 8) are also used to remove condensate from steam. It is good practice to install steam separators in pipelines ahead of equipment or processes that require high-quality (low water content) steam. 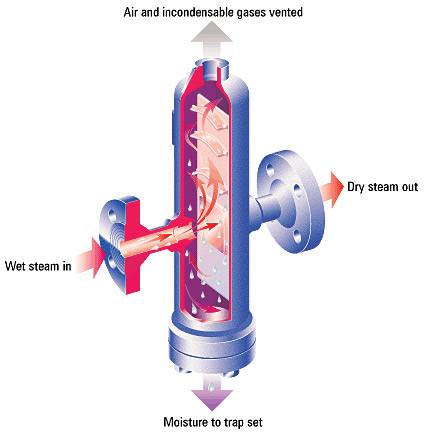 Insulation of steam pipes and equipment is useful to reduce energy losses and for safety reasons. Unfortunately in many food plants, insulation can become a harborage for pests and a clean-up and maintenance nightmare if not properly installed and maintained. In addition, certain types of insulation are susceptible to water absorption and loose their insulative properties when wet.

When designing steam systems, it is best to keep insulated lines high overhead where there is less chance for food products to contact insulation. Pipes that are frequently soiled by food products or require periodic disassembly may be left uninsulated, but should be guarded to prevent a burn hazard. For systems operating above 200°F, insulation contributes to worker safety. Outside surface temperatures must be limited to 125°F for highly conductive surfaces (metal) and 150°F for non-conductive surfaces (DOE, 1995). An insulation contractor or supplier can assist you in determining the required and most economical thickness of insulation. 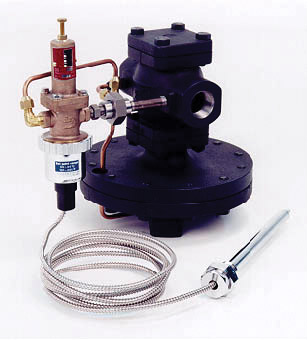 A steam trap is an automatic valve that senses the difference between steam and condensate and acts to allow condensate to pass through the valve. Steam trap selection can be a complex task that should be left to the professional. Nevertheless, owners need to understand the need for steam trapping and some of the basics mechanics.

Condensate must be removed from heat transfer equipment immediately to optimize process efficiency. Improper trapping and condensate removal can lead to water-logging, steam or air locking that will result in process losses. Steam traps should be fitted to the low points of equipment and piping to make use of gravity to remove condensate.

Condensate contains valuable heat that can be conserved by returning it to the boiler. The condensate may be pumped directly into the boiler or used as a heat source (e.g. to preheat boiler makeup water).

Air is present in equipment and pipelines before steam is turned on. Air continues to enter the system with the steam and mixes with it. Stagnant air-steam mixtures tend to settle out in time, with air dropping to the bottom of an enclosure. From this information, it should be understood that air vents must be installed at the end, or remote point of steam lines, before the line connects with any equipment. This allows the steam to push the air toward the vent where it can be removed. The same idea follows for the equipment. Equipment air vents should be located at a point farthest from the steam entry at a low elevation. Steam traps have varying ability to remove air, depending upon trap design, condition and installation. Each situation must be reviewed carefully to determine where pockets of air would tend to collect with regard to gravity, steam flow and equipment geometry.

A properly designed, installed, operated and maintained system will contribute immensely to steam conservation and efficiency. Operator training will ensure that operators do not contribute to steam wastage and will help them to identify and report potential problems. Maintenance technicians should be skilled in the trade of steam system upkeep and have sufficient diagnostic and repair tools available. A supply of spare parts should also be kept on hand to maintain important systems in peak running condition.

Steam provides a convenient means for transferring energy throughout a food processing plant. When properly engineered and installed, a steam system is reliable, safe and economical. A wide choice of fuel sources can be used to generate steam contributing to its flexibility as a heat transfer vehicle. Steam may be used for indirect heating of food products or may be directly incorporated in foods for heating using a wide array of commercially available equipment. In addition, steam can be used for non-food processing activities (e.g. space and surface heating) throughout the facility. Estimation of steam use is possible using simple mathematical equations. Finally, steam can be precisely controlled, helping to make processes consistent and repeatable.

Fad diets have grown in popularity in recent years. This is due to the rise in obesity, social media use and society’s pressure to be thin.