Fungicides are useful tools in managing foliar diseases of wheat. Positive return on fungicide investment is dependent on several factors, including yield potential of the wheat crop and disease reaction of the variety being grown. In Oklahoma, a foliar fungicide application has typically consisted of a single application somewhere between full flag leaf emergence (Feekes growth stage 9) to full head emergence, but prior to flowering (Feekes growth stage 10.5). A single application of a fungicide in enough water to achieve thorough leaf coverage (usually 15 GPA) between these growth stages and before disease is severe can protect a wheat crop with a high yield potential from losses to foliar diseases.

During the last couple of years, an alternative approach to using a fungicide to facilitate wheat production has been proposed. This approach involves applying a lower rate of a fungicide in late winter or early spring when the first or second node is detectable (Feekes growth stages 6 or 7) followed by a second fungicide application at a much higher rate later in the season between flag leaf emergence and flowering. A split application strategy can be beneficial as recently reported in the popular press. It is, however, very important to observe some significant commonalities among these articles. In order for split applications of fungicides to be effective, a lower rate of fungicide is applied early in the season followed by a higher rate later in the season. So, for a fungicide such as Quilt, this would mean applying 7 oz/acre early, followed by 14 oz/acre later, so the maximum cumulative amount of fungicide indicated on the label for a season (20.5 fl oz/A/season) would be applied.

It is also important to consider what the term “early” means in the world of fungicide application. An “early” fungicide tank mixed with topdressing will be done earlier than most of the studies reported. Growth stages 6 and 7, which correspond to the first and second nodes being visible at the base of tillers, generally occur in mid-March. This would be later than when topdressing should be done, so an additional trip across the field will be needed to apply the fungicide at GS 6 or 7. Also consider that a fungicide application at full strength provides protection from foliar diseases for approximately two weeks followed by a third week of partial protection. Hence, an early, lower rate application in January will not protect for as long as a higher-rate application, and may not be present at sufficiently high levels to inhibit infections by tan spot or septoria in late February or March. 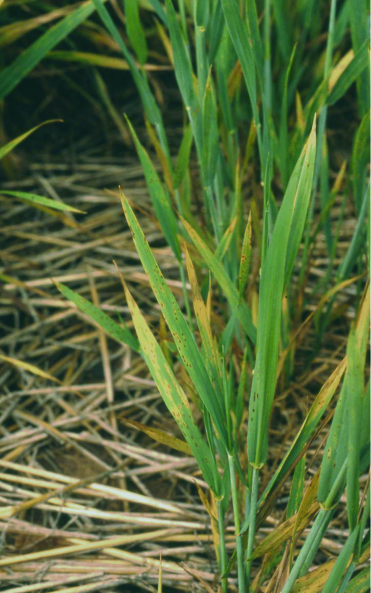 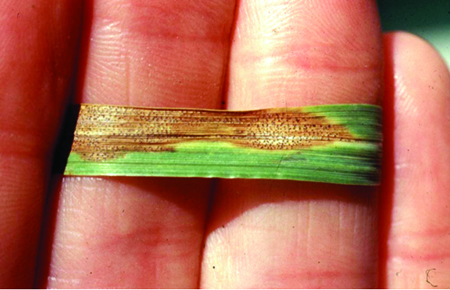 Figure 2. An infection of septoria on a wheat leaf. These infections also originate from residue as seen in Figure 1.

Another common element found among studies that have shown benefit to split fungicide applications is a low- or no-till production environment where tan spot and/or septoria leaf spots (Figures 1 and 2) are commonly encountered. Tan spot and septoria can be extremely detrimental to yield by killing leaves quickly and completely (especially on susceptible varieties in wet weather). Stripe rust (Figure 3) is another disease that can quickly and completely destroy leaves. Results from a trial in Louisiana in which split and single applications were used to control severe stripe rust have been published (Table 1). Note that the most important message from these data was to apply a fungicide rather than to split the application of a fungicide. 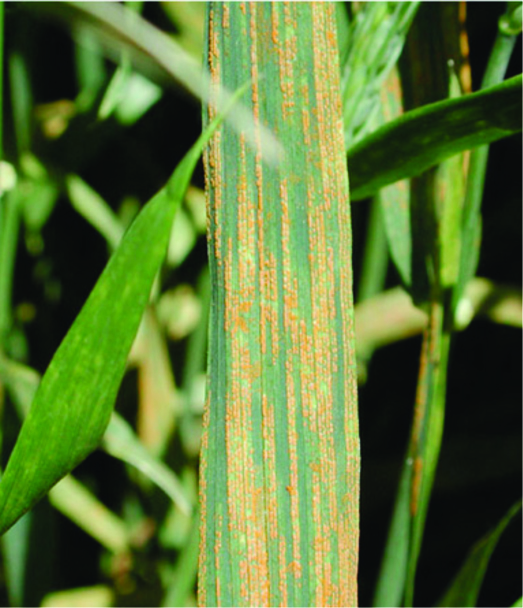 So, is there benefit to splitting the application for diseases such as leaf rust and powdery mildew in Oklahoma? As indicated in Table 2, the evidence is not as favorable as in some of the popular press articles. Examination of these data indicates that an early application of Quilt at growth stage 7 significantly reduced powdery mildew in the early season, but was not as effective in controlling leaf rust as a single later application at GS 10. Further, none of the treatments significantly increased yield over the non-treated check. Keep in mind that these yields were also greatly affected by heavy rain and lodging that was common in 2007. However, similar results were observed in 2006, an extremely dry year, and in 2008 which was an excellent year for wheat in Oklahoma (Table 3).

Table 2. Control of powdery mildew and leaf rust on winter wheat in Oklahoma using split and single applications of fungicide in 2007.

Table 3. Control of powdery mildew and leaf rust on winter wheat in Oklahoma using split and single applications of fungicide in 2008.

In summary, information available so far indicates that splitting a fungicide application may have the greatest benefit for wheat being produced in a low- or no-till system where a variety susceptible to tan spot and/or septoria has been planted. This is especially true in areas where spring wheat is grown as the overall season is much shorter than in regions where winter wheat is cultivated. With weather favorable for disease development in such a scenario, an early fungicide application may reduce early infection of lower leaves by inoculum coming from the residue. However, a second fungicide application at a higher rate also may be needed to continue disease protection later in the season. This approach may also be applicable to a disease such as stripe rust when “hot-spots” are found in a field in January or February. In contrast to this scenario, controlling powdery mildew and leaf rust may best be approached with a single application later in the season. These diseases usually do not kill leaves as quickly or effectively as tan spot, septoria, or stripe rust, and applying a single application of a fungicide before the disease becomes severe is a sound strategy.