Approximately one-fifth of the land area of Oklahoma is covered by forestland, and almost three-fourths of this land is capable of producing commercial timber. As an agricultural crop in Oklahoma, timber products rank third in value only behind wheat and hay. Osage orange (Maclura pomifera), mesquite (Prosopis glandulosa) and eastern redcedar (Juniperus virginiana) are some of the under-utilized invasive species in Oklahoma. Currently, they have very limited uses, such as shelterbelts and fence posts. This fact sheet summarizes some of the important properties of experimental panels made from particles of whole-tree chipped material of these species, as well as panels made from a mixture of 50 percent Osage orange and 50 percent eastern redcedar.

Bodark, bowwood, yellowwood and mock orange are some of the common names for Osage orange, which is native to Oklahoma, Arkansas and Texas. The sapwood of Osage orange is narrow and light yellow, but the heartwood is yellow to bright orange and becomes darker with exposure.

State biologists are now concerned that encroaching redcedar trees may someday take over the tall grass prairies in northern Oklahoma [1, 4, 5]. Acreage of eastern redcedar in Oklahoma, with the exception of the panhandle, exceeds seven million acres [4]. Use of low-quality eastern redcedar as a raw material in lumber manufacturing is not currently substantial due to its low value and irregular growth pattern. Currently, the wood from both eastern redcedar and Osage orange also is used for fence posts and novelty items, while the trees themselves are planted for shelterbelts and windbreaks.

Mesquite is another invasive species that adversely affects cattle and livestock production by reducing forage crops. Mesquite is a sprouting plant ranging from a shrub to a tree and is widely distributed along the Oklahoma and Texas border. The wood has a limited use for furniture, cabinets and game tables.

Low quality Osage orange, eastern redcedar and mesquite trees with diameters at breast height ranging from 4 to 7 inches were harvested in various locations in Oklahoma. All of the trees were chipped with branches and foliage intact using a commercial chipper. The chips were then reduced into smaller particles using a laboratory-scale hammermill. Figure 1 shows a commercial shredder converting low quality whole trees into chips.

Dried particles were screened to eliminate oversized particles. Raw material was then blended with urea formaldehyde (UF) having a solid content of 65.8 percent in a rotating drum-type blender. Based on oven dry particle weight, 8-percent UF resin was applied using an atomizing spray gun in a rotating-type blender as can be seen in Figure 2. No wax or any other additives were used for panel manufacturing. 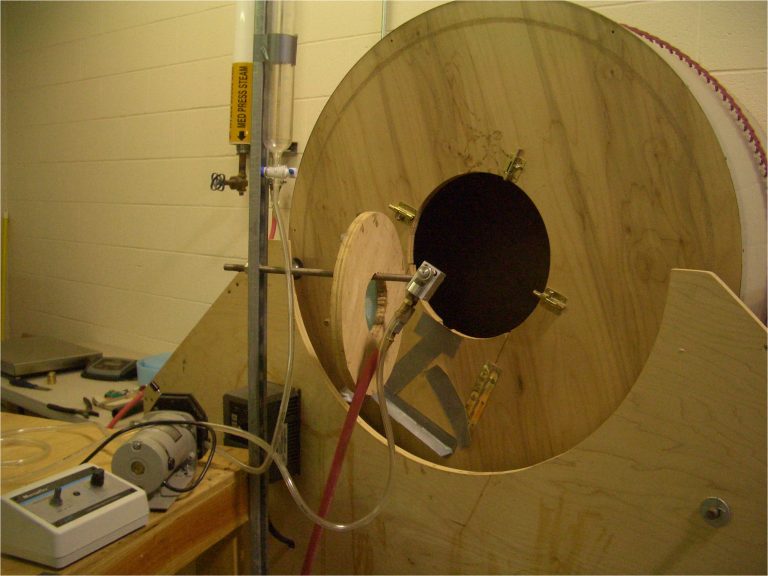 Experimental panels were manufactured in the Value-Added Wood Composite Laboratory housed in the Food & Agricultural Products Research and Technology Center (FAPC). A total of 20 single-layer mats, five for each type material with dimensions of 24 inches by 24 inches by 0.5 inch, were manually formed in a box. Mats on aluminum press cauls were pressed in a computer-controlled press at a temperature of 350oF and a pressure of 750 psi for 5 minutes. All panels were pressed to a nominal thickness of 0.5 inch, and their target density was 0.70 g/cm3. 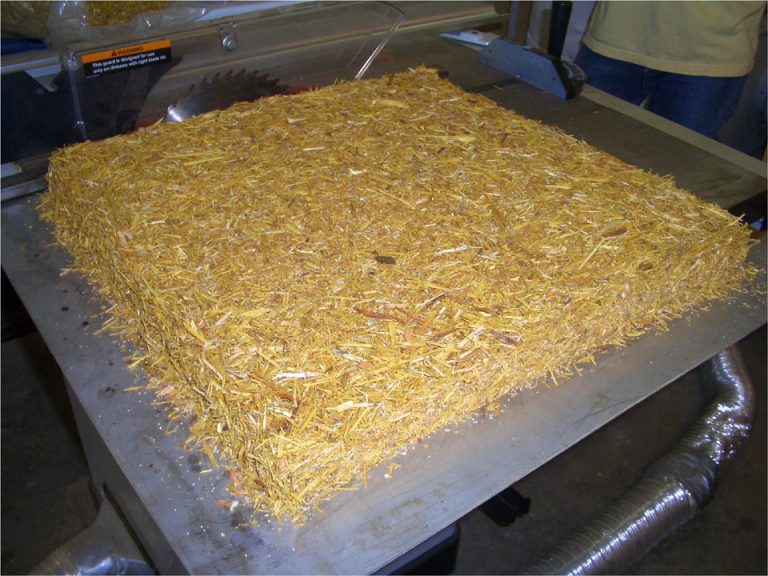 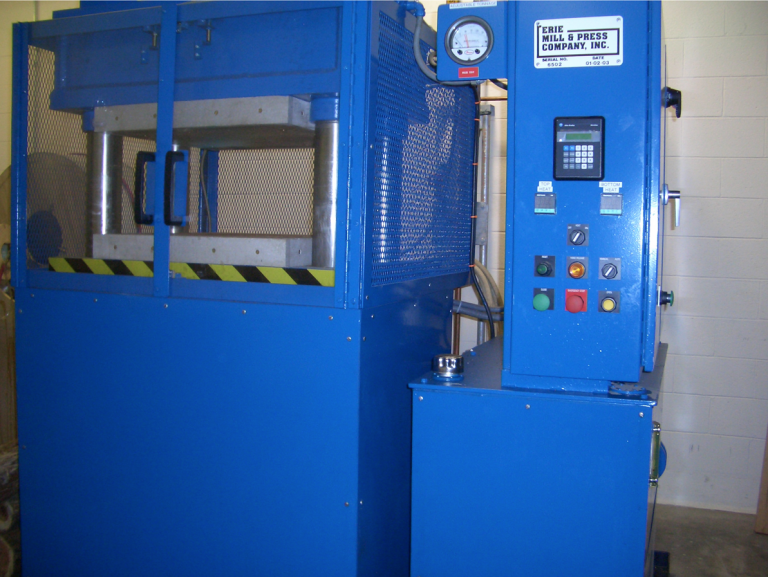 Two conditioned samples with widths of 3 inches and lengths of 20 inches from each panel were tested for modulus of elasticity (MOE) and modulus of rupture (MOR). Internal bond strength (IB) was determined using nine specimens of 2 inches by 2 inches from each panel. All of the mechanical strength properties of the specimens were carried out on a Comten Testing System, Model 95-VD equipped with a 1,000-pound loadcell (Figure 5). 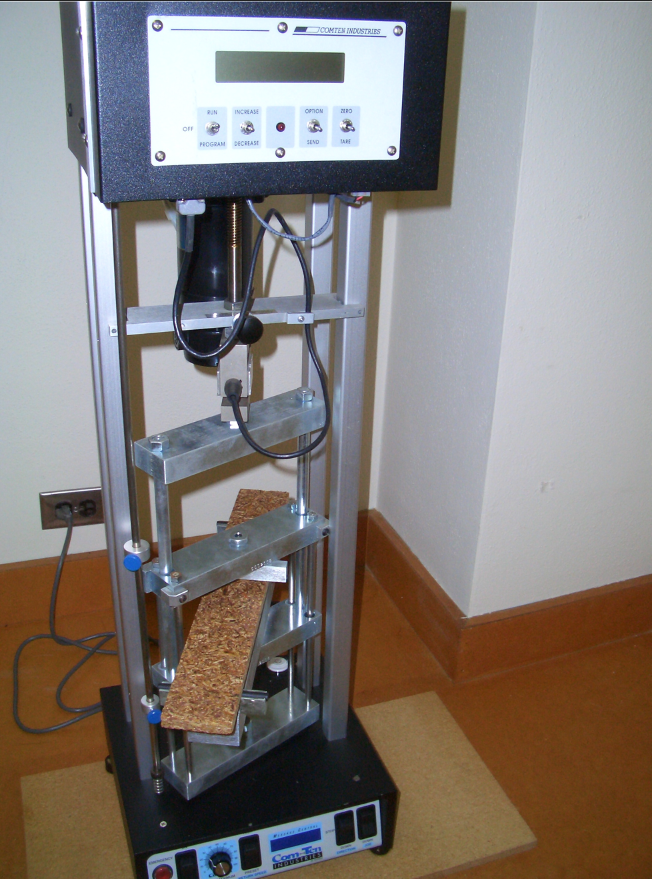 Two-hour and 24-hour thickness swelling of the boards  also were determined on two 6 inch by 6 inch samples per panel based on ASTM D-1037 procedures [3]. In addition to thickness swelling and water absorption properties of the samples, their surface roughnesses also were evaluated using stylus-type equipment.

Surface characteristics of the samples were determined by employing a fine stylus profilometer Model T-500. Various roughness parameters, such as average roughness (Ra) and maximum roughness (Rmax), can be calculated from the digital information. The definition of these parameters is discussed in detail in previous studies [6, 7, 8, 10]. Four random measurements were taken from each side of the samples to evaluate their roughness characteristics. Figure 6 illustrates the roughness profilometer used in this study. 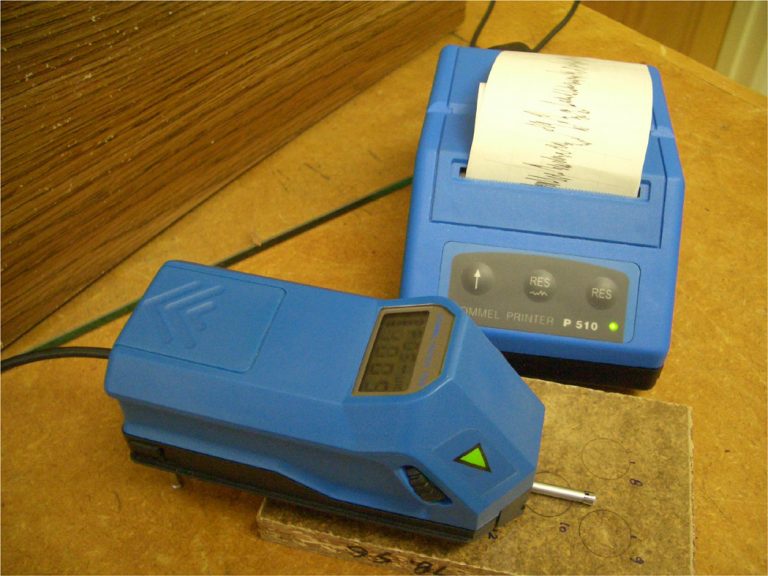 The results of both mechanical and physical properties of the panels made from eastern redcedar, Osage orange and mesquite are shown in Table 1.

Panels manufactured from 100-percent eastern redcedar had the highest bending and IB strength values followed by the panels having 50:50 mixtures of eastern redcedar and Osage orange particles. Average MOE, MOR and IB for eastern redcedar samples were 330,205 psi, 1,810 psi and 110 psi, respectively.

Two previous studies found MOE and MOR of whole-tree chipped particleboard samples ranged from 329,651 to 233,450 psi and 1,848 to 1,612 psi [5,9]. Osage orange and mesquite panels had comparable bending and IB strength characteristics as can be seen in Table 1.

Osage orange samples had 2.7 percent, 11.1 percent and 7.3 percent lower values than those of mesquite for MOE, MOR and IB tests. Reduced properties of both species may be due to low particle quality, high bark content and high foliage content in the furnish. Panels manufactured from a 50:50 ratio of Osage orange and eastern redcedar had improved mechanical properties as compared to those of 100-percent Osage orange and mesquite samples.

No appreciable differences in boards containing three species were found as evaluated by bending and IB strength properties. Based on ANSI A 28.1, 250,200 psi, 1,595 psi and 58 psi are minimum requirements for MOE, MOR and IB of particleboard panels for M-1 grade (medium density), respectively [2]. All panel types made in this study satisfied the bending and IB strength requirements, with the exception of MOR of osage orange samples. Overall, foliage content in the particles did not negatively affect the mechanical properties of the samples.

Two-hour water soaking resulted in thickness swelling ranging from 15 to 17 percent as shown in Table 1. Although no wax was used in the panels, none of the samples crumbled nor was there any separation between particles even after drying the specimens at room temperature for two months.

Eastern redcedar had an average Ra value of 17.64 µm while Osage orange had an Ra value of 13.11 µm, which was the lowest among the four types of panels. A typical commercially manufactured particleboard could have Ra values ranging from 3 µm to 6 µm [7, 8].

Therefore, the roughness measurements of the samples suggest surface quality of all of the panels was found to be very rough and not ideal for overlaying applications as substrate. Manufacturing 3-layer panels using fine material on the face layers could be considered to improve their surface quality.

Foliage content did not substantially reduce properties of the panels. Based on the findings, low quality Osage orange, eastern redcedar and mesquite can be used as whole-tree furnishes to manufacture particleboards.

Process directly addresses the development of value-added panel products from such under-utilized local species and would provide a value-added economic incentive to convert a costly land management problem in Oklahoma into marketable particleboard panels.

3- American Society for Testing and Materials (ASTM). 1996. Method D-1037. Evaluating the properties of wood based fiber and particle panel material.

Forest Ecology, Management & CareForest HealthForestry
VIEW ALL
Back To Top
Back To Top
©