The Oklahoma Quality Beef Network (OQBN) is a program, which began in 2001, and is sponsored by the Oklahoma Cattlemen’s Association. OQBN is a process verification and certification program for preconditioning calves. Preconditioning programs are designed to reduce stress from shipping calves at weaning, improve calves’ immune system, and boost performance in post-weaning production phases (stocker production and cattle feeding) and carcass performance (higher grading carcasses with fewer defects).

Visit http://osuextra.okstate.edu/ for information on preconditioning, and also visit the Oklahoma Cattlemen’s Association Web site at http://www.okcattlemen.org/OQBN%20Home.htm for specific information on several aspects of the OQBN program.

One frequently asked question regarding preconditioning and the OQBN in particular is whether or not buyers pay a premium for OQBN calves. This extension fact sheet reports on research at OSU to estimate price premiums for the first thee years of the OQBN program (Ratcliff).

Table 1 provides a summary of OQBN sales since the first sale in 2001. Sales were held primarily from October to December each of the three years (2001 to 2003). Number of sales per year has changed little. However, the number of OQBN sale lots and number of head declined in 2002 and again in 2003 compared with the first year. Livestock markets sponsoring OQBN sales included the following locations: Apache, El Reno, Enid, Holdenville, Idabel, Tulsa, Woodward, and Welch.

In 2003, the third year of the program, 221 OQBN sale lots were sold in eight fall sales throughout Oklahoma. Sales totaled 4,169 head of calves sold, an average of 18.9 head per sale lot.

At each of the OQBN sales, Oklahoma Cooperative Extension Service educators and specialists collected specific data on the calves sold. Data collected consisted of lot size, average weight, sex, breed or breed group, muscle score, frame size, condition or fleshiness, horn or polled status, uniformity, health, and how the calves had been managed regarding weaning and vaccinations. Data were collected on the OQBN certified calves sold and a large number of calves sold at the same sales that were not managed in accordance with the OQBN protocol.

Considerable previous research has estimated the value of various cattle attributes with market data, including research in Oklahoma (Smith et al.). Most of these studies were reviewed in a recent article (Avent, Ward, and Lalman) along with a discussion of those traits that are typically affected by a preconditioning program. Cattle characteristics affected by preconditioning programs include sale weight, sex (castration of bull calves), horns (dehorning if calves are horned), condition, and health. In some OQBN sales, calves are sorted into larger, more uniform sale lots, thus uniformity and sale lot size may also be affected.

The first method of estimating price premiums (if any) for calves following the OQBN management protocol followed the method traditionally used in many previous studies. The variation in sale prices for calves was explained by sale lot size and the series of cattle characteristics (described above), along with the manner in which calves were handled regarding weaning and vaccinations.

The focus of this research was on the price premium (if any) buyers paid for calves managed according to the OQBN preconditioning protocol. Before presenting results, some preliminary comments are necessary. First, only results for the management variables are presented in this fact sheet. Results for most cattle characteristic variables and lot size variables were generally consistent with previous research though differences were found, not unexpectedly, from one sale to another. Selected additional results will be presented later. In the tables, livestock markets and locations are not identified. This research was not intended to compare one market with another though some market effects are discussed later also. Thus, caution must be exercised in drawing conclusions about sale location from these tables. For example, sale location A in 2001 is not necessarily the same as location A in 2002 or 2003. The same applies to all other sale locations.

Results of the first method for estimating the OQBN premium at each sale are presented in Table 2. Numbers represent the premium paid for OQBN certified calves. Numbers with a negative sign mean OQBN-managed calves sold as a discount to calves sold in that respective management group. Zeros mean there was no significant difference for that respective management group vs. OQBN-managed calves. All results in Table 2 are after accounting for sale lot size and calf traits that affect prices paid by buyers for calves (weight, muscle score, frame size, etc.).

Several points can be made about the results presented in Table 2.

Figure 1 shows the average annual premium for OQBN-managed calves versus the other management groups. Most premiums increased in 2002 and 2003 compared with the first year but the number of observations for any one group and year was small in several cases. In each year, there was at least one sale in which another management group received a premium compared to OQBN calves. These appear to be unique to a given sale, not indicative of a trend or recurring pattern, and not easily explained by the data collected for this analysis. 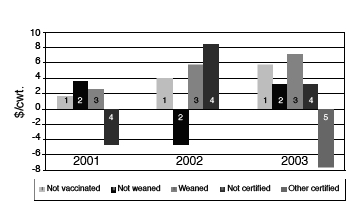 As mentioned above, preconditioning programs affect certain calf characteristics. These are briefly summarized below (Avent, Ward, and Lalman).

Thus, each of the above factors can affect the sale price for calves. An alternative method for estimating price premiums compared sale lots that met specific criteria to those that did not. The criteria for the OQBN group was selling 10 head or more of calves managed under the OQBN protocol, meaning there were no bulls, no calves with visible horns, all calves were healthy, and calves were sold in uniform lots.

Results for the second method of estimating the OQBN premium at each sale are presented in Table 3. Numbers represent the premium paid for calves sold in the management group with the specific OQBN criteria compared to all other sale lots managed in some other manner. Zeros again mean there was no significant difference for lots with the specific OQBN criteria and lots with calves managed in some other manner. All results in Table 3 are after accounting for calf traits that affect prices paid by buyers for calves (weight, muscle score, frame size, etc.).

Again, key points can be made about results presented in Table 3.

Figure 2 compares the annual average premiums for each of the two methods for each year of the OQBN program. As noted, the second method showed larger premiums. The simple average premium over the three years for method one was $3.42/cwt. compared with $5.85/cwt. for method two. Readers should note that the second method requires following the OQBN protocol and marketing calves in uniform lots of 10 head or more. 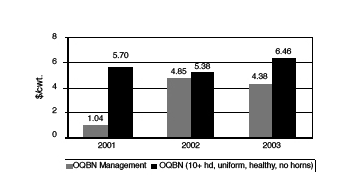 Notes: NA means there were no observations in this management group at this sale. 0.00 means no significant difference. No sign before the number means there was a premium for OQBN certified calves of this amount.

Managers of livestock markets sponsoring OQBN sales managed them somewhat differently. In most but not all sales, the sale began with the normal consignments of livestock at that specific sale location. Then the sale was stopped and it was announced the next segment of the sale would be OQBN calves. After all OQBN lots were sold, the sale resumed with the normal run of remaining livestock. Calves were commingled into uniform sale lots in some sales but as a general rule commingling was not done. Some livestock market managers more actively promoted the OQBN sale at their market than others. As a result, sale volume of OQBN calves varied widely from sale to sale.

Evidence from data collected for the first three years of the OQBN program suggests livestock market managers can influence the extent of the premium paid for OQBN-managed calves via the volume of OQBN-certified calves sold at that sale. Consider Figure 3, which plots the three-year (2001-2003) volume of OQBN sale lots (read from the left axis) at eight sale locations and the average premium received at those sales based on method two (read from the right axis). OQBN sale lot volume is plotted for the eight sale locations from lowest to highest. Then the average premium estimated for each corresponding sale is plotted on the other line. There appears to be a direct relationship between volume of OQBN sale lots and the size of the premium buyers paid for OQBN-managed calves sold in sale lots of 10 head or more. 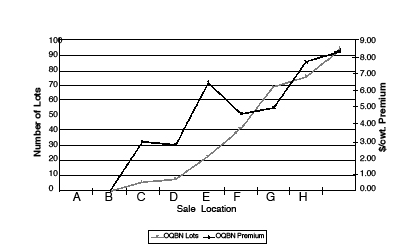 Figure 3. Relationship between number of specifically defined ) OQBN sale lots and the estimated OQBN premium for 2001-2003

How do estimated premiums for calves sold through the OQBN program compare with previous research estimating preconditioning calf premiums? Estimates here are compared with another OSU study and a continuing estimate of premiums from a satellite auction.

A series of price premium estimates have been conducted annually for preconditioned calves marketed through Superior Livestock Auction for the past nine years, 1995 to 2003 (King and Seeger 2004a). Two significant trends have emerged from the data. First, the percentage of sale lots that correspond closely to the OQBN protocol has increased significantly from 3% in 1995 to 22% in 2003. Second, the premium for these preconditioned lots has increased also. Premiums were estimated in a model similar to the “traditional” approach taken in the OSU study reported in this fact sheet, thus accounting for many factors that affect feeder cattle prices (lot size, weight, breed, fleshiness, frame score, etc.). The price premium estimated in 1995 was $2.47/cwt. but has steadily increased to $6.69/cwt. in the most recent year, 2003. It might be noted that no effort was made to adjust the price premium for the change in feeder calf prices over the nine-year period.

Average OQBN premiums estimated by the traditional method were similar to but slightly lower than those estimated in other studies compared here. One reason may have to do with reputation and experience. Preconditioning sales in other studies began earlier and have continued longer than those in Oklahoma. Also in other studies, all data came from a single sale site. As noted above, how a livestock market manager promotes and manages the sale appears to make a significant difference in the volume and premium for OQBN-certified calves. Sale lots in the Superior Livestock Auction were much larger (a minimum of truckload size) than in sales throughout Oklahoma. This may have affected the premium for preconditioned calves, even though King and Seeger accounted for differences in lot size in the Superior Livestock sales.

Research has shown that building a positive reputation takes time. Buyers must go through a twofold learning process if they have not been accustomed to purchasing preconditioned calves. First, buyers need to have confidence in the OQBN certification process. Sellers and those certifying the calves must manage the calves and attest to managing the calves in accordance with the OQBN protocol. Specifications must be followed to the letter or the integrity of the entire program suffers. Second, buyers may not understand initially and must learn the added value of having preconditioned calves in a stocker program or in the feedlot. Healthy, high performing calves are more valuable to stocker operators and feedlot managers than less healthy, lower performing calves.

Thus, building confidence and the buyer learning process takes time. The more buyers who have good experiences with OQBN-certified calves and the more trust they have in the certification process, the more competitive bidding will be among buyers. The combined result is an increased likelihood, but no guarantee, of higher premiums for OQBN calves in the future.

Key findings from OSU research were: