A 2018 study was initiated at the McCaull Research and Demonstration farm in the Oklahoma Panhandle to evaluate corn yield response to pre-plant applied nitrogen with different irrigation rates based on evapotranspiration (ET) replacement. The irrigation rates were 1 inch (80 percent ET), 1.25 inches (100 percent ET), and 1.5 inches (120 percent ET) approximately every five days. The resulting yield data was used to provide estimates of economic returns as a function of gross revenue and variable costs. This large, field scale project provides valuable insight into the benefits of optimizing N and irrigation management to improve profitability and sustainability of irrigated corn production in the Panhandle.

In 2018 a large scale field trial was initiated at the McCaull Research and Demonstration Farm located in northern Texas County, OK near Elkhart KS. The study was conducted on a 125-acre pivot where pre-plant nitrogen was applied at rates of 100, 150, 200, 250 pounds nitrogen per acre-1 as anhydrous ammonia plus 100 pounds of a blended fertilizer containing 12 percent nitrogen, 40 percent P2O5, 10 percent sulfur and 1 percent zinc. These treatments were applied in three replicated strips around the pivot between wheel tracks 4 and 7 (Figure 1). A 16-row commercial strip till applicator, with 20-inch row spacing was used to apply these treatments March 23. This allowed for the five nitrogen rates to be located between pivot tracks. The zero anhydrous ammonia check strips received 100 pounds per acre-1 of the blended fertilizer and were located towards the center of the pivot instead of within the replicated area to allow for more replicated fertilizer nitrogen treatments within the main study for a higher resolution assessment of nitrogen response at the top of the yield curve. Irrigation was applied at 1-inch, 1.25-inch and 1.5-inch application rates such that the 1.25-inch treatment served to replace 100 percent crop ET with a minimum return interval of 4.9 days to simulate 3.8, 4.8 and 5.8 gallons per minute acre-1 irrigation capacities. The amount of irrigation water applied was manipulated for each treatment by adjusting pivot speed. These irrigation treatments were applied in 18-degree slices of the pivot overtop of the nitrogen rate strips to provide four replicates of each irrigation treatment (Figure 2). 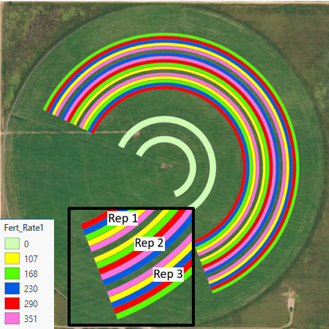 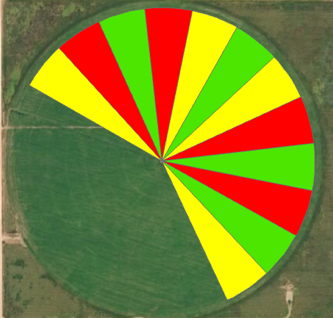 The data show that optimum yield could be achieved with the 17 inches of irrigation applied in the 1-inch treatment, which supplied approximately 80 percent of crop ET. The ET reported at the Eva station for this corn crop was below the 15-year average ET reported at the Goodwell station (40 inches). This, combined with in-season rainfall, which was 2.4 inches above average, can further explain the relatively low amount of irrigation required to optimize yield. Furthermore, many research findings in the regions have shown that 75 to 85 percent of ET replacement is sufficient to optimize irrigated corn yields.

Figure 5 shows the revenue based on $4 corn price minus the variable costs. The data show that there was very little or no return on investment for nitrogen fertilizer at nitrogen rates above 200 pounds nitrogen per acre-1. Furthermore, it shows that the 1-inch treatment, which supplied 80 percent of crop ET provided for optimum revenue over variable costs with $300 revenue-variable cost, whereas the 1.25-inch treatment provided $260 revenue-variable cost per acre. It is important to note that this research was limited because only the speed of the pivot could be changed to alter the irrigation applied. This is why the different depths were used. A similar financial outcome could have most likely been achieved by reducing the frequency of the 1.25-inch application so it provided for 80 percent of ET replacement.

It is interesting to note that the 1.5-inch treatment did not decrease yield response to nitrogen in the fertilized treatments. This suggests that in this one year of data, the irrigation applied in excess of ET did not cause sufficient leaching to decrease availability of the pre-plant applied anhydrous ammonia.

Figure 5. Revenue (based on $4/bu corn price) minus variable costs as a function pre-plant anhydrous ammonia applications under 3 irrigation regimes at McCaull R&D farm in 2018.

Corn yield response was unaffected by the amount of irrigation water applied in this study. In fact, yield was unresponsive to irrigation treatments imposed because the 1-inch treatment provided irrigation capacity sufficient to supply 80 percent of ET which was sufficient to optimize grain yield. The excess water supplied by the 1.5-inch (120 percent of ET) irrigation treatment apparently did not cause detrimental leaching of the pre-plant anhydrous nitrogen applied in this study. Economic returns were optimized with the 1-inch irrigation treatment receiving 200 pounds nitrogen acre-1; first because of reduced pumping cost; and secondly because the added revenue resulting from the yield maximized with 300 pounds nitrogen per acre-1 was insufficient to pay for the additional nitrogen and harvest costs associated with this fertilizer treatment.

Thanks to Daren Buck for his support of our efforts at the McCaull Research and Demonstration Farm. He and his personnel not only helped by fertilizing, planting and harvesting these plots, but also provided a great deal of guidance in the management plan for this field scale project that supported its success.

A report on the 2021 corn performance trials across the Oklahoma Panhandle.

Equipment & Structures for Farms & RanchesEquipment for Farms and RanchesInsects, Pests, and DiseasesIrrigationIrrigation ManagementPesticidesWater
VIEW ALL
Back To Top
Back To Top
©